My experience with the Uncharted games is limited to the first and final games. When I was a young PFC, I purchased a PS3, and it came with the first Uncharted. It was a fun romp and more than I expected from a free game. Later, when I grabbed a PS4, it came with the last Uncharted, a fun game that I never finished. I enjoyed the series, but I’m far from a super fan. When the movie popped up, I gave it a meh and moved on, but my oldest kiddo insisted we see it, so here we are. 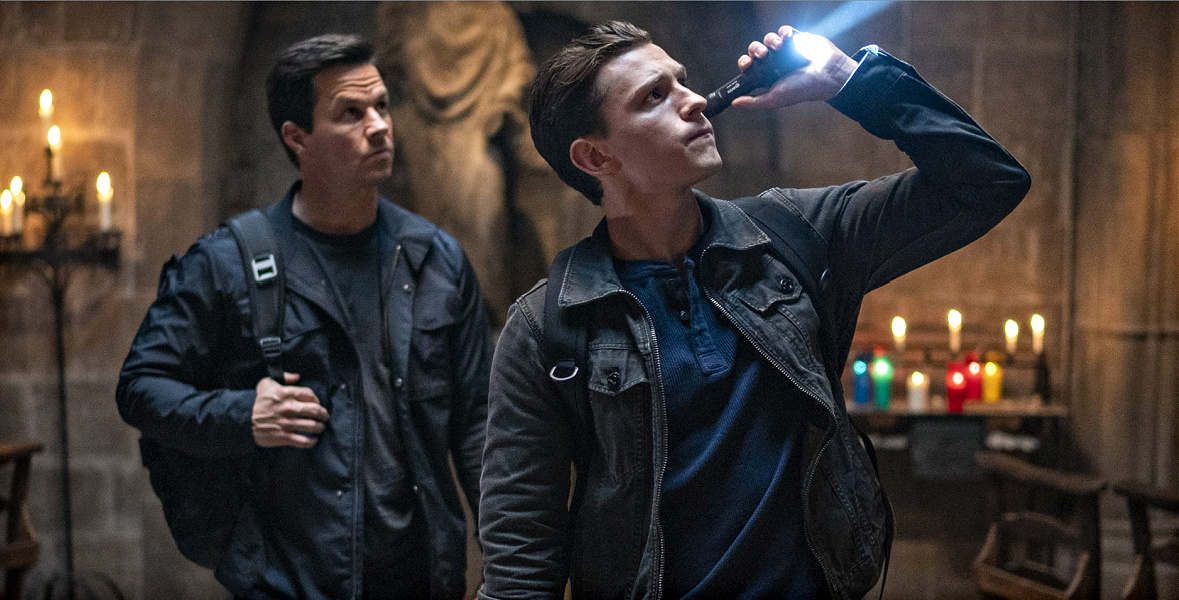 Movie adaptions of video games are rarely, if ever, good. Remember the Super Mario Bros. movie? Well, it hasn’t gotten much better since then. Sometimes animation does it right, but live-action rarely does justice for a video game. With that being said, Uncharted isn’t necessarily a terrible movie but my first instinct of ‘meh’ was about right.

The games themselves relied on the inspiration from movies like Indiana Jones, and heck, even the Mummy series, and of course, the old serials about adventurers in foreign lands. So, the story isn’t a new one, but the games applied a style that made Uncharted its own thing. A lot of that world’s feel comes from the characters and their interactions, and we just don’t get that with this film.

He keeps Drake’s wit but doesn’t have the character’s world-weariness. He seems innocent and silly. He doesn’t have those instincts that kept Drake alive through all the crazy situations he’s faced. Even though Drake is younger in the film, we should see some of that.

The same could be said about Sully and Mark Walhberg. He’s not playing Sully, he’s playing Mark Walhberg. The relationship between the two of them doesn’t feel like father and son, but more like an older annoyed brother and younger annoying brother. They have great chemistry, though, and work well off each other.

Chloe, played by Sophia Ali, is probably my favorite character. She’s brash, confident, and smart. She captures the Chloe character fairly well and plays off Mark and Tom excellently.

From Playstation to Big Screen

The Uncharted games are all about finding treasure and the overall plot of the film keeps to that. They are a spunky ragtag crew racing against a team of bad guys to find the treasure.

From here on out, you’re getting spoilers.

In the beginning, the plot is great. The Magellan expedition was fictionally funded by the Moncada family hundreds of years ago and Drake and Sully want to find Magellan’s lost treasure.

The villain of the story is the last descendant of the Moncada family, played by Antonio Banderas, who also wants the treasure. His reason for wanting the treasure goes beyond greed. It’s his family legacy. He hires a team of mercs, led by a badass, knife-wielding henchwoman named Braddock, to find the treasure first. However, for some reason, the filmmakers decided to have Braddock betray and murder Moncada. Now our charismatic villain is replaced by generic mercenaries whose motivation is just greed.

In the Uncharted games, we explored ruins, jungles, and temples. In the film, we don’t see a whole lot of that. They steal some stuff from an auction, traipse around Barcelona a little bit, and even have a fight in a Papa Johns’s. There is a little bit of exploration of the ruins under Barcelona, but not a lot.

Tom Holland got in impressive shape for the film and we do see Drake doing a little parkour. It’s neat to see but works more as a throwback than a plot device. However, his agility keeps him alive in a few situations. The movie tosses some basic puzzles at the cast, but again, it’s more fan service than plot-driven.

We also get very little gunplay.

The games features tons of guns, most of them being real-world weapons. In the film, it seems like only the bad guys really use guns. We see some generic mercs with rifles and even a cameo by the CZ Scorpion.

Nathan gets his classic shoulder holster, but he only uses the gun for about three seconds. Literally, if you blink, you’ll miss it. The shoulder holster becomes like the parkour and puzzle-solving. It’s just a bit of fan service.

What Could Have Been

By the end, we have this giant green screen battle going on that’s just boring. It doesn’t have stakes, and it’s the eight millionth giant green screen battle we’ve seen. The film simply doesn’t capture the feel of the Uncharted games. It doesn’t capture the same adventure/history movie feel we get from Indiana Jones, The Mummy, or hell, even National Treasure, either.

I can’t help but feel that reducing the budget, eliminating the giant green screen finale, and making this a smaller, stunt-driven movie might have been the way to go. Give me more tortures and fistfights and less flying through the air. Keep the villains turned up to 11 and make them menacing and enthusiastic.

Give us a temple to explore with traps, nearly impossible obstacles, and room for Drake, Sully, and Chloe to bicker and argue, but team up too. Toss in some more history and make Nathan excited not just about the treasure, but the setting, the history, and the adventure. In a video game, it’s truly not about a destination but the ride to get there. Give us that ride.

The Uncharted production has good bones, but it’s painfully generic, and that’s its biggest fault. Don’t give me a Tom Holland adventure movie. Give me Nathan Drake in Uncharted.