If you’re into revolvers, chances are you’re at least somewhat familiar with the British Webley. It’s a cool break open design, chambered in .455 Webley, that served well in the first half of the last century. But you may not be aware of a Webley revolver variant designed by a guy named George Fosbery which was dubbed the “Webley automatic revolver .” Fortunately, Ian McCollum of Forgotten Weapons got his hands on a Webley–Fosbery automatic revolver and gives us the lowdown.

George Fosbery was a retired British Army Colonel who had won the Victoria Cross, Britain’s highest award for gallantry while serving in India as a Lieutenant in 1863. Interestingly, Fosbery is the only VC recipient to have won his award while carrying a weapon of his own design, sort of. He had actually designed the exploding rounds that his unit, the 4th Bengal European Regiment, carried in their rifles. The Webley Fosbery Revolver was still four decades in the future at that time.

The Search for a New Kind of Sidearm

The first decade of the twentieth century saw a worldwide search for a suitable semiautomatic pistol as the standard-issue sidearm for military service. Even in those early days, there were plenty of contenders. The only problem, as Fosbery saw it, was that most of those weapons were chambered in relatively small calibers, such as the 7.63mm Mauser used in the iconic Mauser Broom Handle pistol. Fosbery thought it would be better to have a sidearm with more stopping power, so he adapted the Webley, with its .455 round, the British Army standard, to a semiautomatic configuration. But it wasn’t really semiautomatic, even though it was misleadingly called “automatic,” as many autoloading pistols have been through the years.

Webley Fosbery Revolver: A New Twist on an Established Design

Being based on the Webley revolver, Fosbery’s pistol breaks open for loading and unloading and has a capacity of six rounds in the cylinder. It is a single-action-only pistol, but it’s self cocking by way of a recoil-operated reciprocating top frame, which rotates the cylinder and cocks the hammer upon firing.

It’s one of the few revolvers to feature a safety, which is a thumb-operated lever on the left side of the lower frame. The safety locks the upper frame slide and the trigger mechanism. It will also lock the hammer to the rear if desired.

A Webley Fosbery, chambered in .45 ACP, was tested by the US military during the 1907 pistol trials which eventually chose a John Browning design that would become the M1911. Probably a good choice right there.

Still, Fosbery’s pistol did well, considering its limitations. It outperformed most other designs in the rust test, and it operated as advertised. But the upside was very limited, considering that it had a capacity ceiling of six and, despite being billed as “automatic” or even semiautomatic, it still had to be broken open and manually reloaded. It didn’t eject cartridges and certainly had no convenient magazine, as did the 1911.

The only real improvement it offered over other revolvers was a double-action function, thanks to the reciprocating slide, with the light, crisp trigger pull of a single action. Not much of an advantage when put alongside the 1911. The US military also thought the gun was too heavy and bulky.

Not Much Luck at Home

The Webley Fosbery was never adopted by the British either, though it saw service in World War I because British officers of the day were expected to provide their own sidearm, with the only requirement being that it had to be chambered in .455 Webley.

Many officers chose Fosbery’s gun as their sidearm. Some, probably, because it is undeniably cool. Those that did, however, likely regretted it. The tight tolerances of the slide mechanism made the gun susceptible to fouling in muddy conditions, and if the WWI trenches were anything, they were absolutely giant mudholes. The legendary German Luger suffered from the same problem. Fantastically cool pistol, but not a great service sidearm. Being recoil-operated, the Webley Fosbery also required a stiff grip to keep it from short stroking. No limp wristing allowed.

Fosbery’s pistol was, however, quite popular with target shooters of the day. It offered a full-size military cartridge coupled with the reduced recoil of a self cocking system and light trigger. It has some cool features inside too. Early versions featured a removable cylinder, though that quickly went away.

There is also a small spring-loaded block on the upper strap that protrudes when the gun is broken open. The block keeps the cylinder from rotating when reloading and makes sure that, when the gun is closed again, the track on the upper frame is lined up with the operating recoil lug in the bottom. Ian compares it to having to make certain the bolt on an M-60 machine gun is lined up right before closing the top cover. Finally, similar to a modern semiauto pistol, you racked the slide to cock the gun, or you could just pull the hammer back.

All in all, the Webley Fosbery is a cool piece of history that was just a little behind the times in its development. A decade earlier, it might have been all the rage, but by the first decade of the twentieth century, guys like John Browning, Georg Luger, and Carl Walther were looking to the future. 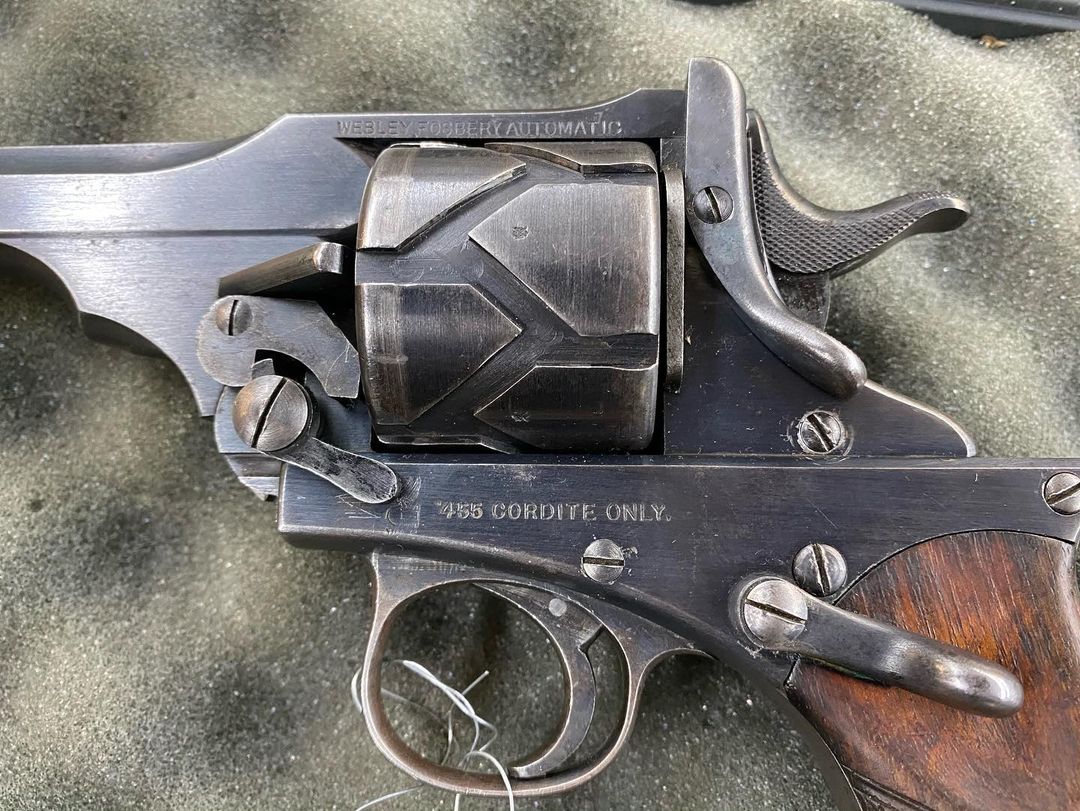 Here’s a close-up of the cylinder showing off some more of the details of this antique piece of history. Photo credit to @Richard_moviearms

One last Webley for the road, here it is again wide and turned over the other side. Photo credit to @Richard_moviearms