The Bondurant Racing School is all about what they call “high-performance driving”. Though that typically leads people to think of racing and other automotive competitions, there is far more to it than that.  In that respect, it’s very similar to what LE agencies and PSD organizations refer to at EVOC, or “Emergency Vehicle Operations (Course)”. It’s referred to as “Emergency Driving Skills” by Offgridweb.com. For the purposes of this article, we’ll just call it tactical driving. Not in the paint-it-black-call-it-high-speed context of the word, but in its actual application.

Dealing with an unhinged driver on the road. Fleeing a natural disaster. Navigating urban unrest and all the obstacles such an event produces. And yes possibly also dealing with an opponent who is either armed or willing to use a vehicle for deadly force.

Some of the crew from OFFGRID (Tom Marshall, Patrick McCarthy, and Steven Kuo) recently attended the Bondurant Racing School; what they learned was later reflected in Marshalls’ article The Will to Drive.

As Marshalls say, setting up his “lessons learned”,

For our first exercise, about half our class piled into a 12-passenger van. An instructor got behind the wheel and proceeded to drive the full length of the track at highway speed. While the author nearly lost his lunch sitting all the way in the back, we all learned a very valuable point: lessons learned from high-performance driving aren’t restricted to high-performance vehicles. Said lessons involve much more than speed. In fact, most of what we learned had more to do with vehicle handling. Specifically, how to maneuver your vehicle to create an advantage across a wide array of potential emergencies.

Our time at Bondurant was spent immersed in their three-day Executive Protection Driving program. This is a class that Bondurant has taught to private protection teams, special operations units, and law enforcement groups. While the class is grounded in the foundations of performance driving, it included additional material designed to help cope with some in-extremis situations you might encounter behind the wheel.

Marshall and crew discuss the Reverse 180 (or J-Turn), the Precision Immobilization Technique (PIT) Maneuver, the vehicle push (as in through a blockade), dirt-to pavement transitions, and more.

After all, sometimes defensive driving is rather more offensive.

Here’s some of what Marshall had to say about the PIT Maneuver.

There are several very serious considerations when entertaining the idea of attempting to PIT out another vehicle. The first is legality. If you try this move on your nearest interstate, it’ll likely be considered vehicular assault. Furthermore, if the car you PIT spins into another vehicle or off the road and anybody gets injured — or worse — you’ll likely have to answer for that if and when you do make it out of the immediate crisis. Also, there’s a reason they call this a precision technique. 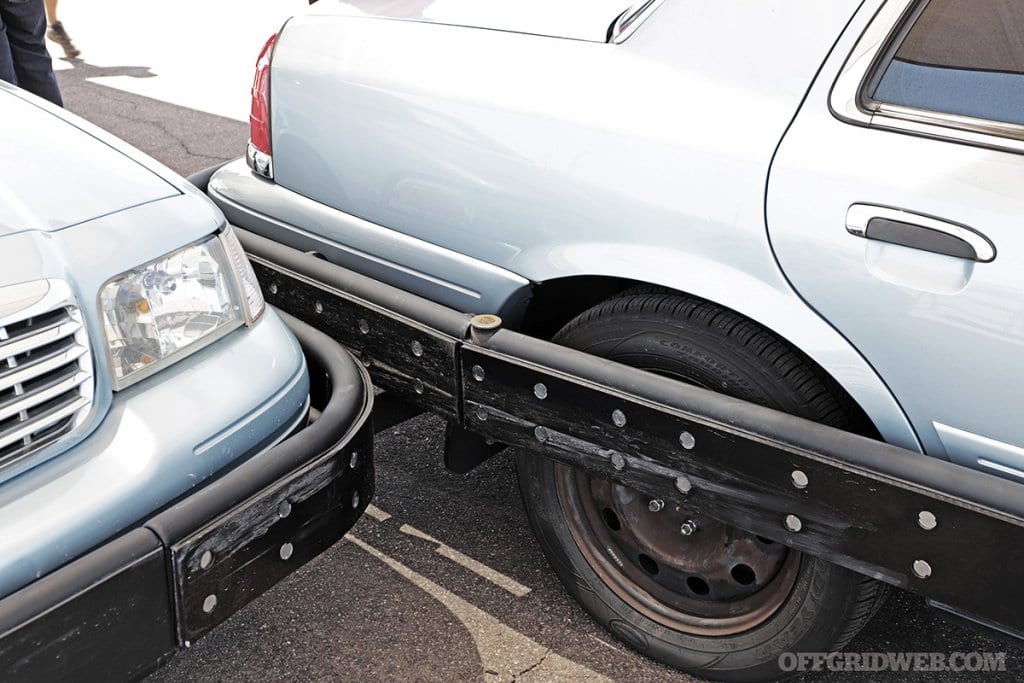 You must be able to match the other vehicle’s speed exactly — and while in the perfect position. Too far back and you cause them to fishtail slightly, but not spin. Too far forward and you will just dent the door.

Also, this isn’t a hard slam into the broad side of your target vehicles, like in Hollywood car chases. This is a gentle nudge — a gradual pressure applied from your car to theirs, perpendicular to the direction of travel. Don’t forget to accelerate as you begin turning into their car until they begin spinning out. If they turn, change lanes, brake, or accelerate, you will have to mirror all of those changes while holding that rear quarter-panel position. Even in our practice sessions at Bondurant alongside a relatively cooperative “suspect” vehicle, this technique was tricky to pull off.

Steering, braking, acceleration, informed decision making…these are all part of effective tactical driving. And it takes training. To wit:

“While our descriptions of countermeasures are meant to help you understand possible solutions, nothing can truly take the place of empirical knowledge. Like any other aspect of preparation, reading about it and practicing it alongside trained instructors are two different things. A vehicle is an extension of yourself, and like a firearm or knife, it’s only as effective as the person wielding it. You won’t get this kind of training with DMV instructors.”

Read the rest in The Will to Drive on OFFGRIDweb.com. You can learn more about the Bondurant Racing School on TopSpeed.com. And take a look at more Sunday Drive articles.

There ya go. Now you can hit the open road in complete confidence!

Team Rubicon Greyshirts: “Strike Teams” Are Busier Than Ever