I’m not much into stealth games, I mean, besides Syphon Filter. So I’ve not played the first four entries into the Sniper Elite series. After watching a friend play Sniper Elite 5, I gave it a chance. Plus, it’s free on Xbox Game Pass, so it’s not like I was out any cash to give it a try. I’m glad I did because I had an absolute blast playing the game.

Sniper Elite 5 has you playing as uber commando and sniper Karl Fairburne. (Possibly named in reference to W.E. Fairbairn?) The setting is France, 1944, and you’ve been dropped to help the resistance stop something called Operation Kraken. To be honest with you, the story isn’t a big deal here. I couldn’t remember much of it if my life depended on it.

You’re an allied sniper, and your goal is to kill Nazis, so the story is just an excuse to drop you into different environments to do just that. 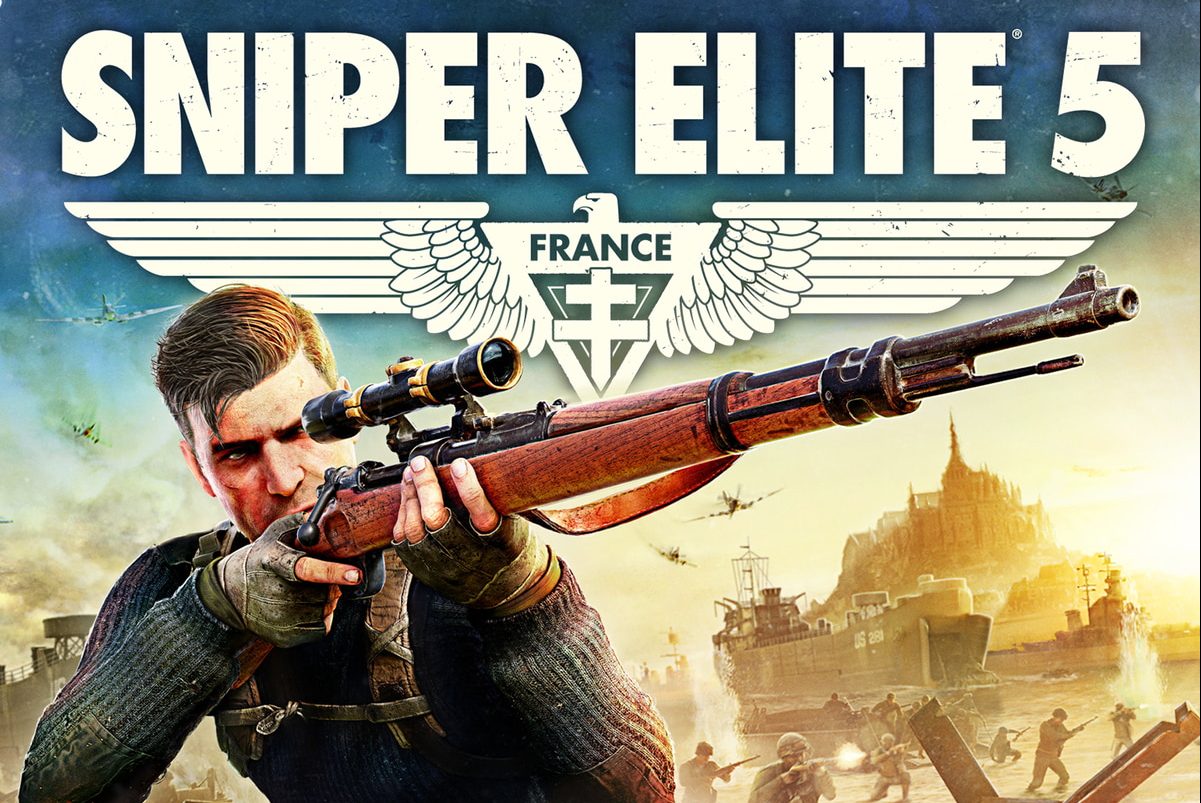 Sniper Elite 5 isn’t a free-roaming game in the same vein as Grand Theft Auto or Far Cry. Each level is self-contained but a sandbox unto itself. Players get dropped into a map and can approach the objectives and mission any way they want. Every objective seemingly has multiple angles of approach and various solutions.

Inside the levels, you’ll have main objectives that have to be completed for exfil purposes. Then you’ll have optional objectives gathered from found intel, as well as a high-ranking Nazi that needs killing. Doing these bonus kills and objectives unlock new weapons and experience for your character.

Every rank gained delivers a skill point that allows you to choose different perks in three other ‘skill trees.’ These are combat, equipment, and body. Upgrading the different trees allow for different skills and abilities, but it’s super shallow and fairly simple.

One thing that stands out to me in Sniper Elite 5 is the level design. It’s fantastic. These massive levels are well designed and allow for multiple, unique approaches to an objective. Maybe as you circle right, you see a machine nest, backed by a fireteam of Nazis. If you’re going stealthily, then this might not be the correct route for you. So, backtrack and approach the area in a different way.

The levels are open and allow for a lot of freedom of movement. As you navigate the levels, you can climb vines and ladders, vault over walls or through windows, climb under fences, and take zip lines when necessary. This freedom of movement allows for easy navigation and grants you the ability to get out of rough situations reasonably quickly.

Obstacles all have different solutions. For example, let’s say you have a locked door. You can blow it to pieces with a satchel charge, or you can slowly and stealthy pick the lock, or maybe you hunt down and kill who has the key, which is both silent and quick.

Most of your killing will be made with your guns in Sniper Elite 5, but there are some creative ways to dispatch enemies. Exploding red boxes, barrels, and more show up, making it easy to take three Nazis working on a tractor out. You can lay down booby traps and mines and even plant grenades under dead nazis for other Nazis to find.

Maybe you drop a chandelier on a Nazi. Or, you plant a mine at the end of a bowling alley and take out a high-ranking Nazi who thinks he’s Randy Quaid from Kingpin.

Unsurprisingly Sniper Elite 5 puts a big emphasis on stealth gameplay. Lots of crawling through high grass and sniping from long distances. Throughout the game, elements allow you to conceal yourself and your shots. Planes flying overhead are loud enough to help silence your shots, and generators can be rigged to make noise for the same reason.

You enter a mission with three guns, a sniper rifle, a submachine gun, and a handgun. You start with two options in each category and can pick and choose between British and American firearms.

All the different guns have different audible distances measured in meters. The louder the weapon, the more likely someone is to hear it. The use of suppressors and even subsonic ammo can reduce this noise. Additionally, a 9mm SMG isn’t as loud as a .30-06, which makes sense.

Also, if you find yourself outnumbered, I’d advise running. You won’t last long against a fire team of Nazis. That’s not how the game is played. Stealth matters a lot in this game.

The Guns and Ammo

Sniper Elite 5 is packed full of guns, both the guns you expect and guns you don’t. Sure, we have the M1911, the Thomspon, and even a scoped M1903, the usual suspects. However, we also see some experimental weapons like the Welgun, the SREM-1 pump-action, bullpup sniper rifle, and Welrod Mark 1.

The game allows you to pick one from each category before each mission, and you’ll unlock more firearms in the armory as you get bonus Nazi kills. Oh, also, there are some period-correct but oddly placed guns. For example, the Nambu Type 14 and Type 100 are both Japanese weapons that found themselves in France somehow.

The damage guns do all over the place is typical for video games. Also, a .32 ACP gun, called the MAB Model D, randomly pierces armor with standard rounds. To be fair, an urban legend states that the .32 ACP pierced Nazi helmets more consistently than other pistol rounds. The Webley Mk VI is stupidly powerful, like a magnum-powered revolver.

The game does give a variety of weapons to the player. As you play the levels, you can pick up Nazi weapons to use temporarily. When out of ammo, or when you swap to an equipped weapon, you’ll ditch your battlefield pickup. This allows you to make on-the-fly changes to your equipment because sometimes you need an MG42.

Sniper Elite 5 features a deep and rich customization system. You can make some real Frankenguns through this system. Sure, you can attach suppressors to your guns, a Cutts compensator to your Thompson, and extended magazines.

You can also get a little weird with it. Let’s attach a stock and three power scope to a 1911, cause why not? Let’s make it full auto, and get crazy with it. You can do that with most of the guns and make something that would make John Browning frown.

Players can grab different ammo types as well. You can swap between standard rounds to armor-piercing loads or subsonic. Each has its own strengths and weaknesses. Heck, there are even nonlethal loads, but don’t ask me why. These are the Nazis we are talking about. They only get the lethal lead.

Sniper Elite 5 is a very fun game. The only downside is that the objectives are rarely much different and tend to repeat themselves. However, the level design, enemy A.I., and multitude of solutions make the game a ton of fun and grant you some real replayability.