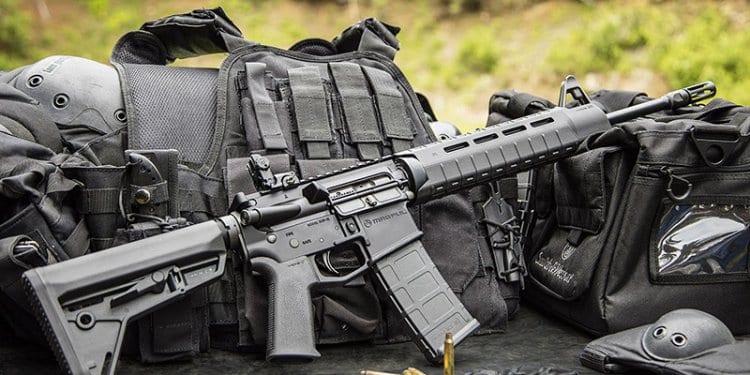 Smith & Wesson is a major player in the AR-15 market – no small feat for a company that is most often known for making handguns. Several years ago, when the company first announced that it would be selling AR style rifles, there were many skeptical shooters. How would a company so well known for revolvers jump into the thoroughly modern semi-automatic rifle market?

Fast forward a few years from that time and we can now see Smith & Wesson was quite right to get into the modern sporting rifle (MSR) market. Not only has the company been profitable with the line, its guns have offered strong competition to other brands. This has two effects for consumers: lower prices and improved quality.

Even though the current AR market is a bit soft, Smith & Wesson continues to invest in it. This year, Smith & Wesson expanded its AR-15 line with multiple new introductions. Just a few weeks back, the company announced updated M&P15T and M&P15X rifles that used M-LOK handguards.

Smith & Wesson’s latest rifle introduction suggests an even closer relationship between it and Magpul: the M&P15 MOE SL. Anyone familiar with the Magpul catalog might correctly guess that this new rifle will use furniture from the MOE SL line. SL stands for Slim Line which is exactly what these parts are. I’ve used a lot of Magpul parts in the past, and I am a big fan of the SL accessories. For me, they are a better fit – especially the pistol grip – than the traditional parts.

The M&P15 MOE SL rifles will use MOE SL pistol grips, buttstocks and handguards. As I mentioned, I really like the MOE SL pistol grip. It has a more vertical angle to it than the original MOE grip and slightly thinner (about 0.1” thinner.) While the angle is a bit more polarizing, I’ve found that most people have very positive things to say about the grip size.

The buttstock is an adjustable length stock that gives you 3.3” of adjustment. It has more of a minimalist aesthetic than other stocks like the CTR. The MOE SL carbine stock has a QD socket on both sides for the easy addition of a sling. Also, there is a more traditional sling attachment slot on the bottom of the stock.

Smith & Wesson opted for a mid-length gas system for this gun. Consequently, the Magpul MOE SL mid-length handguard was paired with the rifle. This handguard is made of polymer and is pretty lightweight. Magpul designed it to be a direct replacement for the military style two-piece plastic handguards that are on many rifles. So, it uses a standard delta ring in back and fits perfectly around the front sight tower used on this rifle.

Of course, handguards have become attachment points for accessories as much as a way to protect the hand from a hot barrel. This handguard is no different. Since it is from Magpul, it uses M-LOK attachment points.

M-LOK is a system of attaching accessories to a rifle through a proprietary design developed by Magpul. The M-LOK standard in not open, but is freely licensed by Magpul. By keeping the standard proprietary and licensing it for free, Magpul can ensure that anyone using the M-LOK name is producing quality, in-spec products.

While the MOE SL furniture gets top billing, the Magpul MBUS rear sight is also used on this rifle. With the front sight tower, this provides a good, out-of-the-box sighting option. The upper receiver has a Picatinny rail for the easy addition of a 1-4x scope or red dot for your shooting needs.

Three variants of this gun are available, each having its own color scheme. The first is all black, the second uses furniture with a flat dark earth color and the last version uses stealth gray furniture. Oddly, the 30-round PMAG magazine is only available in black regardless of the color selected. While a single magazine will get you going, I strongly suggest buying a bunch of extra PMAGs so you never are out of commission due to a busted mag. 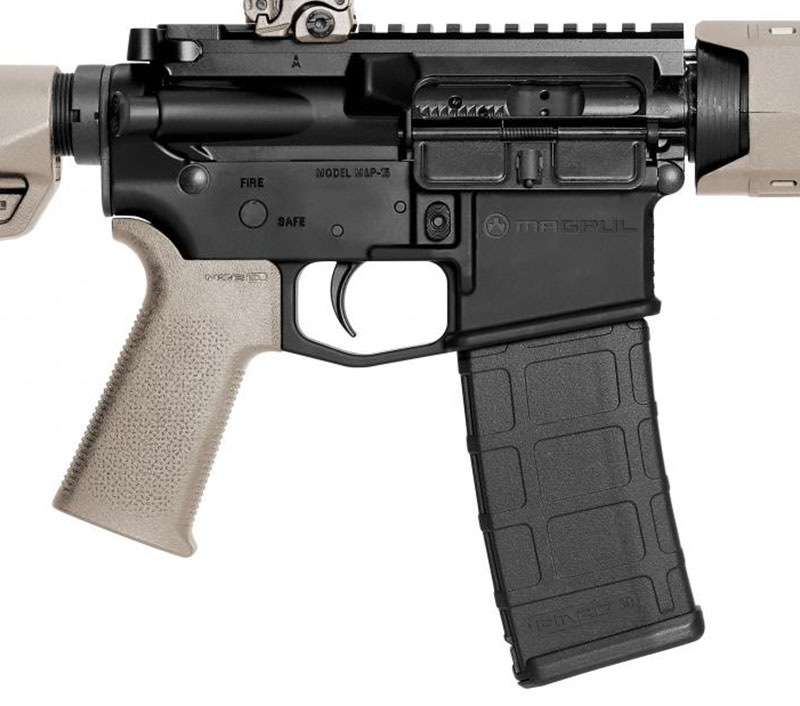 One of the interesting things to me about these new guns is the co-branding. Smith & Wesson engraves the Magpul logo on the right side of the receiver. This kind of branding is rarely done, and there are few Magpul logoed guns on the market. While I won’t engage in idle speculation about what this might mean for future collaborations, it does suggest a closer relationship between the two companies than I would have suspected.

Of course, the heart of a gun is a little deeper than the furniture bolted to it. For the M&P15 MOE SL, Smith & Wesson opted for a 16” barrel with a 1:8” twist. The barrel is made of 4140 steel with 5R rifling and Armornite finishing on the inside and outside for corrosion resistance. The barrel is threaded. As it ships, Smith & Wesson includes its own unique flash suppressor. As with most AR rifles, this gun is chambered for the 5.56 NATO and will also shoot .223 Remington without any problems.

Unloaded, the gun weighs 6.7 pounds. I like to keep my AR rifles under 7 pounds, so this gun is appealing to me. Overall, it is 37” long.

As I mentioned, the AR market is a bit soft right now. I’ve seen name brand AR rifles going for as cheap as $399. Granted, those are few and far between, but the fact that I can find them that cheap speaks to how far the market has fallen. However, I expect prices to bounce back in the coming months as excess inventory is liquidated and demand closes the gap with supply.

The suggested retail price on this gun is $1,239 in any of the three color variants. That might sound a bit high, but I don’t think it is. First off, this appears to be a quality gun with many of the accessories that a lot of shooters would want to upgrade to anyway. Secondly, as the market returns to normal conditions, AR prices will increase and this gun will be more closely priced for that market. Smith & Wesson is playing the long game, and I think the pricing is based on what happens tomorrow not today. Lastly, that’s just a suggested price. Depending on what a dealer pays, it could be cheaper by $100 or more.

I look forward to watching Smith & Wesson continue to develop its rifle line. It will be interesting to see if there are additional collaborations like this in the future between the two companies.