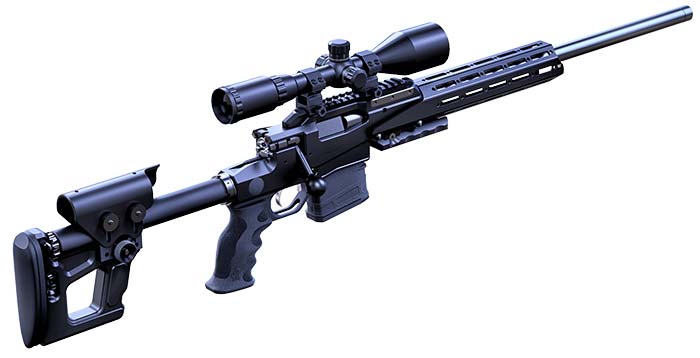 Ritter & Stark, an Austrian firearms manufacturer, announced the introduction of a new line of short-action rifles. The new SLX line will be a series of bolt action rifles designed for precision shooting. The guns are based on the proven SX-1 Modular Tactical Rifle (MTR), but with a shorter overall length and lighter weight.
The first gun in the new series is the SLX-308 that will be chambered for the .308 Win cartridge. This gun will be officially introduced at the IWA Outdoor Classics show that starts on March 3.
Additional calibers will be rolled out this year. The company has publicly committed to rifles in .260 Remington and 6.5 Creedmoor.
Like the SX-1 MTR, the SLX-308 has a high-end barrel that the company backs with a 0.5 MOA guarantee for 5,000 rounds. Actually, the company states the accuracy as “at least” 0.5 MOA, suggesting that they see even better accuracy in at least some of its guns. The guarantee is with “factory grade ammunition.”
The SLX rifles are billed as “multi-caliber.” I take this to mean that you can swap cartridges in the same rifle. Supporting that idea is the fact that the barrels can be swapped in and out. To avoid problems with re-zeroing a scope, the company attaches a Picatinny style rail directly to the barrel. This allows you to mount a scope to the barrel, not the receiver.
Ritter & Stark uses a two-stage Remington 700 compatible trigger in the gun. The trigger is user-adjustable. By using an existing trigger pattern, the company makes it relatively easy for a shooter to update the trigger.
On the hind end, Ritter & Stark uses an adjustable buttstock. The stock includes a Picatinny rail for the addition of a monopod.
If you are headed to Nuremberg for the IWA Outdoor Classics, you can see this gun in Hall 9 at booth 9-144. Feel free to share any photos you take of the gun and tell us what you thought of it in the comments section below.