We’ve talked about boom sticks and room brooms in the cinema, but what about the long bois? By long bois I mean rifles. How many times has a rifle been featured in a movie that created a significant advantage for the hero or heroes? That’s what I set out to discover. I suffered through action movie after action movie to bring you the best long bois in action.

The rules were simple. I had to find movies with scenes where using a rifle made a significant difference in the action scene. It had to provide the hero a true advantage over their adversary. With that in mind, I found 5 awesome action flicks where rifles make all the difference.

It is a right of passage for a gun writer to write something about movies, and inevitably, they mention “Heat.” Gun dudes love “Heat”, and to be fair, we love most of Michael Mann’s catalog. It’s a good film backed by realistic action and believable gunplay. In the film, the team of professional thieves is often armed in a way to provide themselves with a significant advantage over their adversaries. This typically means rifles, and they carry everything from AKs to FALs.

Near the end of the film, the crew finds themselves surrounded by cops in a prolonged shootout with the LAPD. They should be turned into Swiss cheese since the odds are 10 to 1. Yet, they persist and hold out, fighting their way to escape. Along the way, they lose some compatriots, but two of the robbers make it home free.

How? Well, they outshoot the LAPD with Colt Model 733 rifles. These rifles give them a serious advantage when facing the cops, who are primarily armed with handguns and shotguns. The rifles allow them to have more effective fire and to punch through cars and soft armor. Some of the detectives have rifles, and they are the only ones to effectively engage the bank robbers.

“The Dark Valley” isn’t a reference to your mom but an Austrian-German film with a western edge. This movie came out in 2014, and it’s a film that many missed. It’s a dark, humorless tale of revenge. A man arrives in an Austrian village in the late 19th century. A family rules the town with a near-iron fist.

The man comes from America and claims to be a photographer, but we soon find that he intends to take some shots, but not with a camera. He quickly encounters the family and kills 2 of the 6 brothers, not with firearms, but with his wits. The last 4 get the gun.

I watched a lot of Westerns as a kid, and one I always remembered was “Quigley Down Under.” An American Western set in Australia? It was different. It was humorous and featured a charming protagonist. Also, we can’t forget to mention Alan Rickman as the bad guy. He’s easily one of my favorite bad guys in film.

Quigley is a marksman. He applies for a job calling for an experienced shot in Australia by sending the ad with a tight group of shots fired from 900 yards. He shows off his skills and his rifle upon his arrival. His rifle is a Shiloh Sharps 1874 Long Range Rifle. It features a 34-inch barrel, fires a .50-100 cartridge, uses dual triggers, and a Vernier sight.

When he learns the job will be murdering the indigenous Aboriginals, he turns them down in a rather creative way. He makes an instant enemy, and the film’s conflict begins. Quigley often turns to his rifle to settle the score. He is extremely accurate, killing bad guys at hundreds of yards, often while they are on horseback. He’s unbeatable with his rifle, and the film lovingly showcases its double triggers and sights.

He’s a rifleman, and you shouldn’t mess with a rifleman. 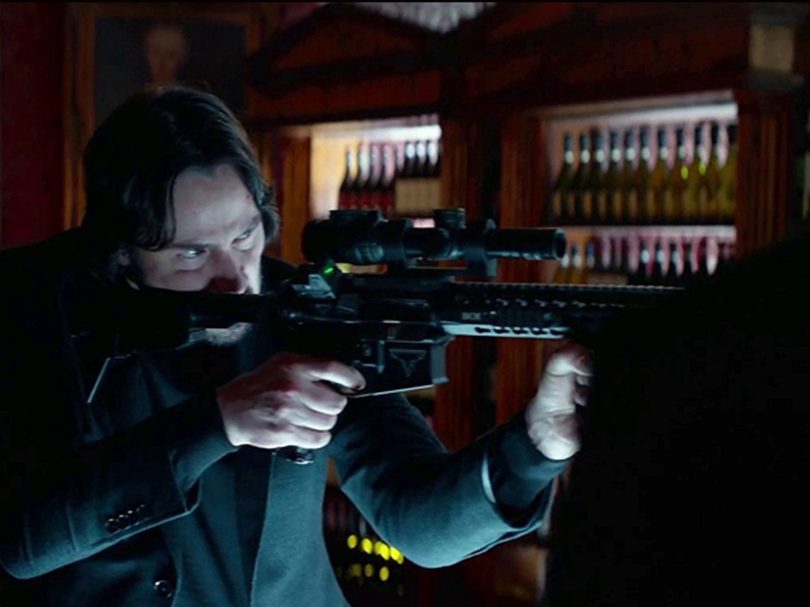 There is a good argument that John Wick would be well-armed and capable with any firearm. He often makes use of shotguns, handguns, and submachine guns. In the second film, he’s tasked with a seemingly impossible mission, but he completes it in John Wick fashion.

As he makes his escape, he is double-crossed by his employer. He’s outnumbered and armed only with a handgun. He retreats under fire and takes strategic shots to slow his pursuers. Things change when he gets to a rifle he had secreted away. Once armed with a rifle, he begins taking the fight to his pursuers who are seemingly armed with SMGs and handguns.

John’s superior weapon and fighting skills make short work of them. It is a custom Taran Tactical TR-1 Ultralight equipped with an LPVO and offset red dot. He’s armed with PMAGs and a coupler for quick reloads, which he often needs as he takes down dozens of thugs.

Wind River isn’t a fun action film. It’s a Neo-Western set on an Indian Reservation. A Fish and Wildlife Agent teams up with an FBI agent to help solve the murder of a young native girl. Along the way, they seek out her boyfriend, a security contractor with a private military company (PMC) at a local drilling camp.

The FBI Agent and local police make their way to the drilling camp where a tense scene unfolds that leads to a shootout. The bad guys outnumber and outgun the good guys and quickly kill the police, leaving the FBI Agent left. When things seem grim, we see the chest of the bad guy explode.

The Fish and Wildlife agent Lambert is hidden in the snow with his Marlin 1895SBL in .45-70. The bad guys have mostly handguns, with a single shotgun and one rifle, but it doesn’t matter. He has a better, camouflaged position and the skill to go from bad guy to bad guy, killing them without hesitation. The rifle rules, and so does fieldcraft.

A good rifle can go a long way. I mean that, literally. Very few films ever pick up on the strengths of the rifle, and when they do, it’s something special. Hollywood often sucks in their portrayal of firearms, but hopefully, I’ve given you a few flicks you can enjoy where the rifle gets its day to shine.