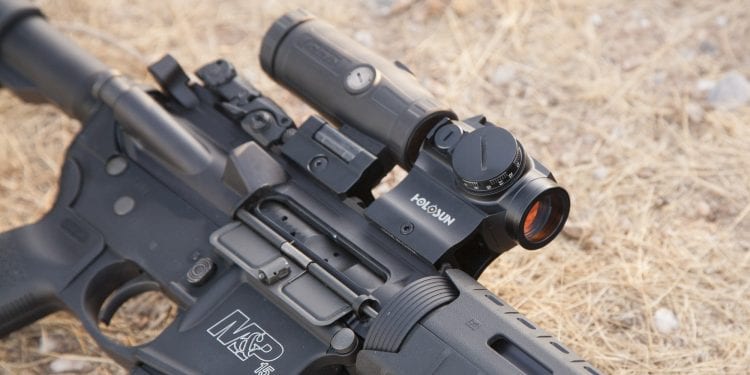 We already know that red dots by themselves are awesome. Sure, like every secondary aiming device, they have their drawbacks – batteries can run dry, dot projectors could get blocked, the zero might get out of whack if dropped too hard – but generally speaking, red dots make shooting faster and more accurately a whole lot easier. But what if you could shoot that accurately from a greater distance with a red dot magnifier?

Red dots by themselves are only accurate out to about 100 yards. Likely this is fine if your red dot is mounted on a handgun because chances are you’re not shooting anything that far with a non-rifle. But plenty of folks put red dots on rifles, which, like the red dots themselves, is also awesome.

If you’re shooting long distances, you need an optic that lets you see that far. So, you have a choice. You could get a self-contained magnified optic that works great for long-range but not so great for shorter distances. Or, you could keep your existing red dot for shorter distances and throw on a magnifier for those times when you need the projectile to reach out and touch something way over there, out of the red dot’s stand-alone effective range.

Now, before I go on, let me address the folks who read the last paragraph and snarked, “But a red dot magnifier won’t work out to a thousand yards.” Yep, you’re right, no question about it.

One of the beauties of a red dot magnifier is it can be moved out of the way when not in use yet easily flips into place when you need it.

If you find yourself struggling to see that semi-long-range target with just the red dot, simply flip the magnifier into place behind your red dot and you’re in business. When you’re done and need to find a closer-range target, quickly flip it to the side and let it hang from the mount, out of the way of your red dot.

It’s almost like having an extra sight handy at a moment’s notice. In fact, that’s kind of exactly what it is. 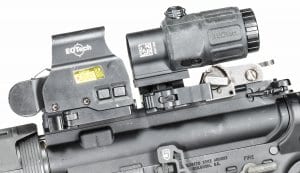 While it’s ideal to pair the same brand of red dot and magnifier, you don’t have to.

If you own a Vortex red dot, for example, and pair it with a Holosun magnifier, it will work fine. The only potential hiccup might be the mounting height, as the optic or magnifier lenses may not match up perfectly if they are different brands. This is easily fixed with many plate and mounting adjustments. There is likely no need to buy a new red dot or magnifier in the same brand if you have a red dot that you already like and a different brand magnifier that you also like. 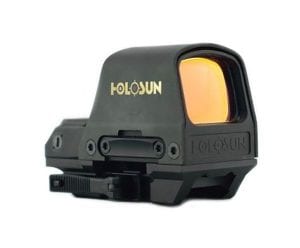 No need to buy another whole sight system if you just add a magnifier.

Most people who purchase a red dot magnifier buy it as an enhancement to a red dot they already own, sometimes bought months or years apart. They aren’t looking to buy the set all at once. And they certainly don’t want to shell out the big bucks for a whole new system.

So instead of forking over $500-$1,000 for a whole new optic setup, they add a magnifier for a few hundred dollars. Problem solved without breaking the bank. 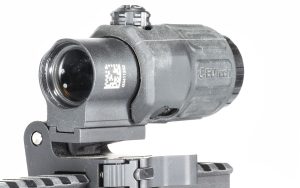 Remember when the ultimate AR-15 setup had to include one of these?

Most of them mount via Picatinny rail, so if you have that wonderful system running down the top of your rifle, you’re in business in a matter of minutes. Good magnifiers go one step further and add a quick release to the mount so you can take the magnifier off and throw it on another gun. 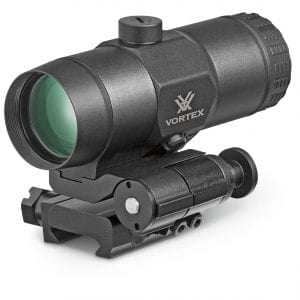 Most mount directly to the Picatinny rail.

Unlike the red dot itself, there are no batteries required for a magnifier because it is just a pair of lenses. So if your red dot is running, your magnifier will be good to go as well. 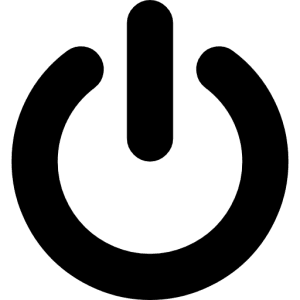 This button doesn’t exist on a magnifier.

Just like a good red dot, a good magnifier requires zeroing. If you ever come across one that claims to not need zeroing, run! We call that a child’s magnifying glass, and it won’t work well on your rifle. There’s a reason it’s only $25.

Good magnifiers must be zeroed to work correctly when the red dot is magnifying.

To zero a magnifier, zero the red dot first and take note of where the dot appears on the optic. Now flip the magnifier in place behind it and see if the dot is in the same or different location on the lens. If it moved, that tells you the magnifier needs zeroing. Take more shots, but only adjust the magnifier, not the red dot. Once both pieces are zeroed, you’ll be placing accurate shots on target in no time. 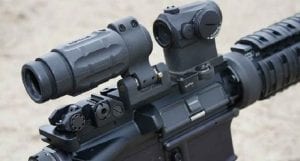 Zero the dot first, then the magnifier.

Red dot magnifiers can be a great optic enhancement for mid-range shots to add clarity downrange. If you need a magnifier or the red dot to go with it, we carry them!

Try one and see what you think, then leave your comments below. Happy Shooting!