I like video games, but I’m not at the stage where I watch E3 presentations on Youtube or live webcasts. However, once a year, I watch the Devolver Digital presentation without fail. They show game footage and announce stuff, but it’s a parody or satire of a presentation, and it often gets insane with Tim and Eric-style comedy. Devolver Digital also makes some unconventional games, and my favorite is My Friend Pedro. 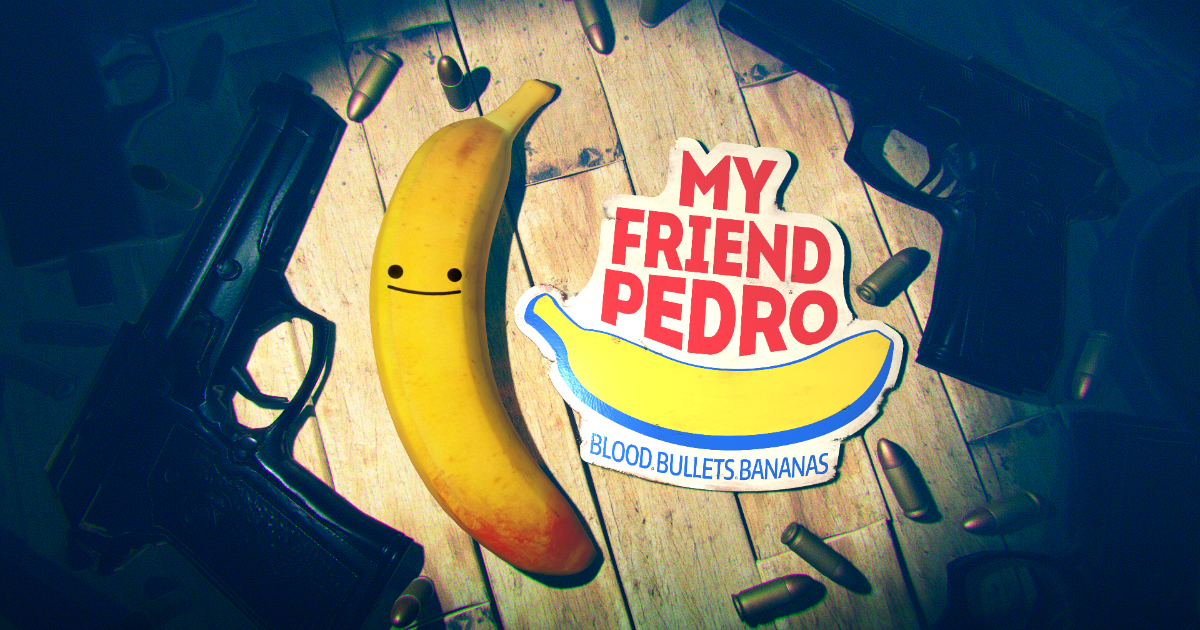 I played a fair bit of Contra and later Metal Slug and have been a fan of 2D shooters since I was a kid. However, I don’t play them that often. When I saw a Devolver Digital presentation where they highlighted the game, I knew I had to have it. You play as a masked, seemingly psychopathic gunman being guided by a floating, talking Banana named Pedro into killing a criminal syndicate.

Boy, oh boy, do you get to do some killing.

The game starts simple enough. You awake with no memory of your past, and a Banana tells you it’s time to start killing. Specifically bad guys and members of a criminal family. He assures you he’s your friend and you can trust him. You’re blessed with a Beretta 92FS with infinite ammo early on, and you get to the killing quickly and then get blessed with a second Beretta.

This is a 2D shooter that is all about movement and murder. You are just jumping up and running back and forth in a 2D world. You’re wall jumping, spinning, ducking, using cover, and rolling through the world. Occasionally you leave the bleak world you’re in to visit Pedro, where you learn new techniques and abilities.

The first thing you learn is a classic shooter mechanic in the form of bullet time. This is called focus and allows you to slow down time and aim with greater precision. Wielding guns akimbo is a big part of the game, and the two guns allow you to aim at two bad guys simultaneously. You can spin in a circle shooting two guns as well, completely obliterating enemies who might be surrounding you.

These different mechanics link together and work to make an incredibly stylish shooter that effortlessly combines gunplay and movement.

Beyond Move and Shoot

My Friend Pedro is incredibly deep for a 2D shooter. You’ll find yourself in situations where you have to solve a puzzle, and that puzzle is how do I kill all these guys while not getting killed myself. The game will put you in seemingly impossible situations that cause you to examine your surroundings and the tools you have to solve the problem.

Other times My Friend Pedro will have you dealing with turrets, avoid lasers and jump from rope to rope, disabling different lethal threats as you descend. Hell, I haven’t even mentioned the ability to ride on skateboards, kick knives into enemies, or kick chunks of bad guys into other bad guys.

The gameplay is deep and intense with a constantly changing environment. The graphics and environments are a bit plain and don’t change much. The soundtrack is fairly generic, but the sound effects and gunfire are punchy and fun. It is an indie game with an indie game budget, so that should be noted.

For an indie, it’s not bad, but not super impressive. Our story isn’t much of one, and the game doesn’t try to be too deep with it. Pedro’s advice and commentary are often chuckle-worthy, but you largely don’t know why or care about the numerous bad guys getting their just deserts. Those desserts are banana splits.

The game’s first half or even two-thirds is a lot stronger than the last portion. It’s a fair bit more fun and imaginative in terms of levels and bad guys. Unfortunately, the game’s main way to increase the difficulty as you progress is to make the bad guys take more rounds. I’d have preferred more bad guys than bullet sponges.

Also, some of the imagination and variance leave the levels a bit. Even with those complaints, I had a great time with My Friend Pedro. It’s violent and not for kids, but it’s perfect for passing the controller back and forth when you die or beat a level. The game is also all about high scores and level tiers, so it gets addictive to get the magnifier as high as possible.

The Guns of My Friend Pedro

The game isn’t exactly realistic—the talking banana might give that away. But the guns are relatively real. There aren’t any fictional BFGs to dominate, and the selection is fairly standard. You start with your pistol which becomes pistols, and these are your infinite ammo weapons. These are clearly Beretta 92 series guns.

As the game progresses, you get hands-on with a pair of Micro Uzis that are a blast and a sure way to chew through ammo. A shotgun turns bad guys into a gooey mess, and your sniper rifle hits hard and shoots far. It’s a good mix of guns with solid balance. Even when you are low on ammo in everything, your pistols are still a valid option. Later on, an M4 with a grenade launcher becomes available as well.

The gunplay isn’t exactly realistic, but you can’t be stupid. You’ll waste ammo quickly and die even quicker if you don’t play smart. Cover is important, and using the guns to their strengths will help you dominate the game and succeed.

My Friend Pedro might not be a big expensive A-list game, but it’s a total blast. It’s action-packed, not full of microtransactions, and cheap. I grabbed it on Xbox Game Pass, but it seems to be available for most systems. There is an iOS and Android game as well, but it’s a separate game I haven’t dived into just yet.

Do we have any Devolver Digital fans in the audience? Any My Friend Pedro players? Let us know below.