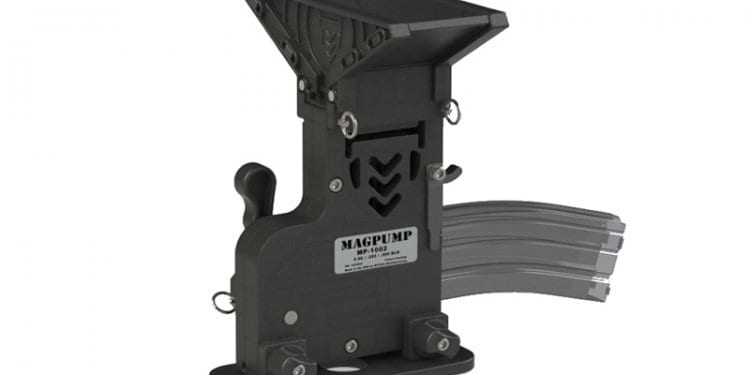 At Shot Show 2017, Mitusa Manufacturing showed off the Mag-Pump AR 15 Mag Loader. It is a hopper-fed magazine loader for AR 15 style magazines. While there are plenty of magazine loaders on the market, the Mag Pump is unique in that it does not matter which direction the bullet is oriented.

Mitusa advertises that this is the only magazine loader that does not require the user to handle each round. In the case of bench-loaders, you typically have to handle each round one at a time to load them correctly into the bench loader. Same with the Maglula AR loaders. Each round is manually inserted. There are some loaders that you dump a box of ammo into it but the bullets must be oriented properly.

The Mag Pump AR 15 Mag Loader doesn’t care which direction the bullets are loaded and it works with .223, 5.56 and .300 Blk ammunition. It is designed to work with mil-spec magazines.

The Mag Pump can be quickly disassembled and fits into a .50 cal ammo can for storage. It retails for $389 if you want the billet aluminum version. It weighs 3.75 lbs. Mitusa also makes an Ultralight version that weighs 2 lbs and is made of polymer.

Go to Mag-Pump.com for more info.

Now that you’ve got your mags loaded, don’t forget your eyes and ears. Speaking of ears, if you have a
sec check out this TCI DEHP review by Fifty Shades of FDE.

Read more of Nicholas Chen’s articles on The Mag Life.

You got your mags loaded, don’t forget your eyes and ears…and speaking of ears, if you have a
sec check out this TCI DEHP review by Fifty Shades of FDE.