After several years of waiting, the newly manufactured shotguns from Kalashnikov USA are finally here. These will likely generate a lot of interest in the shooting community.

Who Is Kalashnikov USA?

Some of you might be asking who is Kalashnikov USA. That’s a fair question.

After Russia invaded the Ukraine in 2014, the United States government imposed a variety of sanctions on Russia. One of those sanctions prevented the additional importation of firearms from Russia. Because of this, new products from Concern Kalashnikov could no longer be obtained in the US market. This ban included the popular Saiga 12 shotgun. 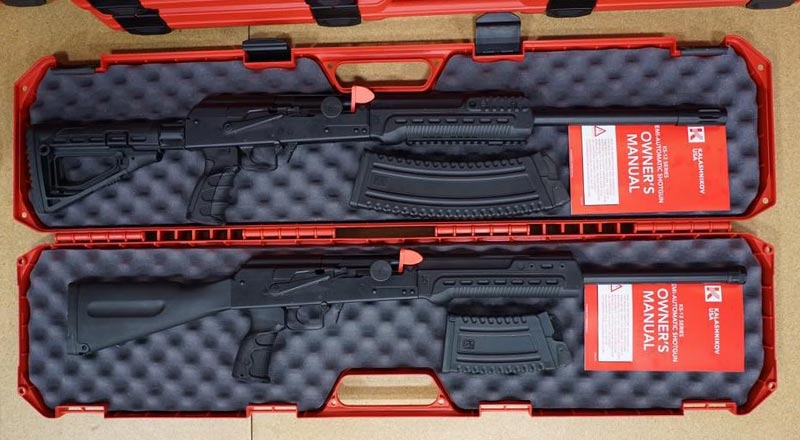 At the time, the sanctions went into effect, Kalashnikov USA, or K-USA, was an importer who ensured 922(r) compliance of the guns. As the Concern Kalashnikov guns would no longer be available for importation, K-USA pivoted and restructured itself to be a manufacturer. The company moved to Florida and got to work designing new firearms for the American shooting market.

K-USA does not have any ties to the Russian company Concern Kalashnikov.

The first of the K-USA guns is the semi-automatic shotgun called the KS-12. This gun is a 12 gauge shotgun that feeds from detachable magazines. A 5-round magazine comes with the gun, though other capacities will also be offered. According to the company, the KS-12 does accept Saiga 12 compatible magazines.

As you might expect from the gun’s appearance, it has some commonality with the typical AK-based rifle. For example, a large safety switch is on the right side of the receiver and the gun uses a gas piston system.

The 18.25” barrel is threaded and comes with a thread protecting cap. This gun isn’t a featherweight at 8.5 pounds. That’s very similar to the Saiga 12 shotguns made by the Russian company.

If you like the KS-12 but would like a few more features, take a look at the KS-12T. Called the “autoloading tactical shotgun” by K-USA, this scattergun uses an skeletonized buttstock, adds a flash suppressor and provides a handguard with lengths of Picatinny rail. The shotgun also comes with a 10-round magazine.

Not only are the guns in production, but they are shipping as well. After such a long delay after they were announced, I was beginning to suspect that the guns would never ship. I am glad to see I was wrong.

The next thing I hope the company is able to produce is the AK Alpha rifle it announced in 2016. A blend of an AK heritage with modern updates such as an adjustable stock and ambidextrous charging handle. Also, the safety switch is replaced with something that looks more like the AR’s selector.