Hints of the Future: The TAVOR 7

One of the most popular pastimes for shooters seems to be arguing about cartridge selection. I imagine if you travelled back through time to around 1900, the 6mm Lee Navy vs. .30-40 Krag argument wouldn’t sound all that different from today’s 5.56 vs. 7.62 debate.

Without a doubt, the 5.56 NATO has proved to be an effective fighting cartridge around the world. Nevertheless, it is not perfect and some people prefer to use a larger caliber round for combat purposes.

The 7.62 NATO (aka .308 Win or 7.62×51) is frequently cited by some as being an overall better combat cartridge. It is around this cartridge that IWI US announced it was building a new rifle called the TAVOR 7.

Looking at the company’s pre-production photos, it is clear the new rifle will bear a strong resemblance to the original TAVOR rifle. Likewise, it appears that the controls are very similar to the current production rifle.

This rifle will use a short stroke gas piston system. This is a departure from the company’s use of the long stroke system in its other rifles like the X95 and SAR. IWI will use a four position gas regulation system to allow you to match the gun to the ammo. One position is “off” to allow for only the manual cycling of the bolt. The guns will feed from SR25 pattern magazines and will ship with a single 20-round Magpul PMAG.

IWI designed the TAVOR 7 to be ambidextrous. The safety selector has a 45? throw, that should make its use slightly quicker and easier than on some of the company’s other models. 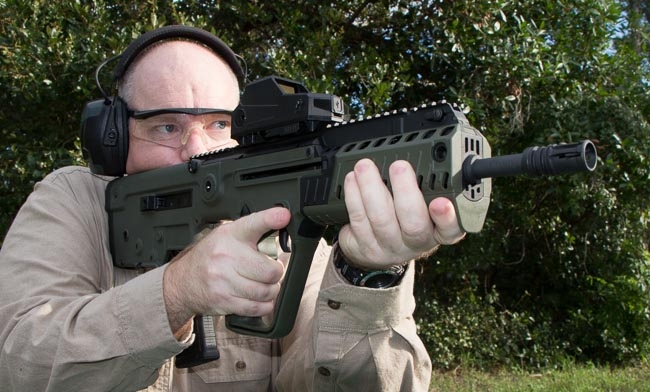 I’ve had a chance to spend time with the TAVOR X95 rifle in 5.56 NATO (photo above.) While I recognize that the TAVOR 7 will be a different design, I can say that the rifle I shot was very well built, accurate and reliable. Though my experience with the bullpup platform is limited, I would gladly consider the new gun if I needed a compact, .30 caliber weapon.

The new TAVOR 7 is projected to ship in January of 2018. So, we should see these at the SHOT Show next year. As of now, the company has not set a suggested retail price for the gun.