HK announces return of the MP5 at NRAAM 2016 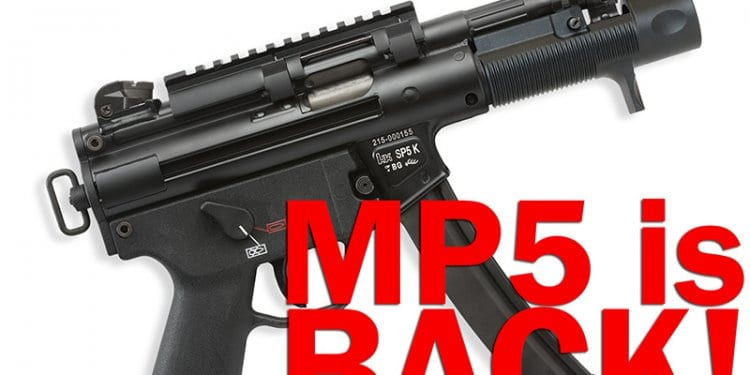 After more than two decades of absence from the civilian market, Heckler and Koch today announced the return of a semi-automatic only version of their ubiquitous MP5 to the American market. The roller-delayed handgun has proven increasingly popular in recent years, with many overseas manufacturers introducing their own variants.

“Designed and manufactured as a civilian pistol, the SP5K marks the return of the roller delayed blowback operating system to an HK commercial product. This system is well-known for its accuracy and reliability. Originally developed on the G3 rifle, it has been used on many of Heckler & Koch’s most memorable firearms of the last 60 years.

“The SP5K is a unique and historic HK pistol that captures the essence of the legendary MP5K but as a semi-auto handgun,”said Michael Holley, HK-USA Vice President for Commercial Sales and Marketing. “It’s equipped with a special ergonomic handguard that protects the shooter’s supporting hand and enables a stable and comfortable grip. A bungee cord sling is also included and makes shooting an SP5K easy. It’s a fun gun to shoot and goes a long way in recreating the experience of handling and firing a real MP5 subgun.”

“The SP5K duplicates the quality and fine details of the MP5, including its precision machined components. The same cold-hammer forged barrel used on the MP5K is found on the SP5K, ensuring a service life of tens of thousands of rounds. The SP5K is manufactured completely in Heckler & Koch’s Oberndorf factory in southwest Germany.

“As a large size handgun that uses the proven roller delayed blowback system, the SP5K’s inherent accuracy makes it an excellent choice for target shooting and an ideal household security arm.

“A wide variety of accessories can be added to increase its functionality. A Picatinny rail scope mount is attached to the upper receiver and allows optional sights to be easily mounted. The SP5K also comes “ready-for-action” in a custom-fitted, lockable, high-quality carrying case.

“Covered by Heckler & Koch’s limited lifetime warranty, the HK SP5K is a faithful rendering of the iconic MP5K as a semi-automatic pistol. Projected availability is July 2016 with a MSRP of $2699.”

With more affordable options already flooding in, it remains to be seen if Heckler and Koch can recapture the roller-delayed market. One thing is for sure, rumors of the roller-delayed system’s death have been grossly exaggerated.