DDI Is Bringing A QBZ Style Bullpup Shotgun To The US 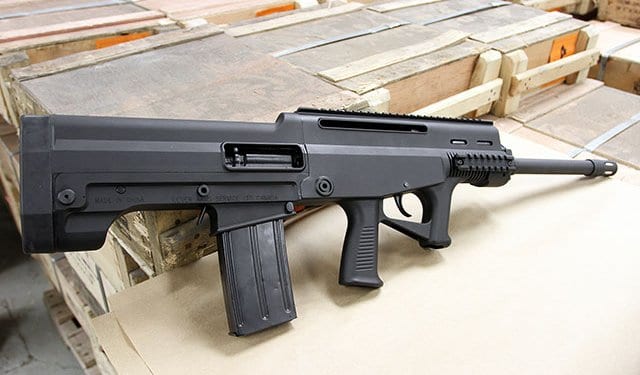 DDI has made themselves known for making some great American made AKs and even though their DDI12 shotgun has gotten off to a rocky start, they have addressed the issues and are coming back stronger.  At Big 3 East last October, Dave gave me a sneak peak into his top secret tennis racquet bag. Inside it was a QBZ style bullpup shotgun.

For those of you not familiar with the QBZ series of rifles, they are the main issued rifle for the Chinese Miltary. Here is a photo of the QBZ-95 bullpup rifle.

The QBZ-95 and any other military arms are banned from importation into the US. However, the bullpup shotgun we’re talking about does not fall into this category.

This semi-automatic shotgun has already been imported into Canada for about a year. But it has not been seen stateside until now. The shotgun does not have a name just yet. In Canada, it is imported by Lever Arms and they call it the LA-K12 Puma. Perhaps it might be called DDI Puma? I would rather it be named DDI QBZ-12.

According to Dave Fillers, you can expect this shotgun to be just under $1000.

As you can see in the video, the DDI bullpup shotgun uses 5 round metal magazines but it seems rather picky about the size of the shell. Certain loads, like some buckshot, are a little too long to fit into the magazine. I hope someone makes 10 round mags for this shotgun. It looks like it could be a lot of fun.