The 2014 movie “John Wick” was a revelation for most of us in the firearms community. Keanu Reeves’s titular hitman moved like he knew what he was doing, handled firearms like a real shooter, and even reloaded his guns correctly! With the fourth one coming up, let’s take a look at his styles and separate fact from movie fiction — let’s talk about Center Axis Relock and the evolution of John Wick’s fighting styles.

First off, let’s talk about what’s awesome about John Wick… Freakin headshots! The dude goes straight for the finish. Headshots aplenty, because that’s how you end fights immediately with a pistol.

If you look at the movie critically, his gun handling is excellent (and there are lots of John Wick guns). He has definitely been well trained, but his actions on onscreen are highly stylized. That’s one of the tough things when talking about the gunfights in John Wick, remembering that despite how awesome it looks, it’s still a movie and some things are done simply because they look cool. One of the most controversial things as far as the difference between Hollywood and real life is probably the extensive use of the Center Axis Relock. With this technique, the pistol is held in a stylized stance, almost like a compressed Weaver, in front of the shooter’s face.

Supposedly it helps when in a CQB environment, which is total bullshit. Here’s the deal…ready for it?

Hardly anyone that really hunts bad guys for a living uses this. 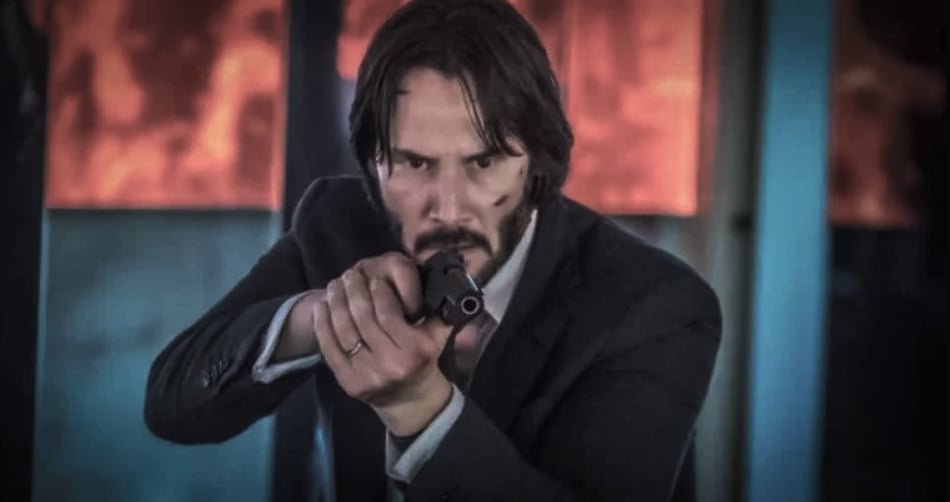 When you’re hunting for assholes, you don’t want your hands in front of your face. You also don’t want your pistol crossing the threshold of a doorway before you do. That’s a great way to have your pistol bashed into your own face during a fight, but whatever. That being said, it looks badass. In fact, it looks very similar to some stances from Iaido, and with the Director of the film stating in print that he was influenced by Samurai films, it’s easy to see why this particular technique was used. As far as actually running his pistol, I’ve seen clips of Keanu working with some Israeli guys and it looked like a total shitshow.

Luckily he also worked with Taran Butler, who seemed to get all of the lameness out and had him absolutely shredding. I’ve shot with Taran before, and I know how hard he works to get his actors on point. Of course, when it came time to burn down targets, all of the stylized bullshit went out the door and Wick used a solid Isosceles with high thumbs forward. Just like the rest of us do. His long gun handling was also on point, and you could tell that he put in lots of work here with Taran as well. That’s why his long gun manipulations reflect some very mainstream techniques. I actually broke down the film that Taran released of him in slow motion, and besides some little stuff like looking his gun into his holster, his manipulations and accuracy are very impressive.

It’s gratifying to see an actor give a shit like that.

Next, let’s talk about his empty-handed combatives. Remember folks, it’s a damn movie! It’s completely and totally choreographed. Many of the scenes defy logic and gravity at the same time. But the fact that the star has spent so much time training in Judo, Traditional Jiu-Jitsu, and Brazilian Jiu-Jitsu allows him to really sell the fight scenes and make them look not only plausible but very grounded in reality. If you watch the movie enough and you also pay attention to the trailer for the sequel, you can really see the elements from all of the previous mentioned martial arts. I’ve also seen a little kickboxing and Krav Maga thrown in there, but with the “gun-fu” style of the action scenes, the thing that has impressed me most is acrobatic take-downs where the actor actually keeps his weapon pointed in a safe direction. It’s obviously choreographed, but Reeves’s ability to pull it off shows not only his athleticism but also his dedication to the craft. The martial arts he trains in don’t care if you’re a movie star, they only care that you put in the work. He obviously does.

In this day and age of legions of Hollywood elite lining up to deprive us of our rights, It’s not often that an actor like Keanu Reeves is willing to put in the work, the sweat and the blood to portray his character in a manner that actually impresses the firearms community. Likewise with Director Chad Stahelski, who decided to let the physicality and hard work take precedence over computer-generated bullshit. I know that many in our community no longer go to the movies because most of the people starring in them detest our culture, but if you only see one next year, go see John Wick 4. They give a shit where most don’t, let’s support them with our cash and enjoy the anchor shots.

Note: Center Axis Relock does have its adherents, obviously. You can read Matthew Collins’s opinion on the matter on Pew Pew Tactical.

Here’s the originator of the technique talking about it several years ago before his untimely death by cancer.

Here’s a little more on it from just a couple weeks ago (as of this writing).

Jeremy Stafford
Jeremy Stafford has been an LAPD officer for nearly 20 years and was a Marine as well. He's a court-recognized Use of Force and Firearms SME who has worked many assignments over the years - Patrol Officer, Field Training Officer, Narcotics Officer, a tour undercover with the Counter-Terrorism Bureau, and Senior Firearms Instructor at their academy. He's a combat veteran of Iraq, where he helped rebuild the Baghdad Police Department and helped develop the first Iraqi Police-USMC joint patrol program. He served in SE Asia as a CT liaison, in the Horn of Africa in a similar capacity, and is the recipient of the Bronze Star with "V" for Valor. Stafford is an accomplished Krav Maga instructor and a longtime mentor in various youth programs, including for the Spartan Race. Stafford is a prolific writer whose work can be found in dozens of publications.

Shooting Drills – You Do Use Them, Don’t You?

The Boomstick — The Best Shotguns of Film

Covert and Crazy — The Special Weapons of World War Two