Though protests and civil unrest seem to have begun subsiding in many places, they have not yet done so in Seattle. Specifically, demonstrations continue in part of Seattle’s Capitol Hill neighborhood. That area is (or is part of) the Eastern Precinct of the Seattle Police Department (SPD) — the headquarters of which was boarded up and, according to some sources, abandoned. Staffed or not, the SPD’s East Precinct was quickly covered in graffiti. The area around it was soon barricaded off and labeled, among other things, a “cop free zone”. Many signs and graffiti there read Capitol Hill Autonomous Zone (CHAZ).

Social media posts and other e-chatter relating to this area have evidenced tents going up within greater numbers of barricades, the addition of portable restroom facilities, and rumors of a “community center” to be made from the boarded-up SPD building. The area isn’t particularly “autonomous”, given city functions that work in and around it, but it has certainly gotten people’s attention, and not just locally.

The fact that actions like these could lead to a suspension of the Posse Comitatus Act and subsequent deployment of active-duty military personnel doesn’t appear (as of this writing) to be getting much traction. That can and probably will change: it wouldn’t take much mental footwork to equate a barricaded, police-less autonomous zone with “…impracticable to enforce the laws of the United States…by the ordinary course of judicial proceedings”. That’s some of the wording used in 10 U.S. Code § 252, The Insurrection Act.

There will be pundits and scholars who say something to the effect of, “It’s one thing to protest and stage marches. Violence and unrest are often a secondary order of effect from demonstrations, this is no surprise. Declaring an area, however small, to be free of US sovereignty is entirely another.” 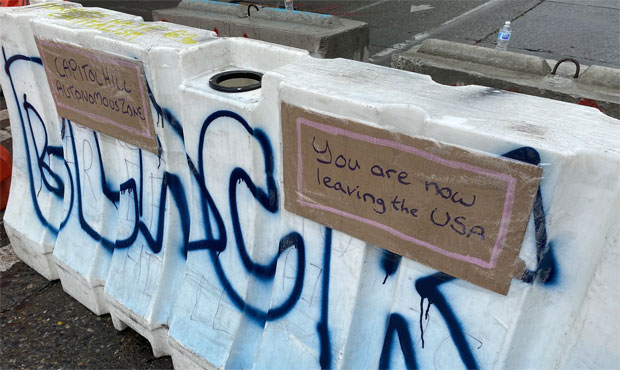 Maybe they’d be right to say that. Maybe this is just a temporary, pseudo-hysterical cause célèbre that will go away in the next big news cycle, whatever that is (murder wasps, plagues, etc.). But we’ve already seen that it doesn’t take much to get POTUS’s dander up, justified or not. It’s hard to believe he’s not going to take action, even if all he does is issue social media denunciations and threaten military action. Hell the brand new 5th Security Force Assistance Brigade is right there at JBLM.

Meanwhile, elsewhere in the country (particularly in states with less restrictive laws), firearms and ammunition (and maybe mags?) will continue to be in short supply. At least in the interim.

The next few days will be interesting. We’ll keep an eye on things and update periodically.

5 thoughts on “The “Capitol Hill Autonomous Zone” – wait, what?”