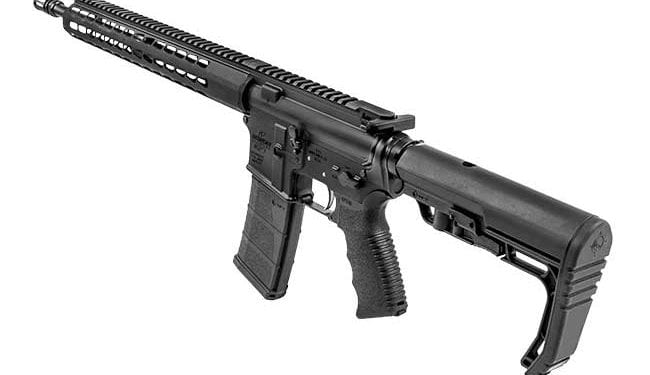 Just weeks ahead of the 2017 SHOT Show, Bushmaster announced a new AR-15 rifle called the Minimalist-SD. The new gun is designed to be light and rugged with a feature set that should please a large number of shooters. Rifles will be offered in both 5.56 NATO and 300 BLK.

Starting with the core of the rifle, the Minimalist uses a forged 7075 receiver with a black hard coat anodized finish. The upper matches the lower in both construction and finish.

Wrapped around the barrel is an AAC Square Drop hand guard. Made of aluminum and black anodized, the hand guard is free floated. The Square Drop has a Picatinny rail in the 12 o’clock position and KeyMod attachment points at seven angles around the surface of it.

The pistol grip, 30-round magazine and stock are all provided by Mission First Tactical. MFT magazines are a bit of an unknown to me, so I would opt to use 30-round Lancer Advanced Warfighter mags if I was planning to use this rifle as a self-defense tool or patrol rifle. The Lancer magazines use a polymer body with hardened steel feed lips for excellent durability. Additionally, the anti-tilt follower used by Lancer is said by some to be one of the best in the industry.

The MFT Minimalist stock is used, which matches the low weight design of this rifle. It is adjustable for length and has a QD attachment point for a sling. A rubber buttpad finishes off the stock and provides a solid mount when shouldering the rifle.

A really nice add-on is the use of the ALG Defense Advanced Combat Trigger (ACT.) I’ve become a fan of ALG Defense products and the ACT is one of those that I really like. This trigger is similar to a standard milspec trigger, but one that is very smooth and polished instead of gritty like some of the factory triggers on AR rifles.