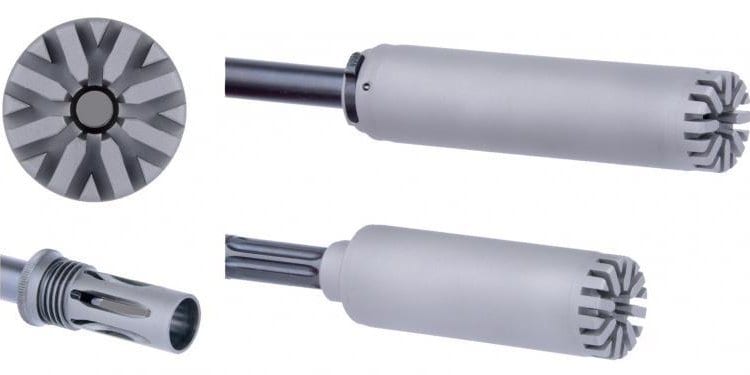 Unless you’ve been living under a rock, you’ve no doubt seen products from the pricy German arms maker, B&T.  From their KRISS Sphinx-with-a-stock Universal Service Weapon, to their blocky pseudo sub-guns and high-end piston-driven rifles and bolt guns, B&T is known for making quality gear.But this latest addition to their lineup isn’t their first foray into the world of sound suppressors, not by a long shot. B&T has been designing and manufacturing cans for all manner of firearms including handguns, submachine guns select-fire carbines and big-bore rifles for years.

Their latest product follows the same tradition of Swiss quality and applies it rifle sound suppressors – the MARS.

The MARS or ‘Miniature A… Rifle Suppressor’ is a lightweight can built from ultra-durable inconel and a proprietary material they call, ‘Thermax’. All models are 39mm in diameter and are available in any color a shooter wants, so long as it’s grey.

The MARS is different from previously offered models, in that it was designed from inception for select-fire rifles with input from special forces operating in the Middle East.

“The all new M.A.R.S. (Miniature A… Rifle Suppressor) was designed from the ground up to be a small, light and effective a… rifle suppressor. The inspiration for the product came from customer feedback on actual experience in Iraq and Afghanistan. The M.A.R.S. sets the new standard in its class”

Available in four configurations and two calibers (5.56mm and 7.62x51mm), this new suppressor appears to be designed around hard military use and squad tactics than civilians trying to get the greatest reduction in decibels.

In fact, the company advertises its full-auto rating as, “Until it’s glowing red” as opposed to a specific round count!

Models available in either direct thread or quick detach that uses a proprietary flash hider with oversized external threads much like a SilencerCo ASR mount. Additionally, the end cap of the can incorporates a 16-slot flash dissipator to help hide the muzzle blast when the can is attached to short barreled carbines.

No word on price or availability yet, but for those of you interested, I’ve included the full text of the press release below.

For the last 26 years, B&T has been the industry’s premier suppressor producer. In that time B&T has not only been chosen to produce suppressors for most of the Europe’s small arms manufacturers but also for most of Europe’s armed forces. In this time B&T has come to understand of the evolving needs of end-users. This experience is based on actual combat experience in Iraq, Afghanistan and many other places. In essence, requirements have evolved over the years and B&T has evolved its products to perfectly serve the new needs of its customers.

The new requirements are:

To meet the requirement for a light suppressor, the services will accept suppressors to be semi-disposable, not unlike the expected service life of a magazine or a barrel. Gone are the days when B&T would produce a suppressor that will out serve the rifle itself. Exchange of experience with units returning from combat zones has taught B&T that noise reduction is not as important as flash reduction. The reasons for this are simple to understand. The human ear cannot tell the difference between the sound that is 139 dB vs. something that is 136 dB. As long as it is below 140 dB this is important because this is where permanent hearing loss will occur.

The human eye however is immediately attracted to light, even if the muzzle flash occurs in the peripheral vision. During night or hours of twilight, the attention of the enemy is attracted to the muzzle flash and that is where fire is returned. Therefore the reduction of the muzzle flash is paramount and one the two primary design goals of the M.A.R.S. And as extensive testing shows, this goal was met and exceeded. The weight of suppressors is also becoming an issue.

This is especially true in dynamic combat situations, a light suppressor, that will not change the balance of an a… rifle while at the same time does not extend the length of a rifle too much, is a must. Besides that weight saving at soldier’s equipment, wherever possible, is becoming more and more important, as today’s soldiers are required to carry huge loads, easily exceeding 50 kg. Communication, night vision/thermal devices, illuminators, GPS, spare batteries for everything, not to mention body armor and ballistic plates. Every Gram of weight reduction is a benefit. Therefore weight reduction was the other most important design goal during the development of the M.A.R.S.

This goal was also not only met but exceeded, as the M.A.R.S. is the lightest a… rifle suppressor in its class. The new B&T M.A.R.S. line (Miniature A… Rifle Suppressor) was not only designed based on the input from elite military forces in NATO, but were also field trialed in close collaboration with these units. Field trials proved that the M.A.R.S. does meet and exceed not only today but also future requirements. As the requirements of our customers are different, B&T offers two models of the M.A.R.S. The first one is the M.A.R.S. – QD (quick detachable) and the second one the M.A.R.S. – DM (directly mounted). Both models serve perfectly the different needs of different customers, depending on the mission.