Low powered variable optics have seemingly taken over the AR optics realm. Why not? They are superbly versatile. The AR, and similar semi-auto rifles, can be used at ranges that vary from five feet to 500 yards. A good LPVO allows a shooter to be faster at 5 yards and more precise at 500. LPVOs vary greatly in magnification range, size, and of course, price. The best LPVOs come at a premium price point, and not everyone looking for an LPVO needs to spend two grand on one. For the masses looking for an affordable, functional, precise, and well made LPVO, the Athlon Argos BTR Gen 2 might be the answer.

The Athlon Argos BTR Gen 2 is a mouthful to say, so let’s just call it the Athlon Argos. This 1-8 power optic comes with a second focal plane reticle. The reticle sports an illuminated reticle as any self-respecting LPVO should have. The Athlon Argos has a rigid 6061 T6 aluminum, one-piece body. 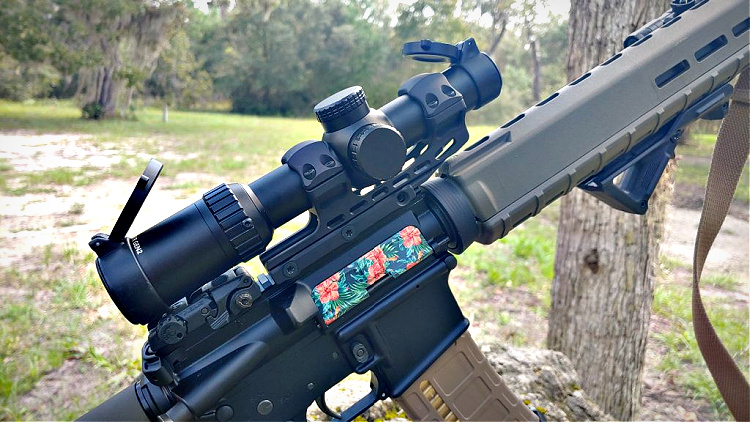 The optic features a water, fog, and shockproof design. The Athlon Argos weighs 16.1 ounces. The Athlon Argos is 9.8 inches long and has a 30mm tube diameter. The optic has an MSRP of $474.99 but sells for a hundred bucks less at most retailers.

LPVOs have become well known for their interesting reticle designs. Every company tries to do its own thing and find the right reticle for both close and long-range shooting. The Athlon Argos utilizes the proprietary ATSR5 reticle.

LPVOs are supposed to be proficient at both close quarters shooting and moderate range engagements. For that kind of mission, a reticle must be designed for it and purpose-built for both roles. The Athlon Argos has a versatile and well-designed reticle that encompasses a large three-quarter circle, with a Christmas tree descending from the three-quarter circle. 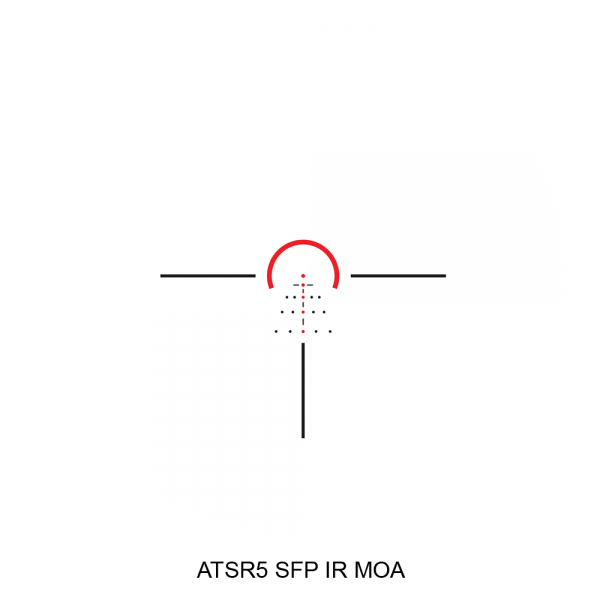 As you dial in the magnification and range for more precise shots, you turn to the small dots and Christmas tree. The Christmas tree allows you to adjust for bullet drop, and each horizontal circle represents a 5 MPH wind call. The center vertical drop points act as a BDC for 5.56, and with a 50/200 yard zero, the dots will allow you to compensate for drop out to 600 yards.

Once the optic was mounted and zeroed, it was time to step in, step out, and shake it all about. I stepped into the 25-yard line and tested the optic against several close range, multi-target engagement drills. I’m uncreative and utilized some of my favorite close-quarter drills you’ve seen me mention more than once.

My drills included basic snap drills to the torso, failure to stop drills, and box drills. The three-quarter circle will get you on target and let you drop rounds accurately enough at close range. It’s not as fast or as precise as a dedicated red dot, but it’s acceptable. I learned that if you need to make a well-aimed shot, the third dot in the drop table will compensate for mechanical offset. Obviously, unlike a red dot, the eye box is more demanding and much less forgiving. The eyebox can create a challenge when you are shooting from odd angles at close range. Your speed is going to be compromised if you don’t have a clear and clean presentation.

The biggest downside in using the Athlon Argos for close-range shooting is the illumination. In bright daylight, it leaves a good bit to be desired. You want a nice, bright, easy to see reticle for close quarter’s shooting, and this one can be a little dim during the brightest parts of the day.

Moving Back… Way Back

Moving back to 200 and 300 yards, I was able to open up a bit with my rifle. I tacked the Athlon Argos to my Aero precision M16A4ish clone, and this behemoth is a fun blaster at longer ranges. Unfortunately, with the COVID quarantine in effect, finding good stretches of land has been challenging. At 200 yards, I worked from 4 to 6 power in the modified standing and kneeling positions. I worked various steel targets that ranged in size from a 10-inch steel gong to an IPSC sized steel torso. I spent more time on target with the IPSC torso and other larger targets.

Even though I suck and need practice, I could see the gong perfectly fine! The glass is quite good and provides a nice clear picture of the smallish target at 200 yards with the magnification jacked up to 8X. Moving back to three hundred yards and assuming a prone position, I fired slowly and scored nothing but hits on the IPSC torso.

At that range, I could use the 300-yard mark on the reticle to compensate for bullet drop. My 20-inch barrel and 62-grain ammo aren’t exactly what the BDC is tuned for, but it was close enough. A torso is a huge target at 15, 25, and even 50 yards, but at 300 yards, it looks awfully small, even with 8X magnification. However, the ego-stroking supported prone position, and Athlon Argos proved to be a successful combination. Ding, ding, ding, and I could go on and listen to the sweet song of lead hitting steel.

At 300 yards and beyond, the picture starts looking a little fuzzier. You won’t confuse the Athlon for a Kahles, but the image is clear enough to determine what’s a target and what’s a target stand. The Athlon Argos worked surprisingly well for its relatively low price and is quite precise for a budget optic.

The Athlon Argos isn’t quite a ramen noodle LPVO, but it’s still relatively affordable for most shooters. Athlon advertises the optic for multi-gun matches and sport shooting and that’s the perfect role for this optic. For me, it allowed me to dip my toes into the LPVO world without spending a fortune. It’ll last as I save my pennies for the Vortex Razor 1-10X. What do you folks think?

If not, what’s your budget LPVO of choice? Let us know below. Or don’t I can’t tell you what to do.