Double drums have been in use since about 1930, where German forces employed the MG13 light machine gun using a 75-round stamped steel design, as well as the aircraft-mounted MG15.  Even the precursor to, “Hitler’s buzzsaw”, the MG34, was modified to use similar drums.

Aside from the Wehrmacht’s use of double drums, the majority of drum magazines used in the Second World War were actually shells that housed short belts of ammunition. (This was a rudimentary solution to converting a stationary MMG to a mobile LMG) While single drum magazines remained relatively common with ComBlock light machine guns like the RPK and even showed up occasionally on modern designs like the Ultimax 100, double drums virtually vanished until the early 2000s. The only exception being the Beta Systems C-Mag.

Then came the Armatac CL.

The first run was made from billet aluminum. The design is strong but heavy and expensive at nearly $800. The drum’s claim to fame was high reliability. See, the advantage of double drums over single varieties is twofold:  Increased capacity without increased height, and better reliability by utilizing two springs to provide more even, stronger magazine spring tension.

One aspect that sets the Armatac apart from competition designs like the Beta Company C-drum, is that it doesn’t graphite lubrication. While not a large concern for civilian shooters, soldiers utilizing drum magazines in dusty or sandy environments often lack access to cleaning supplies, and thus can’t regularly maintain their equipment. Still, the magazine’s heft left something to be desired.

Thankfully, as sales of the original CL increased, Armatac was able to manufacture a lighter, less expensive version using high-impact polymer moldings. This new lightweight model sells for half the price of the original while boasting better tensile strength. Additionally, the polymer SAW-Mag weighs only 4.9 pounds empty and around 8 pounds loaded with 150 rounds of 5.56mm ammunition. That’s a lot of firepower in a very lightweight, streamlined package.

However, the Armatac basically weighs the same as equivalent ammo loads in separate magazines — so why would someone bother with the more expensive drum?

For starters, the drum doesn’t need to be reloaded as often and has the same vertical profile as a 30-round magazine. This makes it ideal for overwatch or suppression since the user can remain in the prone position with 150 rounds ready to unleash on any targets of opportunity. Also, it can be used as a makeshift bipod — the drum’s wide, flat bottom can be used as a steady support. It even features a central trough for the support hand and can be utilized offhand with good balance.

Unlike most drum magazines, SAW-Mag proved very reliable and tolerant of dusty environments. It’s also very robust: Armatac videos show a fully-loaded drum being bounced off concrete pads and emptied out the business end of fully automatic weapons with no malfunctions whatsoever. While the mag’s excellent reliability is due in no small part to the design, it’s also aided by the high-quality manufacturing done by Superior Arms — a new company that purchased Armatac several years ago and continues to support the brand.

The main benefit of this magazine is the capacious reserve of ammunition available without a reload. While most effective in heavy barreled LMGs or SAWs, the CL enables even standard AR-15/M15 carbines to act as makeshift support weapons in a pinch thanks to the firepower it provides. Most importantly, it keeps all the ammunition clean in dusty environments. In a vehicle moving through clouds of dust raised by the rest of a convoy, every link on an exposed belt and every top of a box magazine being swapped introduces more sand into the rifle action. SAW-Mag doesn’t have that problem, being sealed from the elements. 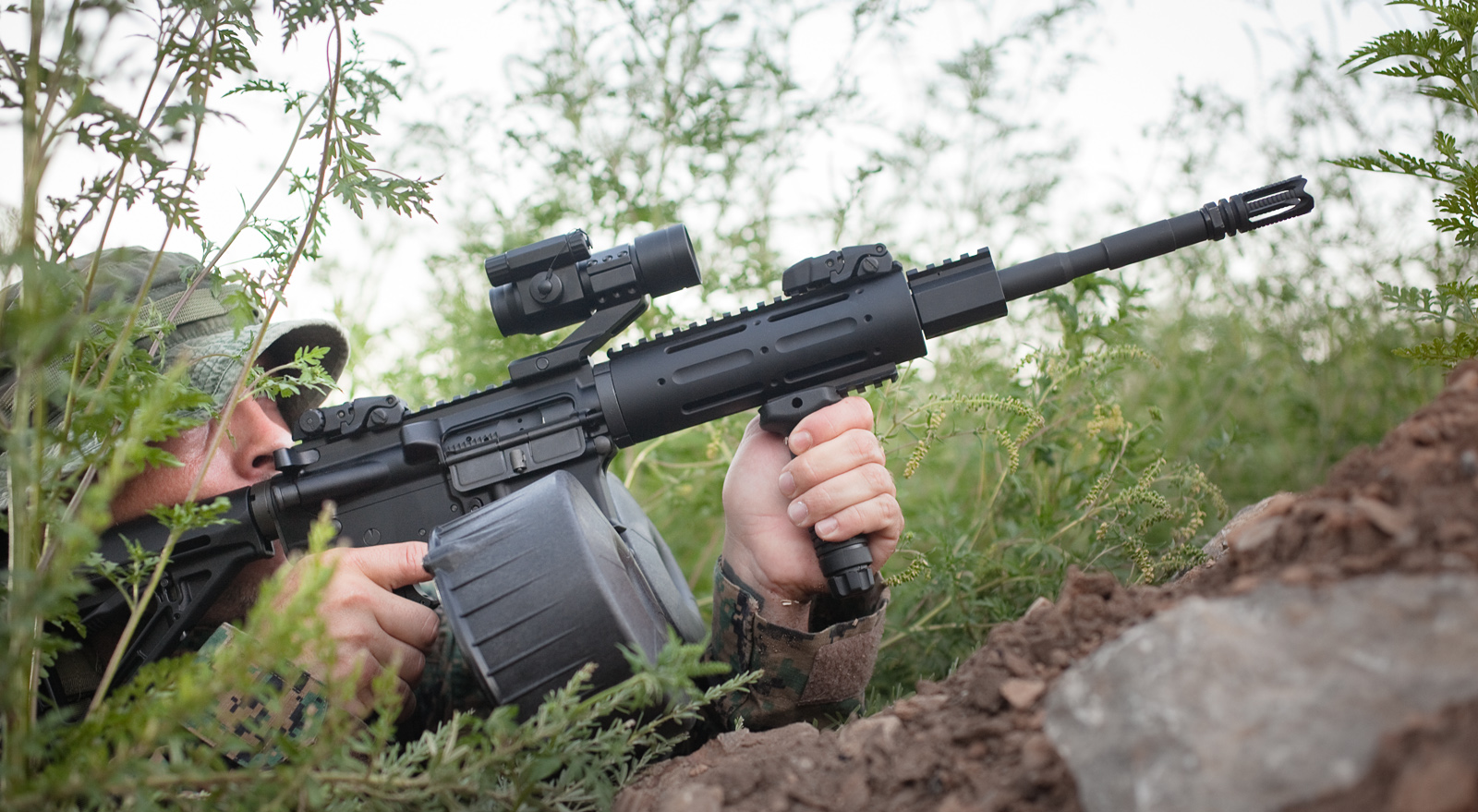 For transport, a shoulder bag is available. The magazine may be attached to the weapon while still in the bag, though the bag lacks a pocket for a loading device — a vital accessory given the heavy springs within. These heavy springs are remarkably reliable and are guaranteed for 300,000 rounds cycled. Disassembly is straightforward and simple, requiring the user to remove four screws. Also, maintenance is minimal – only plastic dummy cartridges that function as followers should be inspected periodically.

In sum, the Armatac SAW-Mag has a reliable design with a clear use niche. It can be used with semi and fully automatic weapons, having been tested at cyclic rates up to 1100rpm.