7 Guns for the Space Force – for the Emperor! 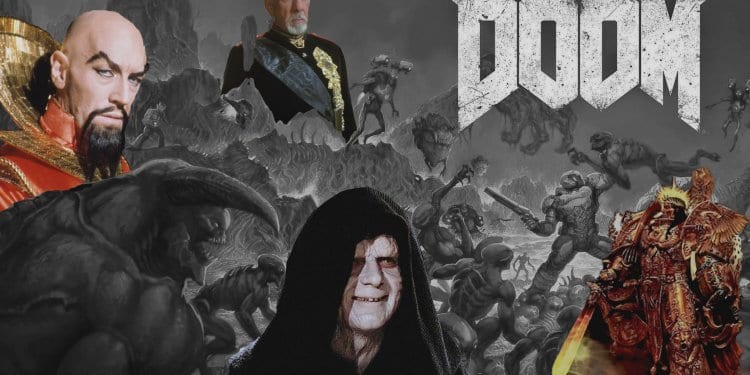 With the recent creation of the newest branch of the armed forces, we find ourselves looking towards the stars. Looking up at the wonders of the universe… and figuring out how to conquer them. Space will most certainly be divided amongst the US Empire, the Chinese Confederation, and private SpaceX Musk-zones. War never changes, but the weapons sure do. We’ve taken a few minutes to think up our 7 favorite weapons for starfaring.

These are all guns for the Space Force!

The old Stargate team was once armed with the famed P90 SMG and the US Government may want to save money and move these futuristic weapons from one force to another. The P90’s distinguished design gives it a real space force vibe (and has already been defending the Stargate beneath NORAD). It also invented the genre of personal defense weapons. 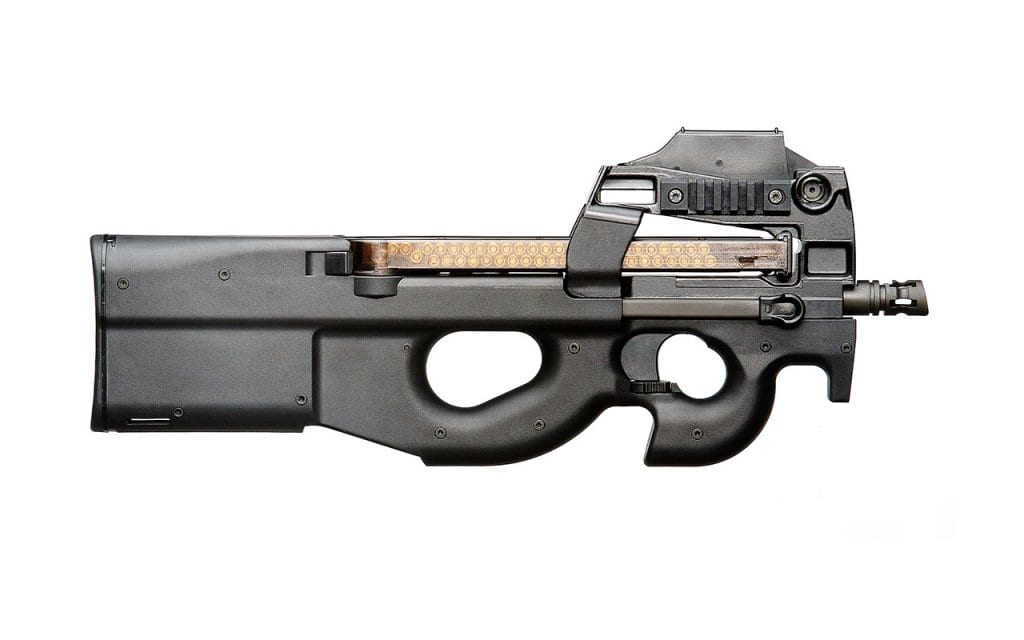 PDWs aren’t quite rifles and aren’t quite submachine guns. The P90 fires the soft armor piercing 5.7 round and can share ammo with the FN Five-Seven. Fabrique Nationale has a long history of arming American forces so it’s only natural they would put the P90 into play for the Space Force contract.

This tiny gun would work perfectly in the tight confines of ships and space stations and deliver potent, space suit shearing rounds at a rapid cyclic rate.

Futuristic handguns aren’t really a thing. I coulda tossed the Five-Seven in here, but that would really be tossing tons of FNs on the list. No, instead  I went with the futuristic looking, South African CP1. The CP1 has lots of Space Force worthy sci-fi credits to its name. It was in the Fifth Element, Space Truckers, Babylon A.D., the Outer Limits, Dark Angel, Firefly, Battlestar Galactica, Ghost in the Shell, and even Stargate SG-1. 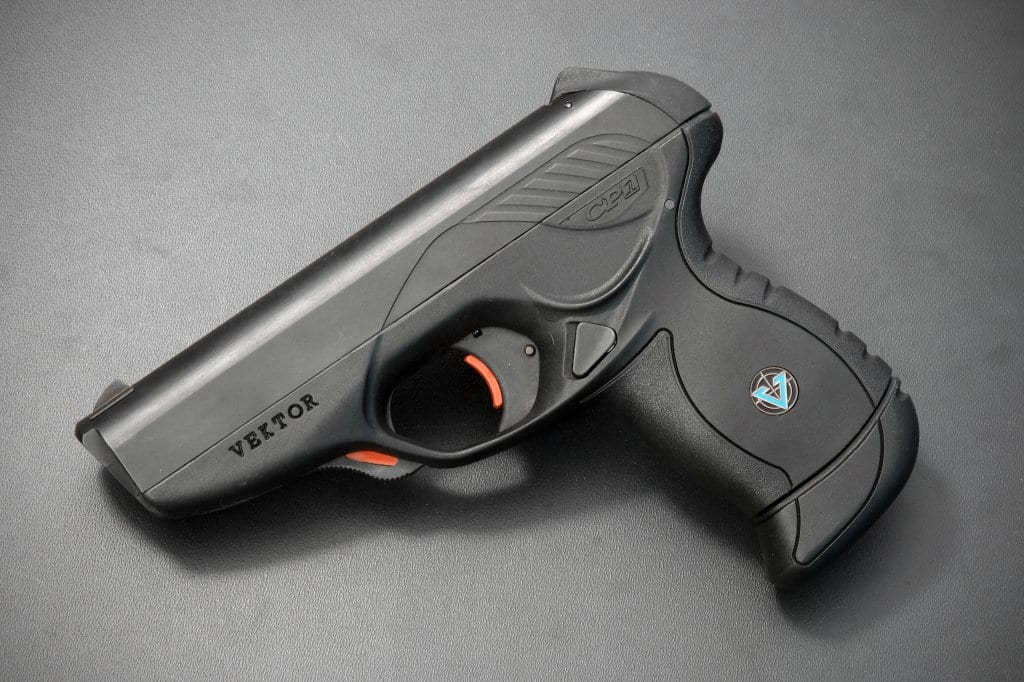 It’s an attractive weapon with a unique look that makes it fit right in with Space Opera, Space Action, and Sci-Fi motifs. If looking cool is half the battle then the Vektor CP1 is winning the war. I imagine the futuristic version of Boomers, aka Space Boomers, will sit around yelling how the CP1 won two galactic wars.

The CP1 is an interesting gun. The safety is positioned inside the trigger guard and pushed outwards to make the weapon ready to fire. The CP1 uses a gas delayed blowback system similar to the Walther CCP and the HK P7. It’s an SAO gun with an internal hammer and feeds from a 13 round magazine. It was chambered in 9mm only.

Imagine being in the first waves of troops to invade Klendathu. You’re going to fight a war with the bugs and you can’t wait to kill ‘em all. You’re strapped into your power armor complete with a helmet that aims your weapon for you. Your weapon is the Knight’s ChainSAW and you wield it for the God-Emperor.

Or the Federation or something.

The ChainSAW is a light machine gun that lacks a stock and pistol grip, instead, it’s a gun with a chainsaw grip in the front and another grip over the top. You fire the ChainSAW from the hip as you slowly walk towards your swarm of enemies.

Your belt-fed blaster is built of an ancient earth design from a Master at Arms known as Eugene Stoner and manufactured by the forge known as Knight’s Armament. The gun sprays the newest incarnation of 5.56 because the army finally stopped with the 6.5 meme and used common sense.

The ChainSAW was useless pre Space Force because firing a machine gun from the hip is difficult. However, with your power armor and helmet, the ChainSAW is aimed via a wireless link up between gun and helmet making the gun almost 100% accurate. The gun is lighter than any other LMG and the constant recoil system minimizes recoil greatly.

The ChainSAW made no sense on earth, but in space, no one can hear you bitch about impracticality.

Do you think HS just makes Springfield handguns? Ha, the VHS-2 represents the best Eastern Europe has to offer when it comes to bullpup weapons design. The VHS-2 won’t play your copy of Space: Above and Beyond, but it does play the song of the Croatian people. 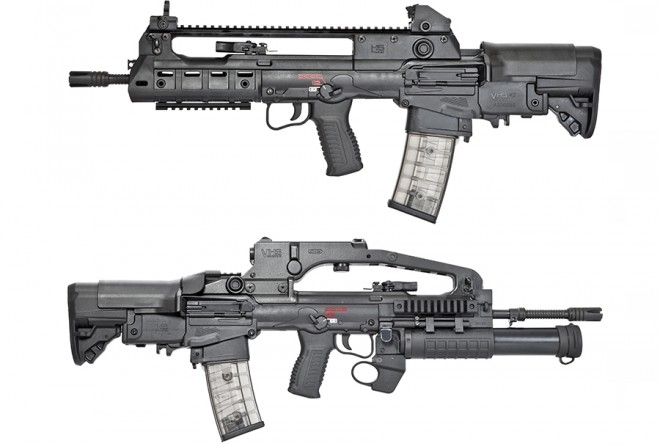 The VHS 2 is proof that you can make a gun look super sweet and futuristic as long as you shrug off the chains of Communism. The VHS 2 is a bullpup design that fires 5.56 NATO rounds. It features a 1.5X integrated scope or a Picatinny scope mount and is compatible with 40mm grenade launching attachments.

The VHS 2 is an oddball bullpup that allows the user to adjust the length of pull with an adjustable buttpad. This makes it perfect for use inside and out of your space suit or power armor. The VHS 2 allows for completely ambidextrous magazines and those Croatians were smart enough to make it take AR mags. When the COvenant comes you’ll be able to combine the plasma pistol with this gun for near-instant kills.

The desolate halls of an abandoned space station await you. There are potentially space demons from a universe you can’t possibly fathom awaiting you. They are berserk, brutal, without mercy. But you. You will be worse. Rip and tear until it is done.

The TS 12 is perfect for dispatching aliens and space demons and is just generally handy to keep around for close encounters. The TS 12 is a bullpup shotgun that uses three rotating tubes, each holding 5 rounds of 12 gauge ammo. This gives you a semi-auto shotgun capable of launching 15 rounds of brutal mayhem against whatever scum-sucking xenomorph is in front of you.

The TS 12 combines the best parts of a standard shotgun with a futuristic set of ergonomics and tons of ammo. At any given time you can be loading two tubes while still firing one. This allows you to take the old shoot two, load two to extremes. This futuristic shotgun can also run different types of ammo in each tube. This gives you buckshot for general purpose, slugs for shooting across docking bays, and specialty ammo like dragon’s breath for dealing with mold based threats.

The TS 12 is a compact, but Hellacious close-quarters weapon.

The HK G11 is the OG space force weapon. It was conceived in the wild 70s, where cocaine and hookers were the muses for gun designers. The G11 was ahead of its time but would be perfect today. The gun used caseless ammo, a top-loading disposable magazine, and fired so fast you could dump three rounds and only feel the recoil of one. The gun was capable of firing 2,100 rounds per minute. 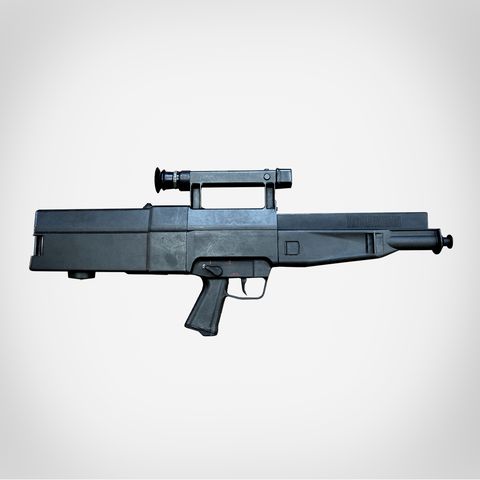 The G11’s mechanism was superbly complicated. See, the Germans took the idea of a clock and made it deadly. The G11 fired a caseless 4.73mm round from a 50 round magazine. The ammo was smaller and lighter than 5.56 and would make it easy for the individual soldier to carry hundreds of rounds without being weighed down.

The G11 was sadly too far ahead of its time. Now that the Space Force is in action, why can’t we bring back HK’s old girl and give her a go? It would be perfect for hunting smugglers and space pirates, raiding space meth labs, or bringing democracy to a planet rich with black matter fuels. Did I mention you could mount a bayonet to it? 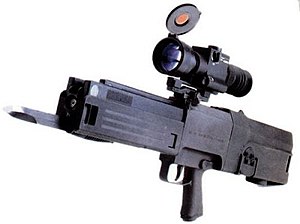 7. For the extra-terrestrial Poors – Hi-Point Carbine in a High Tower Armory Bullpup stock

So there you are, sitting in your space trailer park, or maybe chillin’ in a space ghetto slurping back Space Natty Lights, and wishing you had something less conventional than your normal Hi-Point carbine. Money’s tight, beer is expensive, and you have a lot of money tied up in restoring that 2005 Pontiac Sunfire.

If you had joined the Space Force you’d have money, but you woulda punched that drill instructor in the face the first time he yelled at you. 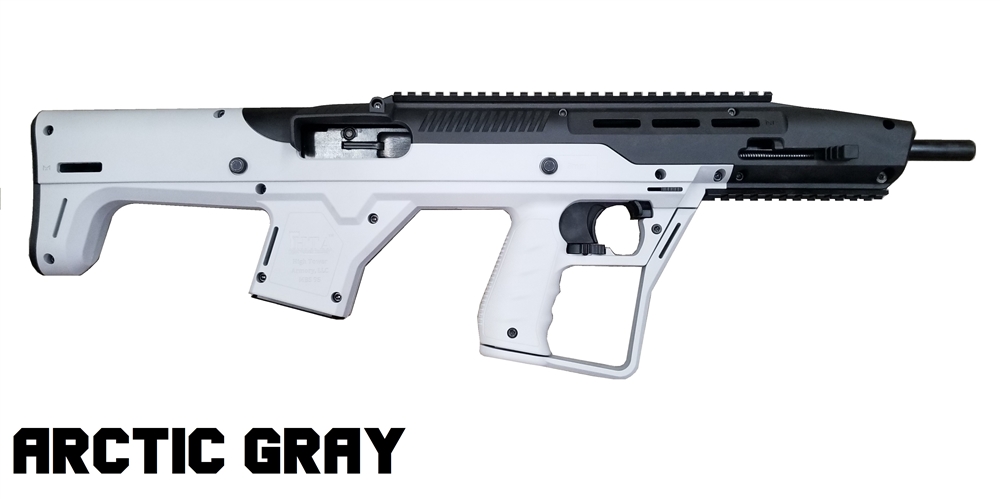 Best of all it will more than double the value of your Hi-Point. It’ll shrink the overall length to 26.25 inches, and gives you plenty of rail space and M-LOK room to mount whatever you need.

The Space Force Needs You

Listen gents space ain’t gonna colonize itself. Better get while the gettings are good. Join the Space Force, get your Space Force gat, and marry the first three-tittied blue alien you meet. We can’t do it alone. Lotsa places need democracy and who else is going to bring it?