In some ways, revolvers are still more forgiving than even the best autoloading pistols available today. This especially holds true for novice shooters and those who simply can’t dedicate much time to overcome the number of user-induced malfunctions and missteps when shooting modern pistols. A modern S&W revolver (for that matter any good revolver) will likely run any type of ammunition, provided that your hands have the strength to run the trigger.

Maintenance is another noteworthy comparison to make between revolvers and autoloading pistols. It takes some time to get to know the disassembly process for autoloaders, as well as the use of solvents and the correct oils and where to put them. With revolvers, however, even with imperfect cleaning, or too little or too much lubricant, the gun will generally cycle. The controls like the cylinder release, the trigger, the ejector rod, and the cylinder window are easy to access and give a cursory wipe down. Most of the moving parts needed for the function of the gun are hidden from ingress inside the frame.

But that is not to say revolvers are maintenance-free. The internal parts that are as so out of sight and out of mind still deserve a look over at times and, if your revolver does have an issue, chances are it is there. Yet most of the folks I know who own a revolver have never taken it completely apart.

When I finally got around to taking apart my favorite Smith & Wesson revolvers, it took me a while to figure out how to get it back together. So I decided to relive the experience in photos to show how the most common revolvers on the market today—the Smith & Wesson J-frame—are disassembled.

Although the revolver is operationally simple, you will need a few tools for proper disassembly.  The bare minimum needed is a set of gunsmithing screwdrivers, a pair of needle-nose pliers, a set of punches ranging from 1/16 to 1/4 inch, and a small pin that is finer than a smaller 1/16 inch punch.

Use either a fitted flathead or hex-head to remove the revolver’s grip screw. From there, the side plate and side plate screws on the right side of the revolver are exposed, as is the mainspring. In the case of modern S&W J-frames, it is a coil spring. In larger guns, a leaf spring is used. 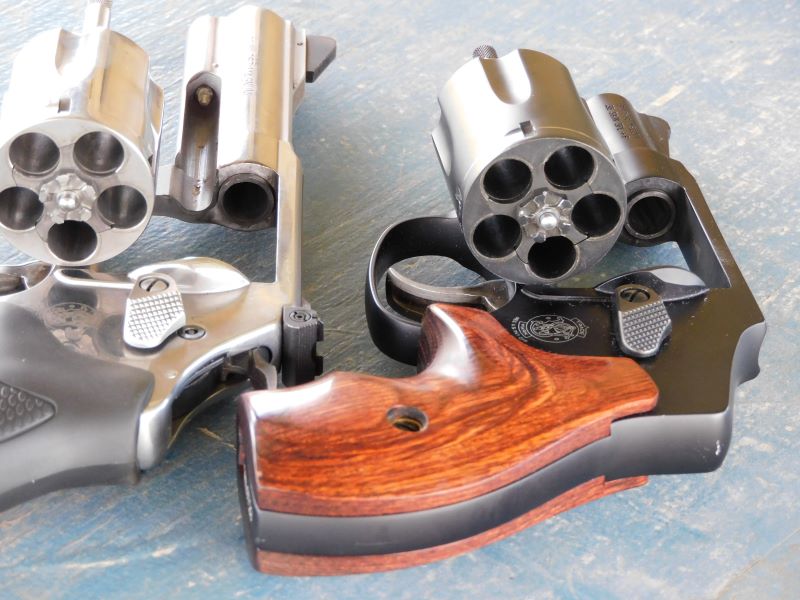 With the hammer cocked or the trigger pulled rearward (in the case of hammerless revolvers), the coil spring will be depressed and a small eyelet can be seen in the spring’s guide rod. Push your small pin into the hole to hold the tension.

The hammer will go limp and you will be able to wiggle the captive spring out of the gun. On larger Smith & Wesson guns, a leaf spring is used, and relieving the tension is as easy as backing out a flathead screw that holds against the spring.

Gentle, controlled turns from a flathead screwdriver will remove those screws. Modern S&W revolvers use three screws, two closer to the grip that retain the side plate directly and a wider screw above the trigger guard that retains the cylinder yoke.

With the sideplate and mainspring removed, there is no tension in the hammer once the trigger is depressed. From here, the hammer can be worked off its pin and removed. 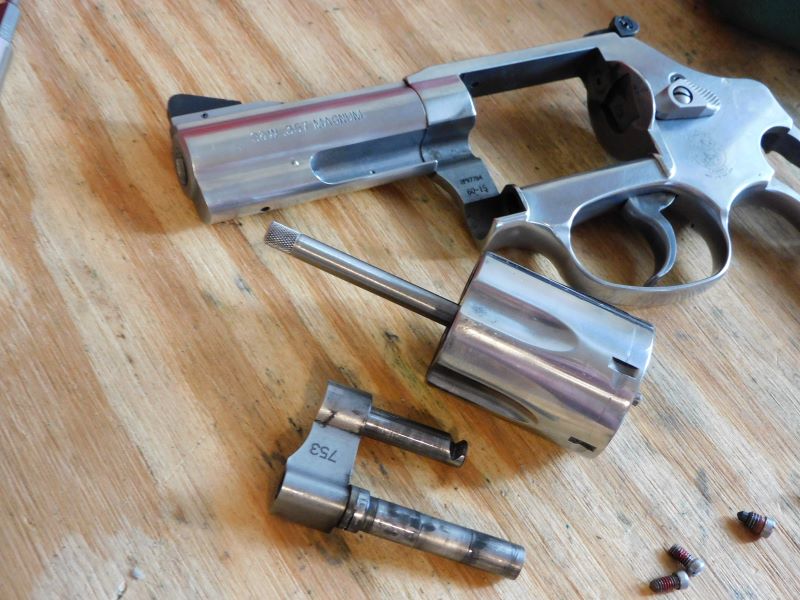 At some point, the cylinder will have to come out. With the cylinder yoke retaining screw already removed after taking out the side plate all that is needed is to push forward on the cylinder release as if you will go to load the handgun. But from there, push the cylinder out of the window and forward. The yoke and cylinder will come off together and can be pulled apart as pictured above. 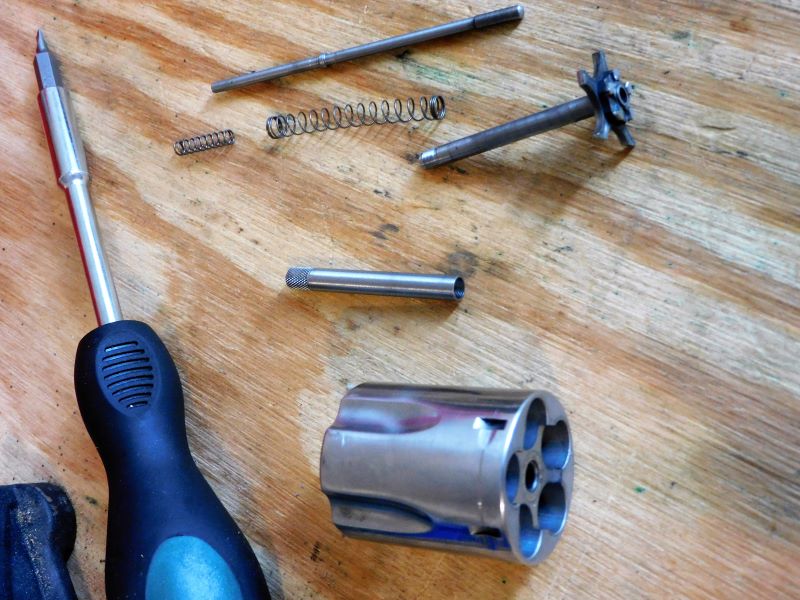 The cylinder and ejector rod assembly can be further taken down by turning the knurled end of the ejector rod’s tip counter-clockwise against the cylinder. To ensure that the ejector rod stays in spec to allow the cylinder to close and open for loading and unloading, disassembly and reassembly will need to be tight. As such, I used a small set of needle-nosed pliers to break the ejector rod loose from the threaded inner assembly. When reassembling, use the same method to snug it back together.

With the hammer removed, the rebound slide must be removed to gain access to the trigger. It rests on spring pressure against an anchor point. Relieving spring tension and working it out can be accomplished with a 1/16-inch punch putting pressure on the lower half of the spring below the anchor pin. It is under quite a bit of spring pressure, so working with a transparent bag over it can help in case the spring goes flying out!

Reinstalling the rebound slide is probably the most frustrating and critical aspects of the process. It is tempting to take a large punch to force the spring into the slide as you pinch it back against the anchor point, but this has to be done with care so as not to bend the anchor point. If the anchor point is bent out of spec, you will not be able to get the side plate back on! I prefer to use the flathead bit on my screwdriver to compress the lower half of the spring as I work it in against the pin so as not to pry against it. This will work but a dedicated tool that won’t interfere with the pin works best.

To pair the delicate with the easy, you can remove the firing pin and its spring by simply removing the firing pin retaining pin. It sits proud and is easy to pull free. Note the flat face of the firing pin. It will have to be sitting at the six-o’clock position as you push it back in with thumb pressure and reinsert the pin once cleaning is done. It won’t reassemble any other way.

8. Remove the Trigger and Hand Assembly

With the rebound slide removed, removing the trigger is as easy as prying back the hand from the recoil shield and wiggling the assembly off its pin. The trigger lever (that shiny ball-peen hammer-like object) can come out of its slot. The hand can be wriggled out of its mortice as well.

If you choose to remove the hand, you will have to deal with the hand spring. The hand spring is a small torsion spring that will require some manipulation with pliers and a fine punch to put return to its position inside its mortise in the trigger before reinstalling the hand. The eyelet is placed downward and the short end of the spring is pushed into the mortice as far as it will go. With the hand started back in its mortise, the long leg of the spring will have to be compressed with a punch and slipped over the hand pins as the hand goes home all the way.

The last major part to remove is the cylinder stop. Pushing forward and out with a punch should be enough to wriggle it off its pin. It uses a small coil spring that is partially recessed in the part. Reassembly requires some light compression on the spring with the edge of a screwdriver as you reinsert the part onto its frame. 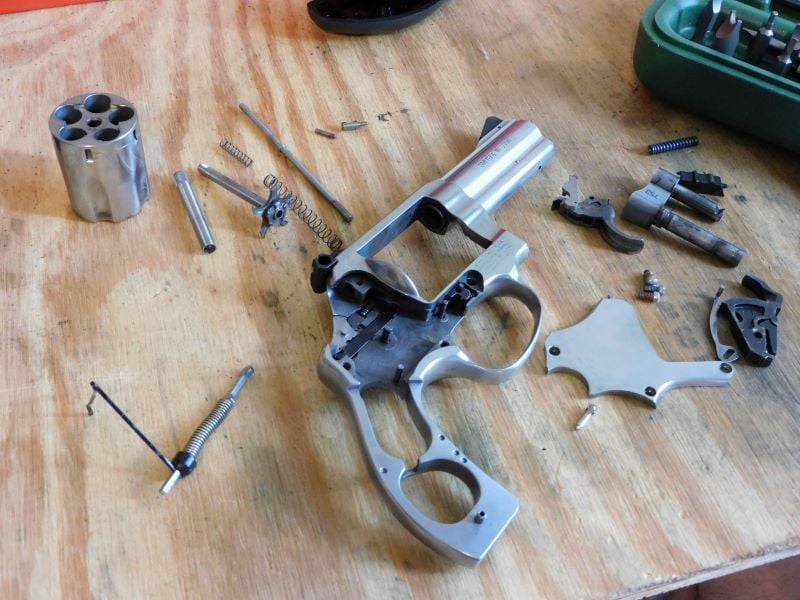 From there, the revolver is reassembled in reverse order. First, cylinder stop, then trigger/hand, then rebound slide, then hammer, then hammer spring. It helps to reinstall the cylinder and cylinder yoke back into the frame, even without its screw. The assembly puts pressure back on the cylinder release in the usual manner and gives more working space when reinstalling the trigger/hand assembly and the hammer.

Complete disassembly and reassembly of a modern revolver shows just how complex these handguns are compared to autoloaders, which can usually be broken down without tools into a few parts.

In my first deep dive, I was taken aback at how well my revolvers work considering all the small parts and springs involved. Getting under the side plate of a revolver is a lot like getting under the hood of a car if you aren’t mechanically inclined. But knowing where the parts are, how they work, and how to keep them in working order will go a long way to diagnosing and preventing problems before they arise.

Gun Mag Skills: How to Clean a Revolver