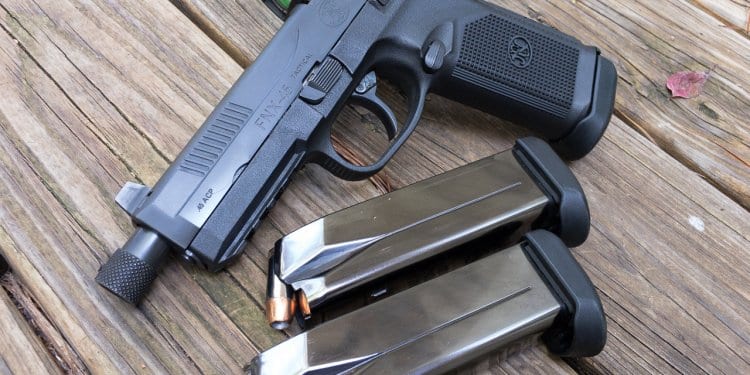 9mm or .45 ACP? The debate never ends, now does it? Most times, a rational discussion comparing the two devolves to an argument of size versus capacity. What’s more important? Size? Or how you use it? The 9mm platform (usually) gives you two smaller bullets for the price of one hefty one for the 45. I mean that in the sense of comparing pistols in each caliber of the same approximate size and weight. A full-size 9mm (usually) holds 16 to 18 rounds. A full size 45 (usually) holds eight. 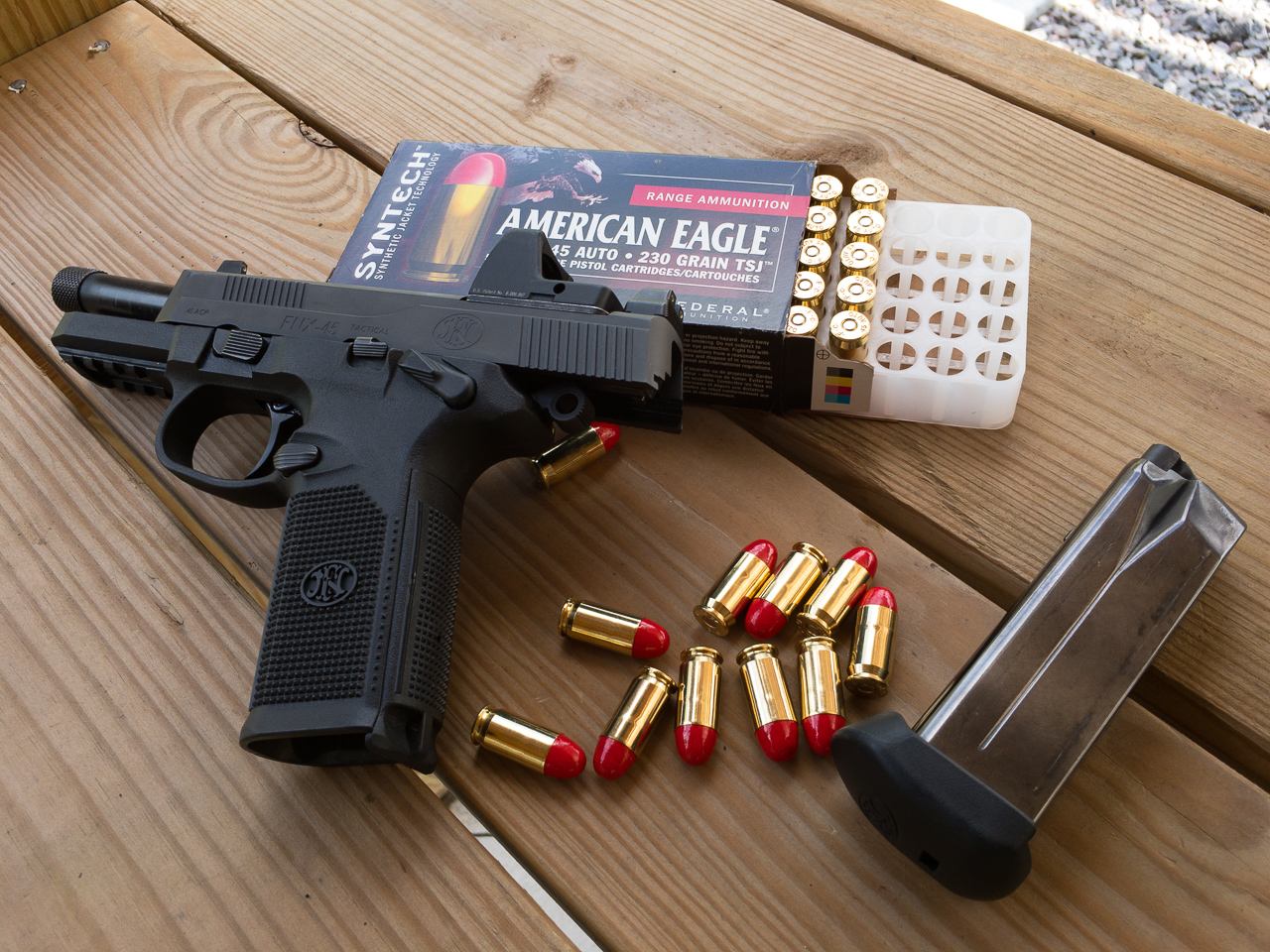 Note the frame safety. It functions as a decocker or a true safety that allows single-action, cocked and locked carry.

Here’s the thing about FN’s FNX 45 Tactical – it gives you both husky projectiles and 9mm capacity, all in a handgun of rational bulk. The FNX 45 Tactical is a double-stack design, and the three included magazines each pack 15 rounds of .45 ACP. Add one in the chamber, and your holstered pistol plus a double mag pouch sends you off into the world packing 46 rounds of John Moses Browning’s (may he rest in peace) preferred 1911 caliber.

Surprisingly, while the gun is full-sized, it’s not obscenely large. In fact, I’ve been carrying it in an Alien Gear Cloak Tuck holster. For a double-stack 45, the magazines and grip are shockingly slender. The FNX does come with multiple back straps to adjust grip size to preference. 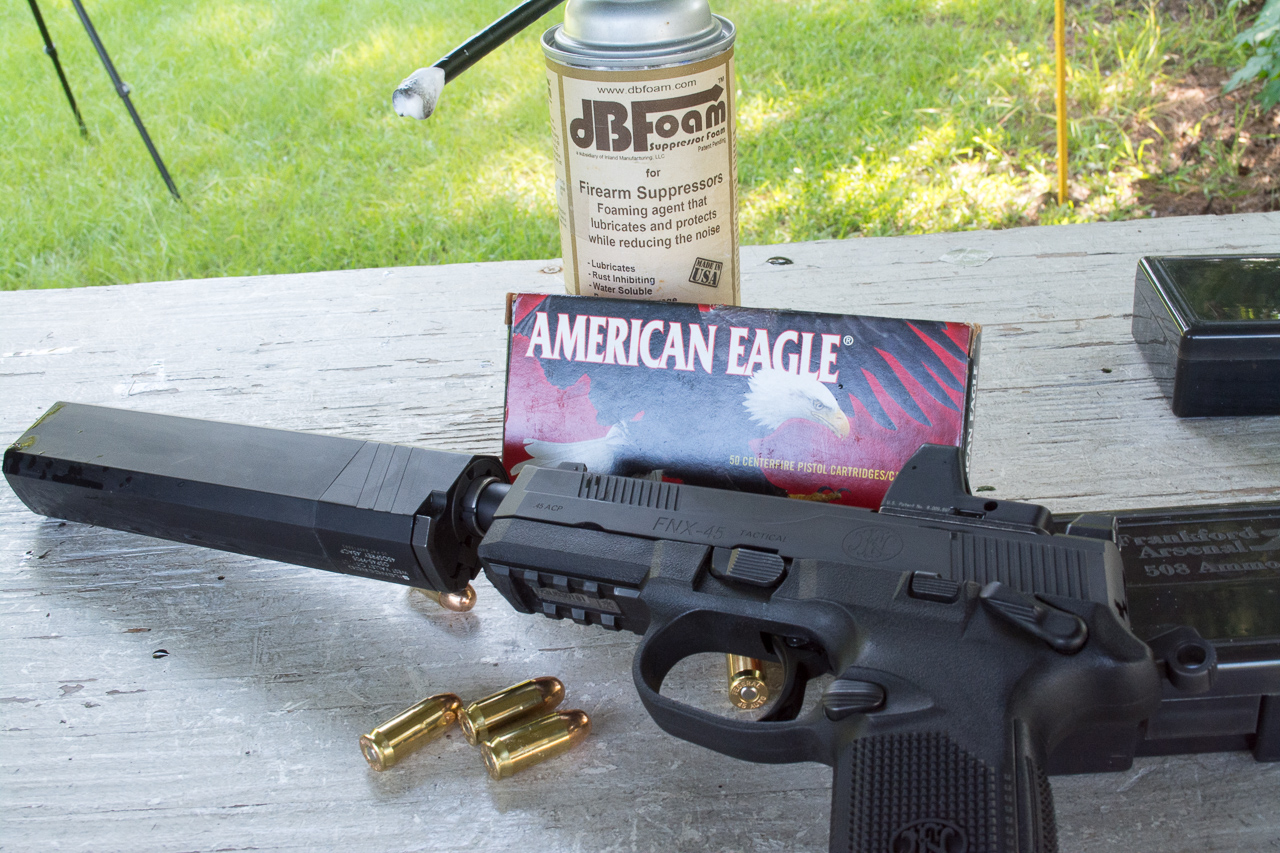 The FNX 45 Tactical comes with a threaded barrel. Given the almost always subsonic 45 ACP chambering, it’s a great suppressor platform.

The FNX 45 Tactical is not a 1911 design, however. I call it a “triple-action.” OK, so that’s not really a thing, so let me explain. It’s a double-action, hammer-fired pistol with a frame-mounted, ambidextrous safety lever. As with traditional double-action pistol, you can carry the FNX 45 Tactical with the hammer down and safety engaged. To fire, you’ll need to flip the safety lever down and execute a heavier double-action trigger press. After the initial shot, the pistol shifts gears to single-action and operates with a four-pound (give or take) trigger. If you like, you can also safely carry it with hammer down and safety off, as that makes it identical in function to something like a traditional Sig Sauer DA/SA.

The “triple-action” description comes from the unique way in which that safety works. It operates like a decocker lever. Push it all the way down and the hammer is safely lowered, putting the pistol back in double-action mode. However, if you’re a cocked and locked personality who prefers single-action, you can carry it like a 1911 with the hammer cocked and safety on. Just push down on the frame safety like a 1911 and fire in single-action mode. If you push too aggressively, the worst that can happen is that the hammer decocks and that shot is fired double-action. That may sound complicated, but it’s not. Whatever condition the hammer is in, push down on the safety, and the gun will shoot one way or the other. 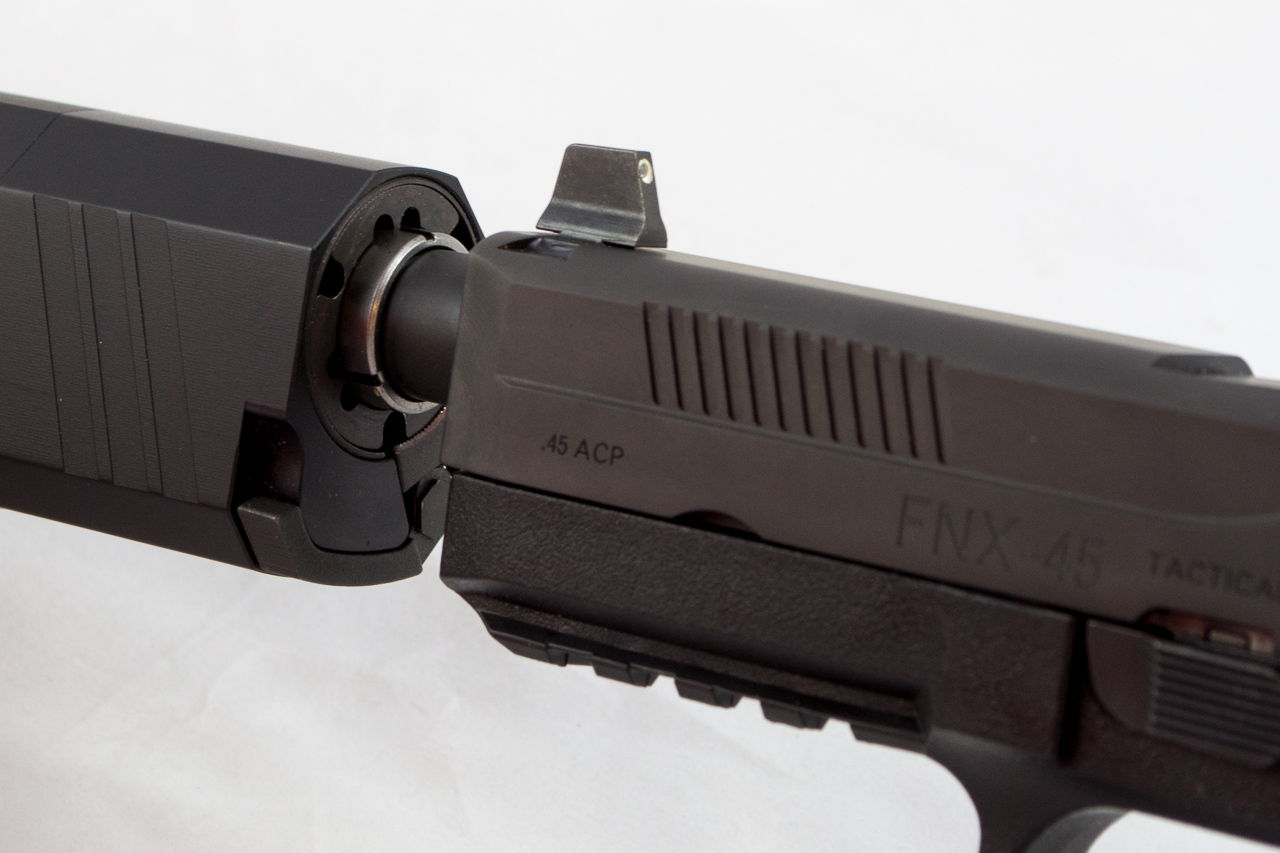 Note the suppressor-height sights. That also plays nicely with many red dot optics.

Last, but certainly not least, the FNX 45 Tactical is optics ready. The slide is cut and red dot sight ready. The four included adapter plates fit a wide variety of optics. In a nod to its “tactical” name, it also sports a threaded barrel, so it’s suppressor ready.

While the FNX 45 Tactical is probably a hair bigger than most would prefer for concealed carry, it makes a great home or car pistol. Besides, it’s pure fun to shoot.