Sometimes I find myself scratching my head when a new product is released. There are times when I’m confused because the product is just plain ridiculous. That is the case with the Grip Knife. Unless I’m grossly missing something, it’s just a product no one needs. In other situations, it’s my own ignorance that keeps me from being able to understand the meaningful nature of a new product. The Cloud Defensive REIN fits squarely in the second scenario. I simply didn’t comprehend the REIN’s niche.

I’ll also say that my initial opinion of the REIN was significantly impacted by another weapon-mounted light: the OWL. The Optimized Weapon Light is everything I could want in a WML, so I found myself wondering why the REIN should exist. Come to find out, it isn’t all about me…

The OWL is the perfect weapon-mounted light for a 12.5 in. AR-15 I built recently. The handguard has a small rail at the 12 o’clock where an OWL mounts nicely. The OWL puts out a solid 1250 Lumens with over 50,000 Candela: that makes for some serious throw. The integrated tape switch makes operation easy and at the same time it’s durable. What’s not to love? Plain and simple the OWL leaves me wanting for nothing when it comes to a light for my AR15. So the REIN puzzled me. 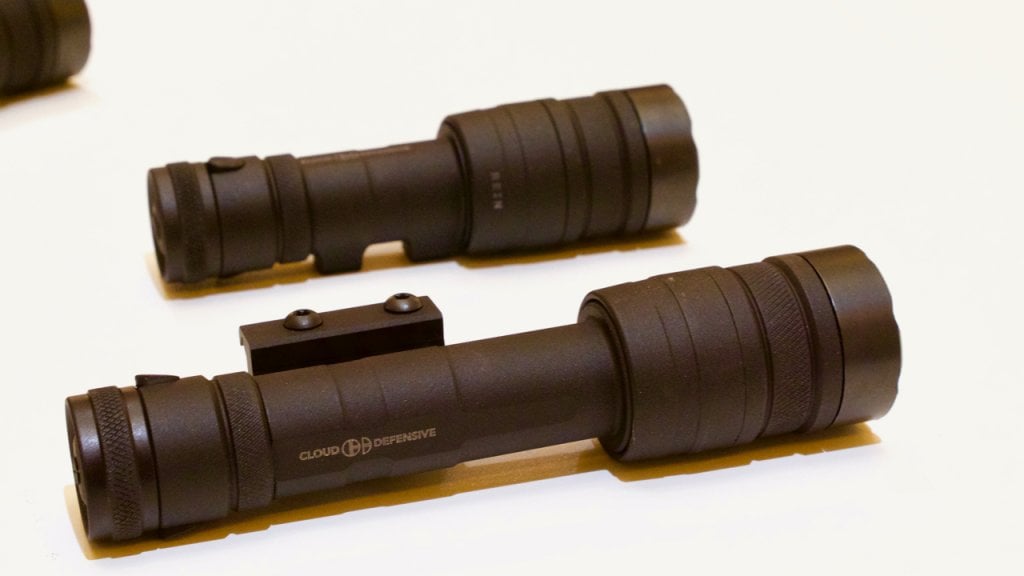 The REIN Rail-mounted Environmental IllumiNator, looks different but shares many common features with its cousin the OWL. It has a removable S7 tool steel bezel, a replaceable lens, a light temperature of 4000K, and a reflector that has some serious throw. Speaking of power – REIN is looking to be about 10% more powerful than the OWL and has clocked in at over 59,000 Candela. So it’s actually got a performance edge over the OWL though both are brutally powerful. With so much in common, I’m still wondering…

Why Build the REIN?

Apparently not everyone intends to use their AR15 the same way I do. For instance, some people opt for a longer barrel than the 12.5 in. I went with. That could require mounting the light further forward and the switch further back. Or they might run additional gear on their rifle (think lasers or night vision equipment), systems which would require a mounted light to work around. Still other folks might want to mount a light somewhere other than the top of their handguard. Or they could be looking for a bit more flexibility on other platforms — the AK comes to mind here.

While at SHOT I talked with Matthew Tenbarge of Cloud Defensive. He brings the brains and good looks to the operation. When I asked him to explain the reasons behind the REIN, he said, “The OWL works for a lot of guns. The REIN exists to work on all the guns and set-ups the OWL was not designed to cover. With the OWL and now the REIN, Cloud Defensive has successfully offered a weapon light solution for all the long guns out there.”

When coupled with a tape switch, the light can be operated from different locations on the handguard. This allows for different grips on the rifle without sacrificing the WML’s full functionality.

The REIN’s size and mounting interface allow for a host of different mounting options. Some are offered by Cloud Defensive themselves while others hail from different manufacturers. The threaded holes on the body mount to a standard WML mount pattern (same Scout, Streamlight, et). This provides options allowing the light to be configured to work with all the important gear hanging off of important people’s guns. And it allows for nearly endless customizable mounting setups, including everything from Picatinny mounts to M-LOK mounts and beyond.

The REIN also offers some features that help it to stand out from other lights on the market.

The similarities between the REIN and the OWL help this light stand out against other lights on the market, but there is more to it.

The REIN allows users to run both a tape switch and a clicky tail cap. This isn’t completely unique, but what is different is that they two are wired independently. If your tail cap should happen to go down, the tape switch can still control the light. If the tape switch goes down, the tail cap is still functional. The durability of the REIN makes these scenarios unlikely, but the added comfort of knowing you will have white light when you need it matters.

Speaking of possible switch failure, one of the most common reasons for tape switches to stop functioning is the wiring that connects the tape switch to the tail cap of the light. Cables get bent, caught and pulled in all kinds of directions stressing and eventually damaging electrical connections.

The guys at CD tackled this problem by allowing for the cable to exit the tail cap at 90 degrees off the long axis of the light. And it gets better — that cable exit is “clocked” to the mounting lugs of the light body. So the cable exits the tail cap and goes directly towards the handguard and then into the new 3rd Generation Light Control Control with integrated cable control. This means no exposed cable. And no loose cable. Ever. No more snagging wires. No more potential failure points.

Under recoil, stuff moves around. It’s physics. This whole physics thing still applies to the cells that power WML. In some lights, the recoil impulse of the rifle can cause the batteries to compress the springs that are supposed to keep them in place. The result is a light that flickers. This is hardly optimal.

The REIN addresses this issue with a simple device they call the Battery Jack. This small, patented, plastic spacer screws into the body of the light behind the cell locking the battery in place, thus ensuring there is constant contact between the battery and, well, the contacts. The result, no flicker and a system that is far superior to anything else mechanically speaking — simply because the REIN is, as of this writing and to the best of my knowledge, the only light on the market that stops the battery from bouncing around under recoil.

The feature set of the OWL impressed me and after learning more about it the REIN was equally as cool. I appreciate the fact that Cloud Defensive seems to be about solving problems with well-engineered solutions. I was thinking about picking up another OWL for my 16 in. gun, but I can see how a REIN might be a better choice.

Cloud Defensive’s REIN will start shipping in April 2020 and will be available in two cell sizes and two packages.

The basic REIN kit with a clicky tail cap and mounts will have a street price of about $270 and the Complete REIN kit with a pressure pad and a gen 3 Light Control System will cost you about $320.

All the offerings come with a battery and a charger as well.

These prices put the basic just a touch over Surefire’s offerings and the upgraded package at a serious discount compared to a Surefire and tape switch.

My “Issue” with the REIN

I had a chance to handle a REIN and REIN Micro while I was at SHOT Show in Vegas. The light was impressive as I expected to be. Of course, I won’t know for sure how well the REIN works till I get a hold of it and run it so I have to reserve my assessment until then. I expect that Cloud Defensive will deliver. However, I already have one issue with the REIN.

It’s the N. I originally found myself wondering what it meant, but then my brain did what brains do and it filled in the gap. Here is my theory:

Rail-mounted Environmental Illuminator… N… is just to cover up the real reason for the name. I’ve decided that Rein is simply the name of a local gal that is working her way through med school.

I got a chance to talk with the Cloud Defense folks about future products and their plans confirmed my theory. In late 2020 I expect Cloud Defense to release two new products. First, a set of illuminated reading glasses with optical quality lenses named Kristall. Next up is a helmet-mounted admin light with a red lens dubbed Sinamin.

Rein. Kristall. Sinamin…I can’t be the only one seeing a pattern there.

Of course, this is all just a theory. It should be noted that Matthew didn’t refute my claims…

I guess you will need to decide what that N stands for and if the REIN is right for you.

Just understand, if you buy directly from Cloud Defensive and you need change, you’re gonna get singles.