A white dot dances across the screen, transforming into the rifling of a dark, black pistol barrel. It settles on a man in a black suit walking from screen right. He stops, pivots, crouches slightly, and fires a small pistol toward the camera. Blood pours down the screen and the most famous spy movie theme song starts. It’s a tune indelibly interconnected with the Walther PPK.

Would you carry a 90 year old pistol?

Mouse guns: How small is too small to carry?

Walther PPK – now made in the USA

Scroll down below the mag options for more PPK history.

The Warehouse has a wide selection of magazines for your favorite little pocket pistol, including:

The man with the gun in the movie intro is, of course, James Bond. British super spy creation of Ian Fleming. The gun itself?  If it’s an older James Bond movie, odds are it’s the world-famous Walther PPK. In fact, it’s the Albert Broccoli-produced film franchise that has arguably contributed the most to the PPK’s popularity.

What most folks don’t know is that Bond did not start out carrying a Walther in the books. He carried a Beretta 418, a small gun chambered for .25 caliber bullets, the same sidearm Fleming himself had been issued during his time as a World War II British intelligence officer. When renowned British firearms expert George Boothroyd wrote to Fleming suggesting Bond deserved a more powerful gun, Fleming took his advice and swapped out the Beretta for the Walther PPK in .380 ACP. The soon-to-be iconic pistol then made its literary debut in Fleming’s second novel, Dr. No, as Bond’s replacement sidearm at the insistence of M.

This makes Casino Royale the only book where Bond carried a Beretta. (Tuck that fun fact away for your next dinner party.) 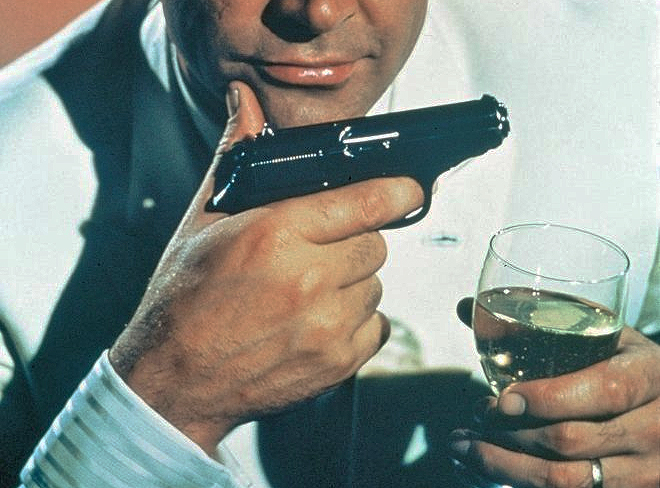 The Walther PPK itself has a much richer history than its time spent on the silver screen, however. Over the years it has seen an assortment of variations, styles, and calibers. And for a while, it even sat dormant. How can a classic gun be treated so poorly? Read on…

The original Walther PP (Polizeipistole or “police pistol”) was a series of small handguns created by Walther in 1929 for the German police and military.

The wildly successful PP inspired many lookalike pistols from other European manufacturers, including the:

There were others, too. In fact, many contemporaries of the PP series owe their origins to the humble little pistol.

Of course, as the world changed, so did guns and the rules that governed them. Changing times in Europe saw stricter gun control laws, and rampant inconsistency in US gun regulations wreaked havoc with those trying to buy PPs in America.

Pocket Pistol (and other) Restrictions

The Gun Control Act of 1968 altered the rules about how guns could be made in the US and created the Federal Firearms License (FFL) system. Like other European gunmakers, Walther had to navigate these new rules if it hoped to keep selling guns in the US. One of the new rules stated that guns had to be at least a certain size. Alas, the PP was a quarter-inch too small both in slide/barrel length and grip length and was two ounces too light.

Yes, that was really part of the regulation. The gun had to be heavier. Since Walther wanted to keep exporting to customers in the US, rather than altering the existing design, they created the new PPK/S version of the pistol to fit the new guidelines, including adding two more ounces.

PPK in other calibers

Of the many PP variants, the most popular by far has been the PPK, which sports a short grip and barrel for improved concealability. Over the years, the PPK has been offered in a variety of calibers, including .22, .32, .380, and 9mm, as well as a few slight variations on the overall platform.

Here are three of the most significant variations:

Parts may be hard to find for the older models, but magazines in three calibers are plentiful for the PPK.

Not all of the PPK’s history has been good or glamorous. It had some infamous moments, too. For example, as the Russians encircled Berlin in May 1945, Adolf Hitler and his girlfriend Eva Braun committed suicide in a bunker below ground: with bullets from a .32 caliber PPK.

Many people today are unaware that South Korea was once an autocracy, and not too long ago either. The Walther PPK played a role there too, when then-dictator Park Chung-hee was the target of an assassination. Chung-hee, who had survived an earlier assassination attempt in 1974, was gunned down in 1979 by the pro-democracy director of Korea’s CIA analog, Kim Jae-gyu.

With the rapidly growing popularity of polymer-frame pistols, the all-steel PPK’s days were seemingly numbered. Thanks to higher-tech, lightweight materials, guns were getting lighter and easier to carry. This rendered “heavy” metal guns obsolete, at least in the minds of many shooters.

Too, all-metal guns were being replaced in police departments the world over with full-frame polymer sidearms. As a result, metal gun sales slumped, and in 1992 PPK production stopped.  Aside from the venerable 1911 and in some cases the Browning Hi-Power, most other metal guns no longer held the interest of gun owners.

However, thanks to a resurgence of collector guns and new efforts by Fort Smith, AR-based Walther USA, the PPK was reintroduced as an experiment in 2018 with a .380 ACP version. The new version of the old design caught on quickly and sales have steadily grown over the last two years.

“The timeless design and superior engineering make the PPK a true legend amongst firearms.”