The Walther PPK/S was basically the world’s first Glock 19X. It was the first gun to combine a compact slide with a larger frame. This wasn’t to win a contest with the Army though. It was to skirt gun control laws: the PPK/S was born from the Gun Control Act of 1968.

This new gun control law was designed to keep cheaply made foreign-made guns off American shores by instituting a sporting purpose clause and a point system. The original PKK was popular in the States, but this law banned its import due to a single missing point. So, Walther combined the original PP frame with the compact PPK slide. This created a heavier, taller gun that gained that one point for legal import.

The Smith and Wesson Angle

Eventually, the Walther PPK was simply produced domestically but that didn’t spell the end of the Walther PPK/S. The PPK/S grew its own little fan club and bigger guys like me became appreciative of the longer grip. Walther recently started making the PPK and the PPK/S in the United States, but my model is a bit older than that and was produced by Smith and Wesson.

The Walther PP family has some very interesting production histories in the United States. This includes production and import, it’s passed through a few companies and overtime changes have been made. Mine features a slightly extended beavertail that Smith and Wesson came up with. Other companies produced the gun to varying quality levels, and some are still imported like the Bersa models.

S&W reportedly made a very nice Walther PPK/S and after owning mine for several years I have to agree.

Breaking Down the Walther PPK/S

The Walther PPK/S is an all-steel gun that is a real heft to carry. The 380 ACP model weighs 22.4 ounces. To put this in perspective the Glock 19 weighs only 20.99 ounces. It’s a hefty gun that certainly shows it’s age.

The slide locks to the rear after firing the last round but there is no manual way to drop the slide. You have to remove the empty magazine and manually slingshot the slide forward. The grip is thick and wide, especially for a 380 ACP. The PPK/S is a massive gun, at least when you compare it to more modern 380 handguns. It’s also a very comfortable gun when it comes to filling the hand. The Walther PPK/S fills the hand just perfectly.

This is a DA/SA gun with an external hammer and it holds a total of 7 rounds in the magazine. The PPK/S sports a slide-mounted safety that doubles as a decocker. Additionally, the magazine release is placed oddly high on the grip and isn’t as easy to accentuate.

The sights are simple and fixed. They are complete and actual sights, but they are small. The front sight lacks any kind of marking or high visibility indicator. They aren’t easy to pick up, but they do the job. I doubt many people are going beyond point shooting with a Walther PPK/S in self-defense.

Range Time with the PPK/S

The Walther PPK/S is a blowback-operated handgun that utilizes a fixed barrel. The upside is the weapon is inherently reliable. It’s simple and the gun fires and ejects just about any type of 380 ACP I’ve put through it. The simplicity of the blowback system certainly has it’s advantageous.

From being in the gun world for some time it was common knowledge that the Walther PPK and PPK/S were ammo picky. This was likely due to the fact the 380 was never a popular cartridge in the United States and loadings between companies were inconsistent. The 380 ACP, of course, made a big comeback and that’s not a problem these days.

Additionally, the blowback action allows the gun to have a fixed barrel which allows it to be a bit more accurate than a common tilting action. The Walther PPK/S is quite accurate, which is a result of a combination of features. The single-action trigger, the presence of sights, and the hand-filling grip make this a very accurate little 380 ACP.

The single-action is much smoother and lighter but has a good dose of overtravel to it. It also sports a very light reset. You can hardly feel it, and you certainly can’t hear it.

The ergonomics are hit and miss. The grip and grip angle are comfortable, and the beavertail is a welcome addition. The gun fits my big hands well and allows for a stable firing grip. The safety is easy to reach, which is a surprise for a slide-mounted safety. The magazine release is only accessible for me with a complete shift of the hand. 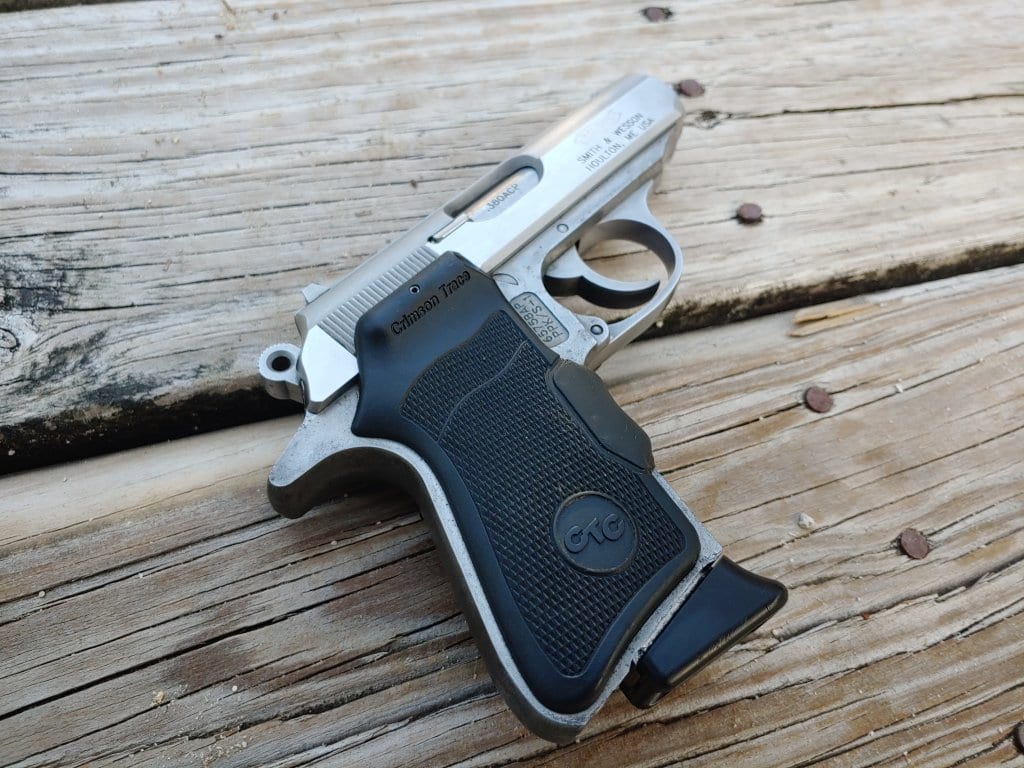 This makes reloads far from rapid, but I guess when the weapon was designed the art of pistol gunfighting was far from modern. It’s a product of its time, and that’s very evident.

The Downsides of a Blowback System

The big downside to this gun’s design is the brutal recoil. Most blowback weapons feature a large and heavy slide like Hi-Point or a large and heavy bolt like the CZ Scorpion. The Walther uses a small and light slide, so all that force is smashing into your hand and it beats the hell out of you. The stiff spring helps, but there is a noticeable difference between the Walther PPK/S and something like a Glock 42 or even the 9mm Glock 43.

The stiff spring is another downside. If you have hand strength issues you are going to find the gun difficult to chamber a round with. The slide is stiff and the stiff spring that wraps around the barrel is a necessity for a blowback gun.

The Walther PPK’s historic use by James Bond will always add a level of cool to the Walther series of handguns. From what I have seen the PPK/S was only used by Bond once in Skyfall, but it still has that Walther cool factor attached to it. A somewhat heavy, cumbersome 380 ACP pistol that is several decades old is still popular for a reason.

The PPK/S still retains the classic lines and good looks of the Walther handguns. Walthers have become the quintessential spy gun. The PPK/S is small, shiny, and just cool. The Walther PPK/S is an enjoyable and fun gun that could still fill a role as a concealed carry handgun. Admittedly it’s often outclassed in many ways by newer 380s, but at the same time, I don’t think we’ll ever see a cooler 380 ACP handgun. 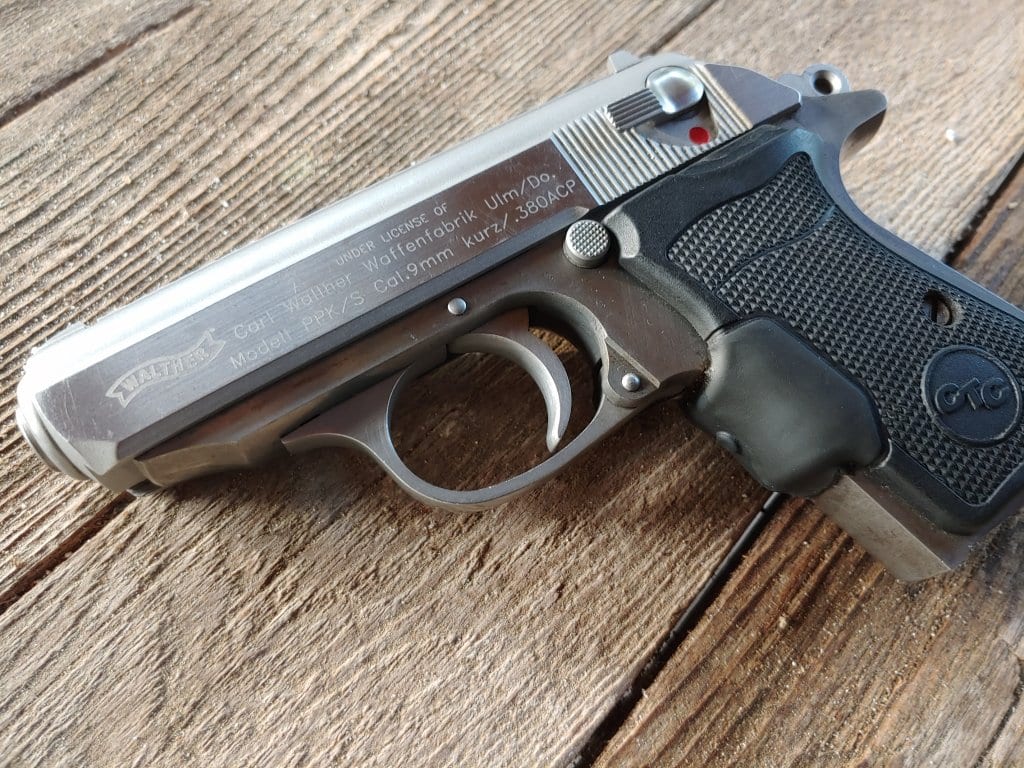 The Walther PPK/S is a special gun, one born of necessity to comply with a ridiculous law, yet it’s one that stuck around long after domestic production of the PPK began. The PPK/S is still in production, now it’s being done by Walther in Fort Smith Arkansas and comes in both blued and stainless.

The Walther PPK/S is a classic, and I imagine it will continue to stick around and remain a popular choice for those who enjoy its looks and style as well as its accuracy and reliability.