Adapting classic cartridges to modern platforms is something that will always interest me. One of the latest projects along those lines is from Phoenix Weaponry. The company figured out how to put the venerable .45-70 Government cartridge into the AR-10 platform. The gun is called Christine. Not only does it work, but according to the company, it shoots sub-MOA.

To solve the rimmed base problem, Phoenix Weaponry decided to remove the rim and create its own cartridge: the .45-70 Auto. This cartridge can be loaded to identical specifications as the .45-70 Government recipes for the Ruger No. 1 rifle. The only difference is that instead of a normal rim, the cartridge has a rebated rim that works with a standard .308 Win bolt head.

Since the No. 1 rifle is built tough, handloaders can maximize performance out of the .45-70 Government cartridge without worrying about the gun coming apart. Normal .45-70 Government loading dies are used with a .308 Win shellholder.

A significant concern that many shooters may have relates to finding or making brass to load. To get you going immediately, the company includes 50 pieces of brass with the gun. The company will also sell virgin brass through its website. Additionally, the company can sell you a form cutter if you have a lathe and wish to make your own .45-70 Auto cases from .45-70 Government cases.

As is typical to the AR platform, this is a direct gas impingement rifle. It has a rifle length tube that bleeds gas through a lightweight, low-profile adjustable gas block of the company’s own design. The gas operates a standard .308 Win bolt carrier group. 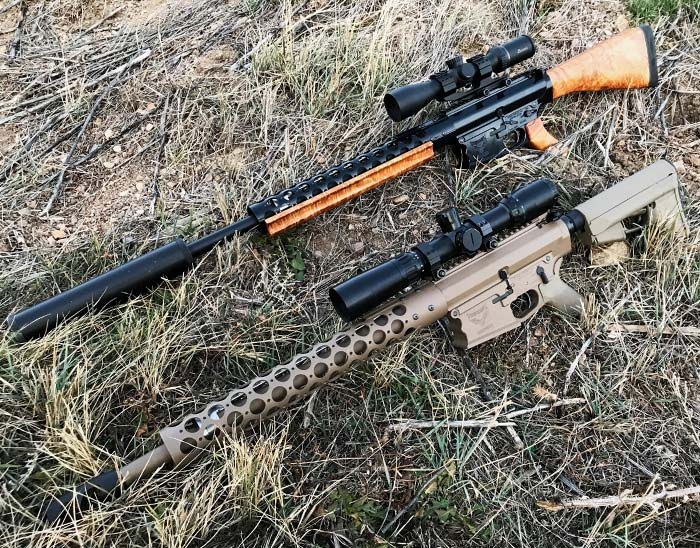 Phoenix Weaponry builds Christine with an 18” 4140 steel barrel. The barrel has a 1:14” twist. It is threaded and fitted with a Chevron muzzle brake designed by the company. The brake is made of 4130 steel.

Both the upper and lowers are machined 7075-T7 aluminum. The rifle uses a Magpul ACS stock and MOE pistol grip. Phoenix Weaponry uses modified 10-round Magpul magazines to feed the .45-70 Auto rounds. These magazines will hold six rounds of the new ammunition.

The handguard is CNC machined 6061-T6 aluminum with the ability to add Picatinny rail sections. It is free floated.

The gun is not cheap, but then the R&D alone in developing a new cartridge to run in a system it was never designed for is neither easy nor inexpensive. The base price is $4,800.