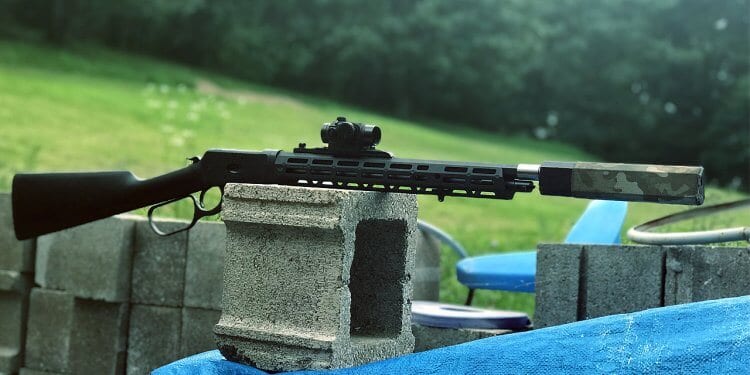 The lever gun was the AR-15 back in the day. Everyone had one to defend their home and land. We see people today still use them as hunting rifles or, in the case of Cowboy Action Shooting matches, they are used in competition. However the lever action rifle design has remained stagnant.  There has not been a way to accessorize one that works well until recently. Lately some people have been making tactical lever action rifles with the onset of Midwest Industries MLOK handguard.

Mossberg released their Tactical 464 SPX six years ago. They took their 464 lever action and added a railed handguard as well as an AR-15 style carbine stock for adjustable length of pull and threaded the barrel.

The 464 SPX has undergone a slight change with the handguard. It no longer comes with the cheese grater tri-rail. As you can see from the stock image below, the handguard rails have been greatly reduced to just a few slots near the front end of the handguard.

While this ticks all the boxes as a “tactical lever action rifle” it was not widely adopted. I did not see Marlin or Henry Repeating Arms running to make a similar gun.

Midwest Industries To The Rescue

Midwest Industries designed an M-Lok handguard for the Marlin 1895. When used on the Marlin 336, you get something better looking and more functional than the Mossberg 464 SP. Although you do lose the length of pull adjustability. But do you see something that the Marlin does that the Mossberg can’t? The top picatinny rail for optics. That was the biggest problem with the Mossberg. Sure you could get the right set of rings and a scope but the Marlin 336 allows you to attach any optic of your choosing. Red dots seem to work the best on a lever action rifle. 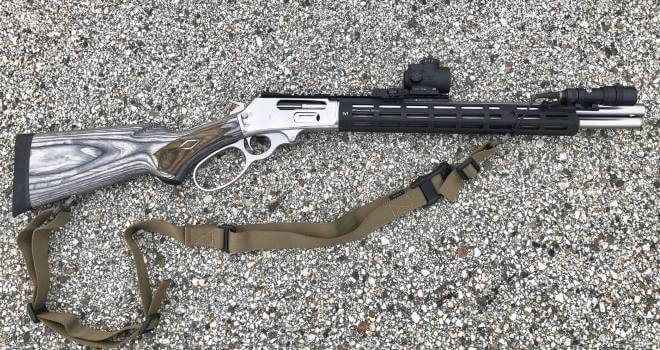 The success of the Marlin MLOK handguard led Midwest to make a similar handguard for the Henry Repeating Arms lever guns however it is significantly more complex to install. While the Marlin handguard takes at most 10 minutes with simple tools, the Henry handguard almost requires a competent gunsmith. Below is a concept gun by Henry called the X1. 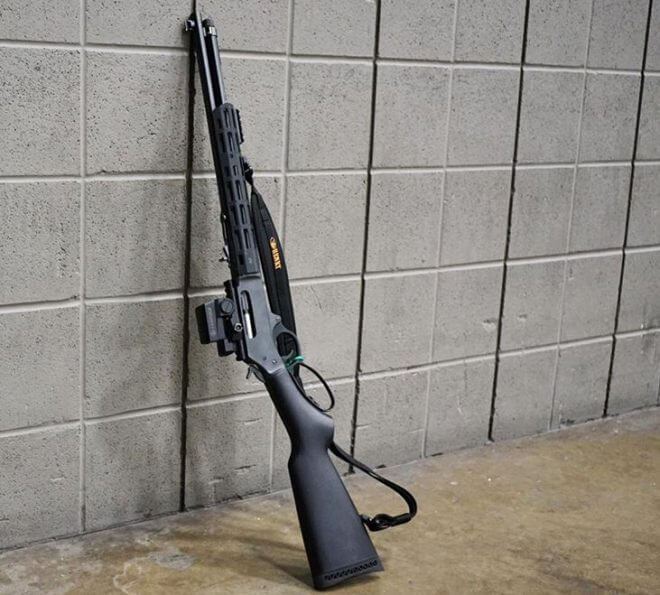 I Made My Own

Some people have gone the extra mile and modified their guns, or in this case handguards as well, to get a certain look and feel out of their rifle. Phil Rock aka @bufallodiller SBR’d his Marlin 1894 and threaded the barrel so he could suppress it with a SilencerCo Osprey45.  The handguard was modified. He had to cut an inch off near the back of the handguard and reweld it back up. You can’t even tell anything happened. 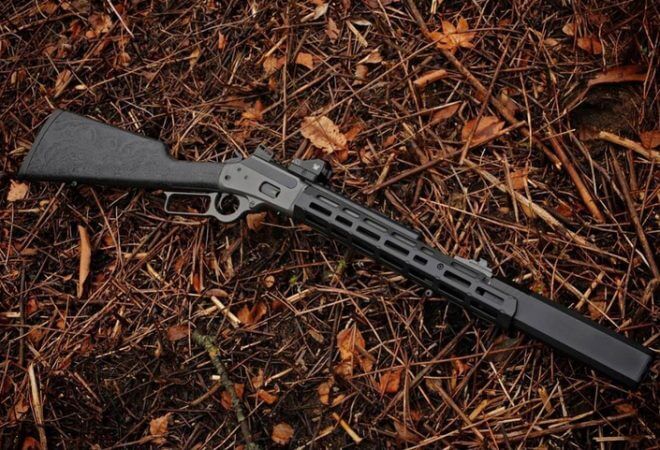 Inspired by this build I tried to make one myself. Taylor’s Firearms offered up their 1892 Alaskan. This is a take down lever action rifle with short optic rail. 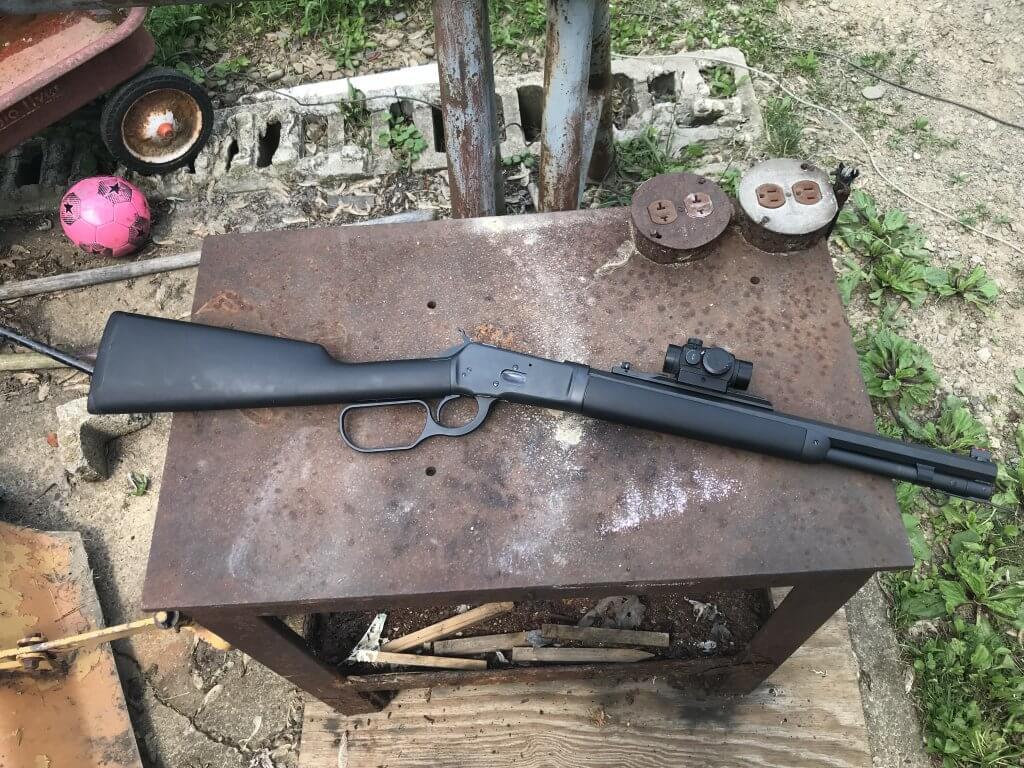 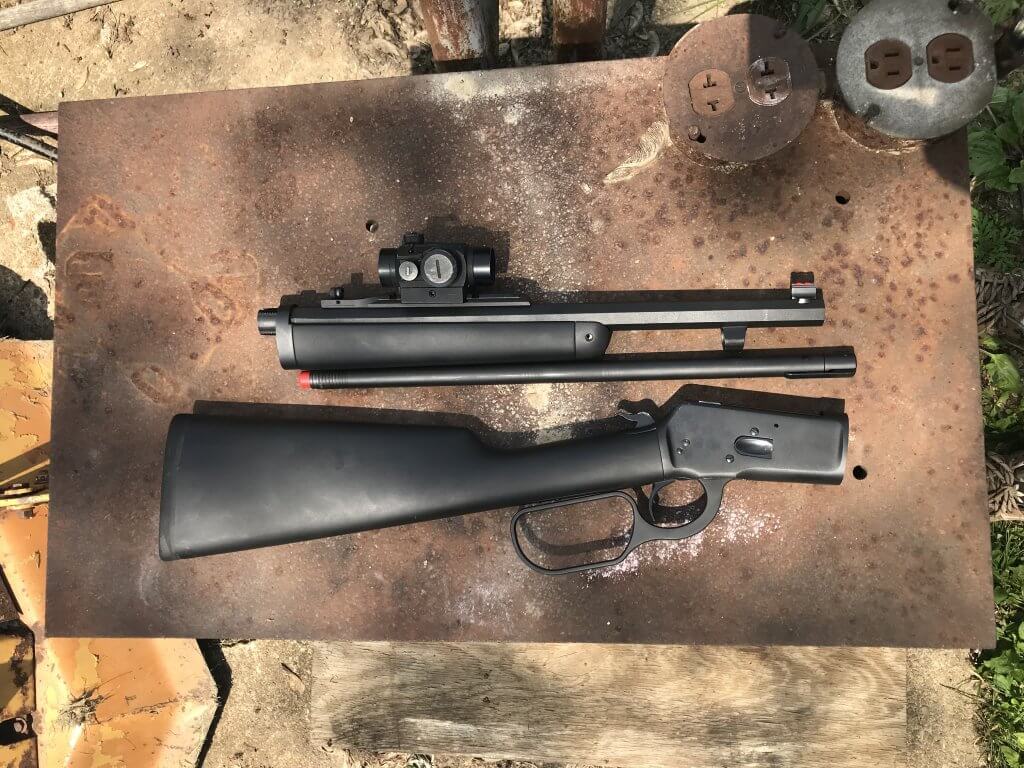 This 1892 Alaskan is chambered in .44 Rem Magnum so I could suppress it with my Osprey 45. The barrel is only 16″ but that length is needed for suppressing .44mag. If the barrel was shorter, the pressure of the cartridge would be too much for the Osprey45.

The 1892 Alaskan is not like the Marlin 1894. It has similarities but attaching the handguard required gunsmithing. I acquired the help of my friend Keith and his machine shop.  The first challenge was attaching the handguard since the attachment points do not line up the same as they do on a Marlin. This was a simple matter of just drilling two new holes that line up with the factory mounting point on the 1892 barrel.

Then we tackled the rear of the handguard and how it interfaces with the 1892 barrel end cap. The endcap had three set screws installed on the inside. I am not sure what they are for but they dont go all the way through so they only interact with the rear of the factory handguard. Maybe there are there to take up any slack in the handguard? Well we removed them and inserted longer set screws. Keith then milled corresponding pockets in the Midwest Industries handguard. So now the handguard plugs into those three elongated set screws. 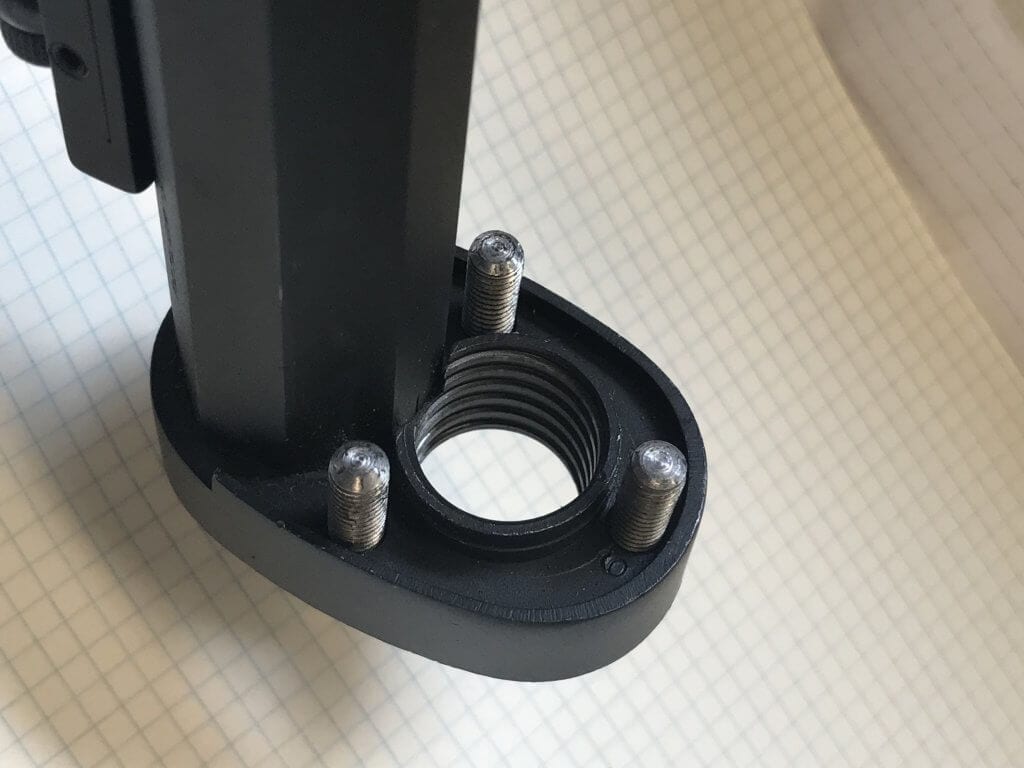 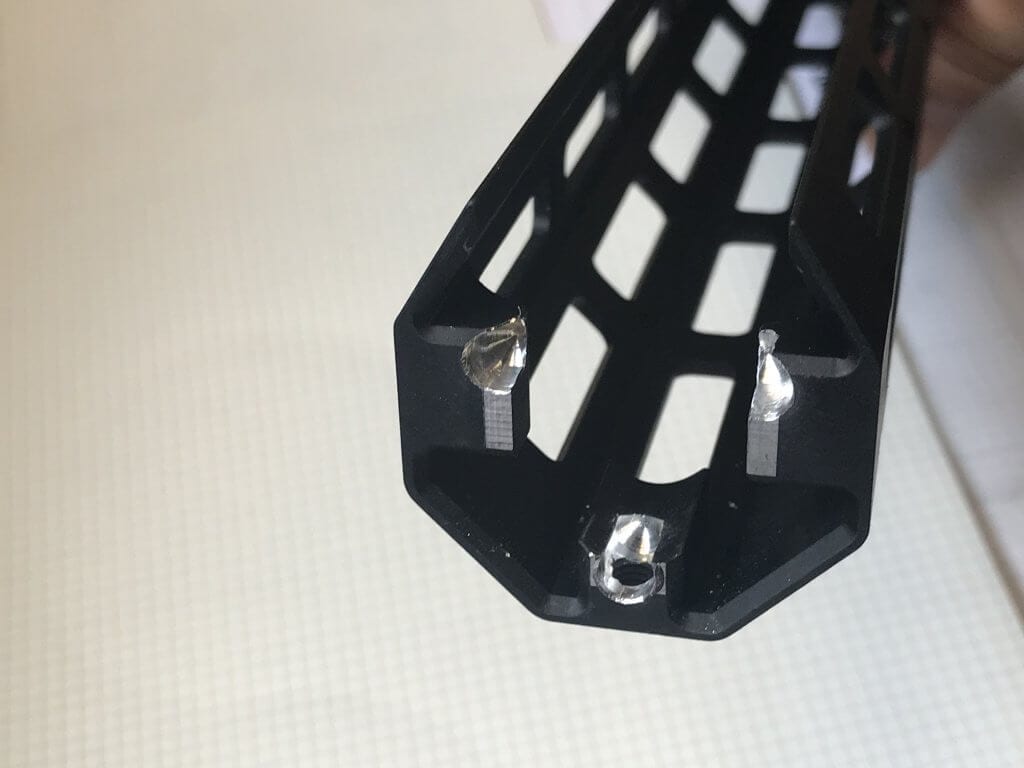 Below you can see the factory mounting hole just above the sling mount on the side of the handuard. As you move a little bit rearward along the handguard, you can see the new screw position that bolts to the barrel attachment point. 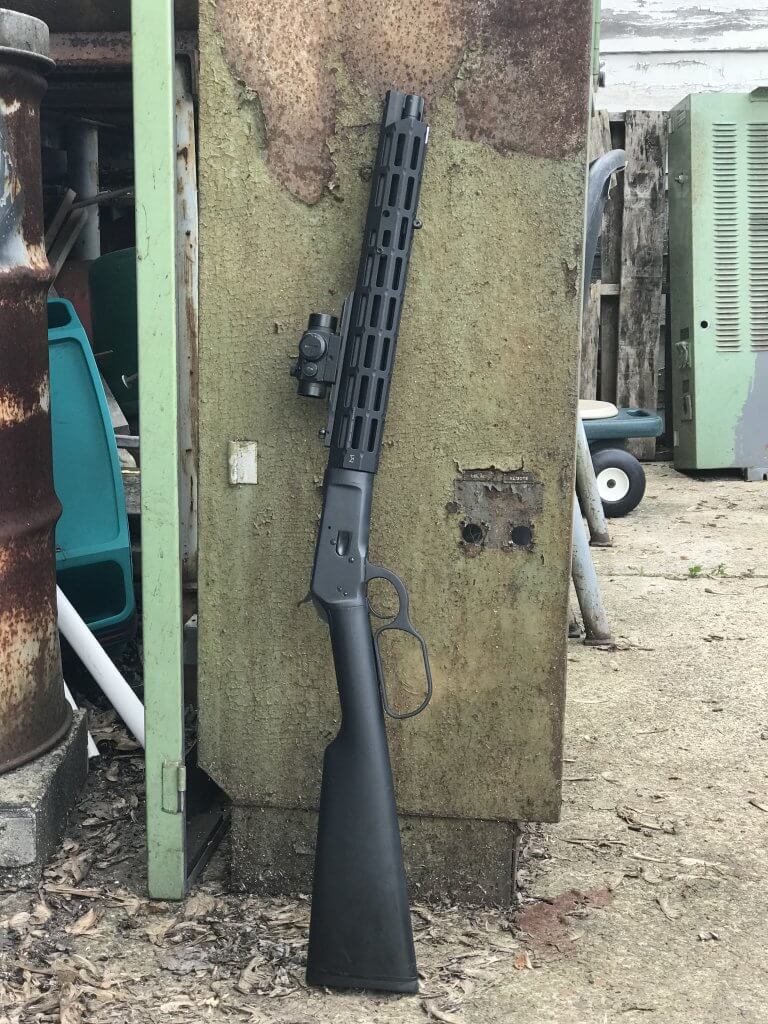 I had Keith cut open the first MLOK slot on the bottom of the handguard near the muzzle so I can lift the locking lever of the magazine tube and remove it to take down the rifle.

Next up was to the thread the barrel. This is a little more difficult. I couldn’t simply thread the barrel since the muzzle in flush with the magazine tube. The locking lever of the magazine tube actually indexes with an indentation on the bottom of the barrel. The other issue is that I will have to sacrifice the front sight. Since I will be exclusively shooting this with a red dot, I was fine with losing my front sight. 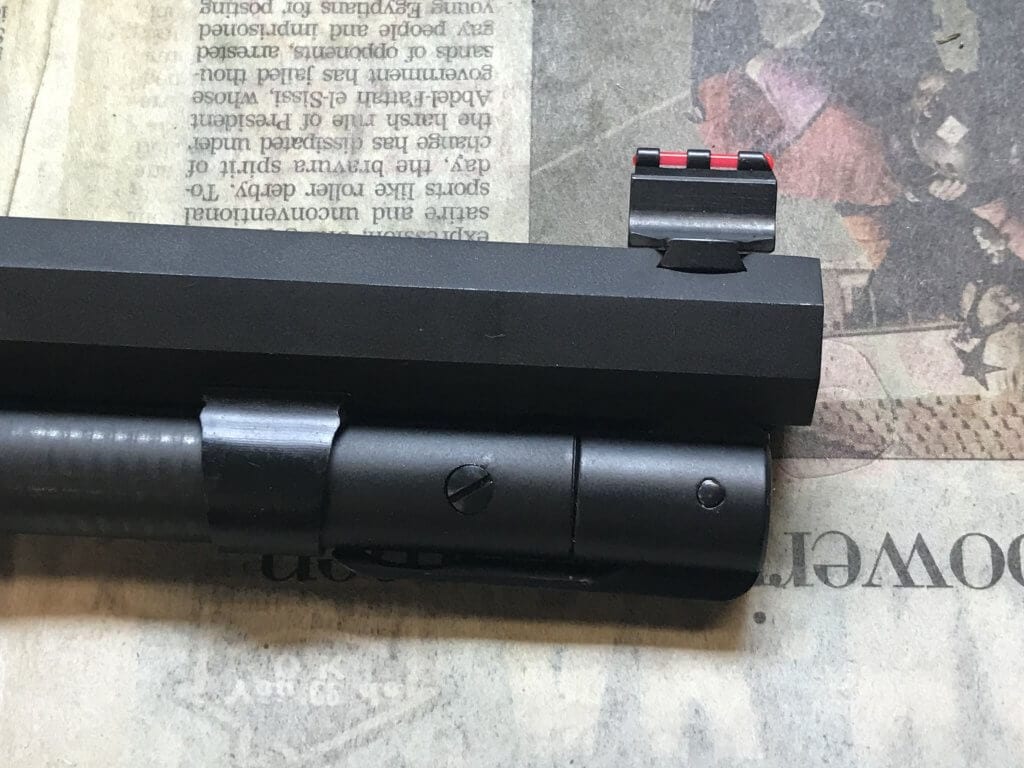 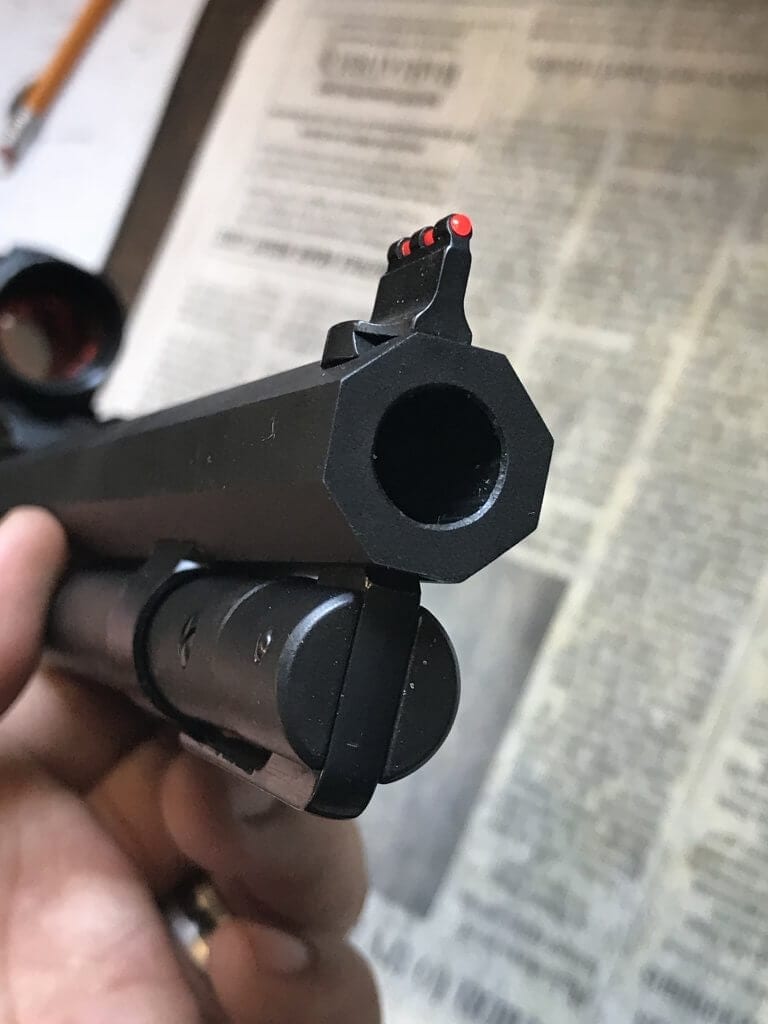 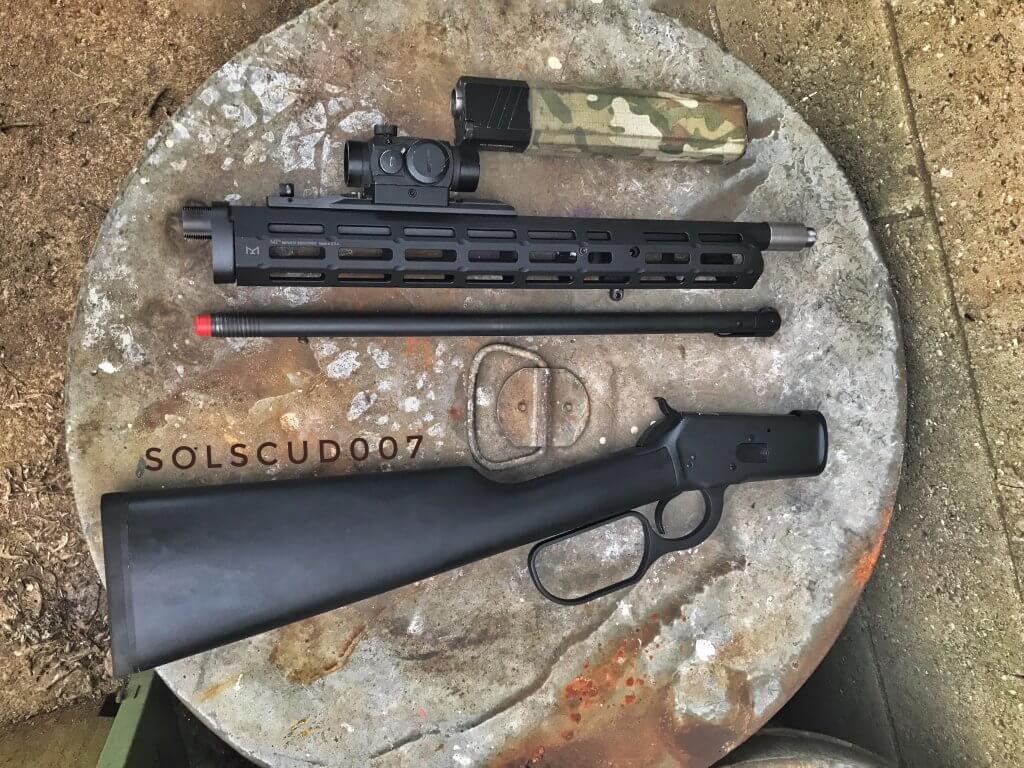 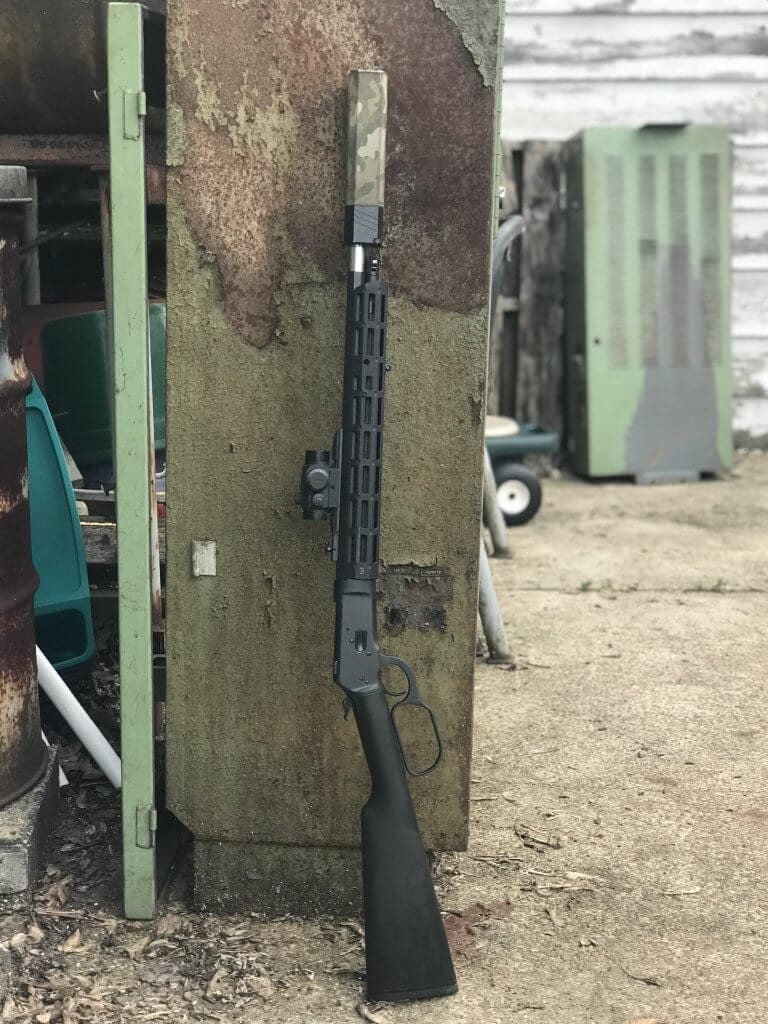 With the suppressor the 1892 Alaskan is pleasant to shoot. Besides the fact that it is now hearing safe to shoot with out ear plugs or ear muffs, the Osprey45 actually helps to reduce recoil. I have never really noticed recoil reduction before on pistol caliber rifles or even while suppressing a 12ga shotgun or rifle in either 5.56 or .308. However I tried this setup with and without the suppressor and there was a remarkable reduction thanks to the suppressor.

I am very pleased with how this setup ended up. Not only do I have cooler looking rifle, it feels more ergonomic to hold the handguard further out toward the muzzle. I can add lights and lasers or even a bipod now. And of course shooting suppressed is significantly more pleasant than unsuppressed. The only things I would change would be the make the magazine tube threads be interrupted so I don’t have to unscrew the whole thing to take down the rifle. I would also like a Magpul SGA style stock rather than the old timey stock it has now. Also I would like it if the loading port was on the left hand side of the receiver rather than on the right. That way I don’t have to remove my shooting hand from the grip just to load the rifle. However a lot of those modifications are a lot more complicated and not something Keith or I could manage to do.