Springfield just added a new pistol to its XD-M Elite series — the XD-M Elite 3.8″ Compact OSP. Designed for concealed carry, it’s got an impressive capacity. The compact grip frame holds a double-stack magazine for 14+1 rounds at the ready, but if the user wants even more capacity, the removable magwell makes it possible to increase it to 19+1. And, it’s an Optical Sight Pistol, with sights on the slide and optics mount under the removable cover plate. This Springfield XDM is available in the basic package or with a HEX Dragonfly reflex red dot.

Here’s a look, from various angles:

Let’s take a look at the key features.

At the heart of the pistol is the Match Enhanced Trigger Assembly (META) system, a superbly refined trigger designed to wring out the most from the pistol’s most important interface with the shooter.

As an Optical Sight Pistol (OSP), the new XD-M Elite 3.8″ Compact OSP features a removable seamless cover plate that reveals a mounting location for the optic of your choice, such as the new HEX Dragonfly or HEX Wasp.

In addition to being offered as a standalone pistol with an MSRP of $633, the XD-M Elite 3.8″ Compact OSP is also being packaged with the HEX Dragonfly for an MSRP of $818. 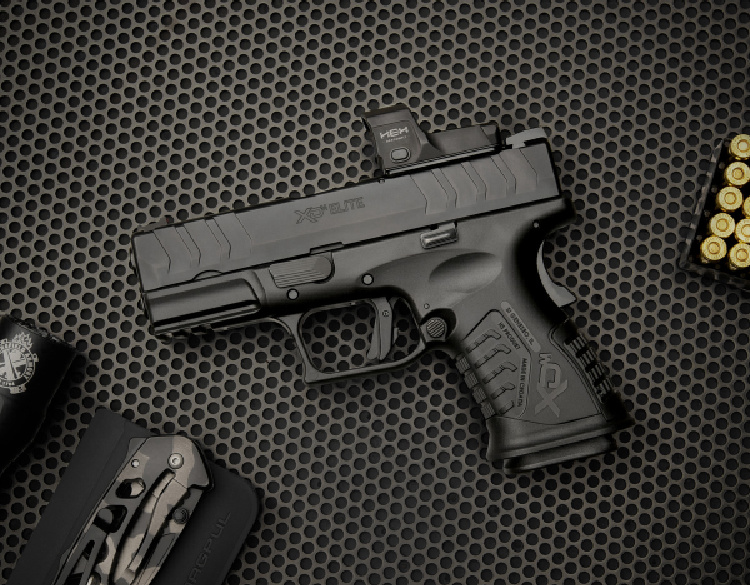 Stephanie Kimmell
Stephanie Kimmell is the firstborn daughter of Missouri's Pecan King, worthy scion of a Vietnam veteran sailor turned mad engineer-orchardist-inventor-genius. With a BA in technical writing, she freelances as a writer and editor. A Zymurgist greatly interested in the decoction of fermented barley and hops, she is in many ways a modern amalgam of Esther Hobart Morris, Rebecca Boone, and Nellie Bly. She hunts, fishes, butchers, and cooks most anything. When not editing or writing, she makes soaps and salves, spins wool, and occasionally makes cheese from cows she milked herself. Kimmell is a driven epistemophilic who loves live music and all sorts of beer.