Record What Your Optic Sees With Phone Skope 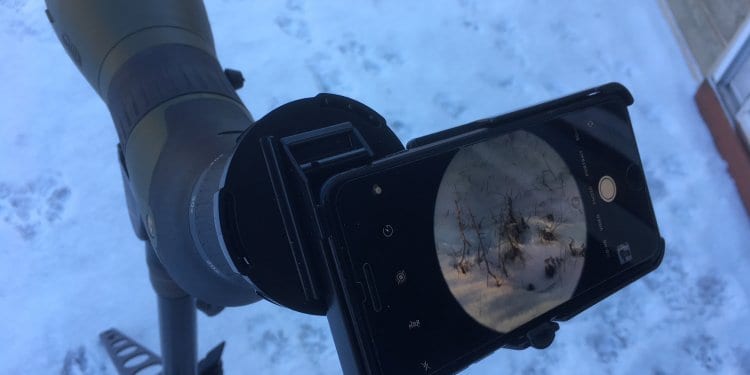 Have you ever wanted to take a picture of what your binoculars or spotting scope sees with your cell phone? Have you tried to put your cell phone up to you optic and take a picture? It can be done but it is a bit of pain in the rear. With the small eyebox of most binoculars and spotting scopes, you have a very small window to align your smartphone camera lens. Well there are things called digiscoping adapters and there are some for your phone.

Record What You See

I have used digiscoping adapters in the past. Meopta used to make a line of phone cases and adapters called Meopix. Here is an iPhone 5 Meopix on my old iPhone SE. The original Meopix adapters had fixed cups attached to the phone cases. This becomes annoying as you need multiple cases for optics with different sized eye pieces.  Meopta then revised their design and made the cups modular.

Here is the Meopix on my Meopta 80HD spotting scope. 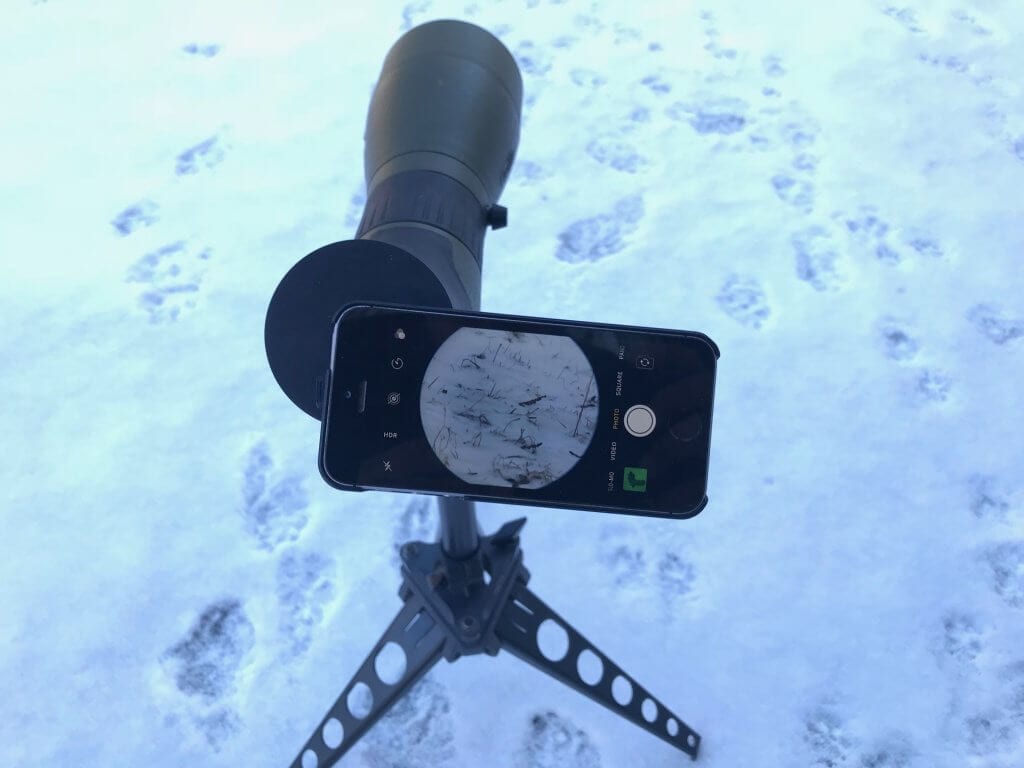 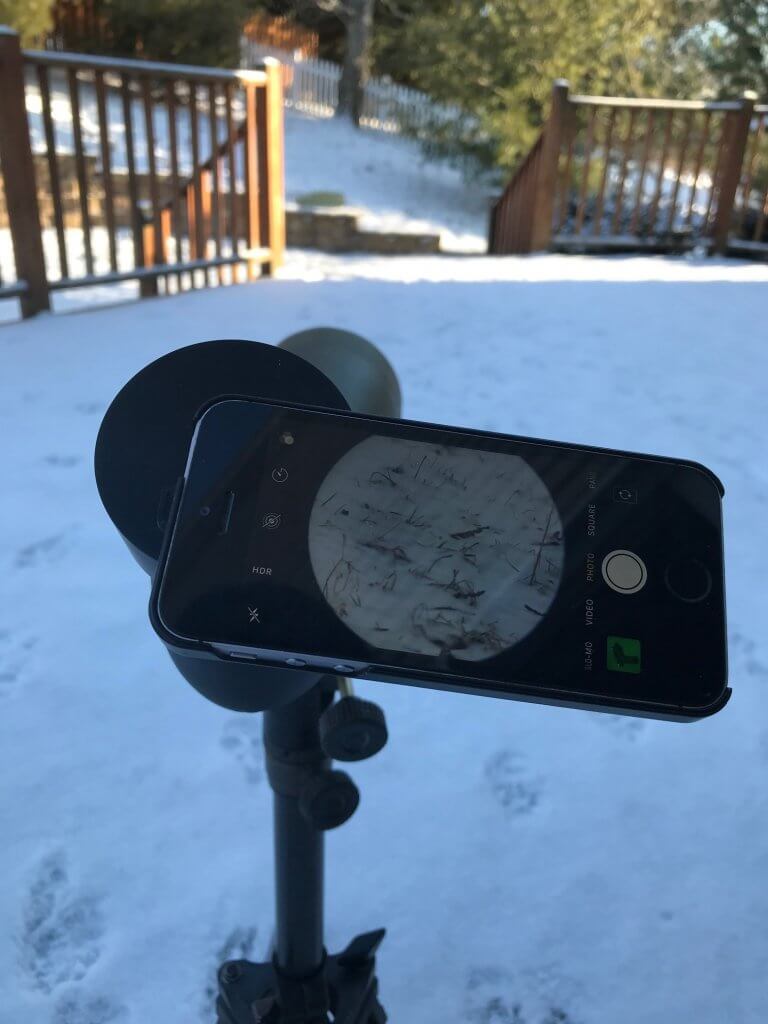 Digiscoping your spotting scope is not just for the sake of recording video or capturing images with the camera. Sure that is a pretty great reason but there are other benefits as well. I have used this setup at long range matches and it makes spotting hits MUCH easier not having to look into the eye piece. With the phone screen, multiple people can view the same image and it is a lot more comfortable. It also helps to record video at the same time so you can show shooters exactly where they missed their target. Need to call hits on steel? Not sure if what you saw was a hit? Well if you are recording video you can easily playback the footage. Then just delete it after the match or shooting session.

The one problem with the Meopta Meopix digiscoping adapters is that they are specific to the phone. Meopta stopped making their Meopix adapters and so I am stuck using my old iPhone SE. Or am I?

Just before SHOT Show, Phone Skope reached out to all media who were invited to Range Day. Fill out their form and we each get our very own Phone Skope with an adapter for our optic waiting for us. 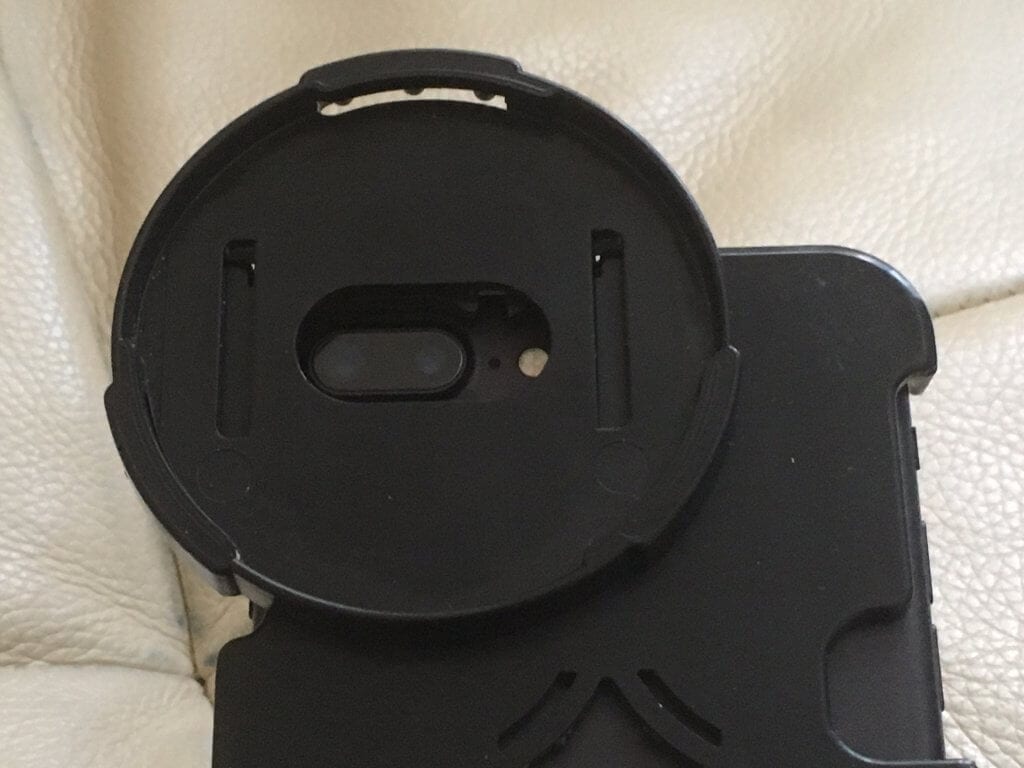 You can slide the female adapter over either lens. 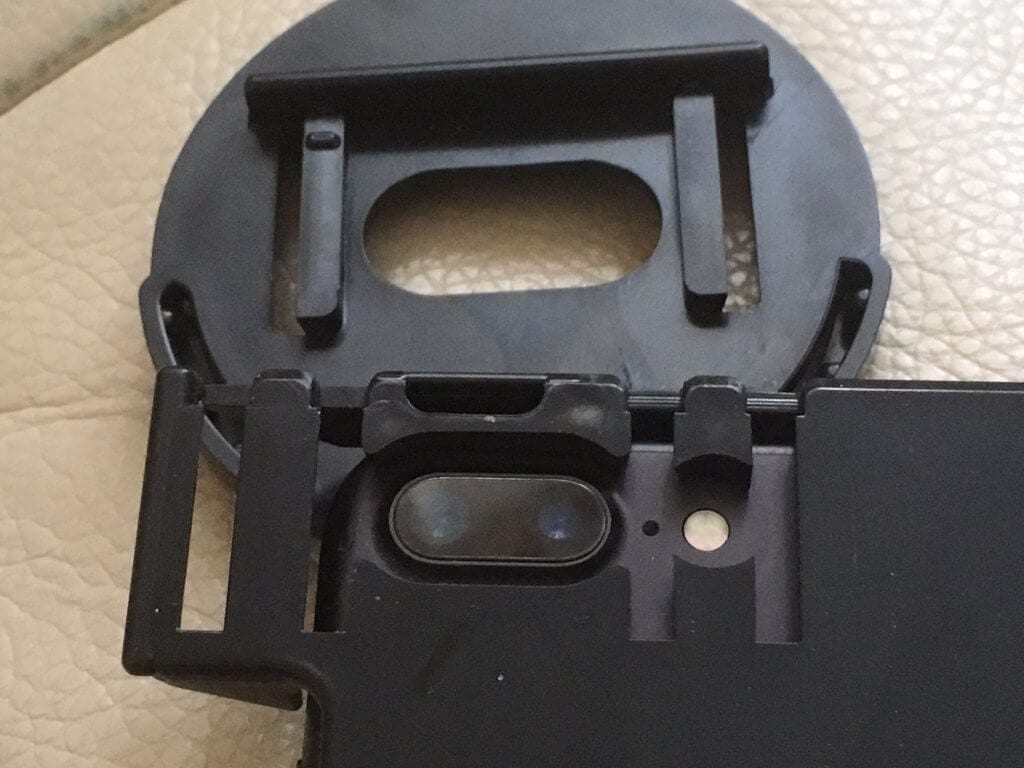 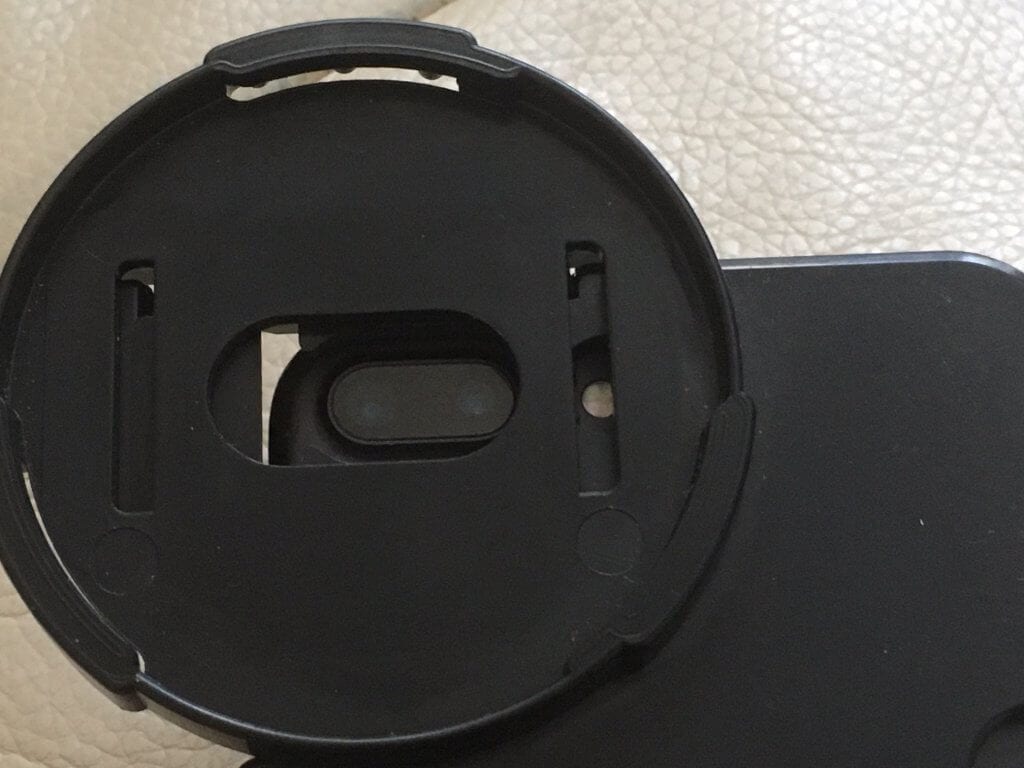 My Phone Skope kit came with an adapter for my Meopta 80HD and this universal adapter below. See the three rubber coated jaws? They contract and expand to fit a wide variety of optic eye pieces. The yellow button locks the adapter from changing size. 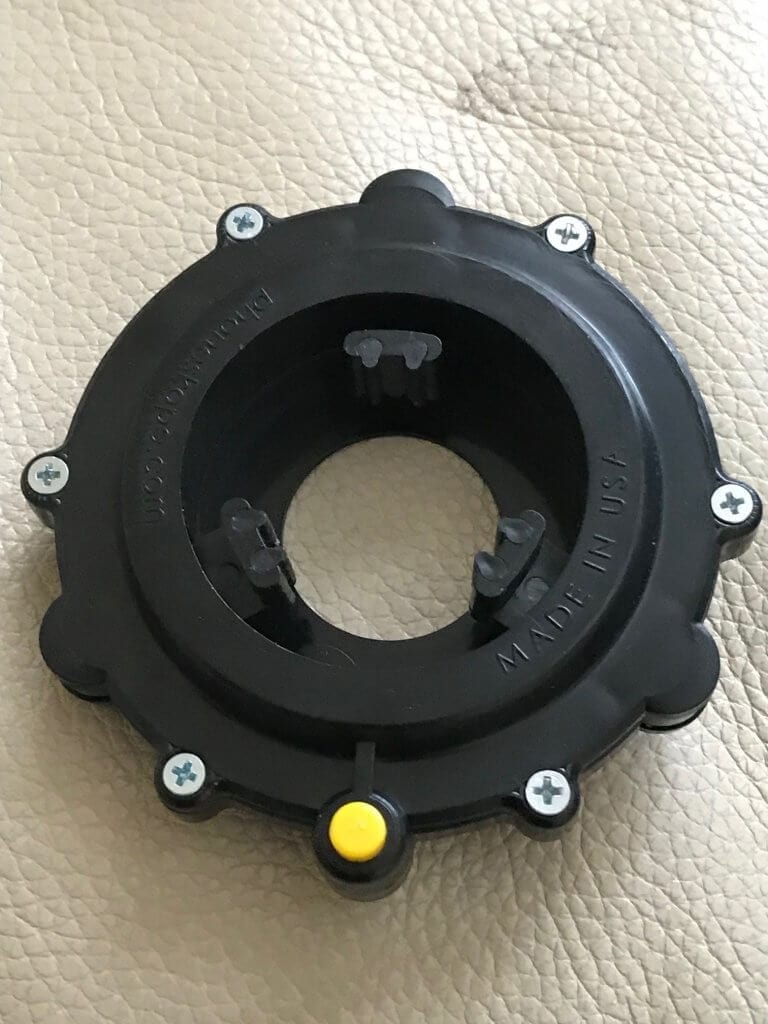 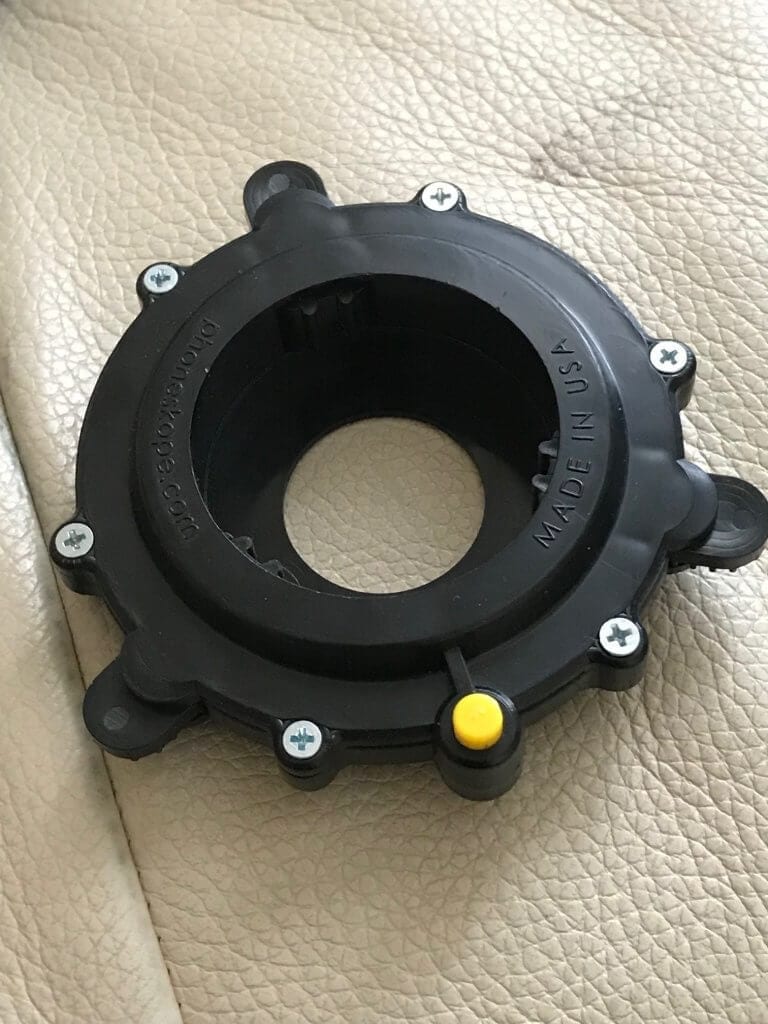 I am able to attach the this universal adapter to my Zeiss PRF range finder. 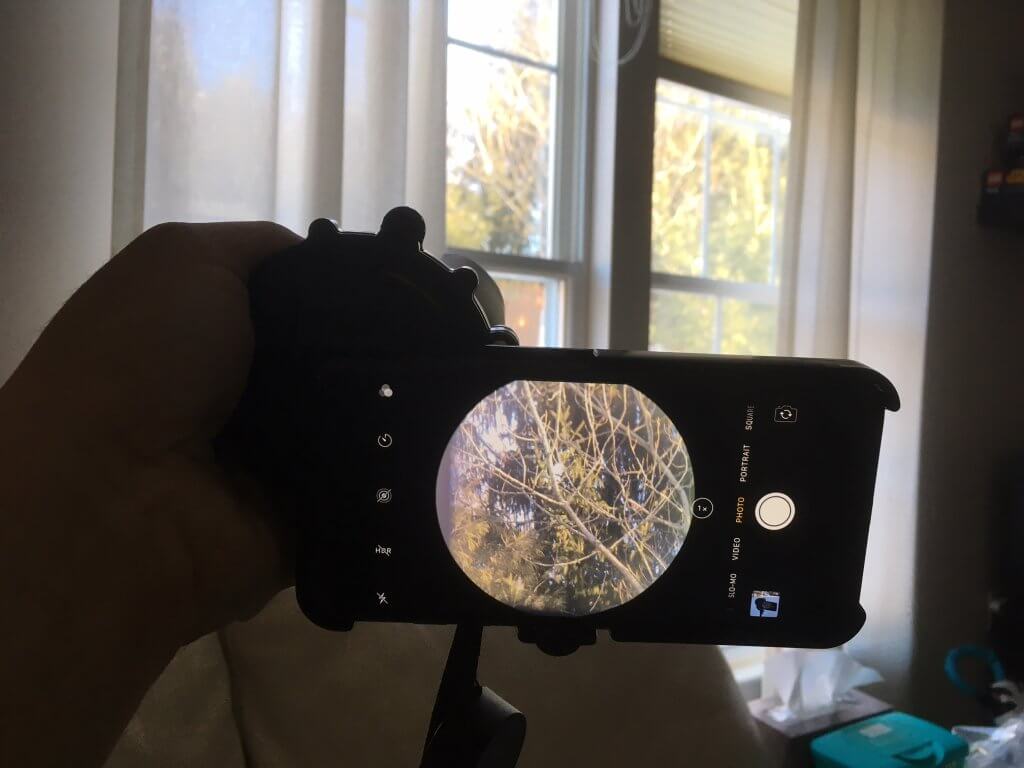 Here is what it looks like when you use the range finder with the Phone Skope.

If you go to their website you can order one that works for your phone it looks like they make adapters for all the major brands of phones. They even make adapters for GoPros and iPod touches. As you click on the options they even have adapters that fit popular cases like Otterbox and Lifeproof. So you dont necessarily have to remove your phone from the case you already have to work with Phone Skope.

The Phone Skope works great for binooculars, spotting scopes and range finders. They even make adapters for telescopes. These all work easily since these typically have no eye relief. Just put the camera up to the lens and record. Well what about trying to record what your rifle scope sees? You cant just put a camera lens up to those.  Well Phone Skope is working on their latest adapter called Skoped Vision. Not only does it allow you to record what your scope sees, but you can still use your scope like normal. 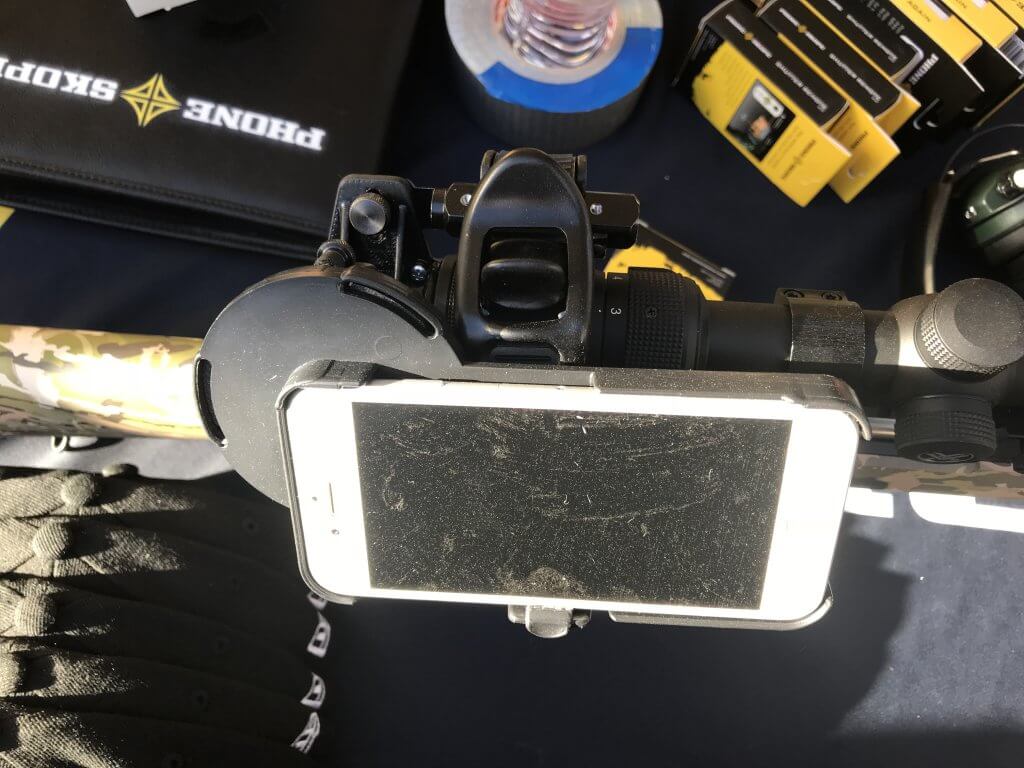 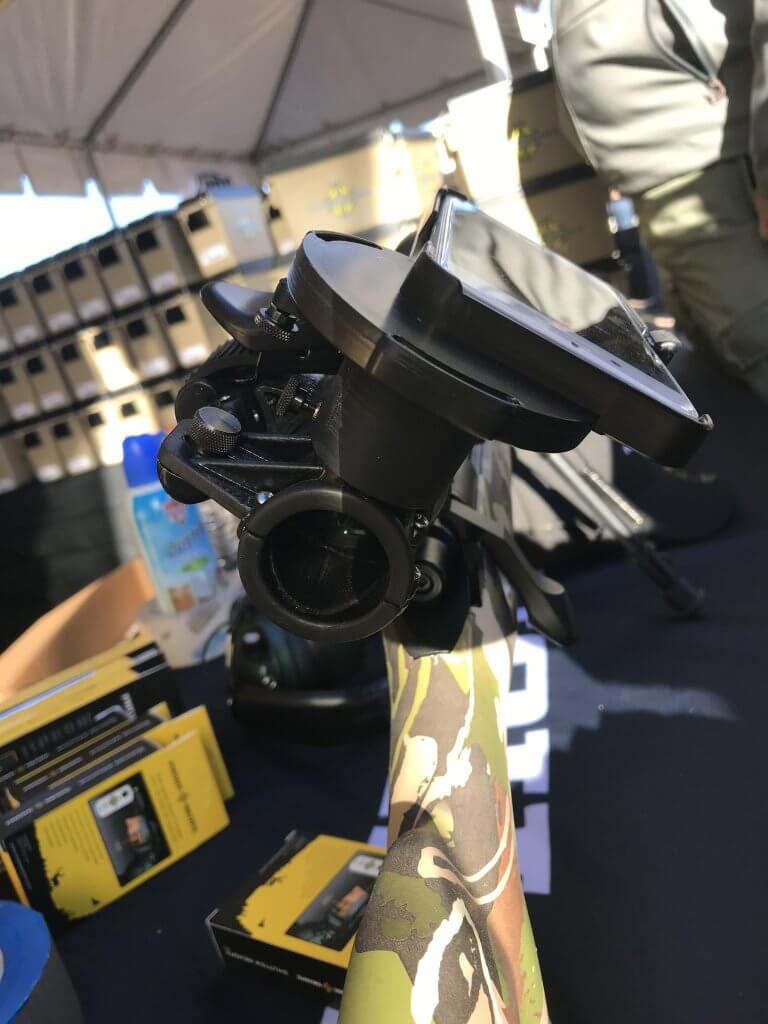 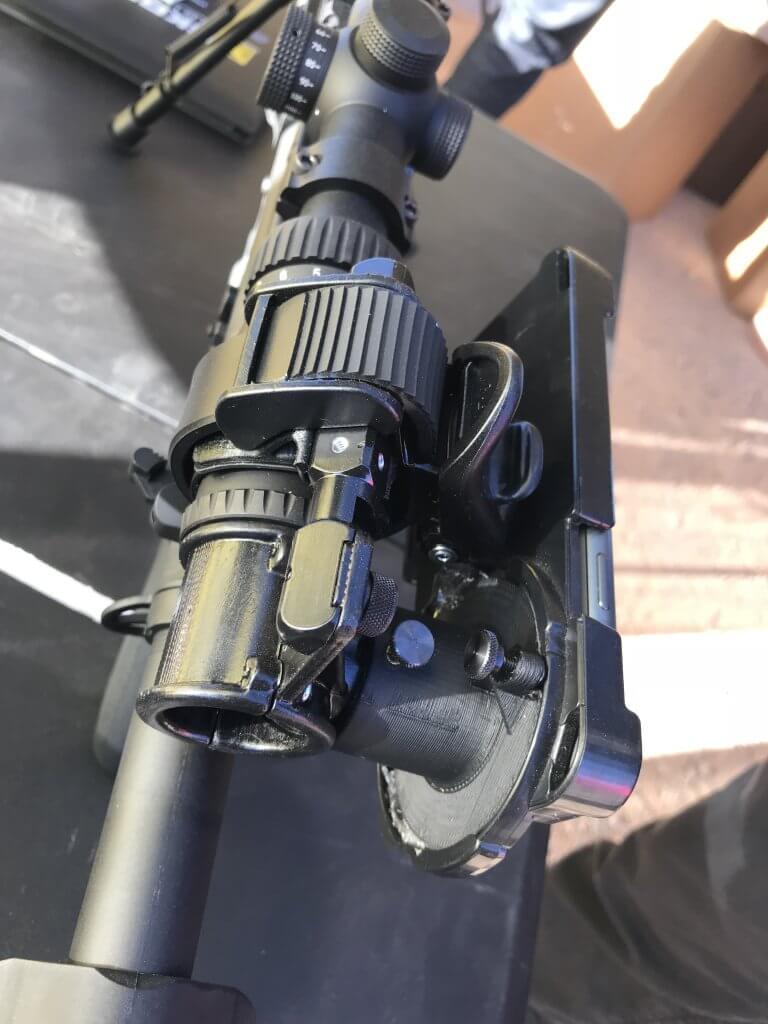 They are using a prism to bounce the image 90 degrees into the phone.  This allows you to still see through the scope and aim like normal rather than sticking a camera at the end and looking through your phone screen to aim.

Right now Skoped Vision is a prototype but will be available in June. It will retail for around $150 on its own. You can bundle it with a Phone Skope setup of course. I am very excited for Skoped Vision. Sure it helps to record video in a spotting scope to see the impact of the rounds sent down range. But now you can record your actual sight picture and analyze your point of aim vs point of impact. You could probably use the slow motion feature in your camera to capture the moment before recoil takes control of the gun. Obviously there are some draw backs. Depending on your gun’s setup, your sight picture might be disrupted by recoil and muzzle climb. I know with my SCAR17S the gun jumps a bit under recoil. I lose sight of my target so I could see capturing the actual moment where the bullet hits the target might not get captured by this rig. Even with that compromise it definitely seems like a great tool for being a better shooter. Also you can show your friends what a great shot you are.

Phone Skope cases are only $60, at least that is how much they charge for the one on my iPhone 7 Plus. Then you add the adapters based on your optic. Don’t see your optic listed? Fear not, they have the option for custom built adapters. You just give them certain dimensions and they will make you a custom adapter.