Have you ever wanted to capture the sight picture of your rifle scope? Holding your smartphone up to the lens doesn’t quite cut it. You have to get the lens in just the right position, and keeping it there is a real challenge. Well, Nexus Outdoors has a CNC Aluminum camera mount that allows you to use almost any video camera or smartphone to film your rifle scope. 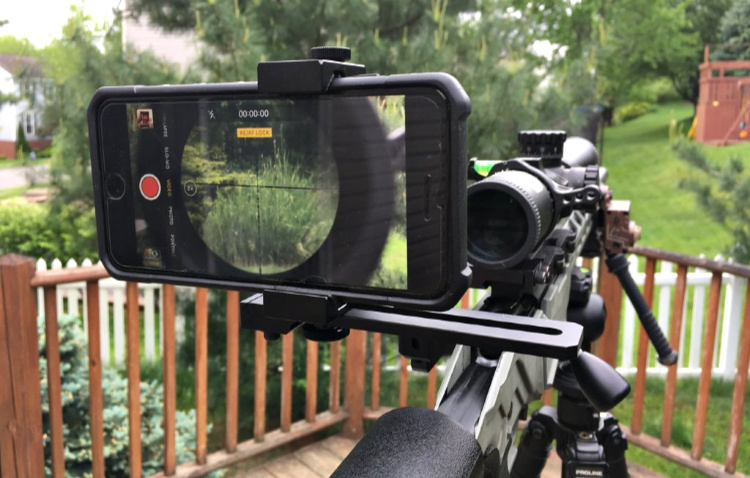 This article is from May 2018 – but the info remains good!

Filming or photographing a rifle scope sight picture is not as easy as it seems. There are digiscoping adapters available, like the Meopta Meopix and Phone Skope phone cases. But those only work with optics that do not have eye relief, like binoculars or spotting scopes. We posted about the Meopix and Phone Skope earlier, if you want to check out that article. The Nexus Mount solves this problem by holding your camera in the position you want.

The Nexus Mount attaches to your top rail via a rail mount. The rail mount does not have a cross lug for recoil, which is both a good thing and a bad thing. I have not tried this on hard-recoiling guns so I am concerned that pure tension and friction may not be enough to keep the mount in place. The one benefit to the lack of a recoil lug is that you are not forced to align the rail mount to use a Picatinny slot.

Take a look at the photo below. I am using a single mount for the scope on my Ruger Precision Rimfire. There is plenty of rail behind the mount. However, due to the position of the rear release lever, I only have half of the available rail to grab onto. 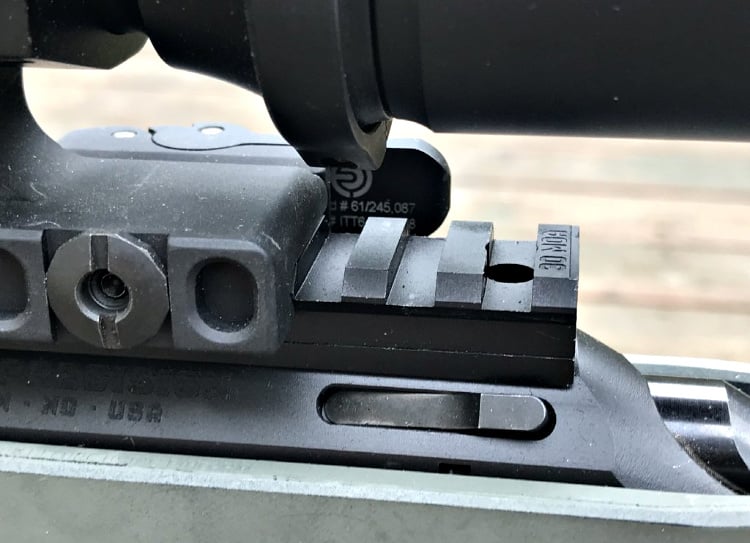 You can see how the mount hangs over and past the rail. 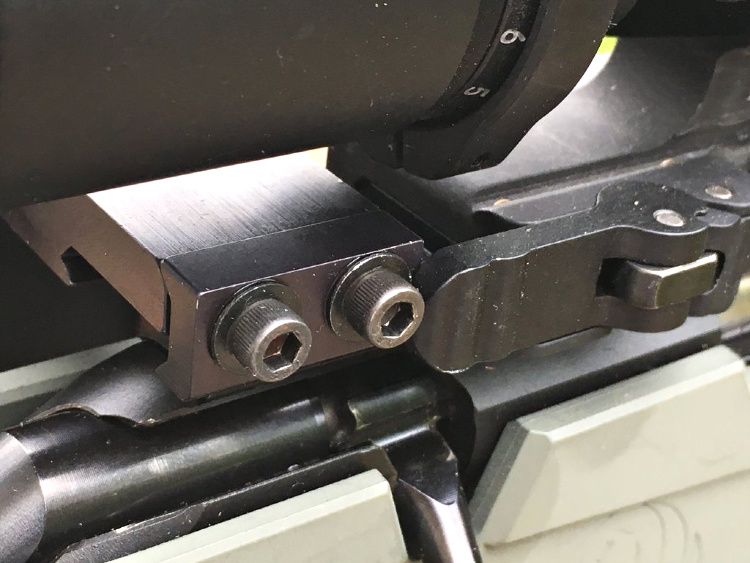 All you need to do next is attach the phone mount to the cross-bar and position your phone. The Nexus mount allows for height adjustment and you can slide the phone mount left or right. The long bar can slide forwards or back to help you position the camera lens for proper eye relief.

The long bar has preset holes and you bolt it into position with matching threaded holes in the mount. 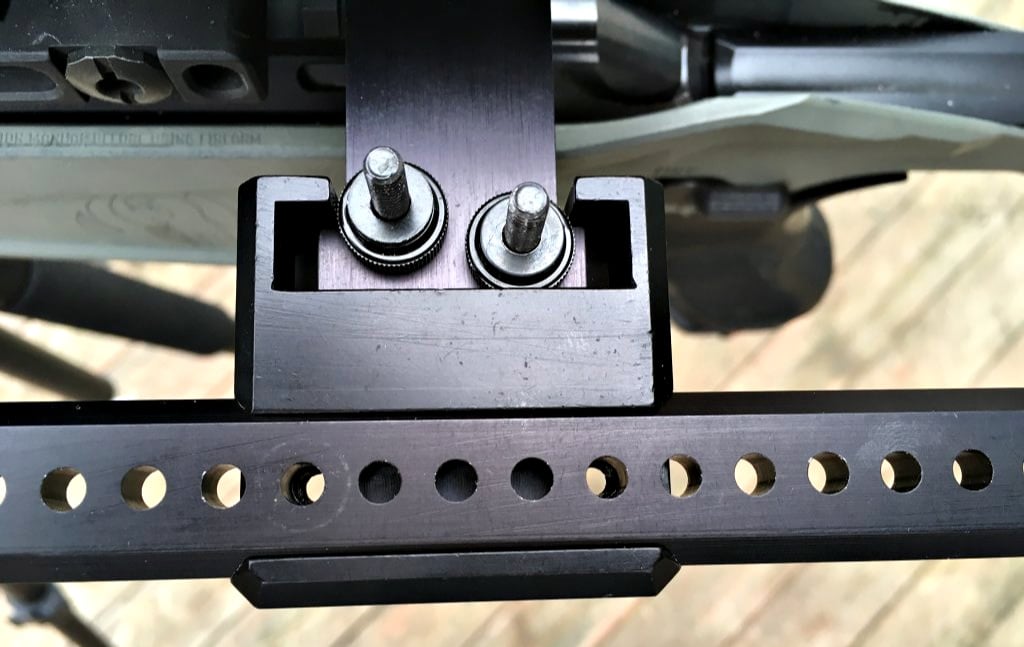 For height adjustment, the mount can slide up or down. Four threaded holes are there so you can adjust the height of the mount a decent amount, but most likely you will have issues with the cross-bar hitting the top of your stock . 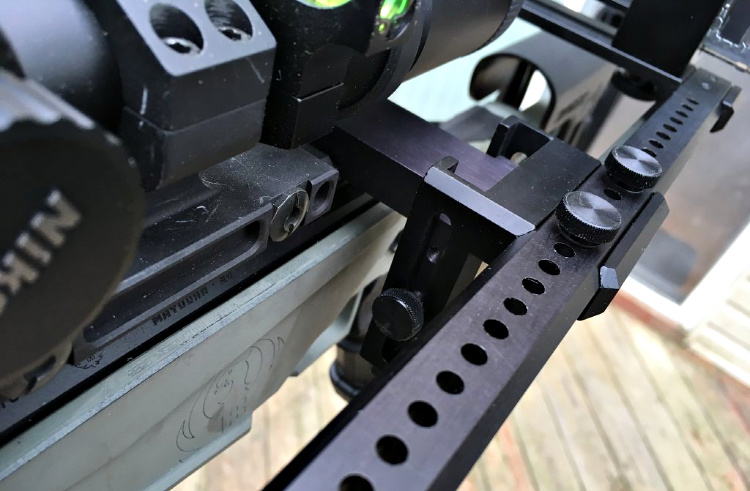 The cross-bar has one long slot so you can finely adjust your camera left or right. 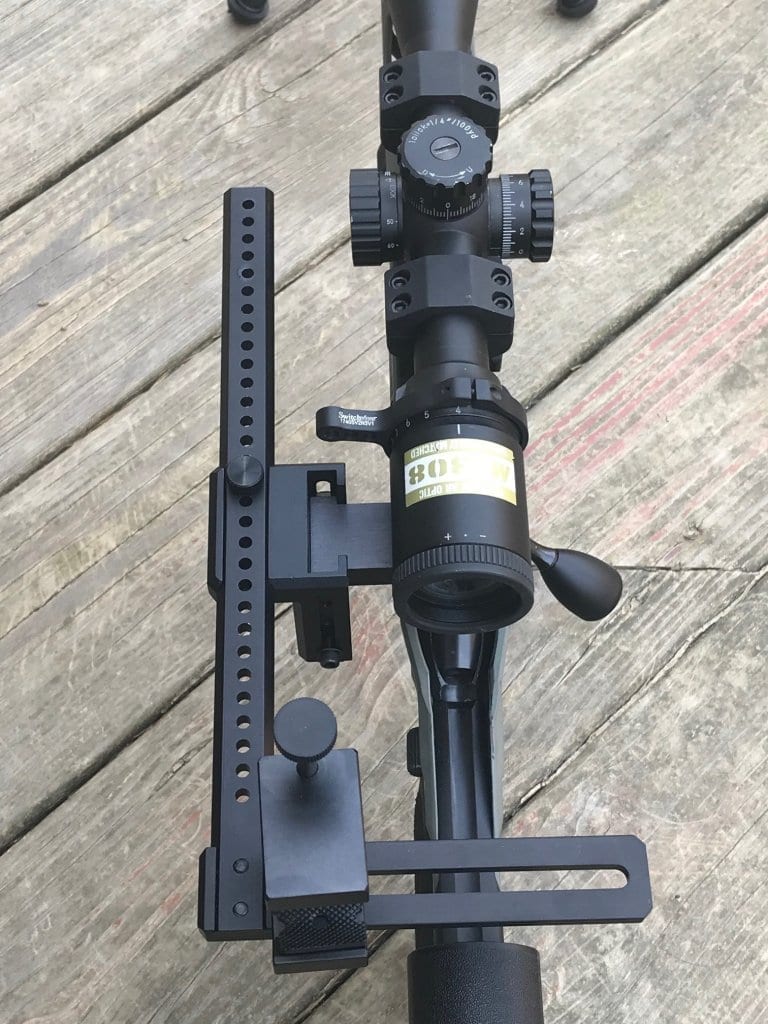 I noticed that the vertical and horizontal position of the camera lens is crucial and that is why those directions have slotted adjustments for fine increments. In comparison, the camera’s distance from the eye-piece is not as crucial so the sliding bar has 1/4″ hole positions.

Problems With My iPhones 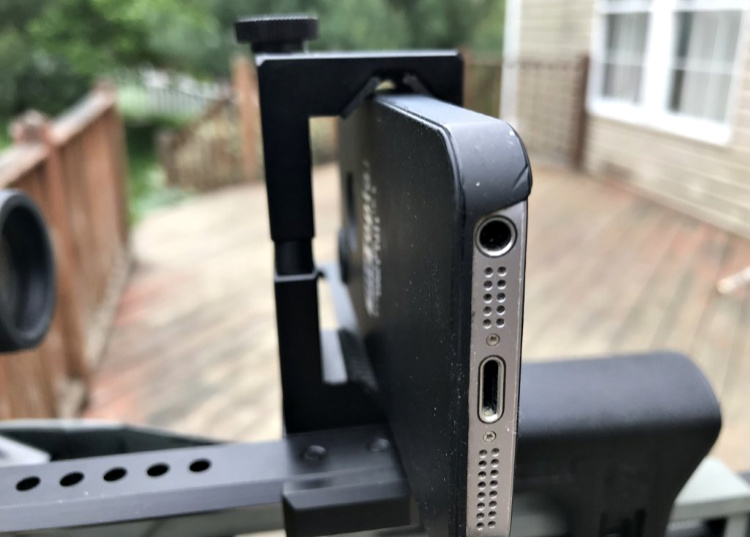 Then I have issues using my iPhone 7 Plus. This is due to the dual camera lenses.  The first issue is how the iPhone 7 Plus automatically switches between lenses. If it chooses the wrong lens, then you have to try and get the camera to switch back the lens you want or shift the whole assembly up or down depending on the lens you want. When using an iPhone X, the lenses are side by side in this orientation so it is easy to just slide the phone left or right inside the phone mount. 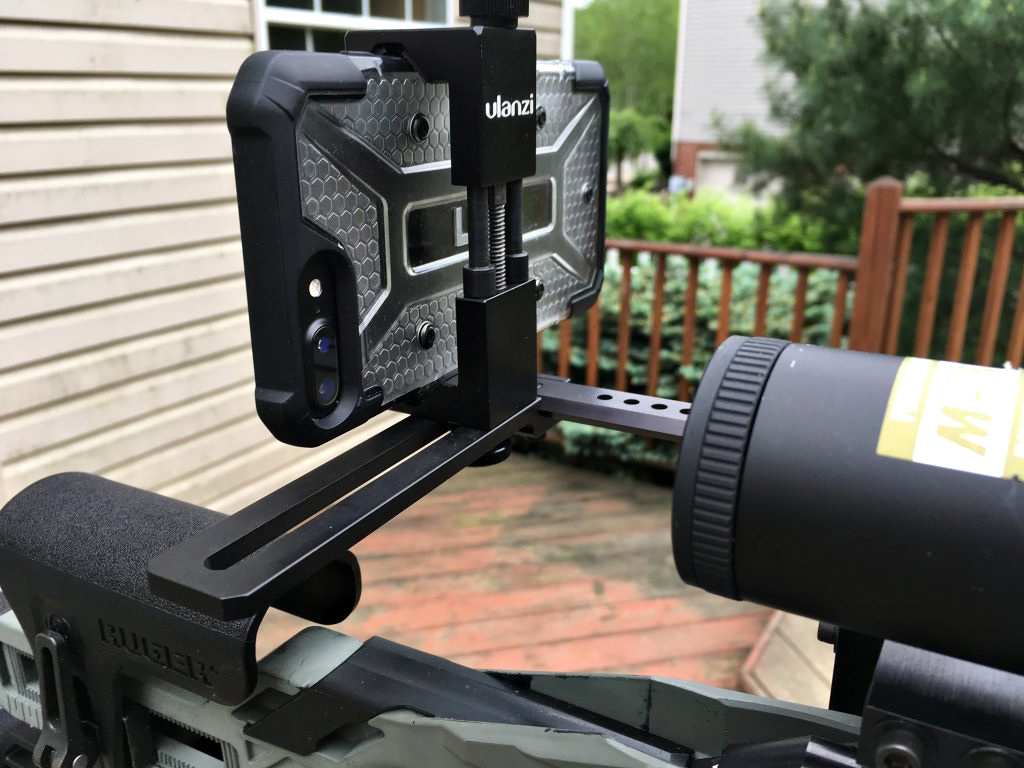 The problem of selecting the lenses is not as bad as this other problem of positioning the lenses with the body of the phone.  As I said earlier, the Nexus mount has a wide range of adjustability but this does not matter due to the phone I am using. There is only one position in which this phone will work with a scope. I have to place the phone mount all the way to the left but when my phone in the mount, the side volume button is positioned directly under the phone mount. Unless I use a thick phone case, the mount pushes the button, resulting in accidental activation of my camera. It takes pictures and starts or stops my videos when I don’t want it to. 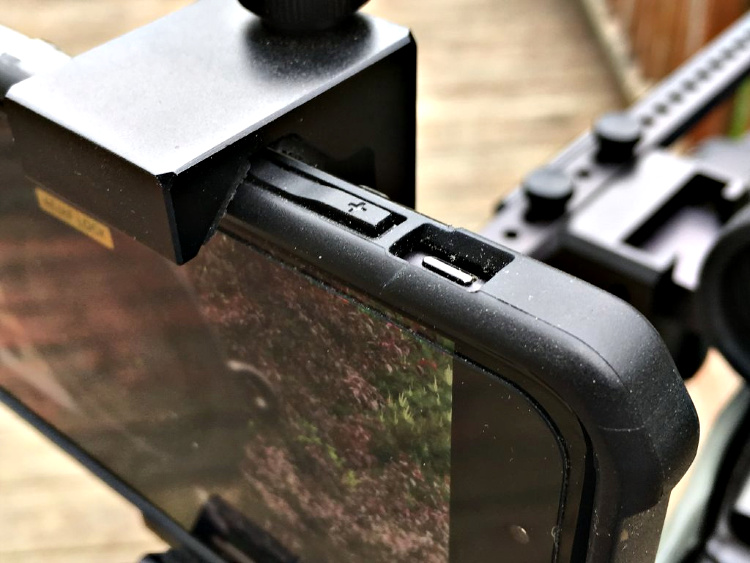 Couldn’t I just position the camera 180 degrees and have the mount hold onto it from the right? Nope. Not only is there not enough room but now the lenses are too high up and I cannot lower the Nexus mount low enough for the lenses to look through the scope.

Another issue is how far the mount positions the phone. I have difficulty shouldering my rifle while aiming through the phone screen. It is too close to my face. Take a look at the photo below. The camera mount sits directly above my cheek rest so it makes shooting my M1A awkward. 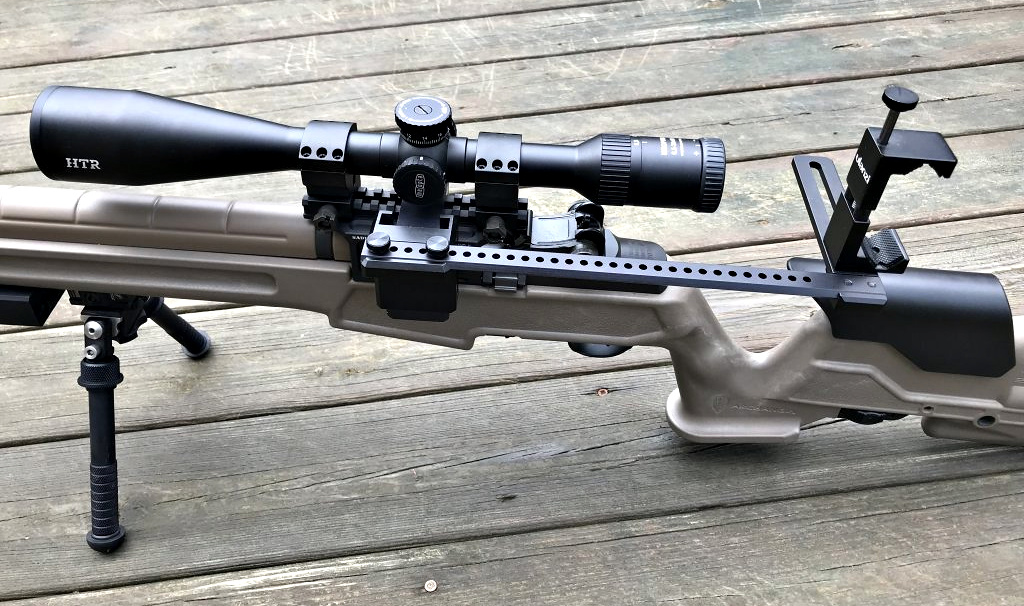 The issues I have with the Nexus camera mount are minor compared to the footage you can capture through your scope. With a rimfire rifle, you can film your impact on-target. However, due to muzzle climb on higher-powered rifles, you lose sight of your target for a brief moment when the rifle is shot.

Here, I’m shooting lollipops at 18 yards with the Ruger Precision Rimfire. The video was filmed using the Nexus camera mount.

In this video I’m testing the Nexus camera mount on the Ruger Precision Rimfire using a Nikon M308 scope.

With the help of my friend J.W. Ramp, we used his MK12MOD1 clone with a PVS-30 clip-on night vision scope. He was shooting 300 yards at night on steel and we were able to film the sight picture with the Nexus Mount. 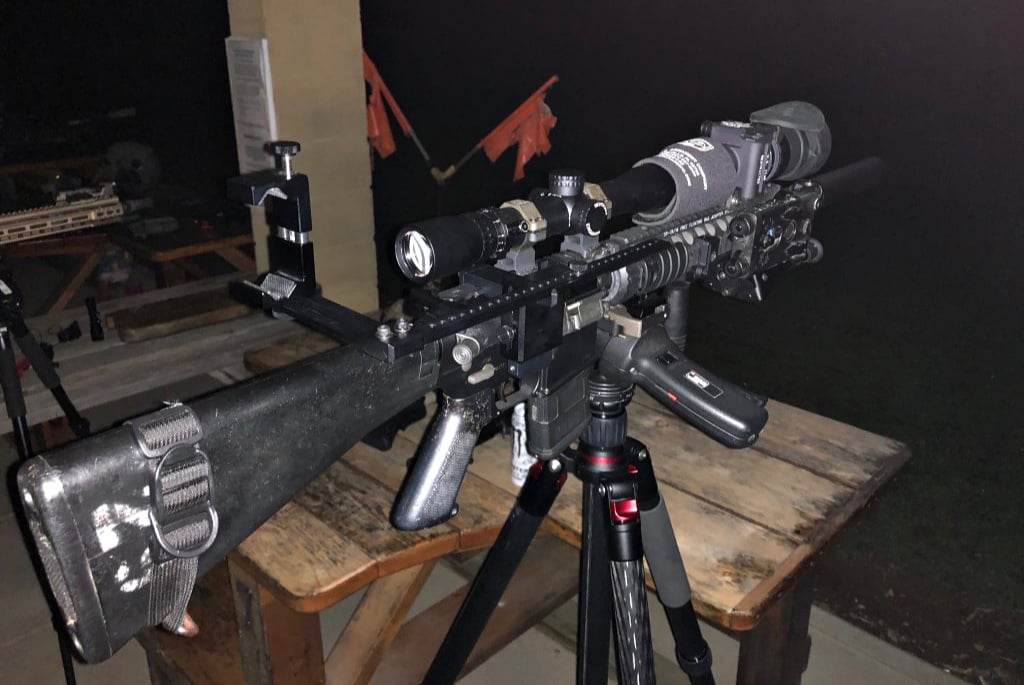 Here is a different rifle setup shot at night using a weapon-mounted laser and light. 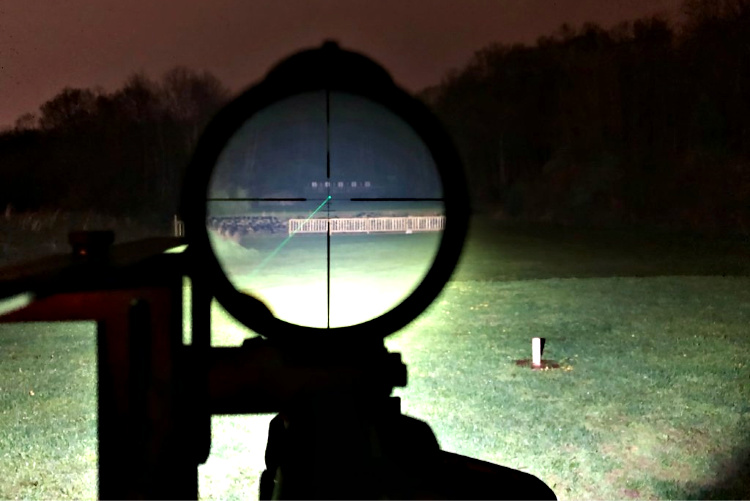 For hunting you can capture that kill shot on camera. Here is a video from Nexus Outdoors of a shot on what looks like a prairie dog.

By using an iPhone, I can use an Apple Watch to control the camera. I also get a live preview on the watch. I could aim with the watch if I wanted. 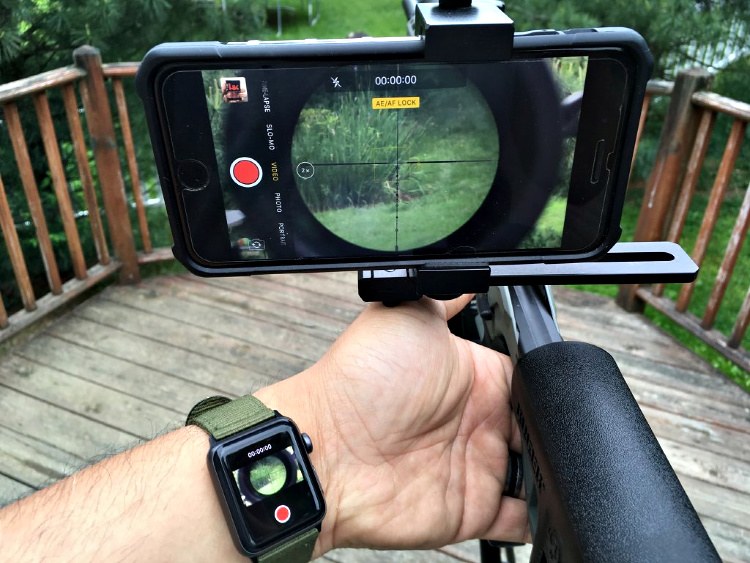 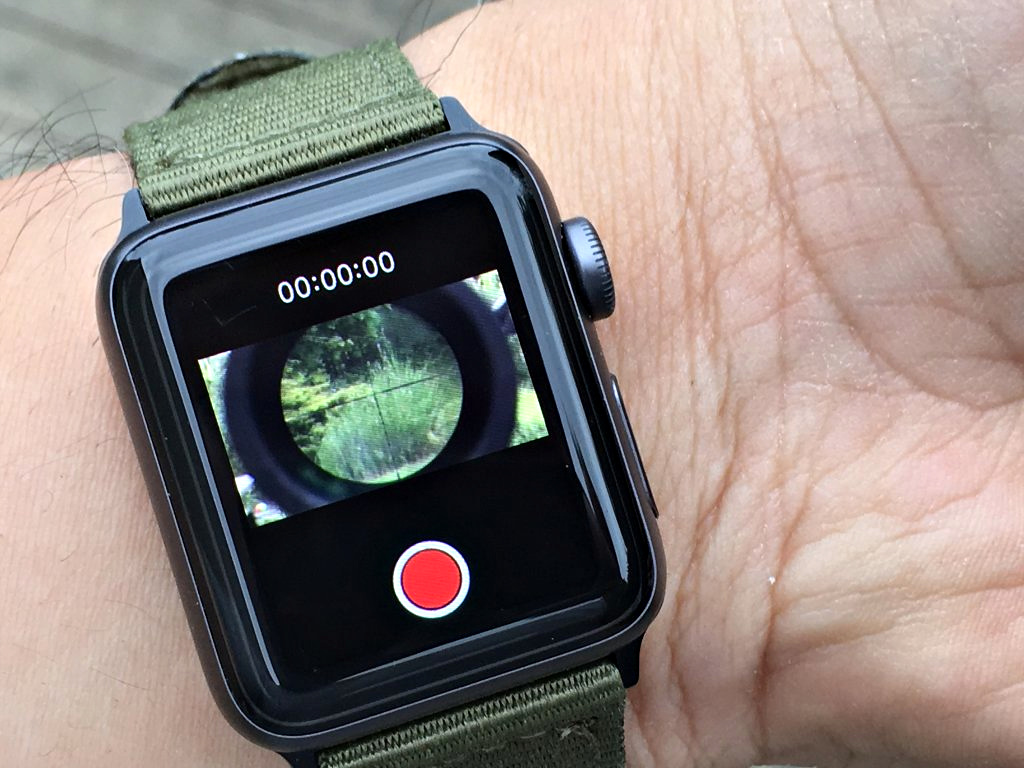 The Nexus camera mount is not necessarily just for cameras.  I was able to mount my PVS-14 night vision monocular since it has a 1/4-20 threaded hole. I tried to replicate my friend’s PVS-30 setup and mounted the PVS-14 in front of my scope. 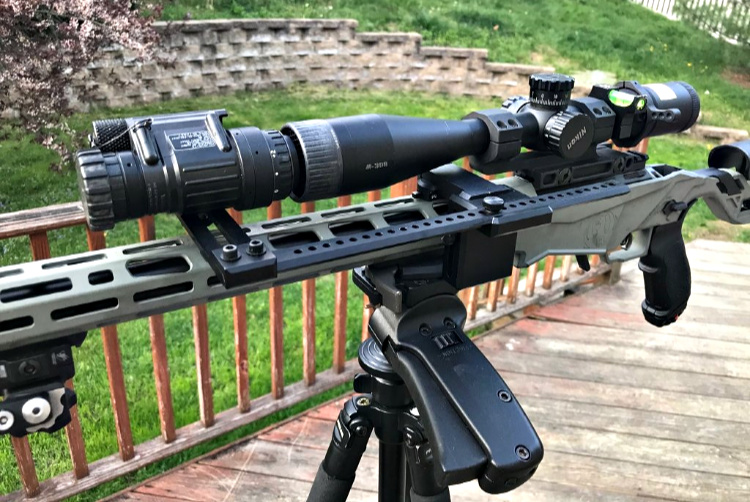 The optics of the PVS-14 were not designed to be viewed by a scope, so I didn’t have high expectations that this would work. The image is pretty bad, as you can see below. It was hard to see anything. 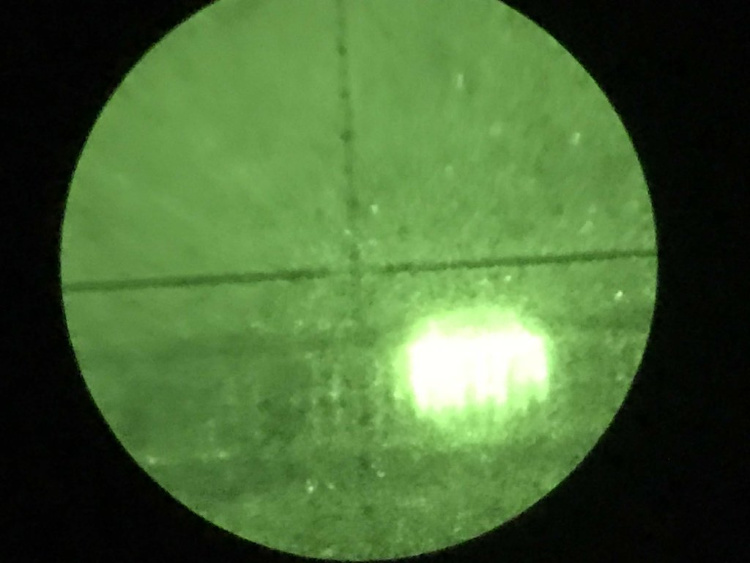 Then I tried mounting the PVS-14 behind my scope and got much better results. At least the image is much clearer. However, I was only able to use low power magnification. If I increased the magnification, it resulted in a distorted image. 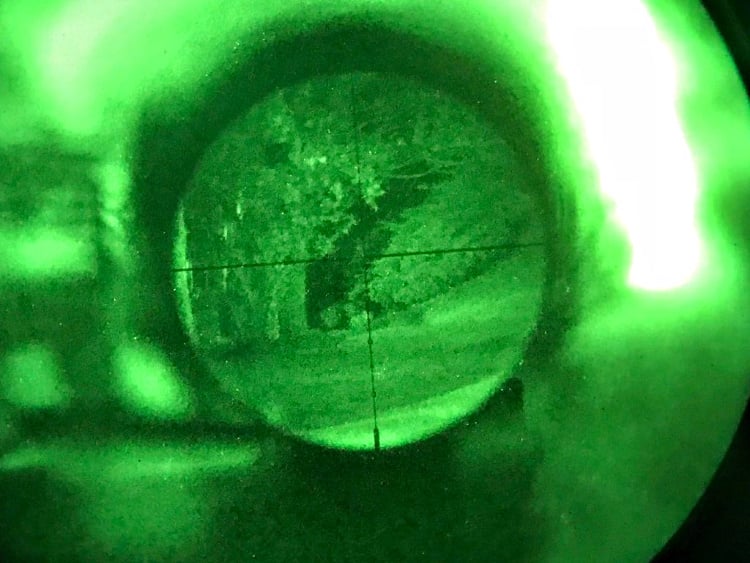 The Nexus camera mount is a well-built set-up. It does take a bit of setup time to position your phone in the sweet spot in order to get a clean sight picture. But once it is set up, you can take some cool photos and videos. I like filming in slow motion so I can see the bullet impact the targets. You need to do this when it is bright outside as the scope reduces the amount of light into the camera lens and slow-motion requires a lot of light.

The price of the Nexus camera mount is a bit pricey at $200 and that does not include the aluminum smartphone mount. However, since the camera mount can use any 1/4-20 threaded mount, you can order any phone tripod mount.

The coolest feature about the Nexus camera mount is that it allows you to film through the scope, but it does more than that. You can position a camera to look back at the shooter or have the camera offset looking downrange, although I feel there are cheaper options to get that type of footage. A GoPro with a rail mount could get you this type of image. The Nexus mount shines by allowing you to film through the scope.

The State of Vertical Grips in 2022

Five Reasons to Upgrade to an Extended Charging Handle