Full-auto shotguns tickle me. I was a machine gunner in another life, and I love shotguns, so the combination gets me right. Admittedly full-auto shotguns have never caught on, but that hasn’t stopped people from trying. I get the appeal. Your typical round of 00 buckshot fires nine pellets per trigger pull, and each pellet is roughly a .33 caliber ball.

Each of these balls has enough energy and penetration on its own to kill a man. A three-shot burst could lay down 27 pellets in a small area in a second of maybe 1.5 seconds. That’s a lot of lead to lay down in a second. It’s dang near a full magazine from a AR 15. 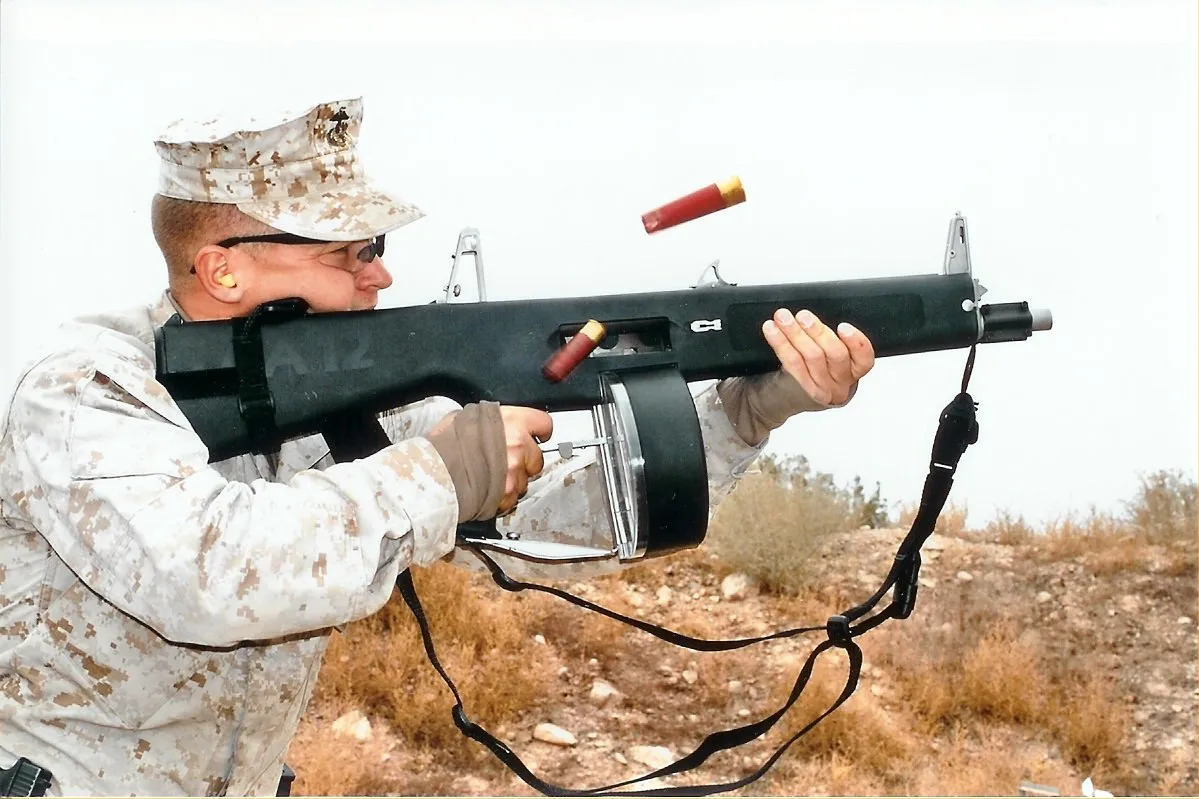 The Five Most Fabulous Full-Auto Shotguns

Thanks to shows like Future Weapons, YouTubers like FPSRussia, and video games like Call of Duty, the AA12 is likely the most famous of our full-auto shotguns. This box-fed beast came from the mind of Maxwell Atchisson in 1972. Since then, the gun and its design have changed hands, changed names, and currently is owned by Sol Invictus Firearms.

This full-auto-only fire shotgun is a 12 gauge using an API Blowback system and fires from the open bolt. The design uses an inline stock and, when combined with the semi-auto action, produces a very soft shooting gun.

Atchisson’s shotgun fires at a relatively slow 300 rounds per minute, making it very easy to control and fire single shots or short bursts.

Initially, the AA12 used an 8-round box magazine, but the gun used 20 and even 32-round drums as the design progressed. The AA12 fired up people’s imaginations and made its way around pop culture. However, very few have ever been produced. Sol Invictus Arms seems to be trying its hardest to create semi-auto variants for civilian consumption but has hit some roadblocks.

On the flip side of the AA12 is the very plain-looking Remington 7188. Unlike most full auto shotguns, the 7188 doesn’t use a box magazine but your standard tubular magazine. Remington 7188s were full-auto Remington 1100s designed for Navy SEALs in Vietnam. These guns provided an anti-ambush weapon for the SEALs, and six variants, each with minor changes, were made during its short service.

Combining an eight-round magazine tube with a firing rate of 480 rounds per minute meant you went Winchester reasonably fast.

The idea was to aim in the general direction of your enemy in the jungle and let loose, hoping one of the many dozens of pellets hit something. Accuracy by volume is personified with this gun.

SEALs used both standard nine pellet buckshot and 27 pellet number 4. Imagine dropping 216 No. 4 pellets in a few seconds. You’d have a mini version of that scene from Predator. The weapon was popular enough to see a few variations but was never a mainstream weapon, and the remaining 7188s were eventually converted to semi-auto only.

The Close Assault Weapon System program started in the 1980s when cocaine was pure, and the weapons designs were not. The Army wanted to increase the hit potential of their troops within 100 to 150 meters, and the solution appeared to be some advanced new shotgun. Lots of guns were submitted to the CAWS program, but HKs are my favorite.

Their bullpup, fully ambidextrous shotgun was a semi and full auto fired from a ten-round magazine using the recoil-operated system with a moving barrel.

These high-pressure rounds were initially produced in brass cases and would later be loaded in high-strength plastic and aluminum to reduce weight. These more robust cases allowed for the high-pressure design and would not deform when left loaded in box magazines. They used tungsten buckshot to penetrate mild steel plates out to 150 yards. Once the CAWS program was scrapped, HK scrapped the gun, sadly.

A quasi-CAWS entry that doesn’t get much attention is the Smith and Wesson Assault Shotgun. S&W has never been a big name in the shotgun world, but they produced this gun in the 80s to try to get that sweet government money. The S&W Assault Shotgun was a select-fire, box-fed shotgun that fired standard 12 gauge rounds.

S&W experimented with flechette ammo, but like usual, the flechettes weren’t stable. This killed its ability to compete in the CAWS contest.

Still, seeing S&W create an Assault Shotgun is somewhat notable. The weapon looked like a child’s drawing of an M16. It fired from a closed bolt and used a detachable 10-round box magazine. The AS-1 and AS2 models were semi-auto only, but the AS-3 introduced a select-fire mechanic with a firing rate of 375 rounds per minute. After the AS series, Smith and Wesson dipped out of the shotgun world until 2021 with the release of the M&P 12 gauge.

Last, and admittedly least, the Pancor Jackhammer. Lates 90s and early 2000s video games would have you believe the Pancor Jackhammer was everywhere. It saw life in games like Fallout 2, Max Payne, Far Cry, and many more. In reality, only two prototypes were ever made. So why it’d make the list?

The same reason it’s in those games, it’s freaking cool. The Pancor Jackhammer is a select-fire, bullpup, detachable cylinder shotgun. The action has a gas seal to prevent shooters from muzzle gap blast that involves the barrel moving rearward as the weapon fires.

The detachable cylinders, aka cassettes, hold ten rounds of 12 gauge ammo. The idea would be a special 12 gauge round preloaded into the cylinders.

The weapon was only 31 inches long and packed a ton of firepower. The fanciful design was forward-thinking but likely too forward-thinking in the long run. Only a single example exists today and is in the hands of a private collector.

Why Do Full-Auto Shotguns Fail?

It comes down to a simple, singular aspect, why do you need a full-auto shotgun? I’m not talking about the Bill of Rights vs. needs. I should have a full auto AA12 purchased from Amazon and delivered in two days. I’m talking more about the context of military and police needs.

Shotguns aren’t designed to be weapons that lay down suppressive fire, which is why most full auto rifles and machine guns exist. Submachine guns benefit from full auto because of their controllability and the need to make multiple hits due to pistol rounds. Shotguns don’t have that problem.

A round of buckshot does a good bit of damage, and needing to follow up with three or four more isn’t necessary. Additionally, shotguns don’t offer the level of control that SMGs provide, and the recoil can be excessive in full auto. Full-auto shotguns don’t have much or a role, and if you need quick follow-up shots, a semi-auto shotgun like the Benelli M4 works best.

Full-auto shotguns don’t have a niche to fill. At least they don’t just yet. I’m always hopeful for the future.

The Taurus CT9 – the PCC That Coulda Been