This article about 224 Valkyrie (the .224 Valkryie cartridge) originally ran in May of 2018. With the continued release of specialized .224 loads and 224 Valkyrie barrel options, it seems appropriate to periodically republish it. Updates since its original publication have been made by various Mag Life contributors.

One thing in common in all 224 Valkyrie offerings is the intention to provide exceptionally flat trajectories and match accuracy at extreme ranges. Federal Ammunition says the .224 Valkyrie cartridge(s) offer significantly less wind drift and drop than other loads in their class, with up to half the recoil of cartridges with comparable ballistics. Many reviewers (and end-users) substantiate this.

There’s always a new cartridge out there. Some grow legs while others remain relegated to small communities of Wildcat enthusiasts. Meet the…

Earlier this year, the folks at Federal Ammunition announced the 224 Valkyrie. Its purpose in life is an effective and accurate long-range shooting. What makes it different is that it fits into the same “gun form factor” as the pervasive .223 Remington. Let’s explain that.

When I say form factor, I’m referring to the practical limitation – magazine dimensions. The well in AR-type lower receivers is only so big, so a cartridge that’s longer simply won’t fit and your rifle becomes a single-shot breech loader. The 224 Valkyrie, like the .223 Remington, uses a .224 diameter bullet but the brass case is different. The Valkyrie is based on the .30 Remington / 6.8 SPC cartridge. In fact, you can think of the Valkyrie as a necked-down 6.8 SPC. So, even though the bullet is the same diameter, you’ll need a 224 Valkyrie barrel due to the different chamber dimensions. You’ll also need a 6.8 SPC bolt although the upper receiver is the same.

Like the 6.8 SPC, the Valkyrie will expect a tweaked magazine made for the round since the geometry is different. So, the practical takeaway is to use 6.8 SPC magazines for your Valkyrie rifles even though the lower receiver and the corresponding magazine well are the same as any other .223 Remington rifle. You might get a .223 mag to work, but you also might find erratic feeding. Spend the extra few bucks and get the right ones.

Here’s why the Valkyrie is particularly interesting. While there are other great long-range cartridges available in larger AR-10 platforms, the 224 brings that type of range to the smaller AR-15 family. Standard loads range from 60 to 90-grain bullets, so the projectiles are heavier than most .223 Remington bullets, and since caliber is the same, the Valkyrie bullets are long and slippery. That means that they will carry velocity better over distance. That also helps with minimizing wind drift. So, the Valkyrie drops less and is less affected by wind.

Marketing materials claim that the .224 Valkyrie can stay supersonic to 1,300 yards. That’s true, at about 5,000 feet above sea level. Where I am, barely above sea level, it stays supersonic past 1,000 yards with ease. With no accuracy-killing super to subsonic transition until well past 1,000 yards, you have a predictable performance to four-digit yardage territory.

To put real numbers on that (considering average atmospheric conditions where I’m located) a 90-grain Valkyrie will drop 381.08 inches over 1,000 yards while a 55-grain .223 bullet will fall 452.99 inches. The difference in drift with a 10 mph crosswind between those two is 59.92 versus 101.5 inches respectively.

Your .224 Valkyrie mag will also serve as 6.8 magazines — typically. It’s always best to check with the manufacturer of course. 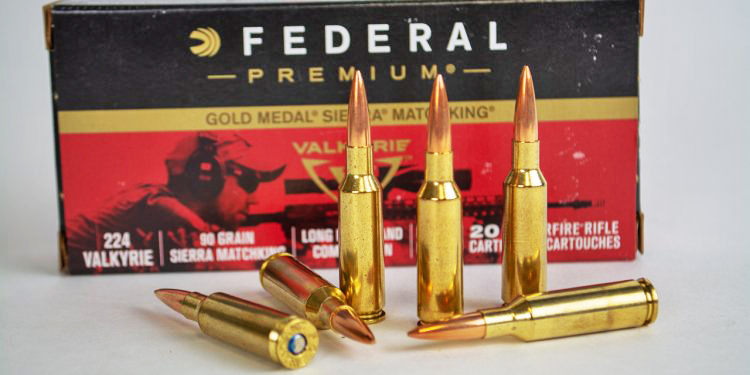 The Valkyrie is an interesting cartridge and I’m thinking it’s gonna catch on.