I love geeking out about shotguns. I love shooting shotguns, and I love everything about shotguns. Armscor’s VR series are fun guns that are available in multiple configurations. Traditionally, the VR series has consisted of sport-oriented magazine-fed semi-automatic shotguns but the Armscor VRPA40 is a bit different. Oddly enough, it’s the most traditional shotgun in the VR series. It’s the only pump-action shotgun in the VR line, which, by the way, is what the PA stands for in the name. The layout is very traditional for a pump-action shotgun, except it has a massive magazine well that accommodates the same metal VR magazines that we all know and love.

Breaking down the VRPA 40

The VRPA 40 follows a very traditional layout with a straight stock and even a useless magazine tube. The magazine well is placed dead center of the receiver and is quite wide and fitting with the VR magazines. The gun uses an AR-style magazine release and a rather odd pump release. More on that later.

Armscor did outfit the gun with a scope rail for adding red dots, as well as a ghost ring rear sight and a high visibility front sight. The rail is mounted low to allows for easy co-witnessing with miniature red dots. The VRPA 40 is also outfitted with a robust heat shield for the half of the barrel. With 19-round magazines and quick-and-easy reloads, you might just need it. 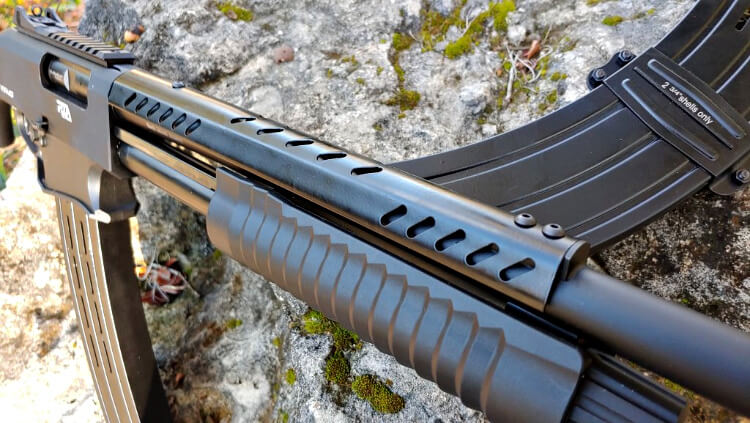 The 870-style safety button is placed behind the trigger and is plenty accessible. The VRPA 40 is even complete with sling swivels to tack on your favorite sling. Its a well put together shotgun with all the modern features and trappings of a good tactical shotgun.

The inside of the 20-inch barrel is threaded for Mobil chokes. The chamber is 3 inches, and with 5 and 9-round magazines, you won’t have issues. The 19-round magazine is 2 3/4 inch shells only. 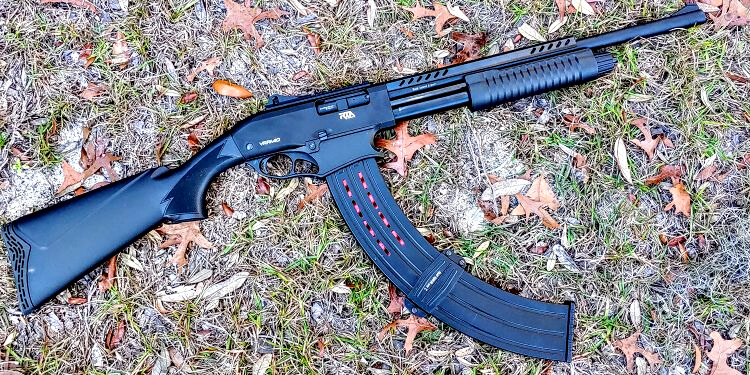 Like every modern tactical shotgun beside the Benelli M4 and anything with the adjustable stock, the LOP is a bit long. A good 1.5 inches could be trimmed. The safety and magazine release are easy to reach, but the pump release is placed a good bit forward of the shooting hand. It’s placed under the action and requires a mighty reach forward to activate. The good news is, like any other shotgun, the pump release isn’t necessary after shooting the gun.

The cheek weld is plenty comfortable and allows for the easy use of the weapon’s iron sights. The pump is textured, but not enough. I did find my hand sliding a bit when racking the weapon with serious gusto. I do wish it didn’t slide in my hands and had more fine texturing. So skateboard tape would likely give me a hair more control over the weapon’s action. 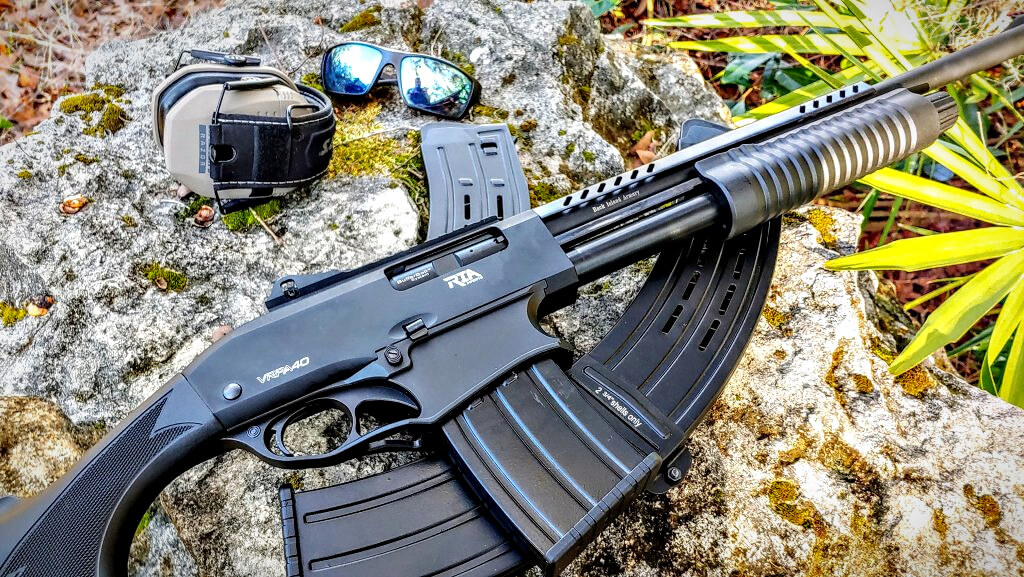 The VRPA 40 is rather light, which I do like when it comes to shotguns. The magazine well’s placement allows a good balance with the gun. When the gun is unloaded, its only 6.9 pounds. By adding different magazines, the weight changes, and a fully loaded 9-round magazine is quite bulky and very heavy. You’ll most certainly feel the weight, plus you lose your ability to take a prone position, hell you can barely take a kneeling position with this boomerang we call a magazine. 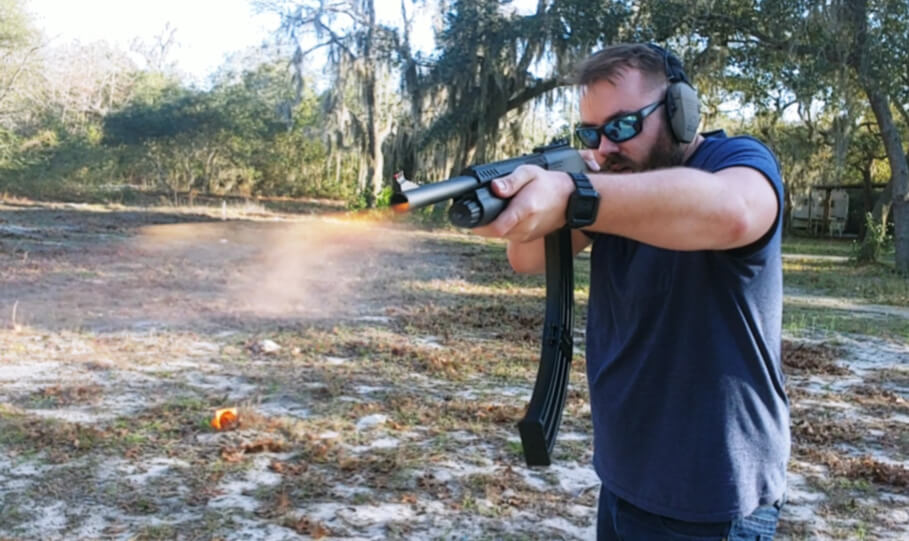 The VRPA 40 and magazines work well together and cycle without issues. The biggest thing the end-user needs to do is to make sure the rim of the top round is as far back as possible. This ensures the magazines load easily into the weapon and don’t get caught as you shove them into the magazine well.

The pump action is deliciously smooth and quite light. It glides rearward had has no issues picking up rounds from the magazine. There is surprisingly little tension when pumping the weapon. The trigger is a little mushy, and a little long, but serviceable enough for shotguns at shotgun ranges. The VRPA 40 ejects the shells consistently and easily. Recoil isn’t harsh, and the gun’s built-in rubber shoulder pad is a nice touch.

Since this is a mag-fed shotgun, the handling and manual of arms are a bit different than your standard pump. There is no means to shoot two, load two. However, port loading still seems to be possible. With an empty magazine, I lock the bolt back to the rear and toss a round through the port and work the action. It works without complaint, so if you run the weapon dry, an emergency reload is possible. Or you can add a round to the chamber, then reload to get that +1.

I’m not gonna lie. The 19-round magazine is fun and goofy, but it sucks to load. It’s a mighty fine hand workout. The worst part about it is that once it’s loaded, it seems to take no time to unload downrange. Beyond some crazy competition use, I don’t see a real reason for it. The nine-rounder offers plenty of capacity, and the size is balanced enough to be useful. The two 5-round magazines are small and light enough to work well too.

When its time to reload, the empty magazines don’t drop free. They are easy to remove manually, or you can shake the gun a bit, but it will take additional effort on your part to free the magazine. Inserting the magazines is pretty easy to accomplish with the 9 and 5-round magazines, but the 19-round magazine is trickier. The weight plays against you, and you have to slam that bad boy home to get it to work. It’s much easier on an open action, but can be done with a closed action and a spare helping of force. 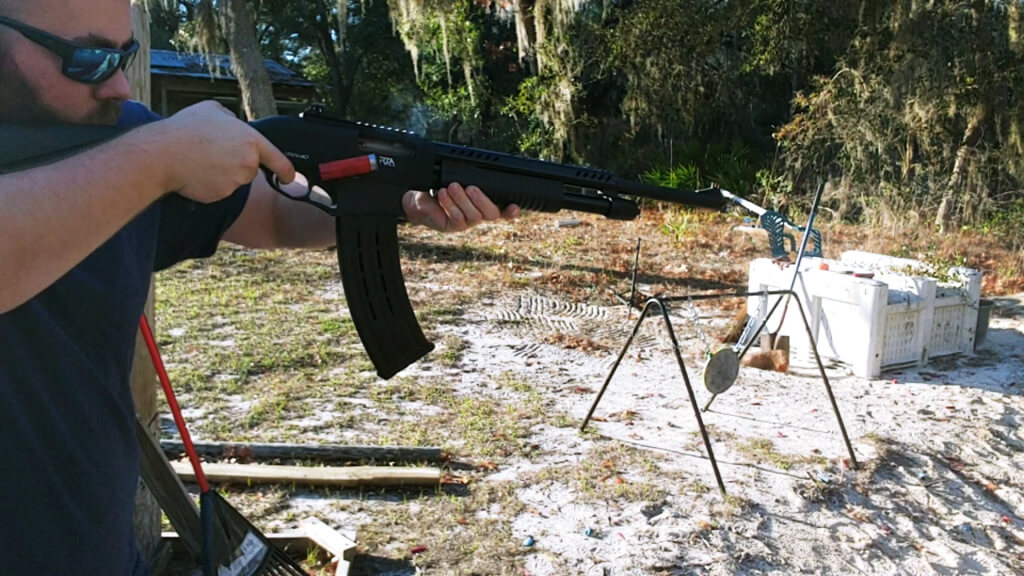 There is something fun about a pump-action shotgun with a large capacity and the ability to swiftly reload. You can rightly beat yourself up with buckshot and slugs, but some el-cheapo Walmart birdshot will leave you plenty satisfied. I’m almost tempted to take this to my local skeet range with the 19-round magazine just for the mischief.  Also, just FYI, a company called Taylor Freelance makes +3 magazine extensions. 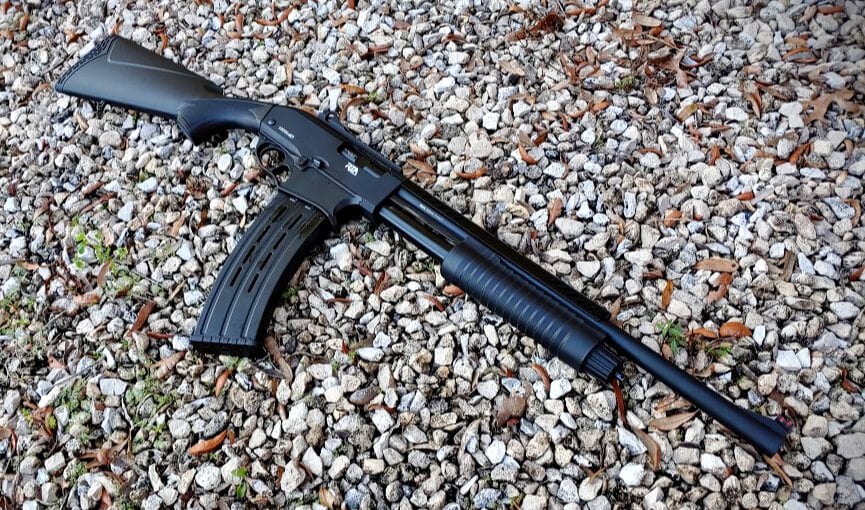 The VRPA 40 runs reliably and handles well. The biggest downside is the fact that there is no means to swap the pump or stock for an aftermarket option. I’d rather have a Magpul setup, but that’s not happening anytime soon. It handles like a much more expensive shotgun when you consider its price. I’d put it on par with a Mossberg 590. It’s no Benelli or Beretta, but it is a well made and very functional shotgun.