Some of you folks may remember I reviewed the VR 60 just a few months ago. I found it to be a fun, and reliable little auto loading, mag-fed shotgun. It looked a little goofy, almost like an M16A2 in nature. It did work though, so it was hard to hate. Rock Island Armory certainly saw an opportunity with box-fed shotguns and continues to import newer models.

The current model is the VR 80. The VR 80 is very similar to the VR 60 but more refined and much more ergonomic. It brings back the AR wannabe styling and similar controls.

Clearly, when compared side by side the VR 80 is much more modern and AR-like. This is no doubt due to the M-LOK rail system, the sleek barrel sleeve, and the smaller, less 1980s stock and pistol grip design. The VR 60 came with a carrying handle rear sight and fixed front sight. The VR 80 comes with flip up sights. 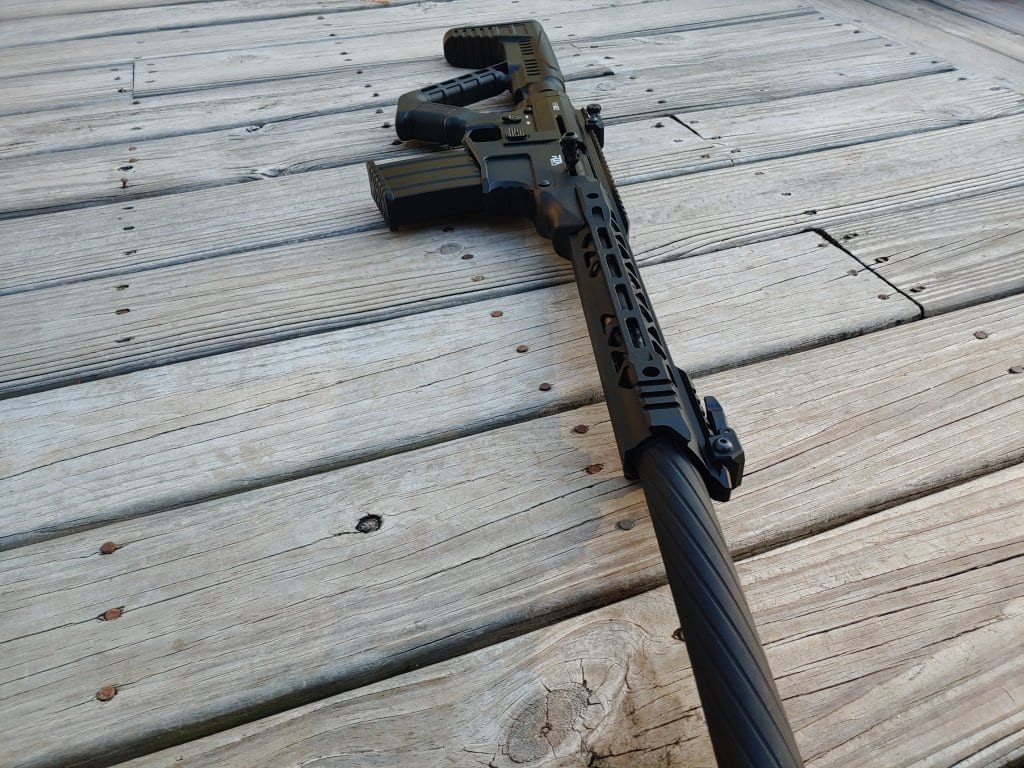 Another major difference is that the lower receiver and rail are metal compared to the polymer forend and lower of the VR 60. What they have in common is they are both magazine fed, semi-auto, gas operated shotguns.

The VR 80 tries very hard to be extremely AR receiver-like. Inside the gun, the guts are much different than an AR’s. The safety mimics an AR 15 and is ambidextrous. The safety clicks into place in a very tactile manner. It’s a big improvement over the VR 60. The magazine release is positioned in the same position as a AR 15 and is massive. You can easily reach it and the extra size gives you more leverage to eject the massive 12 gauge magazine.

The bolt release is also placed in the same area as an AR 15 and is massive as well. Very easy to hit when reloading. The charging handle is on the bolt and reciprocates so it’s more AK than AR. However, the charging handle can swap between left and right-handed use. It’s very easy to swap it back and forth.

The thinner handguard is more comfortable to the hand and it’s easy to add different accessories and place them where needed.  Sadly, the bottom of the rail lacks M-LOK slots, which is an odd choice to be sure.

The barrel extended beyond the rail and has a barrel shroud that resembles a suppressor. This is removable, but it just reveals a shotgun barrel. The stock and pistol grip is a thumb-hole design and, as far as thumb-hole designs go, this one isn’t bad. It’s not perfect, but it works and provides sufficient grip and LOP for me. However, it can be fixed.

The VR 80’s stock and pistol grip are both removable. A few screws make it easy to slide the entire thumbhole and pistol grip off. This reveals a standard AR carbine buffer tube and a slot to install a normal AR 15 pistol grip. Getting rid of an ugly thumbhole stock and the pistol grip is very simple. Although you should probably look at 922R import regulations and consider these factors before you make changes. I’m not a lawyer and I’m not gonna drop legal advice. The same goes for using larger magazines; you’ll have to comply with 922R by law.

Range Time With the VR 80

The VR 80 is a very easy handling gun overall. Loading the magazines isn’t hard and the only issue is the rim and each round getting caught on the other. When you try to slide the round in, it tends to get caught up on the rim of the round before it. The metal mags are the exact same as those of the older VR series and are backward compatible. The gun comes with two five round magazines, and capacities go up to apparently 9 rounds. That being said it seems hit or miss when it comes to finding 9 rounders.

The VR 80 is a big gun. The barrel is 20 inches long and the overall length is 40 inches. The gun weighs 8.27 pounds but is quite balanced. The gun uses Beretta/Benelli chokes so you can easily find a choke for every use. It comes with three chokes for cylinder, full and modified.

The flip up sights are very AR like and to me the small peep sight is too small. It’s a shotgun, not a rifle. I’d prefer to see a large peep and then a standard square open sight. If you were enterprising enough, a Dremel could make that work for you. Of course the flat top upper is prime for an optic and a red dot on a shotgun rules.

Don’t believe me? Set up a shot timer with 5 rounds and 5 targets and keep trying to break your best record. You’ll chew through a few hundred rounds of shotgun ammo pretty quickly. After my first day, I had a solid bruise on my shoulder.

I ran a hundred rounds of Fiochhi high-velocity hunting birdshot at first, to get the gun running nice and hot. This high brass ammo cycled perfectly.

Next was two hundred rounds of Federal Wal Mart special birdshot. This low powered, low brass ammo is my chosen round for plinking. If a semi-auto shotty can’t cycle this ammo, it’s hard for me to recommend it. Sure, its the least important ammo for the gun to cycle, but its the ammo I’m going to shoot most.

After that, I launched 50 rounds of Olin Corporation military buckshot. It also ran like an absolute champ through the gun. This stuff is relatively hot, at least compared to birdshot so I didn’t expect issues and I didn’t have any.

Admittedly the gun is gas operated, and to run reliably with lowered birdshot it needs to use a lot of gas. This means you’ll feel a little more recoil, but it’s never uncomfortable. It’s slightly over gassed to keep the gun reliable. I never felt actual pain, but the bruise was there. The gun’s muzzle rise isn’t bad at all and it hardly moves when being shot. It’s actually easy enough to handle this gun with one arm.

Reloading the gun is intuitive, but don’t expect the magazine to drop free. You’ll have to rip it out and put the fresh reload in. The magazines function very well and feed both 2 3/4 quarter and 3-inch rounds without issue. The metal magazines are very well built and seem to be pretty bomb proof.

The VR 80 is a really fun semi-auto shotgun. It’s reliable and frustration free. The ergos are a pretty easy transition from the AR to this shotgun. The gun is perfect as a fun gun, or even a competition gun on a budget. The 5 round magazine also makes it hunting legal in most states. Lastly, the MSRP is $699, which makes it affordable for a mag-fed semi-auto shotgun. The VR 80 is an outstanding and fun gun, so be sure to give a peak.