If you were to select a handgun to have with you on the worst day of your life what would it be? The most direct answer is some form of a polymer double-stack 9mm handgun like those from Glock, Sig Sauer, and other reputable manufacturers. 9mm Luger is easy to find, easy to shoot, and it’s a fair cartridge ballistically. Pistols chambered for it are prolific, with spare parts and magazines easy to come by. In my own case, however, (and with a few caveats), the S&W 686 Plus revolver chambered in .357 Magnum is my choice.

The .357 Magnum has been with us since 1935 and Colt and Smith & Wesson revolvers chambered in that round were preferred fight stoppers in law enforcement and handgun hunting circles for decades. When Smith & Wesson introduced their Model 686 in 1981 and billed it as the Distinguished Combat Magnum, that moniker was not hyperbole.

The 686 is an all stainless steel six-shot double-action revolver with a fully under-lugged barrel. It’s built on Smith’s L-frame—a beefed-up version of their 38 caliber K-frame—that could handle the needs of law enforcement and competition shooters who, by this time, were favoring Magnum loads. But times were changing in the 1980s. Law enforcement circles moved toward 9mm and 40 S&W autoloading pistols that had a greater capacity than the six-rounds found in a typical revolver and could be reloaded more quickly in a fight. The .357 Magnum revolver clung on in an era in which autoloaders left something to be desired in terms of reliability and power, but in the years since, autoloaders and the ammunition available for them have come a long way.

Change as time might, there are still some things a quality revolver can do that even the best autoloaders cannot. Those that are most important to me are that I need a handgun powerful enough to take down wildlife in my neck of the woods, should it be called for, but be insensitive to different power levels of ammunition that I can tailor to a given task. Despite all the advances in semi-auto cartridges, the 9mm Luger is not equal to the .357 Magnum—a round that historically has taken animals as large as Alaskan brown bears and walruses.  Even the much espoused 10mm Auto can’t be maxed out quite as much as the Magnum. On the other hand, the .357 can be loaded with less-powerful, but proven 38 Special ammunition for less recoil, blast, and performance where Magnum power would be a liability.

Another aspect of a good .357 Magnum handgun that may be overlooked is how inconspicuous they are on the market today. Revolvers and the different types of ammunition might still be available when more popular options are not. During the COVID-19 pandemic, more popular offerings all but dried up in my area. My local shop could not keep Sigs, Glocks, or even Taurus pistols in stock for a time and all that I could browse was a case of unwanted rimfire pistols and revolvers. Although my idea of a medium-frame—not too big, not too small—is somewhat smaller than what is out there, I could not pass up on a three-inch barreled S&W 686 Plus.

The 686 Plus model is, by no means, a new gun.  It simply designates the model that holds seven rounds of .357 Magnum or 38 Special ammunition instead of six. The S&W 686 Plus is available in a variety of barrel lengths from 2 1/2 inch concealed carry models to an 8 3/8 inch version that would make for a dedicated hunting pistol. I opted for a 3-inch barreled model for a compact carry package without sacrificing too much velocity by going for the shortest barrel length.

Additionally, the Plus model comes with a round butt to make the revolver a bit more concealable—although you could not tell with the stock over-molded factory grips. Those grips give a commanding all-finger grip, but they are large and tend to break if overtightened—which I did. I ordered and modified a pair of Altamont boot grips that not only look good but make the revolver a little easier to conceal.

Still, the 686 does not scream ease of carry. It is an all stainless steel handgun that tips the scales at 36.2 ounces fully loaded. Topside, the 686 looks quite thin until it comes to the cylinder width that I miked at 1.54 inches in diameter. The chunky Glock 19’s slide mikes in at 1 inch flat. The 686+ cylinder might hold extra rounds over other revolvers, but in the wrong position of carry, it makes lugging this chunk of iron a chore.

Otherwise, the S&W 686 Plus is a conventional double-action/single-action revolver that can be fired by pulling the trigger all the way through or by cocking the large knurled target hammer for a light trigger pull. Out of the box, the double-action pull is smooth but heavy, breaking at about nine pounds on my Lyman trigger scale. The single-action pull has a little bit of overtravel but breaks cleanly at three and a half pounds.

This three-inch model, in particular, is the smallest version to use a full-length ejector rod that will knock the most stubborn of cases free after firing. Overall, this version of the 686 may be the best all-around version that balances ballistics, handling, and concealability.

The small Smith & Wesson five-shot J-frame dominates the revolver accessory market and it can be tough to find all you need at a big-box store. Grips for any Smith & Wesson K-frame or L-frame with a round butt profile will fit the 686. Speedloader and holster options are a bit more tricky. Speedloaders are not required to operate the gun but it is not a bad idea to practice for rapid reloads in the rare event that seven rounds fired is not enough. Most reliable options are made for the six-shot 686, not the seven. But HKS 587 loaders are proven and prolific.

Unlike with grips, the visibly taller L-frame 686 won’t fit a typical fitted K-frame holster. 1791 Gunleather makes a fine holster, though I ultimately ran an Azula leather holster and an MK-Tec Kydex IWB. Both worked out well.

Shooting it is just as straightforward. I started by shooting the revolver in single-action from the bench with a large target set at 15 yards with LAX 38 Special 158-grain FMJ ammunition. Recoil was nonexistent and so was noise. I followed it up with two of my favorite loads—Federal 38 Special+P 158 grain lead hollowpoints and Federal American Eagle .357 Magnum 158 grain jacketed soft points. All hit the point of aim for me and I moved my target out to 25 yards to check my results.

The Federal 38 Special load produced a bit more blast but virtually no recoil. At that distance, I could coax seven rounds into a four-inch pattern. The old school 357 soft point loads gave me groups that ran around three inches consistently. That load gave a mild pinch to the palm and enough blast to wake me up but I never came close to losing control of the gun.

Picking Up The Pace 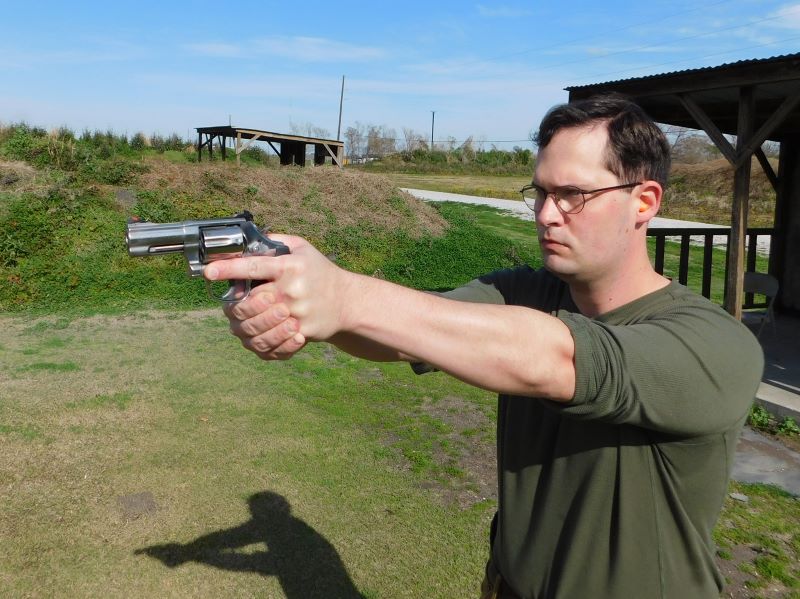 Most of my shooting was much closer, at 7-15 yards with different types of 38 Special and .357 Magnum ammo, although I occasionally backed up to 35 yards—the furthest my pistol range can go—and I could lob rounds into 8-inch steel plates with near-boring regularity, especially in single action. Shooting the gun is a little more challenging, given the longer heavier pull. But the weight of the 686 helps to keep the gun level.

Further, the 686’s leaf mainspring allows for both a smooth pull and a trigger that got much lighter over time. Within a few hundred rounds of 38 Special, the double-action pull was a much more manageable six-and-a-half pounds.  I never felt I was fighting to pull the trigger but with an above-average-sized hand, getting leverage on the trigger while maintaining my grip was easy. But I could see how a smaller-handed shooter might have better luck with a smaller-framed handgun.

I could crank off any kind of 38 Special ammunition in double-action without disturbing the sights. The 686’s added weight soaked up any recoil and it was easy to make target-to-target transitions that I simply can’t do well with my little J-frames.

Most Magnum loads required a bit more concentration to keep the gun on target after each shot, but it was not an active fight until I tried some HSM 180 grain hard-cast bear loads that broke my grip slightly with subsequent shots.

While rapid reloading may not be the revolver’s strong suit, the 686 is a surprisingly easy setup. Opening the cylinder and smacking the ejector rod clears all the empty cases. Unlike the factory grips on some revolvers, the ones on the 686 did not interfere or pinch when inserting a speed loader. I used a few defective HKS loaders that hung onto rounds even after twisting the release knob, but the gun never got in the way. After throwing out the defective units and plenty of dummy-round practice, I could reload the 686 in about four seconds.

The S&W 686 Plus probably won’t satisfy a more gadget-oriented shooter. Nailing down the holster and reloading setup can be tricky. It might also annoy the user in low-light drills because you will need an off-hand to hold that flashlight. A good 9mm pistol has its own flexibility by the sheer assortment of stuff you can hang off it.

But a .357 Magnum has a flexibility all its own and after two years of carry and fifteen hundred rounds downrange, I consider the three-inch 686+ to be about the best configuration. It is a jack-of-all-trades and a master of none. It sacrifices some capabilities for ammo flexibility that puts it equally at-home in the home, on the belt, and in the woods. With a good set of stocks, this version is compact enough to carry but still weighty enough to shoot Magnum loads without the pain in the hand. Even in 2022, a good .357—and the 686 in particular—is still a solid all-around option.