Before the Hellcat Pro, the Hellcat somehow became controversial. To add to the controversy, it wasn’t controversial for everyone. Some people swooned over the concealed carry gun and fell in love faster than a pubescent boy on his first date. But others looked more askance at it and weren’t so quick to blurt out, “I love you.”

Apparently, Springfield heard the criticism and has been making steady improvements to the Hellcat line ever since, starting with the Hellcat RDP and now culminating in the Hellcat Pro. In my opinion, and the opinions of many others, the Hellcat Pro might be the closest to perfection Springfield has ever gotten to a concealed carry gun that is easy to shoot, holds enough rounds, and stows away with minimal, if any, printing issue. So let’s start with the basics and work our way from there.

Shortly after Sig Sauer brought out the P365 and challenged the gun world to top their previously unheard of 10-round flush fit magazines in a 1-inch-wide concealable package, the rest of the industry stood up and took notice. The P365’s debut at SHOT Show 2018 saw a packed Sig booth with everyone swooning over this new micro miracle and the competition standing back, scratching their heads about how Sig did it.

But they didn’t scratch their heads for long. Once the show was over, they pulled out their slide rules, licked their freshly sharpened pencils, and got to work. The competition naturally heated up, and the likes of Mossberg (who capitalized on the opportunity to reenter the pistol world with their MC2) and Springfield brought out their Sig-killers, hoping to stake their claim in the larger-capacity CCW market. Soon, we saw 11-, 13-, and 15-round mags sneaking into the concealed carry world, most of them small enough to still hide the gun extremely well. Even Taurus got into the mix with their 11-round GX4, while Smith & Wesson modified their existing Shield grip to pack in more rounds. Who says gun folks aren’t thinkers? I’d say we’re practically geniuses. Where is our Nobel Prize for Engineering?

Hellcat on the Prowl

Naturally, Springfield joined the fray with the Hellcat. I’ve had the privilege of trying out the entire Hellcat line over the past few years and have always had mixed reactions to the series. It’s not all bad, not all good. I like Springfield as a whole—they seem to put out good quality designs despite being based in Illinois—but I’m far from a Springfield super fan. Their line of pistols and rifles has many solid offerings, many of which are fun to shoot, reliable, and easy to operate.

The original Hellcat was an exception, however. I found it too snappy, with too short of a grip, making recoil more difficult to manage, hardly a great feeling when your life depends on it. In all fairness, this is common among small guns—and the smaller the gun, the worse it is. But Springfield could have done more to improve the experience.

All of my criticism of the Hellcat series changed, however, with the introduction of the Pro, a gun so different in feel and function from the original that the only thing tying it back to the Hellcat 1.0 is the aesthetic. It still looks like a Hellcat. But it shoots like a bigger gun.

After the original Hellcat came the Hellcat RDP, where Springfield began to address many of the complaints of the first model. The RDP featured an upgraded trigger (apparently, I wasn’t the only complainer), an optic plate and optic on top, and a compensator onto the nose. The optic upgrade was smart and welcome, an obvious good move. I thought the comp would be gimmicky until I shot it and discovered it did serve more of a purpose than I originally thought. And because it required a threaded barrel, it suddenly became a great platform to add a suppressor. Kudos to Springfield for that one. 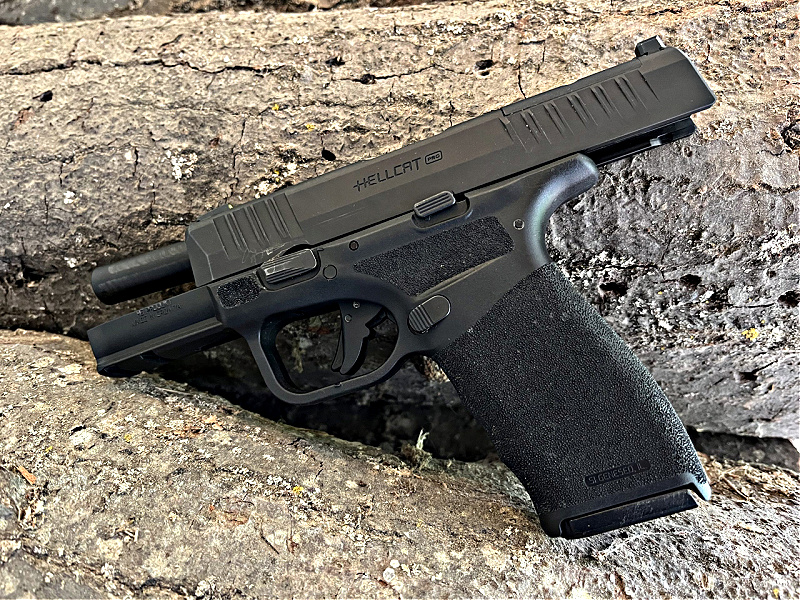 The upgraded Hellcat RDP has a new trigger, optic plate, and a compensator on the nose. But I was still a bit underwhelmed. The grip was still too small, continuing the snappiness and difficult recoil management.

Overall, the Hellcat Pro is a vast improvement over previous Hellcat models. Many common complaints about the older models have been addressed and fixed, namely the gun’s grip length and overall shootability.

Spoiler Alert: The rest of the article has a lot of great things to say about the Hellcat Pro.

Besides the overall size, my other biggest complaint about the original and RDP that I shared with many other folks was the trigger. It just wasn’t very good. It was squishy, un-crisp (today, that’s a word), and had a sloppy reset compared to the competition. As a result, many Hellcat owners I know upgraded to aftermarket triggers shortly after purchasing the gun.

The Pro trigger, on the other hand, is sweet. The break is still a bit far back, but it’s consistent, crisp, and solid. While not a superlight trigger, it feels more premium, like something you might find on a pricier firearm. The reset is solid, sure, and easy to shoot from. The improved curvature feels great on the finger.

One area that Springfield got right from the start of the Hellcat series is the Adaptive Grip Texture. It’s nearly perfect. The Pro carries this over from the rest of the Hellcat line, a feature worth passing along to future versions. The Adaptive Grip Texture works by alternating tall and short, thick and thin peaks and valleys that engage your palm differently depending on how hard you squeeze.

It’s a great mix of not too rough but rough enough to hold the gun firmly with sweaty palms, something you will likely find yourself fighting if you ever have to use your gun in self-defense. It’s good to know the grips won’t tend to slip under stress.

The sights are a tritium/luminescent front and a white-bordered U-notch rear that work exceptionally well together. Both are easy to pick up and align from the draw. This is one feature I’ve always liked about the Hellcat series. Instead of more traditional rear dots or a box, the U in the back makes front and rear alignment a cinch. The rear sight body is also squared off for easy belt or boot rack on one-handed reloads.

Are you a red dot shooter? Springfield has you covered. The Hellcat Pro comes with an optic cut slide that accepts Springfield’s proprietary Hex Wasp dot and a range of other small pistol dots. My trial version didn’t come with a red dot, but I had shot the Wasp on the RDP for a previous review and found it easy to zero and simple to use. The sights on the Hellcat Pro do not co-witness with the dot, but not everyone likes that, so I doubt it will turn off many buyers.

The real catalyst for the Hellcat series was to stuff more rounds into a smaller gun, something they did from the start. And then they went bigger from the original 11-rounder to a 13-rounder and eventually to a 15-rounder. The problem with the larger mags was they stuck out of the bottom of the grip, removing some of the concealability.

But unlike the previous models, the 15-round Hellcat Pro magazines are flush fit, thanks to a longer grip than the standard Hellcat or RDP version, finally making the Hellcat fun to shoot because it feels like a full-size gun in the hand. If you have any legacy 15-rounders from your existing Hellcat, they will work in the Pro if you take the rubber fit gaskets off. Smart engineering on Springfield’s part. I wish all gunmakers operated like this.

Springfield listened to customer feedback and improved the Hellcat line with the introduction of the Pro. It addresses many of the common complaints and fixes issues from previous models. So, if you’ve complained about older Hellcats as I have, give this one a shot (pun fully intended). I’m still not a huge Springfield fan, but this gun might find its way into my permanent collection.

At $634 MSRP, the Hellcat Pro stands up nicely against the Sig P365, S&W Shield Plus, and similar small carry guns with larger capacities. So it boils down to personal preference. It’s worth serious consideration.

The M-1 Garand— A Venerable Warrior