I guess the best way to sell a game is to make it free. Or at least make a heavy portion of it free. The Epic Games produced Fortnite has become a worldwide sensation with its Battle Royale mode stranding you on a massive island with a killer storm making your battleground smaller and smaller. You can do a lot of things in these games, build, mine, destroy and of course shoot everything that moves. Fortnite combines both real world and fantasy weapons to give players a constantly changing line up of firearms to dispense extreme prejudice with. If I could I’d show you the fantasy weapons and their real-world counterparts. Instead, I’m going to show you the real guns of Fortnite. There are a few guns that are seemingly mishmashes of other weapons and we’ll touch on those as well. 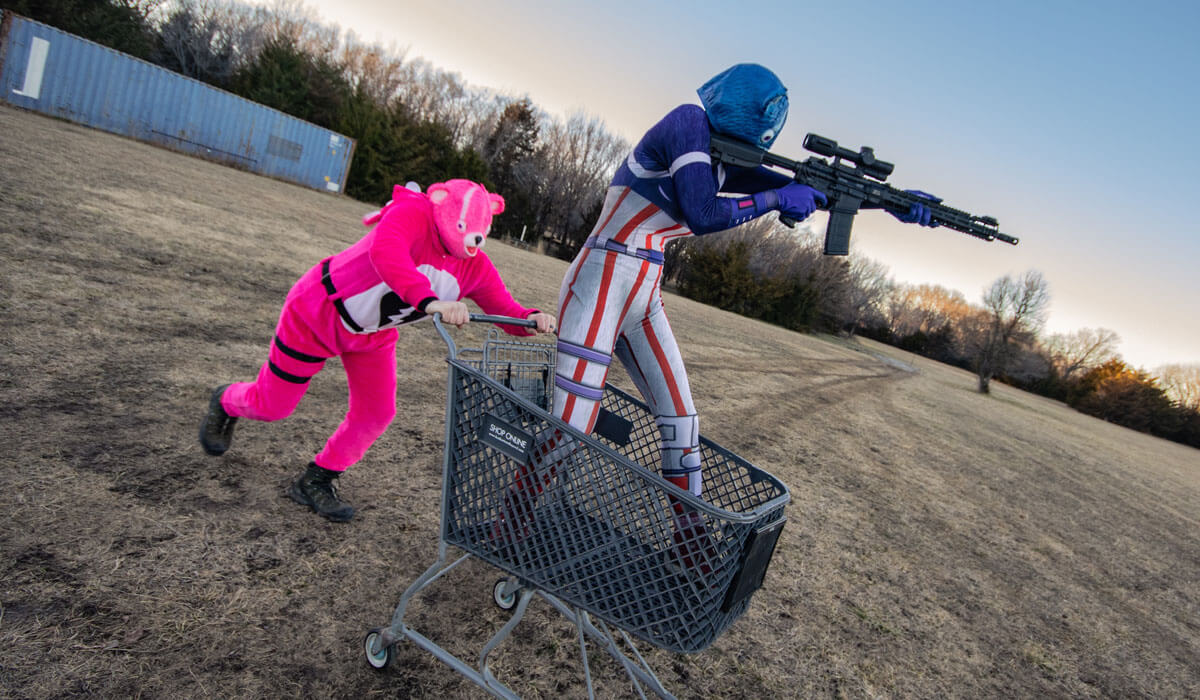 The Desert Eagle is a staple to the movie and video game industry, it’s a gun so crazy you don’t even need to modify or stylize it. The Hand cannon is one of the most powerful guns of Fortnite, but the tradeoff is relatively short range and high recoil.

This somewhat mimics the real life Desert Eagle, depending on caliber anyway. I’ve found the 357 Magnum variant downright pleasant to shoot. This particular model sports the factory compensator that gives the gun its shark-like appearance. 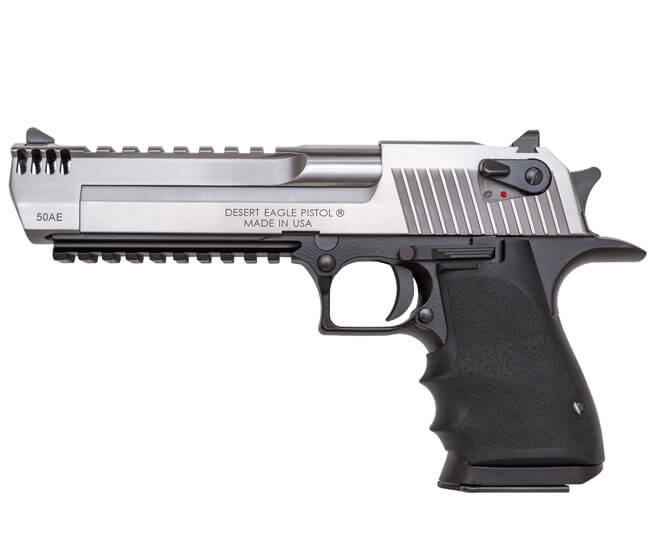 The Quickfire Pistol
Looking carefully at the gun it appears to be some monstrosity based on the CZ 75. The closest thing to a CZ 75 Monstrosity would be the Witness Polymer Full-Size guns from EAA. These polymer frame guns are nowhere near as graceful as the CZ 75. 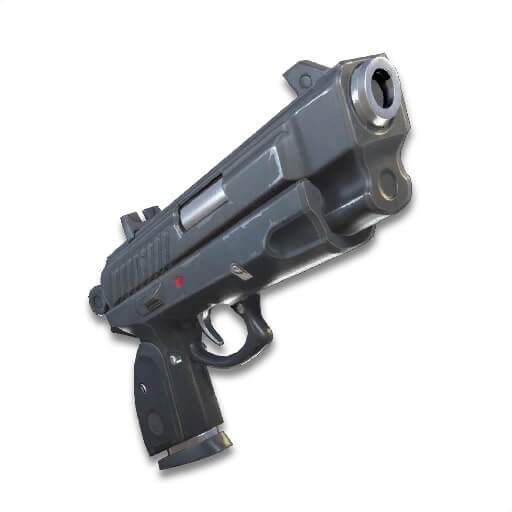 The Quickfire pistol does live up to the CZ 75’s low muzzle rise, recoil, and excellent single action trigger. That all results in a very easy to rapid fire weapon. The Quickfire pistol fires as fast as you can pull the trigger and delivers relatively low recoil and low damage. 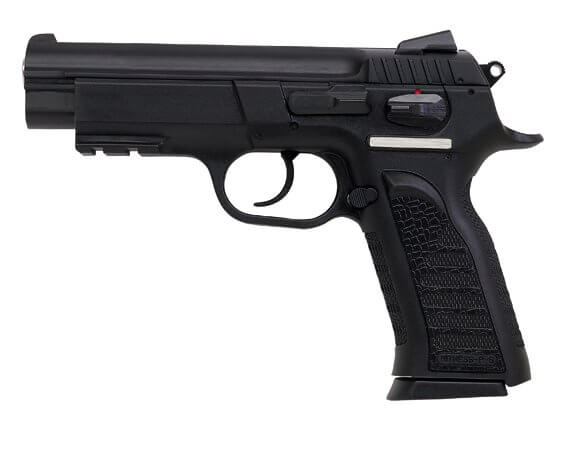 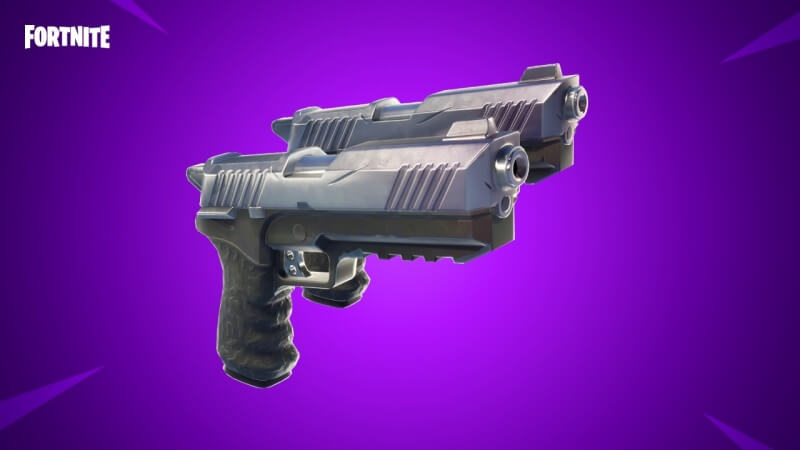 The HK P30 is one of my favorite DA/SA guns and is the choice of John Wick in the first movie, as well as countless HK fanboys. These fun guns in game double your firepower and do excellent damage on top of a decent reload speed. 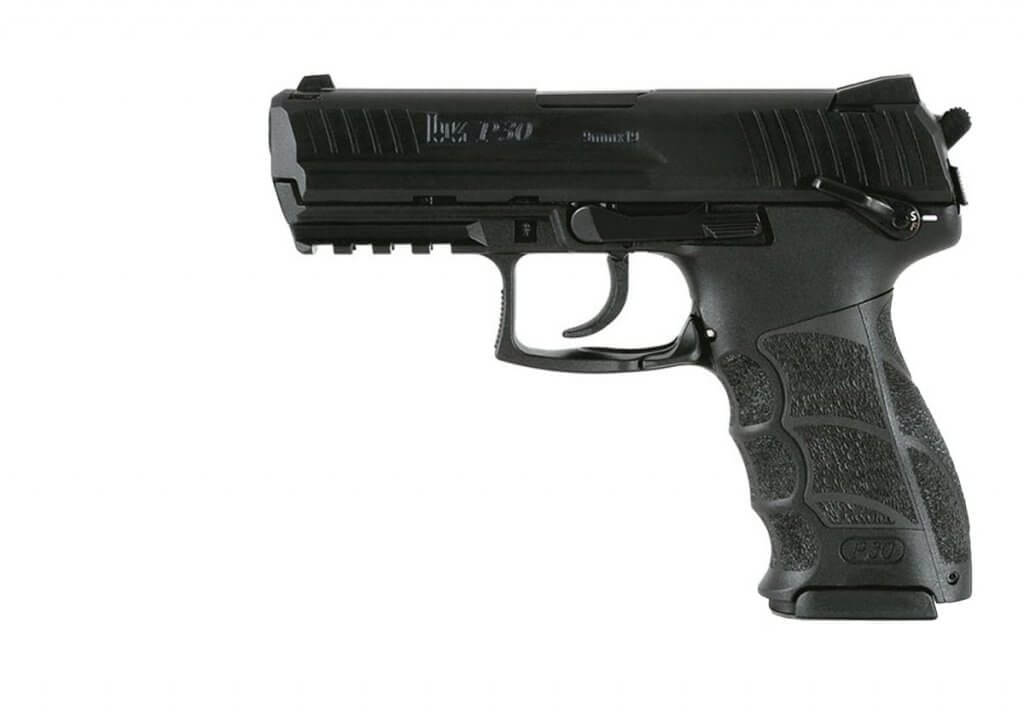 The SMGs of Fortnite

Compact SMG
Can any video game out there not include the P90? No guns of Fortnite list would be complete with the generically named compact SMG. This is clearly a P90 that looks like its been slightly compressed. The P90 is odd looking enough not to need much modification. This gun rocks 50 rounds and a high fire rate. It can be devastating in close quarters combat due to its low recoil and decent damage. It’s a fun gun, and when used inside its role it’s hard to beat. Plus its a P90! Haven’t you guys watched Stargate?

Drum Gun
My favorite gun in Fortnite has nothing to do with performance, but everything to do with cool factor. The Drum gun is an aptly described Thompson submachine gun that feeds from a 50 round drum. It is one of the best SMGs, and it does well up when it comes to mid-range combat. 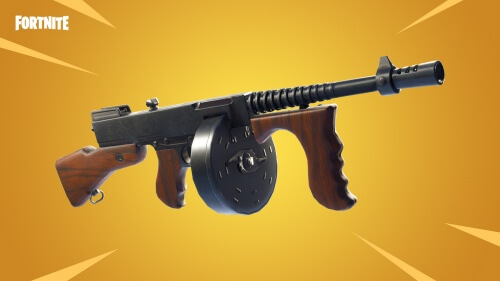 The gun spews bullets and is a blast to use. Recoil is relatively low, and the gun gives you that classic look and appeal. It’s a little outdated compared to most of the guns of Fortnite, but it gets the job done. 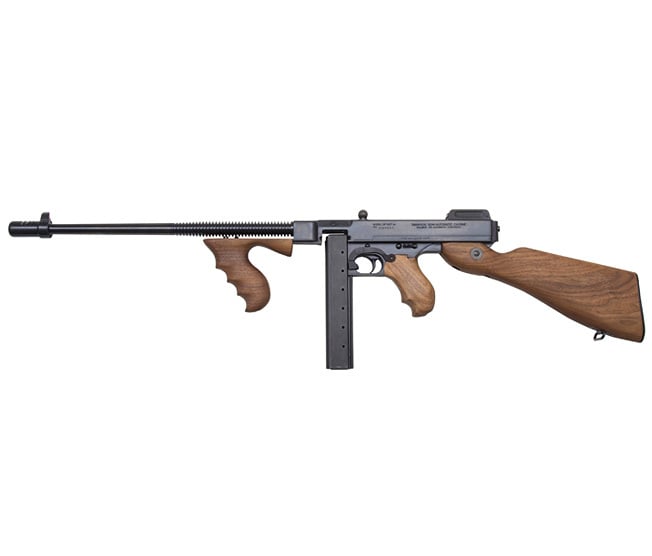 The Submachine Gun
Another favorite and legendary gun in movies, video games, and even real life is the MP5. In Fortnite its known as the generically named the Submachine gun. It comes in two types the standard and a suppressed model that is a mock-up of the MP5SD. The gun itself is pretty average all around with low recoil, a decent reload, and fast firing rate. Damage is standard, with the Suppressed model oddly doing more damage overall. One of my favorite little touches is the selector markings being made of a series of bullets much like a real MP5. 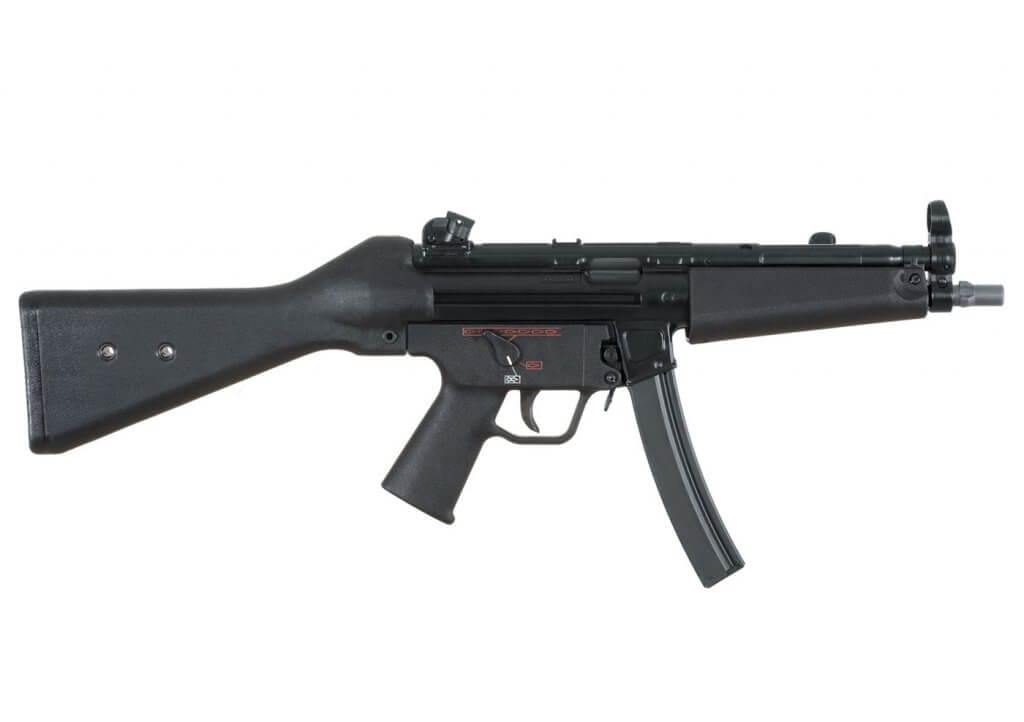 The Shotguns of Fortnite

Double Barrel Shotgun
Generically named run the world when it comes to the guns of Fortnite. However, this is likely the most generic of firearms. The double barrel shotgun isn’t a fantasy gun but its also really hard to distinguish it as one particular model.

It’s a generic gun that really could be any of the dozens of mass-produced firearms in the early 20th century. This is a sawn-off model with very short barrels. It has a very short range but offers substantial damage. Its short range and low capacity do make accuracy highly important when using the gun.

Pump Shotgun
My sons favorite gun is the pump shotgun, and in my opinion, this shows he has fantastic taste in firearms at a young age. The pump shotgun is modeled after the Mossberg 500, and we can tell this according to the tang safety at the rear of the receiver.

This is the field model with its ribbed barrel. In the game its quite powerful and sports great damage at close range. The pump shotgun is a great starting gun and is well suited for beginners who don’t quite have the twitch skills necessary to use more direct fire guns.

The Rifles of Fortnite

A… Rifle (we have to be careful about writing that phrase, so excuse the obfuscation. You know what it is called)
The M4 is one of the most well made and popular rifles in the world, and its no mystery why it gained the generic A… Rifle name in Fortnite.

There are several variants when it comes to the guns of Fortnite. There is a generic model with polymer handguards and iron sights, and other AR-15 Parts, and then there is the Thermal Scoped Rifle that lends itself more to the modern Colt M4A1 SOPMOD with an odd side charging handle.

These rifles have excellent range, potent concerning damage and have a rock solid fire rate. These are great beginner’s guns in Fortnite due to their strong all-around stats.

A… Rifle 2
Again the guns of Fortnite and generic names go hand in hand. Besides the M4 as an a… rifle, the high-end a… rifle is the SCAR L.

This higher tiered a… rifle is better in every way than the original. It’s more accurate, deals heavier damage and reloads a hair faster than the standard M4 a… rifle. The SCAR L in Fortnite is a pretty accurate representation down to the Ugg boot stock. This rifle is often very hard to find, but when found its quite potent and capable in the right hands. Burst A… Rifle 1
One of the most common rifles in the game is the burst a… rifle, and when I first started playing Fortnite this seemed to be the only gun I could ever find outside of the automatic handgun and the pump action shotgun. It isn’t my favorite gun in this guns of Fortnite list but I feel quite comfortable with it.

Obviously, it fires in three shot bursts. This gun is modeled after several different types of the AK with touches from a variety of other guns. It’s not perfect, but if you get one early in the game you’ll be well prepared for a variety of situations.

Burst A… Rifle 2
The Burst A… Rifle is modeled after the futuristic looking French FAMAS rifle. As its name implies, the rifle fires in three round bursts and the bursts fire quite rapidly. 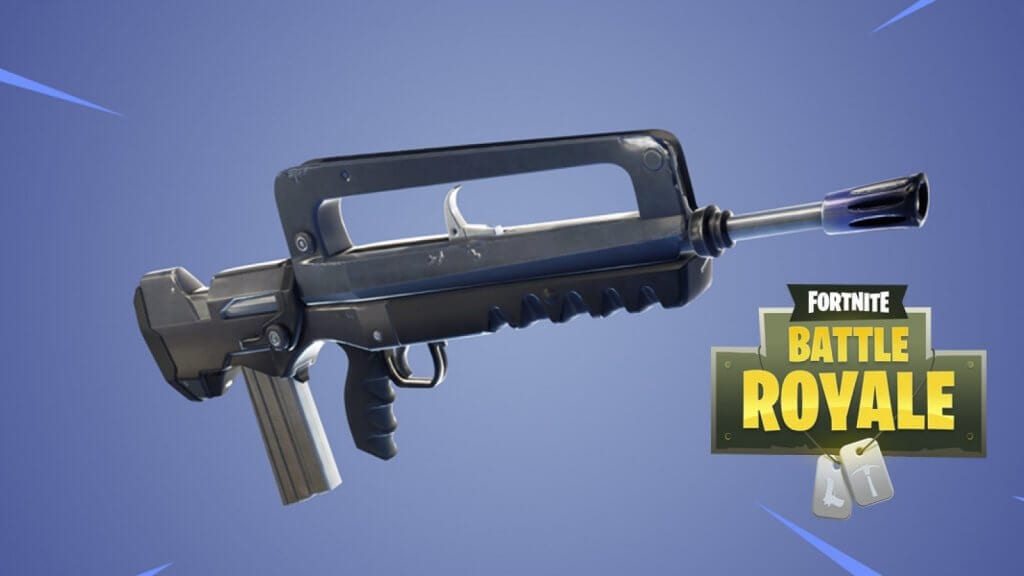 If you learn to work the trigger correctly its very easy to make the gun sing across the battlefield. It’s accurate, relatively low recoiling and deals decent damage. The FAMAS rifle in real life has a three-round burst setting as well as a full auto setting and does have a very high firing rate.

Light Machine Gun
The light machine gun is an awesome and fun little weapon that I rarely seem to find. It’s a big, heavy gun that blasts through drums like a champ. It’s DPS is quite high and as its fire rate reload time. The LMG is a bit recoil heavy, but its a powerhouse. The LMG is based on the FN Minimi and its many variants including the M249 SAW, and the MK46. It sports a bipod that’s not usable, has the barrel carrying handle, and even the stock is accurate to the Minimi series of guns. The MiniGun
This particular MiniGun is both a work of fiction and a real gun. The fictional aspect is that it’s man-portable, the real aspect is the fact it is a minigun. Miniguns are quite real and quite potent. The Minigun in Fortnite does allow you to live out your Jesse Ventura Predator fantasies or perhaps your Terminator 2 fantasies. In the game it’s an ammo spewing monster that can decimate both players and whatever they build. This is just the guns I could identify in my time with Fortnite. I’ve enjoyed the game, especially since the best part of it is free.

This is a long list but there are even more guns than this, but these are the models I can clearly identify. Not only that but with Season six just dropping I imagine the guns of Fortnite are only going to grow in selection. Have I missed any? Let me know below.

4 thoughts on “The Guns Of Fortnite – An Inside Look”