Did you know that the United States considered adopting the FAL as its main battle rifle? Well, they did (hence the T48 rifle and “Salvo” Project), and now you do — and that’s what we’ll be discussing in today’s installment of Throwback Thursday. 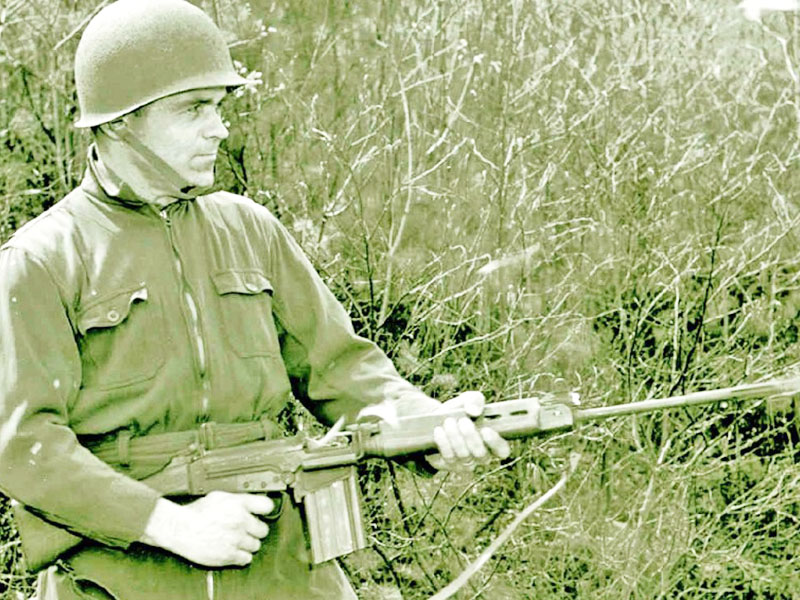 After World War II, many countries were looking to upgrade their small arms. The US was one of the countries. While the M1 Garand was a fine rifle during the war, there were a variety of improvements that could be made to increase its efficiency.

It is said that a handshake agreement between President D. Eisenhower and Prime Minister W. Churchill led to NATO adoption of the US preferred 7.62×51 cartridge. In exchange, the US would adopt the FAL as its main battle rifle.

History tells us that the US instead adopted the M14 and later the M16. So what happened to the US consideration of the FAL?

The US military did consider the FAL. After several earlier variants, the US made the T48: a FAL pattern rifle made under license from FN. By most accounts, this was a very good rifle. However, it went up against the T44 in trials. The T44 was an M1 variant that would eventually become the M14. Ultimately the T44 won the trials, though the testing was not without controversy.

An interesting aside is that the T48 was eventually influential in the development of the 5.56 NATO round. Through an experimental process called Project Salvo, small caliber weapons were tested. One of those was the Winchester Salvo rifle — a gun built on two T48 receivers.

The Salvo rifle had two barrels, one for each T48 receiver. The gun fired a special 5.56 T65 duplex round: a load that had two .22 caliber projectiles fit into a necked down .308 case. So, with each pull of the trigger, four bullets would fly toward the enemy. The gun did better than I would have expected, but it never made it out of testing. But, it did help shape the eventual development of the 5.56 round we know today.

Even though the FAL never made it into US military service in a meaningful way, it nevertheless made a huge impact on world affairs. In fact, the gun has been called the “Right Arm of Freedom” because it often faced off against regimes armed with the AKM and backed by the Soviet Union.

Here in the US, the FAL has always been a popular rifle for civilian ownership. There are a number of companies that specialize in FAL builds and parts. For example, DS Arms is recognized by many as one of the top makers of metric pattern FAL rifles in the world today.

Not only does the company make a complete line of rifles, but DS Arms also makes SA58 magazines, barrels, replacement parts, and more.

If you have an interest in the FAL, you really should check out their rifles.