Like many, I think it’s silly to see people carrying M1911 pistols in a day and age where guns like the Sig P365 exist. Yet, here I am with a P210 Carry model. I love the classic Sig P210, but when I saw the Carry model, I didn’t exactly jump for joy. Then I held and shot it at PSA’s Gathering event and instantly became a fan. I reached out to Sig, and they happily offered to send a loaner model. 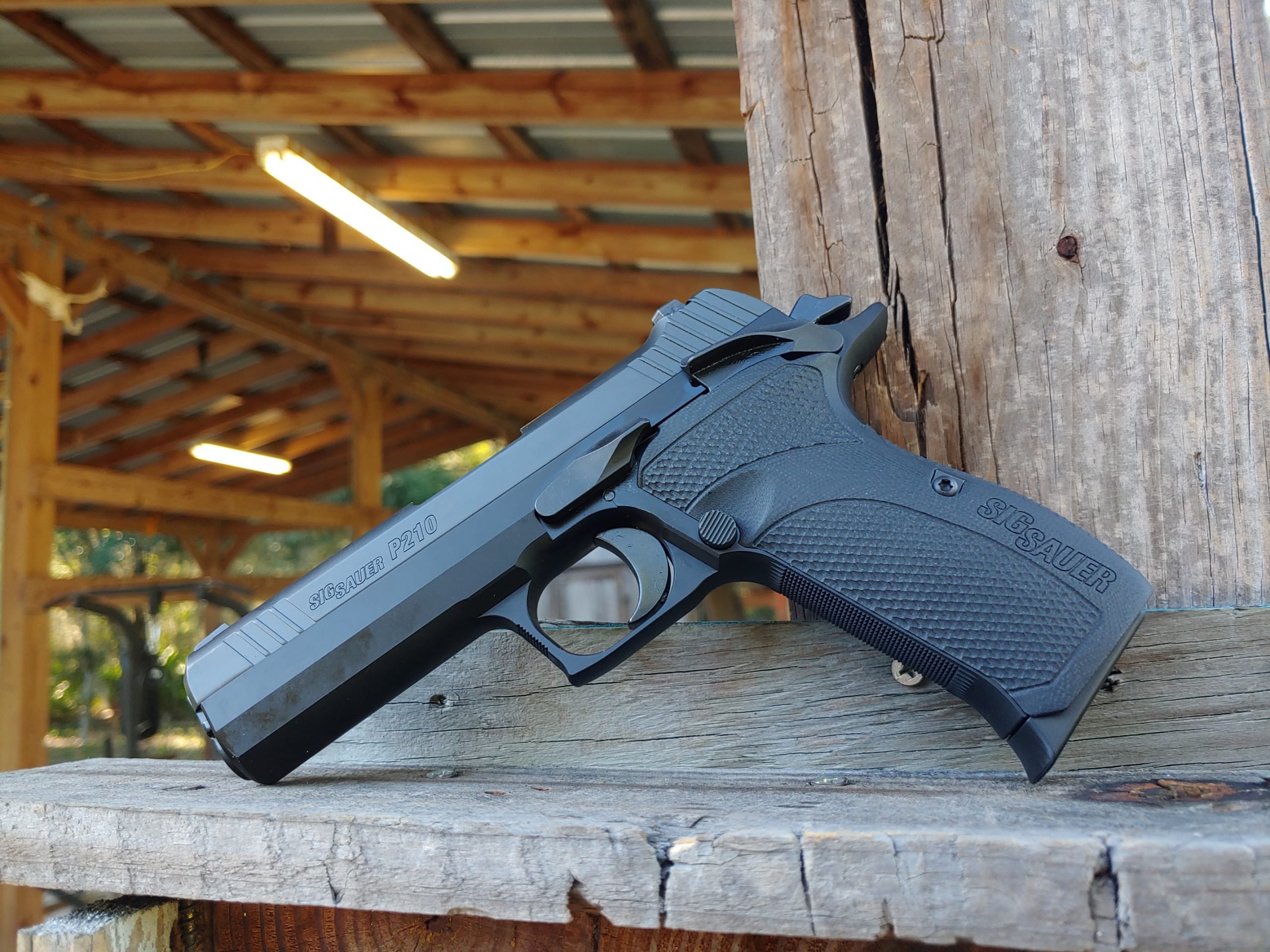 The Sig P210 seems silly on paper. Much like the old M1911, it’s an old, heavy warhorse that’s not exactly efficient in this day and age. The P210 Carry is a single stack firearm that’s based on the classic Sig P210. The O.G. P210 started life in 1947 and entered service with the Swiss military as the Pistole 49. Shortly after that, it became known as the m/49 in 1949 with the Danish military.

The Sig P210 is derived from Charles Petter’s Modele 1935A pistol and did take some inspiration from the Luger pistol. Sig’s P210 used internal slide rails that kept the slide fairly small but also lowered the bore axis. This same design would be famously used on the CZ 75.

Much like the M1911, the SigP210 served military forces for decades. Over time the weapon went in and out of production, and Sig famously brought the classic P210 back. This was successful, and that likely inspired Sig to produce a more modern version of the P210.

The Sig P210 Classic was a big gun, as were most military pistols at the time. With the name Carry in the title, you expect a little of this and a little of that to be trimmed away. First, Sig trimmed the barrel from 4.7 to 4.1 inches to make it a little smaller.

They then moved to an alloy frame which cut the weight from 37.4 ounces to 29 ounces. Other than those two big changes, the P210 Carry isn’t much smaller than the classic. It’s still 5.63 inches tall, 7.75 inches long, and 1.44 inches wide. Predictably it’s a 9mm gun and uses the same eight-round magazines as the classic P210.

Size wise it’s a little lighter and a little shorter, but Sig also modernized the gun. They add rough G10 grips to provide a good purchase and added big night sights, specifically the SIGLITE night sights. Sig finished it up by adding front slide serrations to round everything out and provide a more modern pistol for the discerning user.

As a Carry Gun

Admittedly this isn’t the world’s most efficient carry gun. It’s big, heavy, and only holds eight rounds. Compared to the modern world of Micro Compacts, it’s not very efficient. This is a carry gun for someone who wants their gun to match their suit. It’s a classy carry gun that’s svelte, thin, and very well made.

I love the micro compact series, and my carry gun is the Sig P365, but these guns are admittedly a little generic. They don’t stand out. They are efficient machines who do one task and do it well. The P210 Carry can be a capable defensive weapon, but it’s also a refined, good-looking weapon if the style is something worth considering with a carry gun.

The P210 Carry is not an ultra-small gun. It fills my hand from top to bottom. The G10 grips are incredibly comfortable and textured nicely for a sure grip. The front and backstrap are also heavily textured. The benefit of a single stack magazine is the svelte grip design that glides into your hand. A big beavertail prevents hammer bite and also allows for a nice high grip on the gun.

The safety is a big massive beast and likely why the gun measures out to almost an inch and a half wide. It gives fancy extended M1911 safeties a run for their money. It’s easy to sweep downward, and you get a nice tactile and audible click when you engage or disengage the safety.

Much like the CZ 75, some will find the slide small, although it’s a fair bit bigger than the pipsqueak CZ slides. I had no problems racking the weapon and even doing so quickly. This is one of the few guns that offers a slide lock placed in a position where my thumbs don’t automatically pin it down. Sig is notorious for this with their P series guns, so it’s nice to see a beefy slide lock on the P210 Carry.

Right off the bat, the P210 delivered amazing accuracy with all my shots landing in the black, with one flyer that was still well in the black. I set up my gongs and backed off from 10 to 15, and even 25 yards. I routinely rang a 6-inch gong in an off-hand position. The big sights are super easy to see and focus on. The single action trigger is to die for.

There is hardly any take-up, and the wall is light and breaks cleanly. It can surprise you. I kept the P210 Carry on target between shots without much challenge. The little 9mm barely barks and is super easy to control. Firing fast and firing accurately are one and the same. The sights settle back down quickly between shots.

I originally intended to shoot around 300 rounds through the P210 Carry but enjoyed it so much that I pushed my ammo budget to 500 rounds. In that 500 rounds, I didn’t have a single issue. It was all Global Ordnance 115-grain brass-cased ammo.

Would I carry it?

When you combine the reliability of the P210 Carry with its accuracy and control, there isn’t a reason I wouldn’t carry it. Well, maybe the price could be a reason. It’s an expensive carry gun. Admittedly I prefer a bit more capacity, and my current setup carries 14 rounds in a package that’s smaller and lighter than the P210 Carry.

Even so, I don’t want to send this gun back to Sig. I want to pair it with a high-end leather holster and wear a suit when I carry it. It’s like the concealed carry version of a BBQ gun, and that’s perfectly fine. I’ll probably attend a Steel Challenge match at the beginning of August, and I might shoot it with the P210 Carry just for fun.