Safariland makes the world’s most widely accepted duty holsters. They aren’t the only game in town, but they are clearly the most dominant force in the duty rig market. Name ten police agencies, and I bet nine of them issue Safariland holsters. They’ve made EDC rigs in the past, but the Schema is different. The Schema is seemingly their first deep carry rig designed for the average person. As much as I love the 557 rigs, it’s no Schema in terms of concealment.

The Safariland Schema is an IWB holster more or less aimed at appendix carry, although nothing is stopping you from wearing it as a strongside IWB rig. Aimed at the micro-compact market, the Schema is available for the Sig P365 and P365XL, the Taurus G2C and G3, the G43, G43X, and Springfield Hellcat.

Safariland sent me one for testing and evaluation prior to the official release, and we’ve been rocking and rolling together. With the embargo finally lifted, I can tell you the pros, cons, and everything in between. 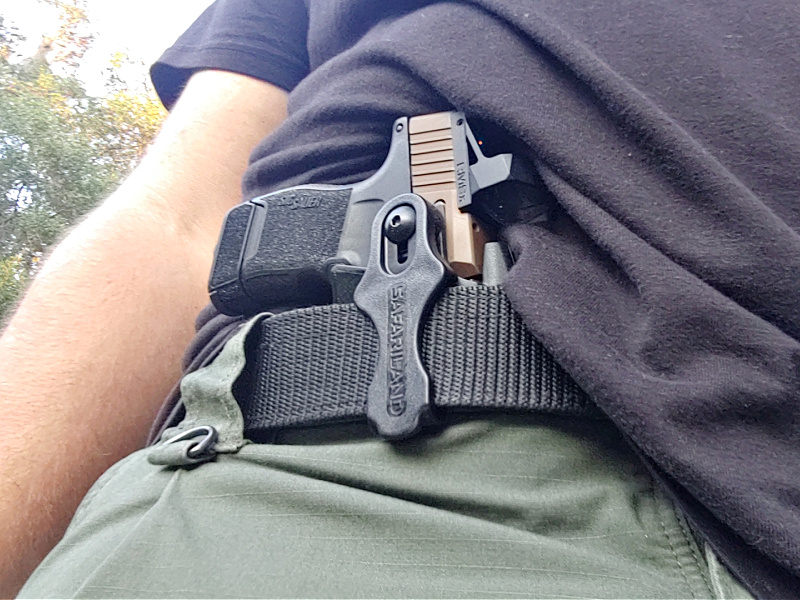 By definition, a Schema is a cognitive framework or concept that helps organize and interpret information. How that applies to a holster, I’m unsure. Framework comes into play because of the holster’s minimalist design. It’s somewhat skeletonized and looks like a framework. That’s about as close as I can relate the word to the holster.

In practical terms, the Schema is a polymer IWB holster designed to be a minimalist rig. The sides have strategic cutouts that deliver a rather distinct appearance. Portions of the slide and frame remain exposed without compromising safety or construction.

It seems like Safariland tried extraordinarily hard to make the Schema as lightweight as possible while maintaining total and complete safety. Previous minimalist rigs often failed to properly cover the trigger, prevented reholstering, and were generally not a great idea for concealed carry.

The Schema is currently only available for right-handed shooters. The holster comes with a wing to enhance concealment and a polymer clip with the ability to add cant to the holster as you see fit. The holster is also red dot compatible and allows you to use your favorite micro-sized red dot.

The Schema — Comfort and Carry

The cant adjustment is quite generous. You could rotate the clip to an extreme degree, and it’s easy to fine-tune your adjustments to get it just right. The provided zero cant position felt comfy to me, but a little ‘negative’ cant is even better. The clip buckles on nice and tight with an overhand that makes the holster cling to your belt.

The minimalist cut of the holster is nice and comfy, without bulging or compromising concealment. It’s just enough holster to cover the gun. I wore it day in and day out when possible and found the Schema to be incredibly comfortable. Right off the bat, I was impressed at how well it fit and how it comfy it was.

Appendix carry can be tricky. It takes a high-end holster to tickle my fancy, and those holsters tend to be expensive. The fact the Schema is super comfy for only 40 bucks is nice. I’ve worn it sitting, driving, walking, and even going to the movies, followed by a day of clothes shopping for the kids.

I’ve yet to feel the pinch, poke, and prod I usually associate with appendix carry. The Schema lets me feel fresh, even when driving for several hours at a time. The lightweight design helps keep your gun belt a bit lighter, and that can be much appreciated.

The Safariland Schema is a low-profile holster that disappears under a shirt and in your pants. I carry a P365XL, and that’s a bit larger than most micro compacts. It still absolutely disappears under nothing more than a light t-shirt. There are no tell-tale lumps or pokes, and the clip is mostly covered by the shirt. The slight wing pushes the rig rearwards to avoid the tell-tale front lump.

One of the few downsides of this holster is the fact it isn’t tuckable. If it was, I would carry it and nothing else. The clip on the Schema looks like it could be removed and replaced, and maybe Safariland or another company will provide a tuckable clip in the future.

My P365XL is currently equipped with a Shield RMSx which has a massive window. In fact, it’s the largest of all the micro compact optics, and the Schema mounts it with ease.

The Schema features passive retention at the trigger guard. It’s nice and clicky and keeps the gun in place till you grip and rip it. The trigger is fully covered, so there are no safety concerns. Additionally, the mouth of the holster is reinforced to allow for safe reholstering.

At the Range and In Action

You don’t buy a new car without looking under the hood, and you don’t wear a new holster without testing it dry and at the range. I test-drove the Schema with a ton of dry fire draw strokes and eventually moved to the range. At the range, I fired the MPTC Concealed Carry qualification to give the holster some action.

Off the bat, I appreciated how easy it is to get behind the grip and get a good firing grip on the gun. With no struggle, I could get the gun up and on target in a hair over a second. I really need to practice to get that subsecond drawdown. However, nothing in the Schema would prevent me from achieving a faster draw. It’s purely my lack of practice.

The Schema allows for a clean and consistent draw. My draw was fairly fast off the bat, and it didn’t take much practice to get the gun out and on target. The holster is cut so your hand won’t touch most of it on the draw. I’ve had holsters that are a bit bulky, and when you draw, you risk bringing the holster out with the gun. That isn’t an issue here.

Between draws, the holster doesn’t move or loosen either. It hits all the high water marks for a quality holster. The only thing stopping me from making this my all-the-time EDC is the lack of a tuckable clip.

If your gun wears a compensator, the Schema isn’t for you. And if it wears a light or laser, then it’s not for you either. Keep that in mind. For most of us, that isn’t an issue, and the Schema is a solid holster at a great price point. Safariland makes great stuff, and the Schema is no different.

The Caldwell XLA M-LOK Bipod – Get Some Support