With the explosion of concealed carry, we’ve seen a crazy market spring up to accommodate everything from holsters to triggers. Basically, a shooter can find any upgrade they could want for their concealed carry piece. One such upgrade gaining popularity is compensators. Compensators have been a staple of competition guns for decades, and the move to carry firearms has been impressive. The SIG P365 is likely the most popular carry gun on the market, and Parker Mountain Machine has released what might be the ultimate compensator for the P365. The PMM 365 Comp is an exciting design that’s surprisingly efficient. 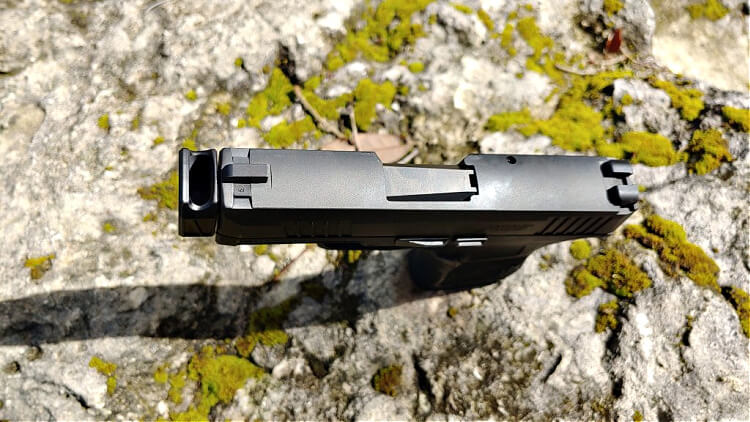 Why would you want a compensator on a carry pistol? Especially one as small as the P365? Comps reduce muzzle rise and allow you to accurately fire rapidly with control. These comps can drastically increase your ability to handle your gun, especially when it comes to +P defensive ammo or one-handed firing. Who doesn’t want less muzzle rise when they hit the trigger? The PMM 365 Comp makes your P365 handle like it’s a much larger gun.

When it comes to comps and adding threaded barrels, you are adding something to your gun that will likely differ in look from your weapon. The shade of black anodizing could be different, and comps rarely match the lines of your slide. They also add some substantial length to your gun. Three-quarters of an inch is considered a short compensator. 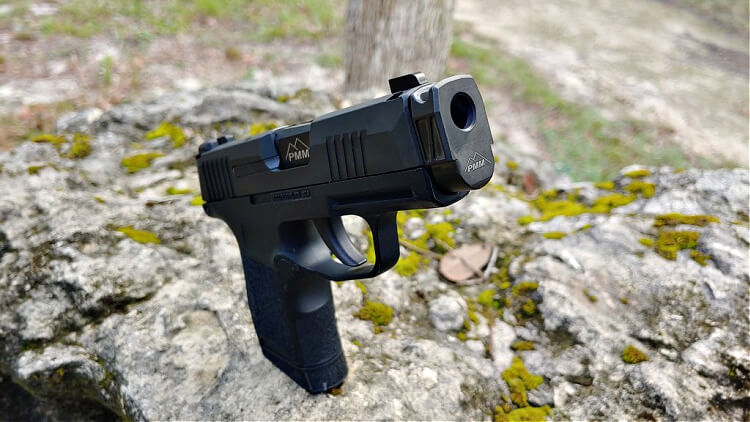 It’s short and light, and they found a way to match the grayish finish and lines of the compensator with the SIG P365. It looks like SIG themselves could have produced it and sold it as a factory option. It fits perfectly flush to the slide and is a brilliant design.

The unique flush fitting design keeps things small but also necessitates a specialized installation. On PMM’s website, they list a very detailed video on how to install the compensator. The process isn’t complicated, but it is specific. I suggest you watch the video and follow the instructions. This means using shims and measured pre-tension before using the wrench to line things up. Trust me, don’t wing it; the video has useful tips and is well worth the 11-minute dedication.

If you are like me, as soon as you get this thing installed, you’ll want to hit the range. You just have to know the difference the PMM 365 Comp makes for your favorite carry gun. Let me tell you now—the difference is substantial.

I used various 9mm loads, including some basic 115-grain plinking ammo, some 124 grain +P JHPs, and some 147-grain JHPs. These three weights are all standard in the self-defense realm, so I wanted to see if the PMM 365 Comp would allow the P365 to punch above its weight. 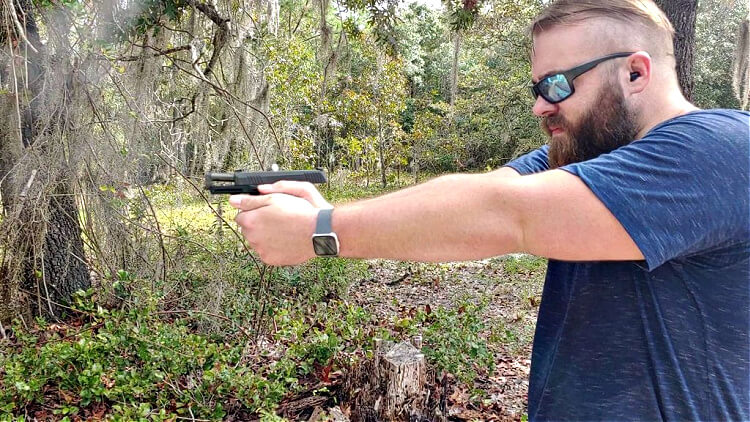 I carry 124 grain +P M17 rounds in my P365, and they tend to be a little snappy compared to plinking ammo. Imagine my shock when I sent my first 124 grain M17 round downrange, and it felt almost identical to how a 115-grain FMJ round felt! It pasted a smile across my face, and I double-checked the magazine to make sure I had the right ammo on board.

I popped that mag back in and dumped it into the target. The difference was significant, and I was quite pleased. Rapid-fire was significantly more comfortable with the PMM 365 comp installed. Less muzzle rise meant increased control and decreased par times between each shot. PMM claims a level of muzzle rise reduction between 30 to 40%, and I think that’s a modest number. 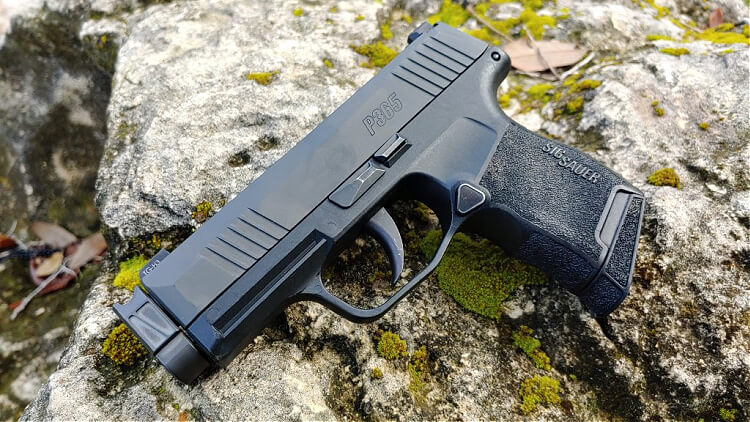 The PMM 365 Comp tamed my chosen self ammo to a surprising degree. The 147-grain load was also tamed. The muzzle rise was reduced to about the same amount as the 124 grain without the comp, or even a little below that. It’s snappyish. 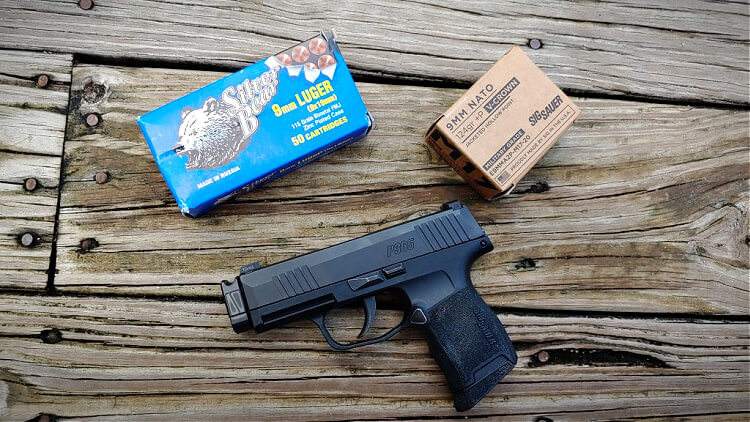 The 115 grain had a reduction in recoil, but 115-grain loads are already somewhat soft shooting. The gun barely moved between shots running this load through the compensator. So, even though the PMM 365 Comp is more efficient at reducing recoil with more powerful loads, it still trims the fat around 115-grain loads significantly.

The oddest part was learning that I could move faster with the comped pistol. For half a moment, I would pause with this muscle memory of expecting more recoil built into my shooting. The best way to describe it is that it makes a P365 handle almost like an all-metal P226.

Compensators on handguns can reduce reliability with some weaker loads of ammunition. They are made to tame ammo, and they can tame it too much, reducing reliability with soft shooting, cheap, plinking loads. The PMM 365 Comp is designed to function reliably with all types of standard ammo, from base-level 115-grain loads and up. 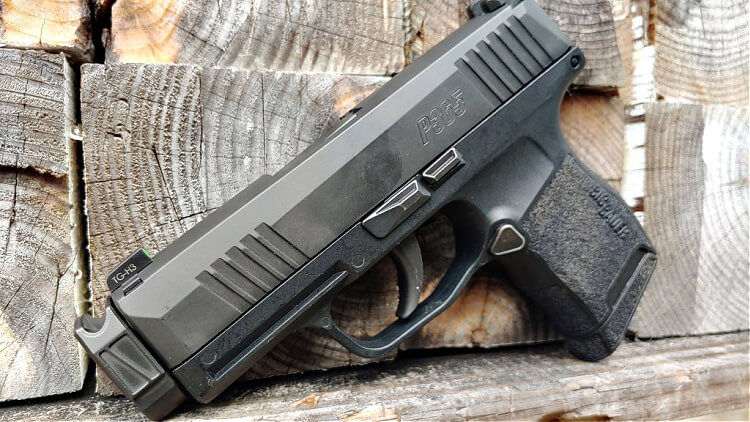 The PMM 365 Comp did not affect reliability in any way. I used standard 115 grain Winchester White Box, some SIG 115 grain, and even some cheap steel cased Winchester Forged. The gun ate without issue, the comp reduced muzzle rise, and everything was in harmony.

Smile and Wait for Flash

A big complaint with comps is all that gas has to go somewhere and that gas and flash can be detrimental. Increased muzzle flash is a common complaint with comps but is also misunderstood. Does the PMM 365 Comp create more flash than an uncomped barrel? Sure. Is it a big deal? Nope. The flash is not so bright that it will kill your night vision if you shoot in a low light situation. A 9mm with modern defensive ammo doesn’t create that much flash. A comped 44 Magnum can kill your vision at night, but a comped 9mm isn’t an issue. 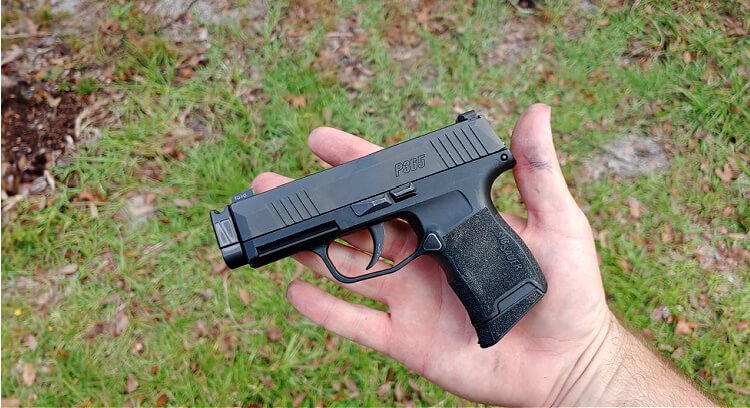 What about the gas? If you shoot from close retention, will you burn yourself? The PMM P365 Comp is only a compensator and doesn’t have side muzzle brakes. The gas is only going up. If you cant the gun just slightly to the side while you fire close retention, you won’t even notice the gas. If you don’t cant the gun, you feel some gas, but it’s a mild discomfort. I would hold my hand over the comp, but for normal, common use, you’ll be fine.

The PMM 365 Comp is an awesome addition to your Sig P365. There is an option for both the P365 and the P365 XL. It’s extremely well made, and the design is rather ingenious. Parker Mountain Machine is doing some cool stuff with compensators, and the PMM 365 Comp is the perfect example of a forward-thinking company.

What do you guys think about comps on carry guns?

Let us know below.