You can risk it with a single stack 9mm. The Smith & Wesson Shield works. The GLOCK 43 is a fan favorite. I’m partial to the Honor Defense Honor Guard. But even at 6’4” and 240 pounds, I find that a single stack 9x19mm worn on my belt limits my ability to move. I carry a Kel-Tec P3AT. It is a .380. While the .380 round isn’t my first choice for self-defense, there are viable options that can be effective. The Kel Tec 380 is slim, short, and flat. As such, it disappears easily in a pocket.

This article is from September 2017. 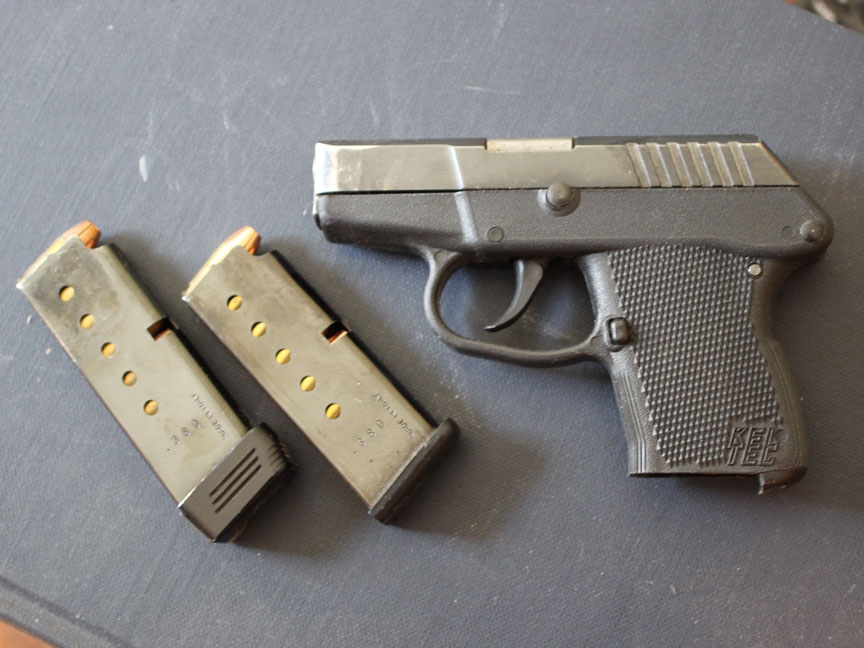 Carrying in your front pocket, strong side can require a new set of concealed carry skills. First, the gun can’t be allowed to print. Then you have to ensure that the trigger is protected. A gun like the P3AT has no external safety, and the last thing anyone wants is a front pocket negligent discharge. For several reasons, the holster you use for the Kel Tec P3AT is really important, and of course, practicing with it is essential.

Which holster for the Kel Tec 380?

I’ve used this Recluse pocket holster for at least five years. During that time, I’ve had the Keltec 380 in my right front pocket. Even when I carry a larger 9mm, I keep this joker close at hand. I consider it a solid back-up and feel comfortable with it as a primary carry gun when I can’t conceal anything else. 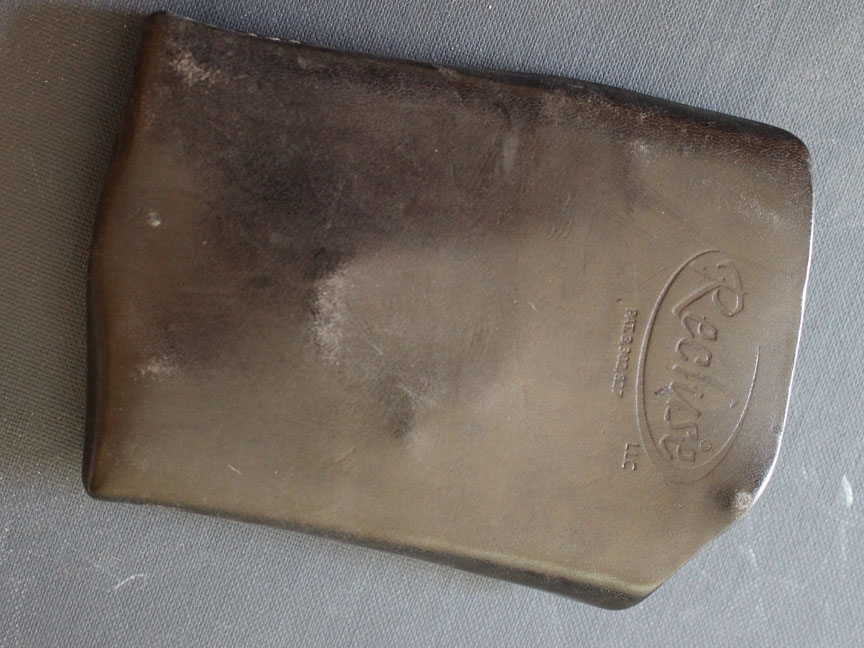 Some of the Recluse holsters have a more pocket-shaped cut. I prefer the square ones. In this age of big phones, I can let this holster print with little fear of it being recognized.

The recluse has a solid foam trigger block that holds the gun securely. The muzzle is braced by a stitched fold in the leather. It also holds a spare magazine. With one in the pipe, and the 6-round mag in the gun, that adds up to 14 rounds. 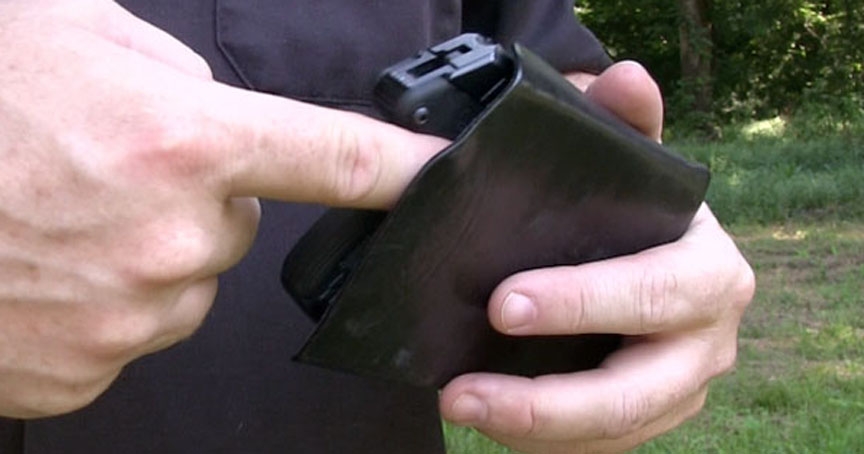 To pull the Kel Tec 380, simply work your fingers between the leather and the grip. When you press the leather away from the gun in the draw motion, it grabs inside your pocket. There’s nothing, then, keeping you from drawing the gun.

There’s also nothing keeping your finger off the trigger. So you have to be conscious about this motion. Practice it with the gun empty (double-check this), but cocked. Draw and see how hard it is to accidentally hit the trigger. With even a modicum of discipline, it is all-but-impossible.

Then draw and present to a safe target and dry-fire. Run this numerous every trip to the range. Run it at home, if you feel like you can do it safely. After you’ve built the basic muscle memory for the draw, increase the speed. Work from concealment. Practice with the Keltec 380 like your life depends on it. 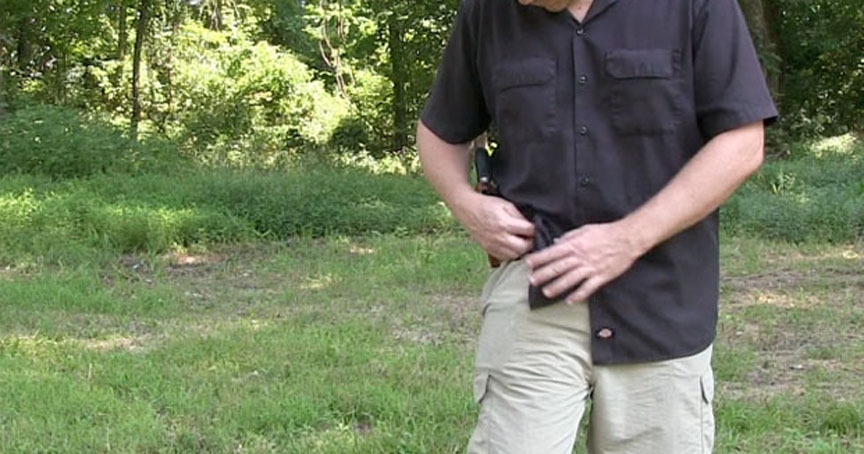 Build up to live fire and practice that, too. One element of this that bears mentioning is the reholster. Don’t try sticking the Kel Tec 380 back into your pocket out of the holster. Remove the holster, put it back in, then conceal the holster.

After 5 years, the leather is showing some signs of “relaxing.” When you soak it with sweat and then let it dry around the gun, that is bound to happen. But it still hides the gun well enough for me to feel confident that only the initiated would recognize it in my pocket.

Because this is a .380, I am even more selective about the type of ammo I put in. I prefer the LeHigh Defense rounds. Their copper bullets offer impressive terminal ballistics.

A fancy bullet, though, won’t compensate for poor shot placement. The rudimentary sights on the Kel Tec P3AT limit its effective range, for sure. Though not a practical distance for self-defense, 25-yard shots aren’t impossible.  I can put rounds onto a 12” plate at 25 yards. At 7 yards and under, the P3AT is more responsive and intuitive, and much faster to target.

This is a gun that requires practice. When I first worked in my Keltec 380, I had issues finding ammo that would feed reliably. Worse yet, I had a couple of extractors snap. Nothing stops the show cold like a stuck piece of brass.

I worked with Kel-Tec to fix the extractor issue. When the second snapped (by which I mean it broke in half and flew off), I thought I’d call it and sell the gun. But I didn’t feel comfortable selling it on the used market knowing it had reliability issues.

Kel-Tec sent me a pile of extractors. The next one I put on worked perfectly. And the gun broke in after a few range sessions and has run flawlessly ever since.  When I had 500 rounds through without a hiccup, I started carrying it.

The P3AT has Few Frills

There is no half-assing this gun. There’s no hold-open for the slide so it won’t lock open with it is empty. The trigger, which is a bit heavy, requires a firm pull to actuate. And you won’t need any finely-tuned trigger finger placement, either. Grip the damn thing as best you can with its small frame, and squeeze it like you mean it. I even prefer shooting it one-handed.

Once the Kel Tec 380 goes bang, the muzzle flip is sharp. Manageable, but sharp. And the reset on the trigger is a bit longer than I’d like. Yet it works. And you can watch the hammer travel, too, which is an added bonus.

Don’t mistake this for a target gun. It is accurate enough, but you’re not going to put down MOA groups. Understand its purpose. It is a get-off-me gun — a last resort. The Keltec 380 is exceptionally easy to hide, easy enough to work, and it is just about the most affordable gun at your local FFL: $220 or so for the gun, $60 for a holster, and then the cost of ammo. Not a bad deal.