In this article, we’ll be talking about the Masterpiece Arms 9mm Defender. First, however, we have to discuss the MAC 10 9mm.

If you grew up watching action movies from the 70s, 80s, and 90s, you’ve undoubtedly seen some variation of the MAC-10 machine pistol. Though it is commonly associated with gangs and cartels, it was used by some special troops and agents. However, the MAC-10 secured it’s strongest seat in Hollywood, wielded by legendary actors like John Wayne and Kurt Russell and used in iconic films like Scarface.

This article was originally published January 2020.

Originally designed in the 1960s by Gordon Ingram, it was intended to be paired with a Sionics brand suppressor for commandos to use in clandestine operations.  Its telescoping-bolt design and folding stock made for a weapon that was much more compact than the submachine guns of the era.

Being a specialized weapon, and one that was restricted in commercial sales by the National Firearms Act, the MAC-10 and its subsequent variants (even the semiautomatic ones) never achieved widespread use.  They, along with the TEC-9 and the Uzi, have been described as “the guns that made the 80s roar”, and are often more associated with criminal gangs than they are Special Forces soldiers.  The guns had spotty production by a variety of companies over the years (the Military Armament Corporation, Cobray, SWD, etc.), and sometimes suffered quality control issues.

The guns originally were available in .45ACP and 9x19mm, with the .380 being added later.  All of them were, originally, open bolt, blowback operated, select-fire machine pistols, made of stamped steel.  Federal regulation repeatedly encroached on the already limited market these guns had; the Firearms Owners Protection Act of 1986 closed the NFA machine gun registry so that no new machine guns could be made legally transferrable between private citizens, and the 1994 Crime Bill (with its attached “assault weapons” ban) limited magazine capacities to 10 rounds.  The entire MAC-10 family was almost legislated out of existence. 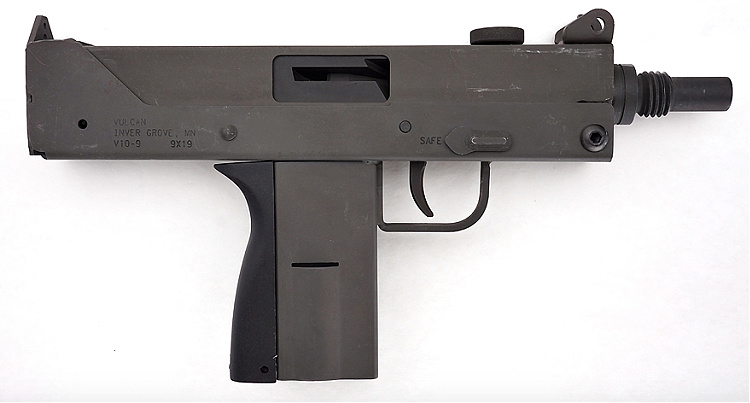 Some of you might be asking yourselves, “STEN magazines?  What?”  Younger shooters might not remember the decade of the ill-conceived “assault weapons ban”.  One of its provisions prohibited the sale of magazines holding more than ten rounds to anyone but government entities.  The only ones that could legally be sold to ordinary private citizens were those manufactured before the law was enacted in September of 1994.  These became known as “pre-ban magazines”, and given that the supply was limited, prices steadily climbed.  In 1999, for example, a 13-round magazine for a Glock 21 would cost something like $110.  A quality manufacture (Colt) 30-round AR-15/M16 magazine could run $50 or more.  Worse, affordable magazines were often junk.

Surplus magazines for the British STEN submachine gun were, at the time, cheap and abundant.  You could buy them in bulk, most of them liquidated inventories from the Second World War.  Nobody wants a MAC-style pistol that’s limited to ten rounds, so Masterpiece Arms wisely decided to utilize ones that were readily available to the public.

A lot has changed between then and now.  The so-called assault weapons ban expired in 2004, and quality magazines are readily available for most firearms.  STEN magazines are neither inexpensive nor abundant, surplus stocks having dried up.  Masterpiece Arms primarily focuses on high-end precision rifles and chassis systems, but under their “Defender” line, they still make the MAC 10 9mm and MAC 10 5.7x28mm.

The variant I purchased is the MPA-30SST.  It’s a product-improved variant of the old Cobray M11/9.  It has a straight grip and utilizes STEN-type magazines.  The charging handle has been moved from the top to the left side.  A length of Picatinny rail is mounted to the top of the upper receiver and another, shorter bit is mounted to the underside of the lower in front of the trigger guard.  It comes with a “safety extension”, a sort of faux-suppressor machined from solid aluminum.  This can be removed, revealing a muzzle threaded at 1/2×28.

The charging handle is on the left side of the upper receiver and doesn’t reciprocate upon firing.  It is similar in construction to that of the FAL rifle.

While the pistol is descended from the M11/9, and through it the original MAC-10, I believe it to the finest iteration of the pistol ever produced.  Masterpiece Arms’ quality control is excellent, and the weapon has been modernized and improved in several ways.

The most noticeable difference between this gun and an original is the improvement in the grip. The original had a stamped steel grip frame that was blocky and uncomfortable.  The MPA-30 has a lower receiver machined from aluminum.  This results in a significant weight reduction as well as improved ergonomics.

The magazine release is a large paddle at the heel of the grip.  Removing magazines is easy and can be done without breaking the firing grip.

A note about magazines: as stated above, original STEN magazines are neither abundant nor inexpensive these days.  For years, TAPCO manufactured plastic magazines that would work with either the STEN or the Masterpiece Arms pistol, as well as a magazine loader.  They seem to have discontinued production of these, though they can still be found on sites like Gun Broker and GunsAmerica.  Masterpiece Arms still manufactures magazines and a magazine loader for the MPA 30 Defender Pistol, and they can be purchased from their website.  I was able to stock up on magazines by hunting around online.

(If using a proprietary magazine is a deal-breaker for you, Masterpiece Arms also sells a variant of this pistol that uses Glock 17 magazines.)

The TAPCO brand magazines I purchased are robust but proved extremely difficult to load by hand.  I purchased a magazine loader tool and would recommend it if you’re interested in this kind of pistol.  Without it, getting more than twenty rounds in the magazine was almost impossible.  With it, loading them to a full thirty rounds was no trouble.

In my first outing with the MPA 30 Defender Pistol, I experienced numerous malfunctions with Remington UMC (green and white box) FMJ ammunition.  For my next time out, I purchased Winchester white box 9x19mm NATO spec ammunition and the malfunctions ceased.  NATO-spec 9mm runs a little hotter than SAAMI-spec, and sometimes a blowback weapon (especially one originally designed as a machine gun) needs a little more oomph to reliably cycle. 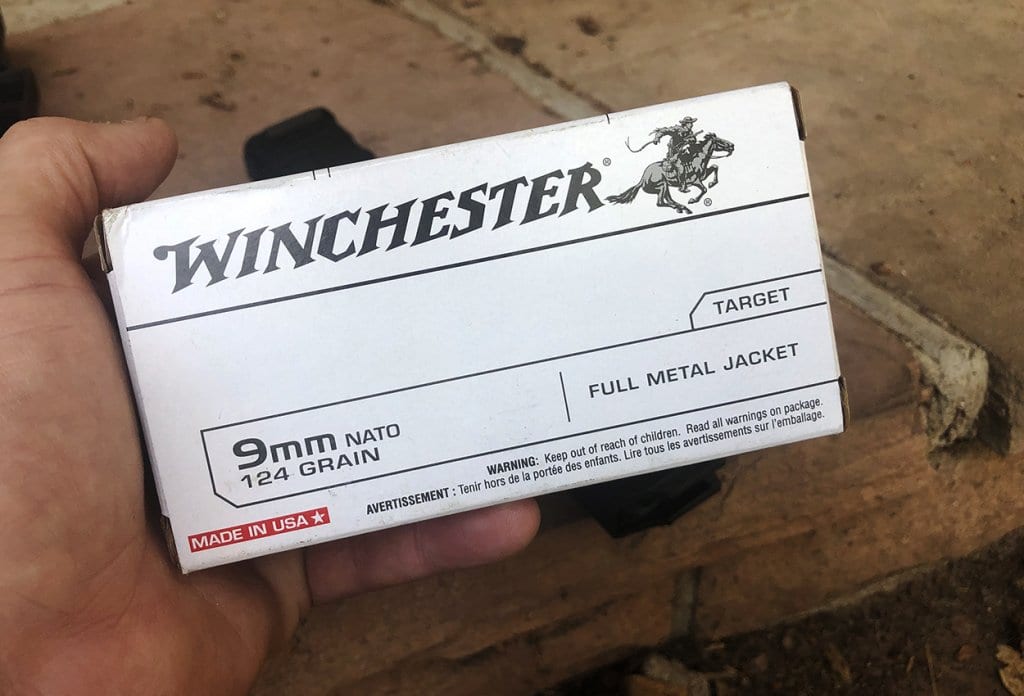 How Does it Shoot?

In my honest and subjective opinion, the Masterpiece Arms 9mm shoots about how I expected.  I was pleased to discover that it didn’t have the unpleasant trigger slap that semiauto MAC pistols have been known for.  You can feel the bolt cycling in the trigger, but it’s not a distraction. Also, the trigger comes with a rubber boot over it to cushion it further. 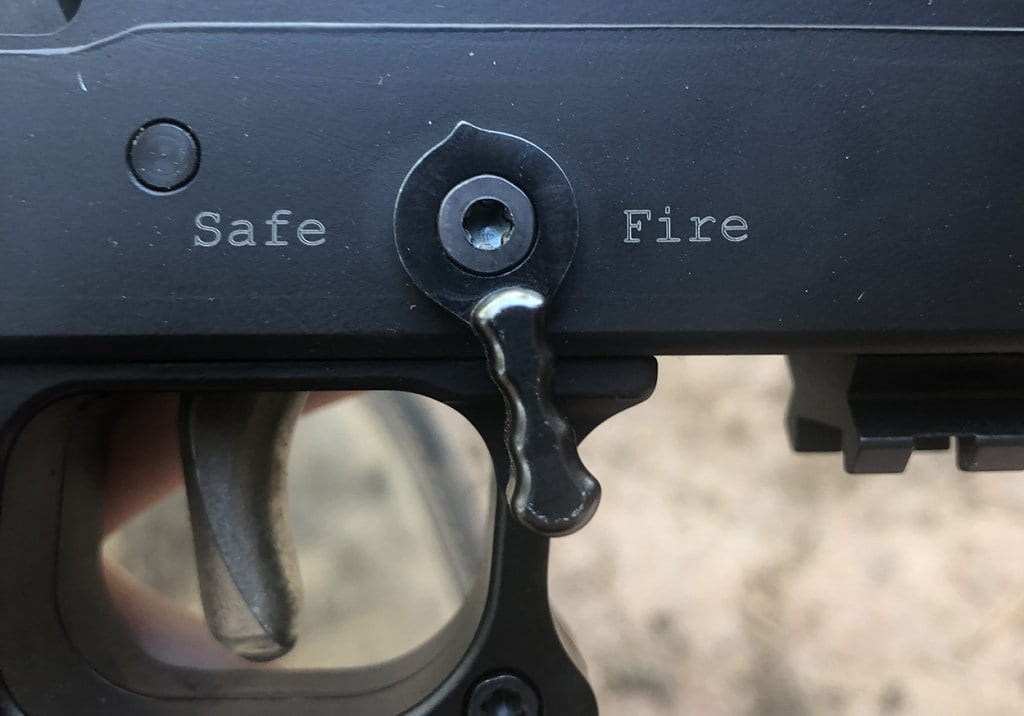 The Defender is a large pistol, large enough that it doesn’t handle or point like a conventional handgun.  Despite weighing almost four pounds the recoil is noticeable. Being blowback operated and originally intended to be full auto, it utilizes a big, heavy bolt, and all of that mass flipping back and forth can be felt by the shooter.

The gun’s metallic sights are also improved over the originals, at least in terms of firing the weapon like a pistol (vs. having a shoulder stock).  The rear sight is a V-notch and the front sight is a steel post, protected by stout wings.  Both are painted white for better visibility, and the sights proved serviceable, if not outstanding.

Instead of relying on them, however, I decided to install a small red dot sight.  The Sig Sauer Romeo-5 is small, lightweight, of decent quality, and has proved very durable in tests performed by various YouTubers.  It can also be purchased for about $120, so it seemed like the perfect match for the MPA-30.  I was not disappointed.

The MPA-30 is a hefty pistol and one that’s more awkward to hold than a conventional semiautomatic handgun.  It could definitely benefit from a single-point sling or an arm brace.  If you wish to add either of these, there are threaded holes in the rear of the receiver that facilitates attaching them.  Masterpiece Arms sells both a sling swivel attachment and a buffer tube adapter, which will allow you to install an arm brace designed for an AR-15-style pistol.  Both of these items can be purchased from the MPA online store.

Owing to its ancestry, the MPA-30 is, mechanically, a very simple design.  Removal of the front push pins (inner and outer) allows the upper receiver to slide off.  The bolt and buffer come out as one piece.  The barrel is fixed into the upper receiver.  The gun is easy to field strip and only has a few parts. 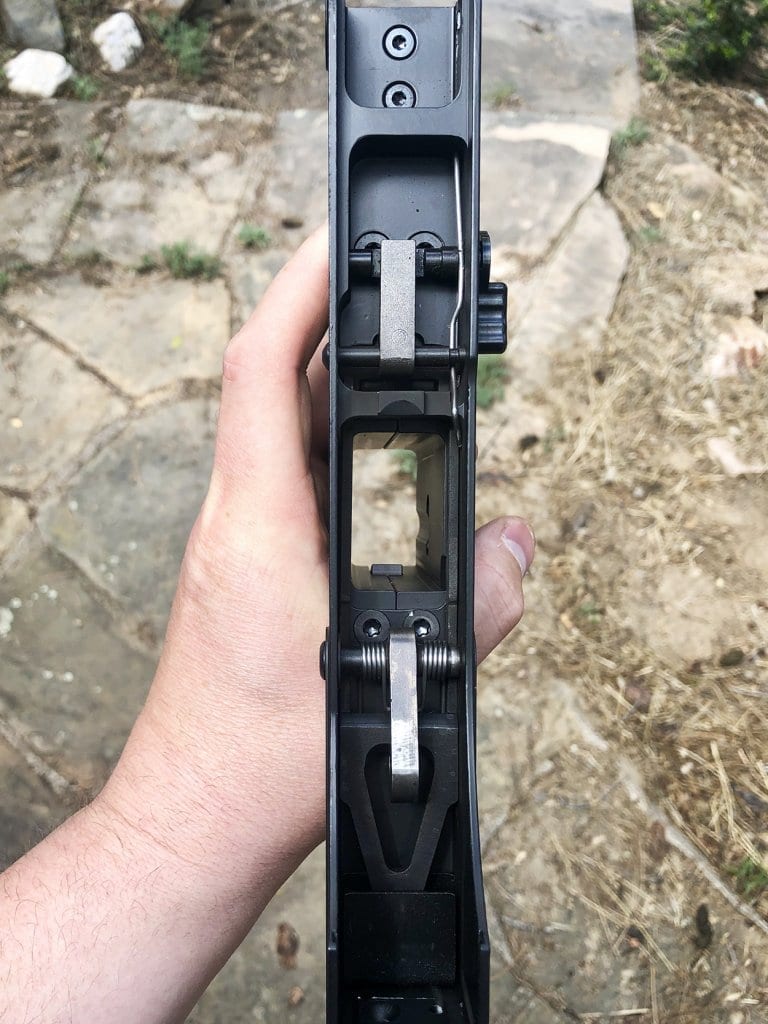 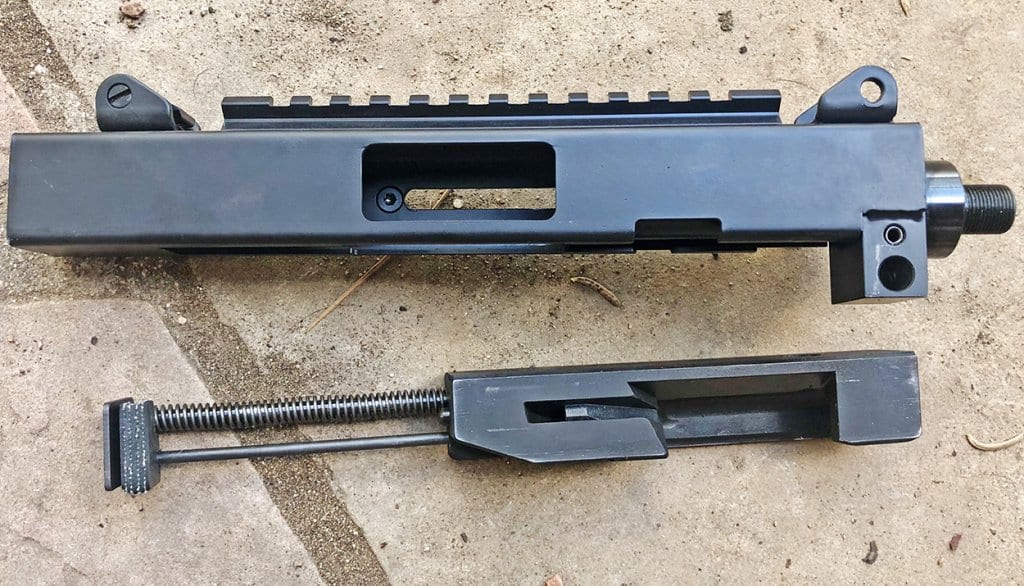 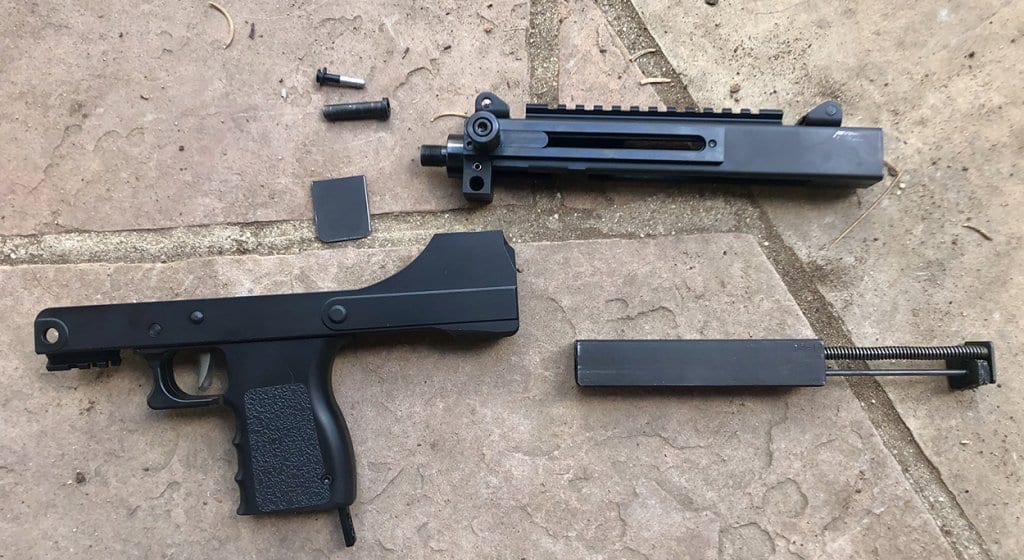 Perhaps the most important question one could ask a firearms reviewer is, “would you recommend the Masterpiece Arms 9mm?”  In the case of the Masterpiece Arms MPA-30, my answer is yes, but with some caveats.  If you want an M11-style pistol, the MPA line is the pinnacle of the design’s development. Not since Gordon Ingram first dreamed up the MAC-10 in 1964 has such a high-quality example of the gun been produced.

However, the legal requirements to sell this gun as a pistol place some limitations on the original design.  Lacking the select-fire trigger group, it cannot be used as originally intended.  Not having a shoulder stock somewhat inhibits good shooting, though this can probably be mitigated by using a taut single-point sling or an arm brace.  As is, the Masterpiece Arms 9mm doesn’t really do anything a conventional 9mm pistol can’t, and there are certain roles it isn’t suited for (carrying this weapon concealed is not practical, for instance).

This is not to say that it couldn’t be used to defend your home. Or that it couldn’t find some utility as, perhaps, a truck gun.  I just don’t know that it would necessarily be better at these roles than other firearms. Also, if I had it to do again, I would perhaps consider the MPA-30-DMG model, the one which utilizes Glock magazines. Glock magazines are ubiquitous these days and are readily available at gun stores and online.

That all said, I love mine and don’t regret purchasing it.  It’s cool-looking, it’s different, and it’s fun to shoot.  Masterpiece Arms makes a good product. 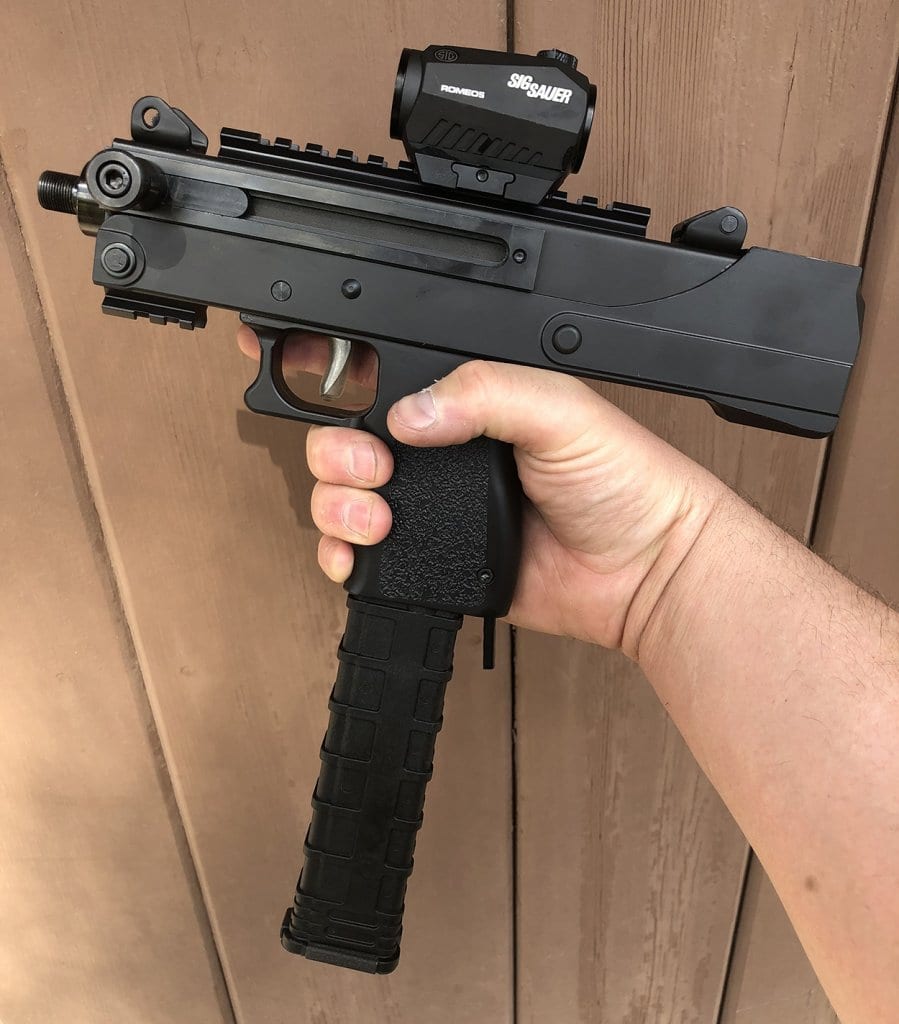 Movies from the 80s made many guns all but iconic. 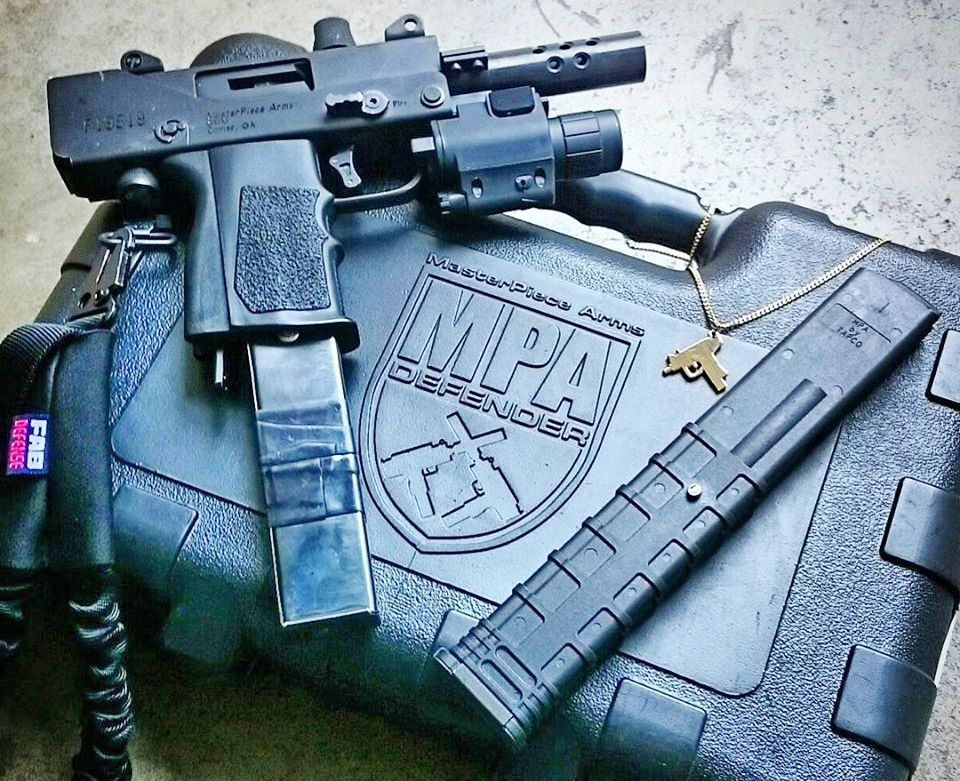 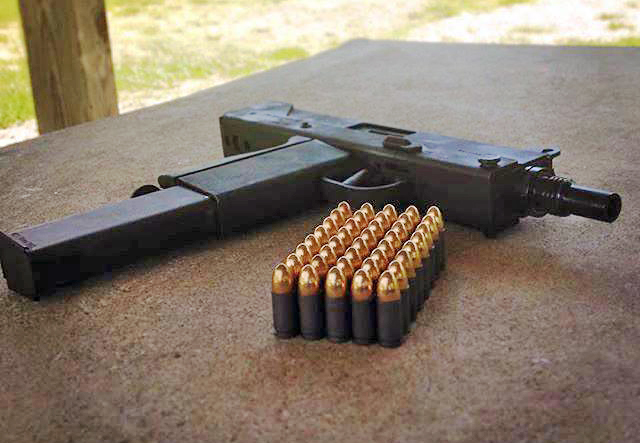 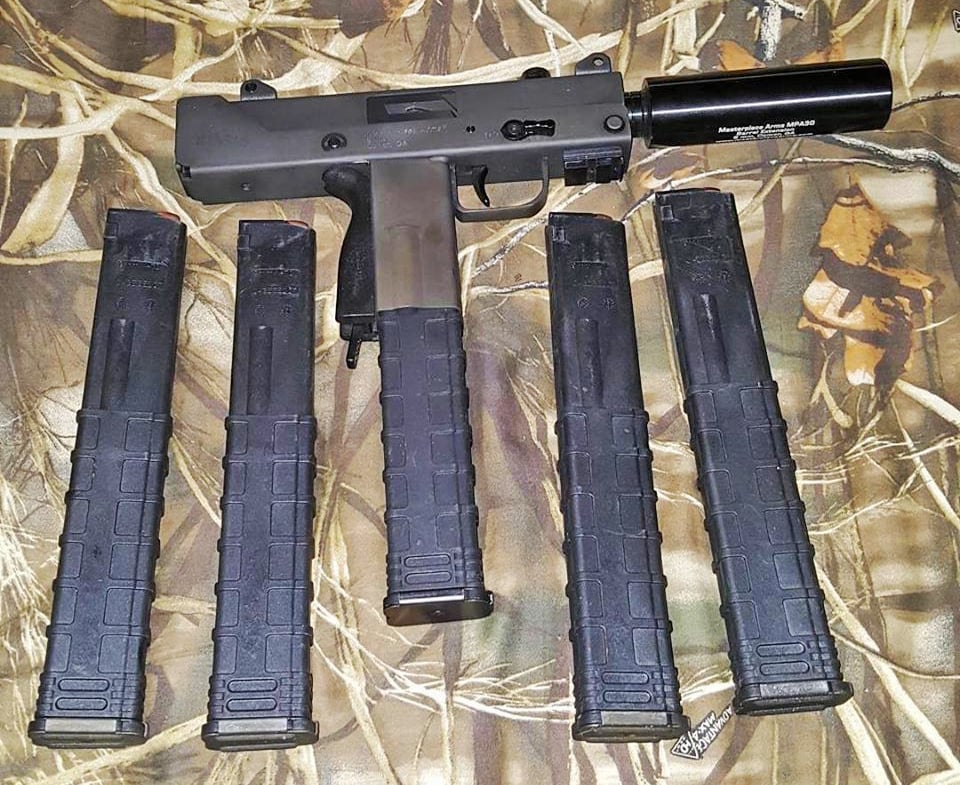 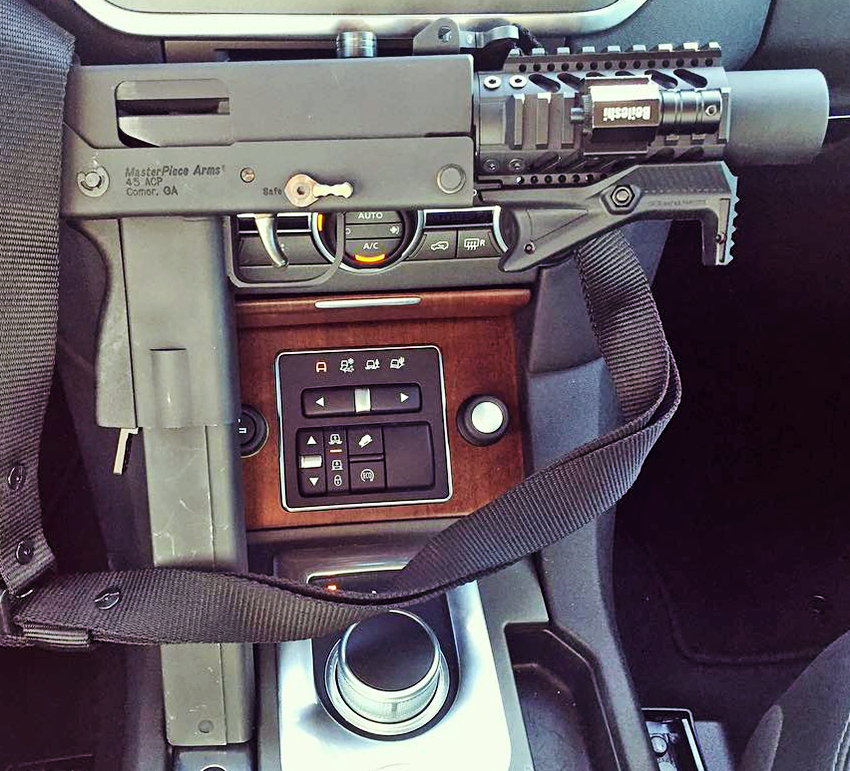 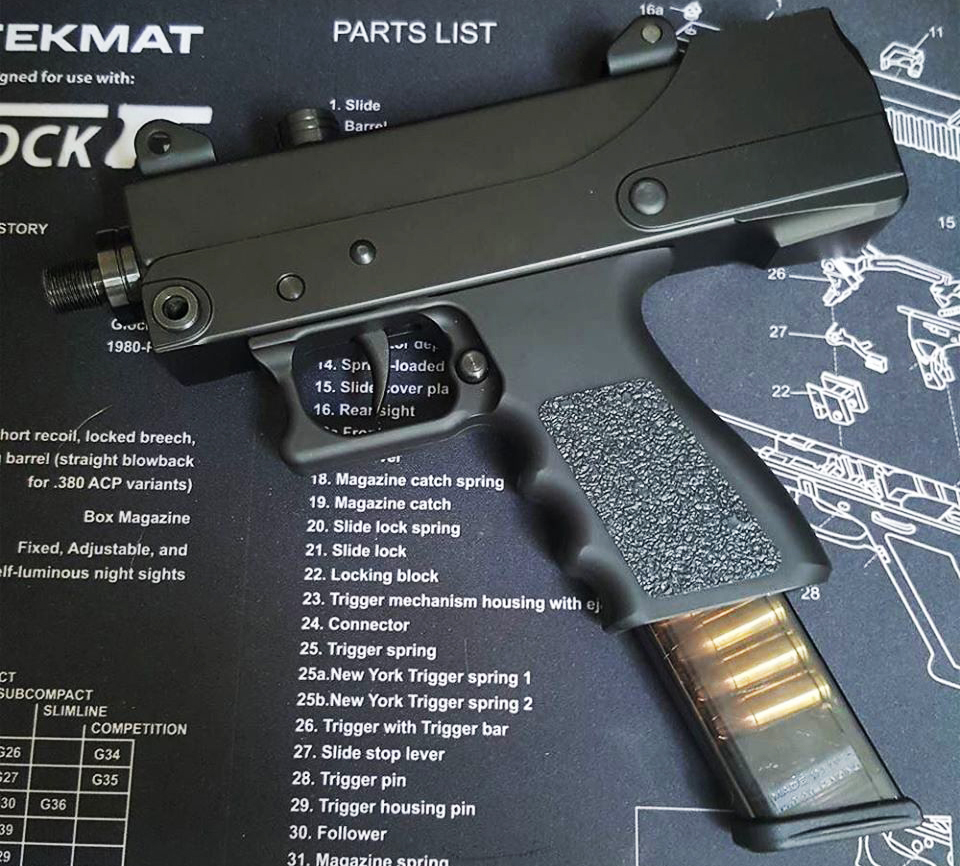 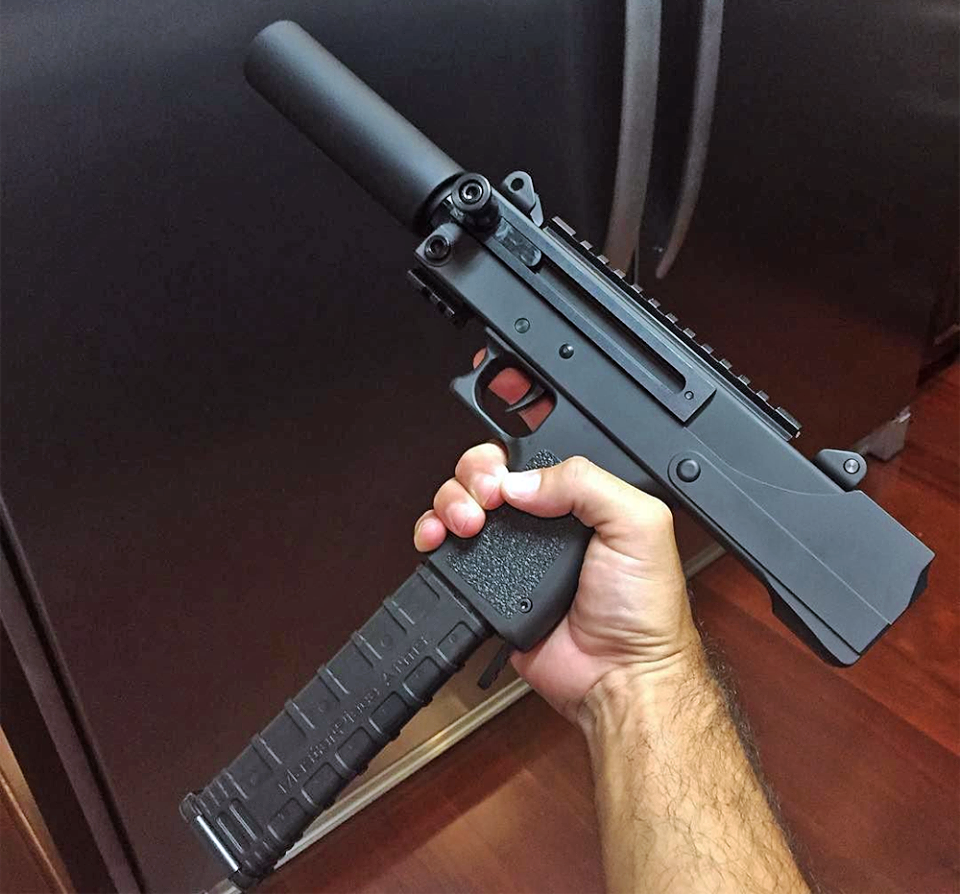 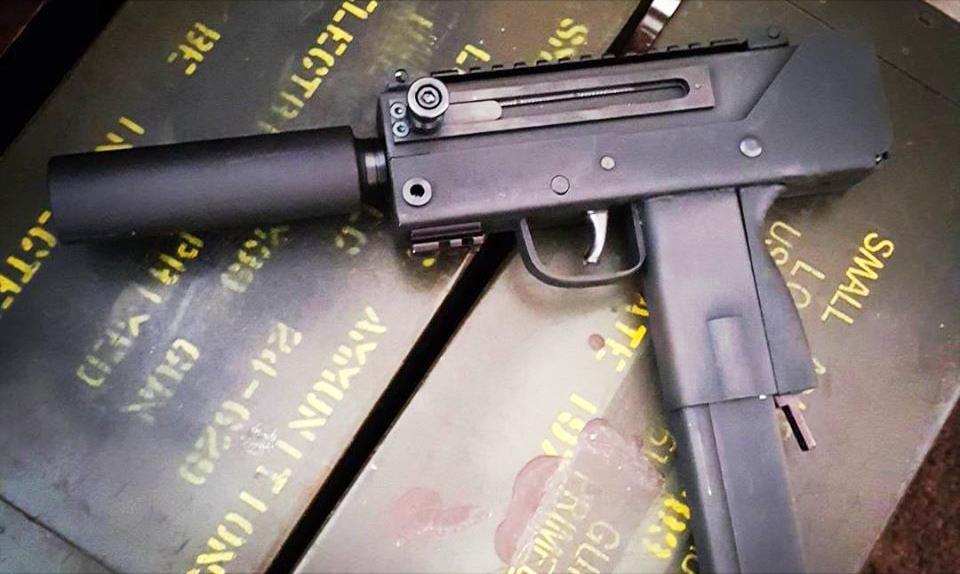 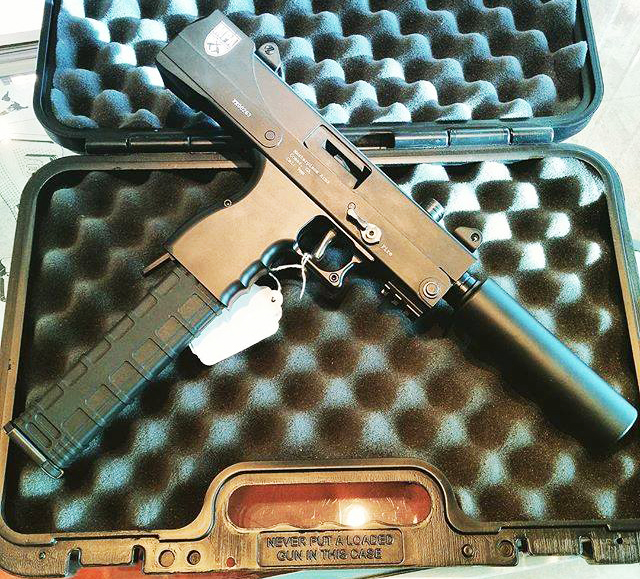 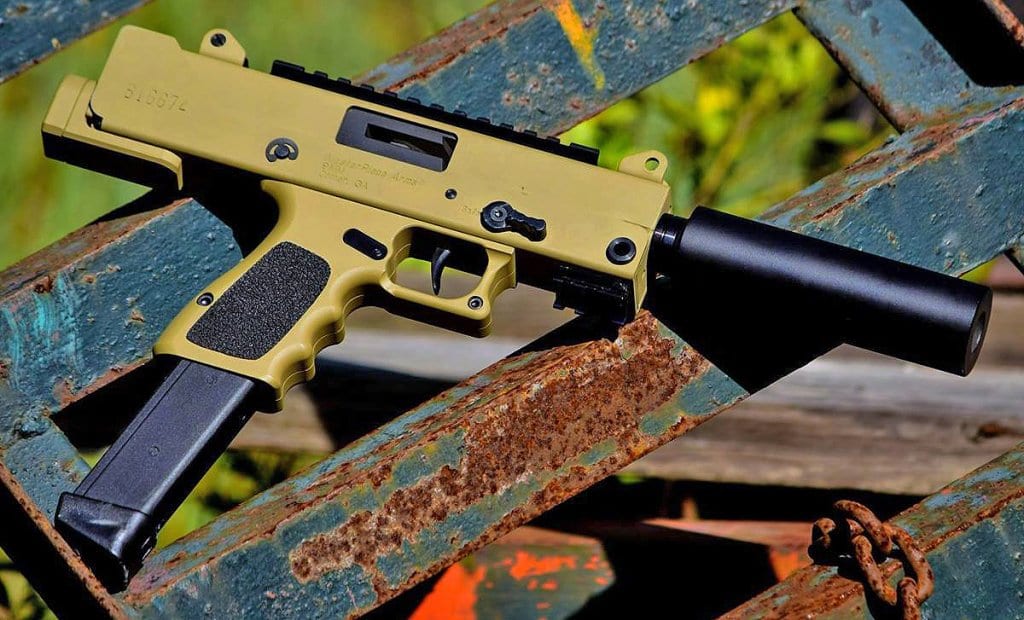 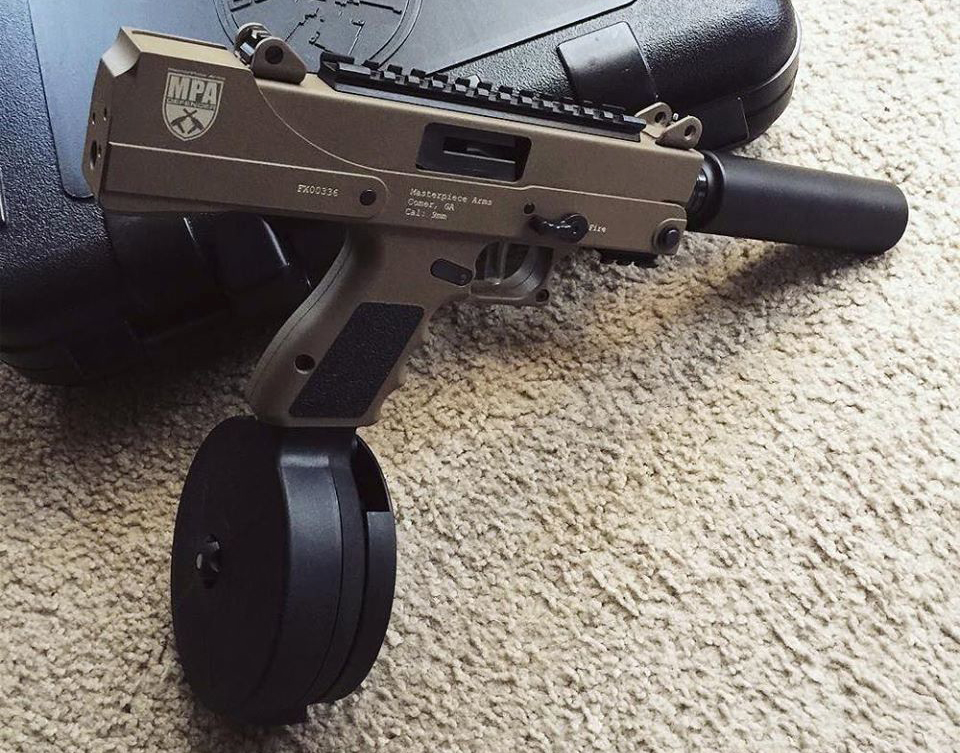 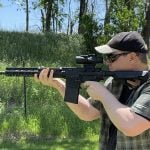