With the ever-increasing capacity of modern firearms, where even the smallest conceal carry gun now has 10+ rounds in the primary magazine, an aftermarket magazine base plate is still a popular option — and for good reason. Actually, reasons, plural. While factory magazines certainly do the trick for most applications, there are certain places where aftermarket base plates just can’t be beat. Here are a few of the advantages thought of just off the tops of our heads.

Who doesn’t want two more rounds in their gun? Nobody. Everyone wants to carry as many pew-pew seeds as possible, just in case they get into that once-in-a-lifetime gunfight that requires more than a handful of rounds. Not that you necessarily want to get in a fight where you might be outgunned, but it’s good to have the ammo at your disposal if it should ever happen.

Most aftermarket base plates offer at least a couple of extra rounds to the bottom, but not all do. Some are simply thicker, with no added capacity, maintaining the original number of rounds as the factory mags. 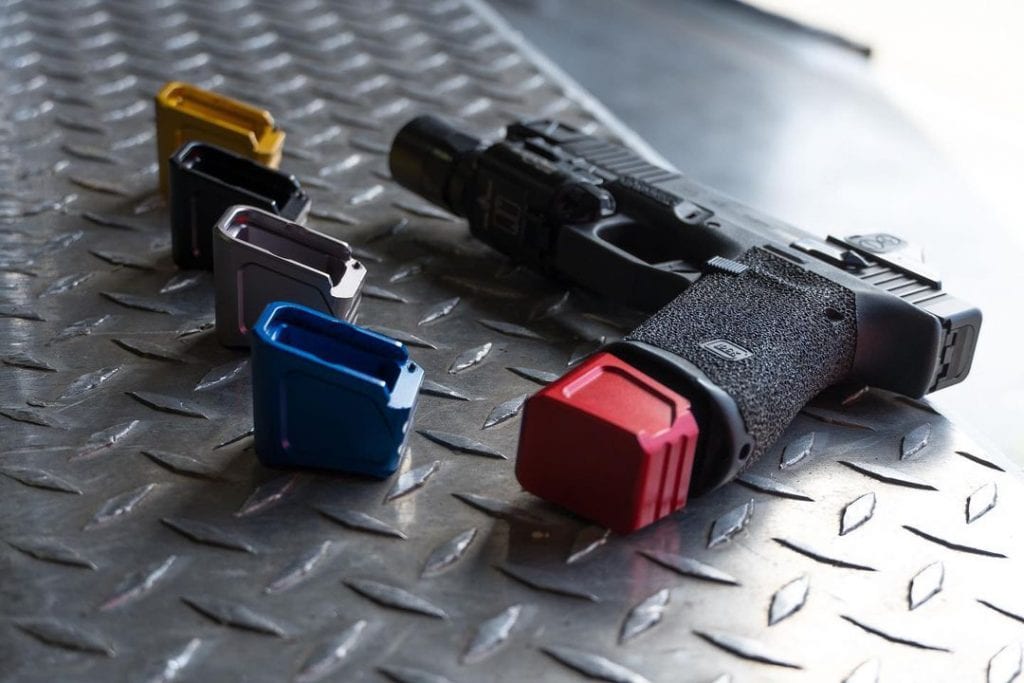 Whether you shoot competition or just want easier mag changes in your everyday life, adding a wider mag well to your grip can help steer the mag into its hole and seat it faster.

However, this may render your factory mags unusable as they can get lost inside oversized mag wells. The last thing you want in an emergency or a match is the inability to change mags at lightning speed. Solve this by adding thicker aftermarket base plates that are easier to reach and slam home during mag changes. The extra inch or so that they add will make reloading maneuvers ever so much easier and faster.

Even with the growing popularity of aftermarket accessories, non-factory magazine base plates are still low on the list of popular upgrades, even with all their benefits. This means it’s highly likely that at a match or in real life you may be one of the only ones around with these new fancy gadgets.

Think about the last time you went to a match or a training class where there were other shooters changing mags around you. How easy was it to forget whose mags were whose? If they all look alike, there is a good chance you will end up with more or fewer mags at the end of the day than when you started. If your base plates are a different color, they won’t blend in as easily, making yours stand out for easy identification later.

Speaking of easy finding, have you ever taken a class at a makeshift outdoor range that doubles as an open field the rest of the year? That grass can grow kinda tall even if it’s been recently mown, making it hard to find discarded magazines. But not if yours are bright red or yellow!

Have to drop a mag on the run and moved to shoot the second target? Spend less time digging around for the black mag in the shadows of grass clumps because smartly added a fluorescent aftermarket base plate.

Whether you shoot a full-sized gun or a subcompact, wouldn’t a longer grip be awesome? Yes, it would! Solve that problem by adding an aftermarket base plate. Regardless of whether the add-on contains extra rounds or just provides more length, you’ll be glad you have the extra real estate when it comes to recoil management.

One word of caution, however: printing. Remember that the grip is the biggest culprit when it comes to revealing you have a gun, so before you go slapping one of these extended doohickies on your carry gun, be sure it won’t add so much length to the handle that suddenly your carry gun becomes your wardrobe’s worst enemy.

Of the many lessons that I teach my new gun owner students, one of the most important is to be sure they have more magazines than they think they will need. One is not enough. Nor is two, even three, possibly four. They don’t have to carry them every day, but they should have replacements.

I equate magazines to car tires: they are wear items. They will eventually fail or break. One reason they fail or break is the factory base plates tend to be a bit flimsy. Drop a couple on a concrete floor during a match and you’ll know. I found that out the hard way but was able to continue because I had extra mags in my range bag. Shortly thereafter, I upgraded to aftermarkets. It hasn’t happened again since. 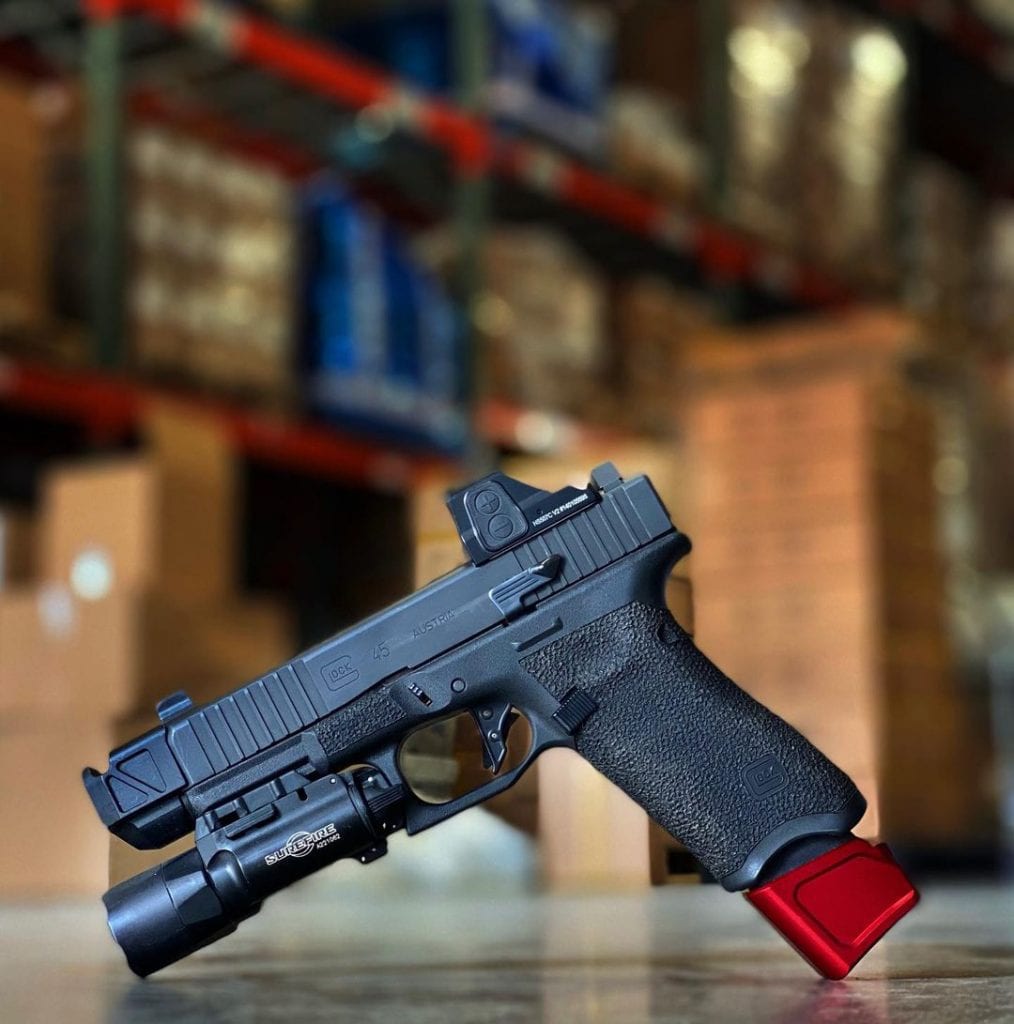 Because aftermarket base plates tend to be thicker and typically made out of metal instead of factory plastic, they stand up better to abuse that might otherwise take out lesser materials. We’ve seen base plates like the Glock magazine extension from Tyrant CNC (above) and the XTech VP0 mag extension (below) compile all sorts of dents and dings that would have destroyed their factory counterparts but keep running like champs.

6. Easier to Clean and Service

One of the biggest complaints about factory magazines is how hard the base plates are to remove for cleaning and replacing or servicing the spring. In gunmakers’ defense, this is done to prevent the base plate from accidentally dislodging when it’s not supposed to. This is a good thing. But it also makes it hard to operate when cleaning or servicing is needed.

Aftermarket base plates tend to have the same staying power as the factory mags they are replacing, so they will stay just as tight on the bottom, but because they are bigger, they are easier to grip and operate when taking the magazine apart. Putting them back on is also easier. A win all around.

Speaking of winning, your typical aftermarket magazine base plate usually complies with IDPA, USPSA, and other match requirements for weight, balance, and capacity. 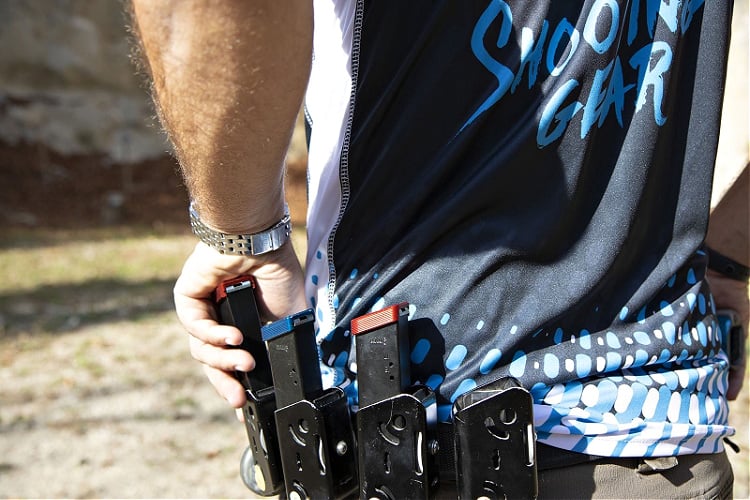 Be sure your aftermarket baseplates fit regulations before adding them to your match gun.

There are two advantages to aftermarket base plates in a match.

First is the aforementioned interface with the mag well. It’s always better to have a bigger target (pun fully intended) for your magazine to try to hit on a reload, so if you run a flared mag well and aftermarket base plates, you have the best of both worlds.

Second, bigger base plates are easier to grab from your mag pouch when it’s time to extract it and reload.

Check the rules for the base plate you are considering before purchase if this is important to you.

What are we forgetting here? What are some other advantages to an aftermarket magazine base plate?