I’ve already lied to you. The title is a lie. Calling these guns the MAC 11 and TEC 9 is not quite accurate. This isn’t a MAC 11, but an M11/9 from Cobray. Its commonly called a MAC 11, but to be fair, the MAC 11 is a full auto 380 ACP machine pistol. The M11/9 is a 9mm semi-automatic pistol. The TEC-9 is a TEC-DC9M, a derivative of the TEC 9. The DC was just a name change to beat bans, and the M stands for Micro, which means the barrel extension is not fixed and can be removed. Sorry, I lied, but the MAC 11 vs. TEC 9 is a little less complicated and wordy.

And that’s the topic of today’s Throwback Thursday. The guns I mean, not that I lied to ya. 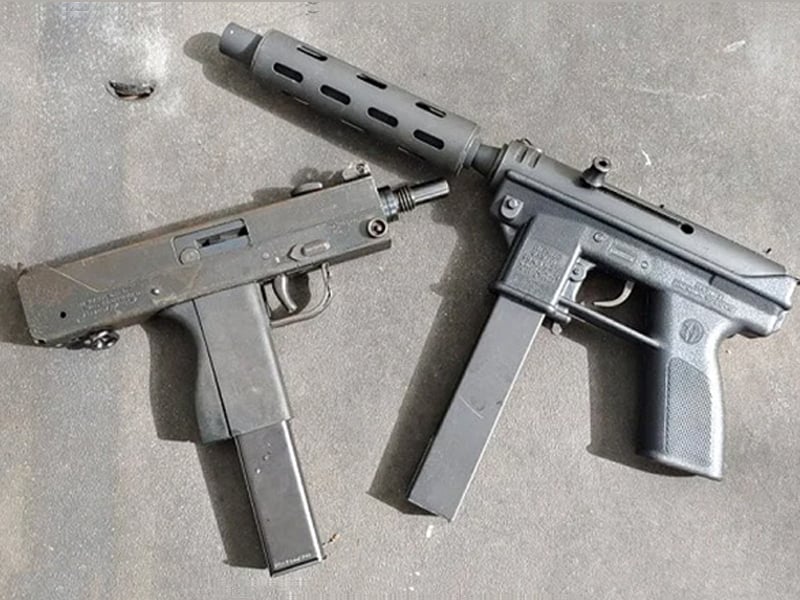 There is a point to this article, though. Let’s say you are a guy with an ‘import/export business,’ and you need the means to protect it. You need a weapon that can be used with one hand while racing your cigarette boat down the Miami coast. The gun doesn’t need to be accurate, easy to handle, or ergonomic, but it does need to look cool. You need a gun that makes a statement, and without a doubt, both the M11/9 and TEC DC9M are guns that make a statement.

The MAC series of SMGs was designed in the 1960s by Gordon Ingram for the military. The MAC series of submachine guns were never superbly popular outside of movies and TV, but the pop culture effect captured the imaginations of the gun-buying public. Cobray acquired the license to the MAC series and began producing its own variants of the MAC series, which includes the M11/9. 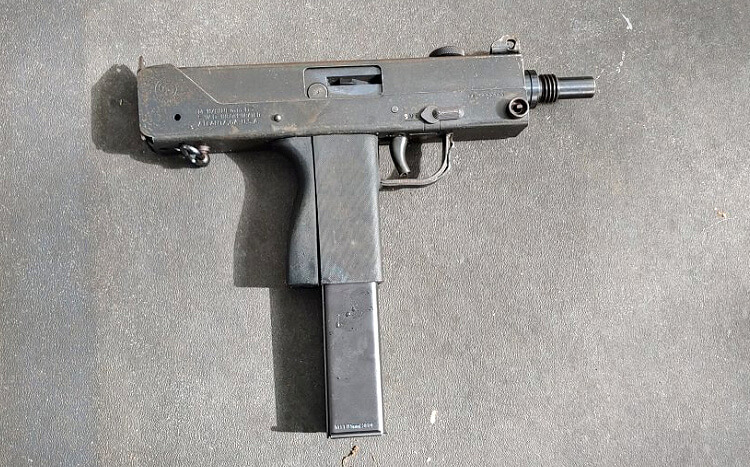 The MAC 11 was originally a 380 ACP SMG that was adorable, and the M11/9 is the 9mm variant. It is a blowback-operated handgun that feeds from a box magazine. The barrel is threaded for the obnoxious suppressor MACs were known for. The M11/9 was one of many variants of the MAC style pistols and was one of the more popular choices.

The TEC 9 has its roots in an SMG as well. This one was developed in Sweden by George Kellgren and was called the Interdynamic MP-9. When the SMG failed to sell, it was turned into a pistol and sold on the civilian market. The TEC 9’s history could be its own article, and it went through several name changes along the way. The TEC 9 series feature polymer frames, which was an interesting choice for the time. 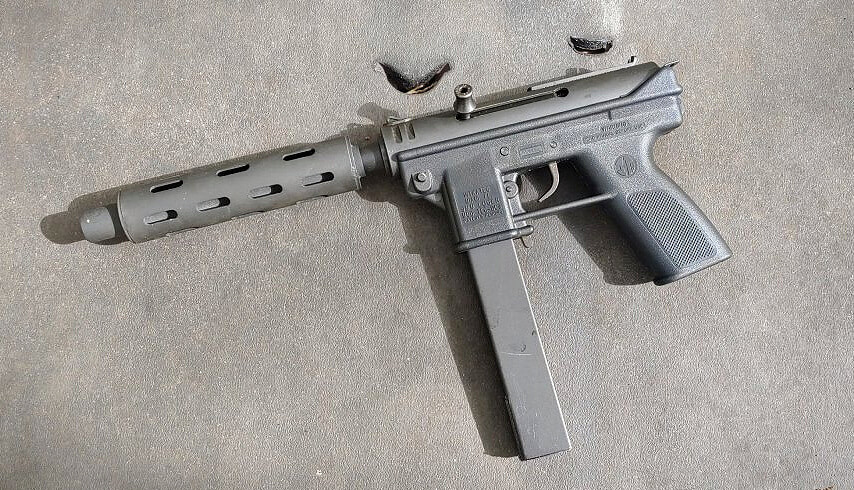 The TEC-DC9M has a removable barrel extension that allows the weapon to be much shorter than the original TEC 9. Although I’m not sure why anyone would want a smaller TEC 9, options are good, right? The TEC 9 is a blowback-operated pistol that feeds from a magazine forward of the trigger. These pistols were quite popular and inexpensive. Throughout the 80s and 90 over a quarter million were sold.

What They Have In Common

Before we get started on our MAC 11 vs. TEC 9 shootout, we gotta acknowledge what these two guns have in common. They are both blowback, semi-automatic, magazine-fed pistols. They are both 9x19mm handguns, and both have various magazine capacities available to them. One massive thing they have in common is the fact they were both guns hated by the anti-gun industry.

Both of these oversized, heavy, and ridiculous pistols are viewed with equal disdain among the anti-gun Karens. Karens typically judge things by how they look, and these guns sure look scary. Keep in mind they function no differently, in a practical sense, from a Glock 19, a SIG P226, etc. Because the anti-gun industry hates them, I love them and have wasted too much money on either of them.

So now that we’ve introduced the contenders, let’s dive into our MAC 11 vs. TEC 9 debate.

How do they guns handle? Both are not exactly stellar, but each has its strong points. Let’s start like you would in real life, and what’s the first impression you get when you pick the gun up. The TEC 9 has a much more comfortable pistol grip that’s semi-AR 15 like. The MAC 11 feels like you are picking up a two by four due to the magazine being stored in the pistol grip. 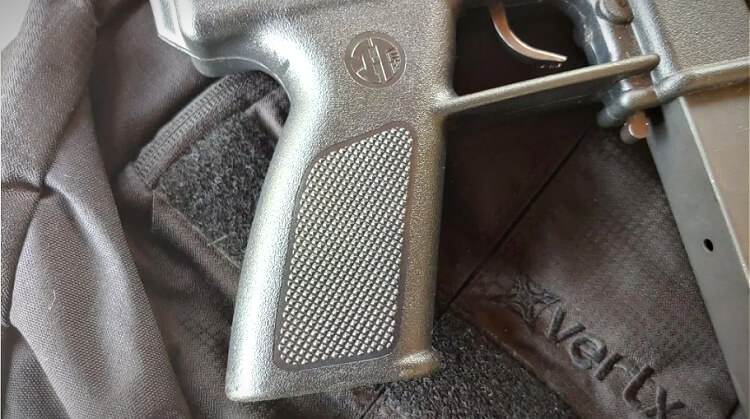 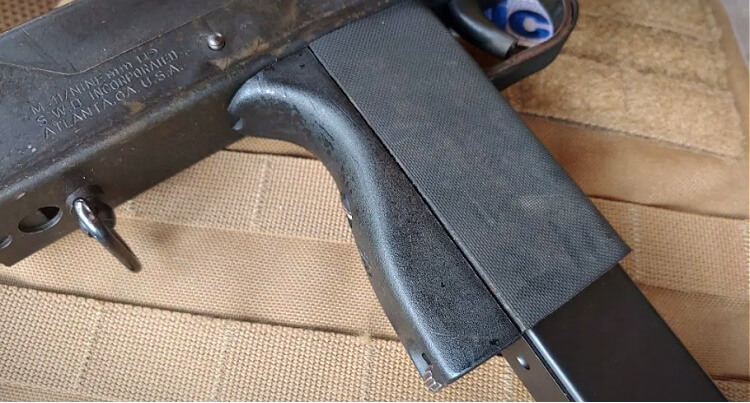 Our first tie in our little MAC 11 vs. TEC 9 battle is the weight. Both guns are stupid heavy for handguns. They are silly large and impossible to conceal. Even though they are huge, they have quite a bit of recoil. This is due to the massive bolts and the blowback operation. 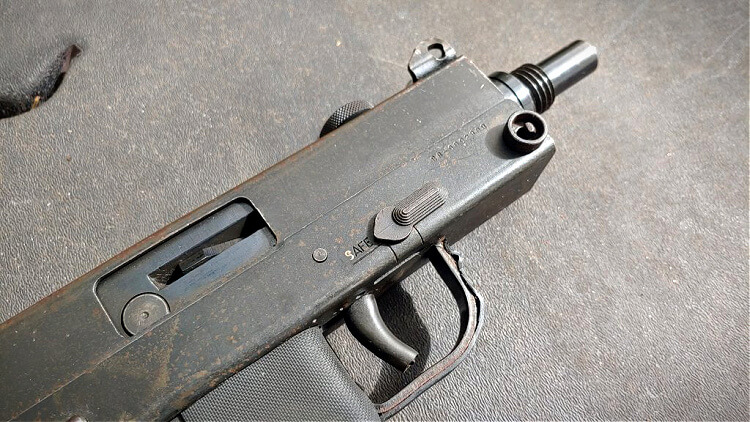 You’ll need a huge white sport’s coat to conceal either weapon and a sling to hold it tucked up and under your arm.

The next feature you’ll want to fiddle with is the charging handle. The TEC 9 is placed out on the left-hand side and is easy to grip and rip. MAC 11 goes a different way by using a circular charging handle place on top of the gun. The TEC 9’s charging handle is much easier to reach and engage.

Both guns have manual safeties, and here is where the M11/9 does a much better job. The MAC 11 uses a AR 15 like safety that is easily accessible by the trigger finger. The TEC 9’s safety is the charging handle. You have to press it down to engage the safety and pull it upward to take the safety off. 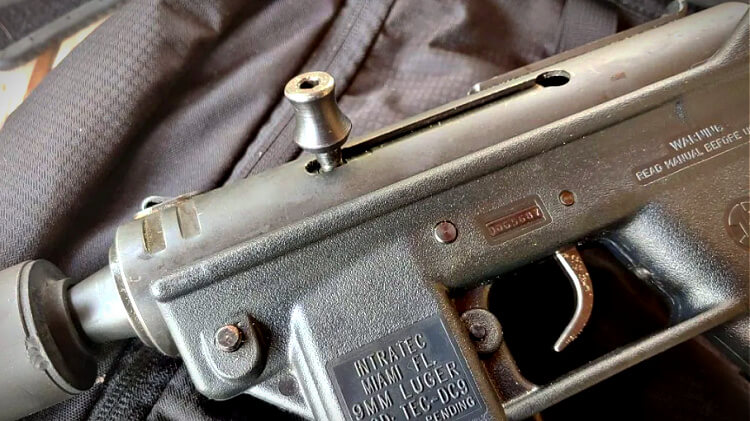 The magazine releases are pretty tied for being awful. Swapping magazines might be a little easier with the TEC, but not enough to matter. 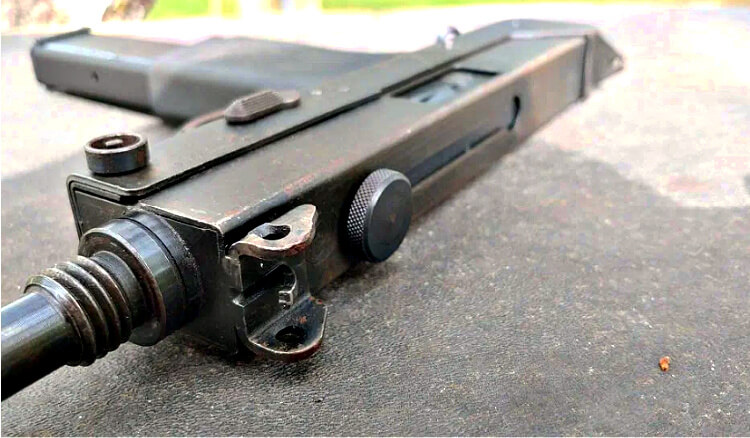 The most important piece of ergonomics is how does it handle while being shot sideways and held with a single hand? In that realm, the M11/9 is much more balanced due to its magazine placement. The bulky TEC DC9M is overly long and unbalanced for firing it with sideways with one hand.

Reliable as a Trans-Am

This is clearly the most important category in ou MAC 11 vs. TEC 9 battle, right? Well, the good news is there is a very clear winner. The M11/9 (MAC 11) is a much more reliable handgun. The TEC9 can’t chew through 5 rounds without a misfire or jam. The MAC 11 isn’t superbly reliable, but it can make it through an entire magazine more often than not. 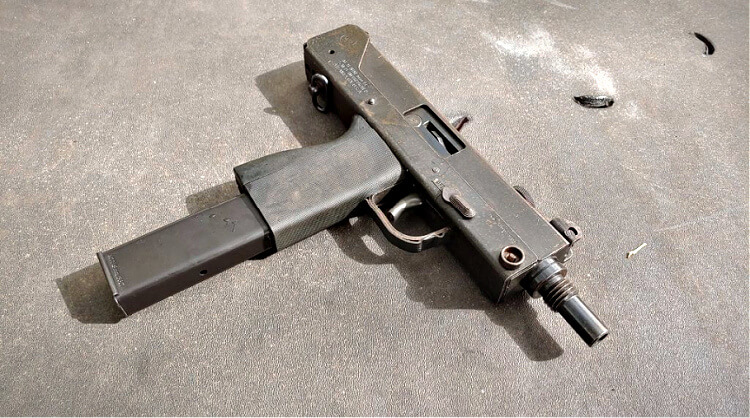 The TEC 9 is constantly jamming or failing to fire. The magazines suck and can be over inserted easily, and under inserted, but still locks in place. It’s a mess of a gun, and apparently, the TECs vary greatly in quality depending on the year the gun was produced. The TEC 9 runs worse than my first Glock 80 lower build.

When it comes time to start slinging lead, you want the gun to work. The M11/9 simply works better. If you are jumping through the air as you blast away in your midmorning gunfight, then you need a gun that keeps popping off.

Lol. Neither of these guns is very accurate, mostly due to the sights and horrid triggers. The M11/9 has a terrible trigger slap, so much, so the previous owner of mine tacked on a soft piece of foam. The TEC 9 has a long, weirdly mush trigger pull but is not painful. 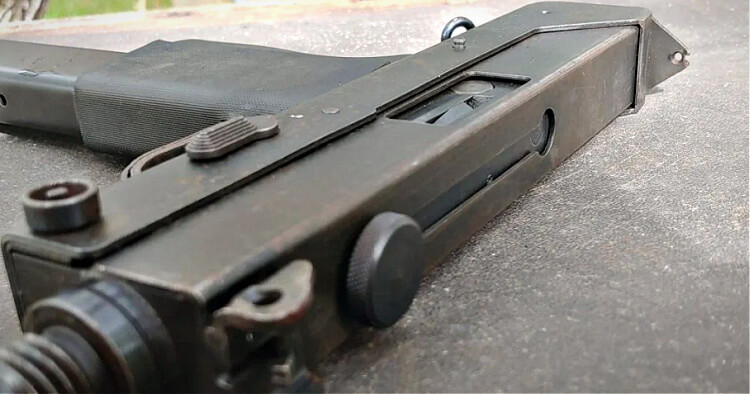 The sight blow, I can’t decide which is worse. The rear sights are small, and the front sights blend in with the rest of the guns and are difficult to actually see. Maybe they work better with a stock, but without one, they are terrible.

That’s not too big of a deal since you’ll likely be firing from the hip. Miami Vice has taught me that’s the most effective way to use one of these guns.

I could tie this to reliability at this point. How can a gun be fun if it doesn’t work? Admittedly these are both silly guns and are best for the range. Both can be fun as in a silly way, but the M11/9 actually shoots the majority of the time.

That makes a big difference in a frustration-free range trip. Both guns can be enjoyable, but I’m willing to bet you’ll shoot the MAC 11 more.

If I had to pick one of these guns to take to a fight, I’d choose the MAC 11. Admittedly, I’d rather have a Glock or a SIG, or any other standard handgun. Those guns are competitors, and in our MAC 11 vs. TEC 9 war, I’m proclaiming the MAC the winner because it actually goes bang most of the time.

The good news is we all win in our ability to own both, regardless of what all the anti-gun Karens say. Lastly, if you do own both, give in to the urge to dual wield and just do it.