James Bond has single-handedly sold more Walther PPKs than anyone in history. His relationship to the gun has been cataloged in film and literature, in comics, and in video games.

However, that’s not the only one of Bond’s sidearms. In fact, when you look at the novels and movies, he’s used a rather extensive catalog. Today we are going to dive into Bond’s sidearms that aren’t the classic PPK.

To be clear, I’m talking about the sidearms he’s either issued by MI6 or the guns he chooses personally. This article won’t count battlefield pickups as Bond’s sidearms because these aren’t necessarily guns he’s chosen, simply a hand he’s been dealt.

Long before the Walther PPK graced Bond’s belt, he carried the Beretta 418. This little fella fired tiny 25 ACP rounds and is described as customized for Bond. The barrel can equip a suppressor, the grips apparently removed, as were the sights. The Beretta 418 is a teeny tiny gun that would be quite easy to carry concealed.

Although it’s rather anemic, Ian Fleming chose it because it was the very gun he carried in World War 2. Bond carried the gun for several novels but ditched at the advice of a Bond fan named Major Geoffrey Boothroyd. Major Boothroyd suggested a revolver first, and in correspondence with Fleming, they decided on a 7.65 (32 ACP) Walther PPK.

In the first James Bond movie, we see Bond exchanging his Beretta for a Walther. However, Bond’s sidearms are a bit of a mix-up in the film. The Beretta is not a 418, but a 9mm Corto M1934. In the movie, they also state Bond is getting a PPK, but in fact, he’s handed a Walther PP.

The Walther PP chambered the 380 ACP cartridge and was a fair bit larger than the PPK. The PP is still a compact firearm by today’s standards. But the PPK is decidedly smaller. Major Boothroyd was written into the film and oversaw this exchange of firearms.

He tells Bond, “Walther PPK. 7.65 mil with a delivery like a brick through a plate-glass window. Takes a Brausch silencer with very little reduction in muzzle velocity. The American CIA swear by them.”

In the hilariously named Octopussy, we see Bond in 1983 wielding the Walther P5. He trades his PPK for the Walther P5 reportedly because Walther wanted to show off their new gun. Bond exclaims that he “mislaid my PPK.” Bond’s sidearms grew by one Walther in Octopussy, and admittedly the P5 would be a better fighting pistol than the PPK.

Instead of 7.65 rounds, Bond was spitting 9mm pills at baddies. The gun ditched direct blowback for a softer short recoil operation but did keep the DA/SA design Bond would have been used to with the PPK. The P5 proved to be an excellent and reliable pistol for the time but never gained the same level of fame as the PPK.

Beginning in Tomorrow Never Dies and continuing through Brosnan’s run as Bond and into the first Craig movie, we see the Walther P99 become Bond’s sidearm of choice. Of all Bond’s sidearms, this is the most practical choice for a duty pistol, but it’s rather large for a spy. The P99 is a conventional duty pistol with a 15 round magazine and a full-sized, polymer frame.

The P99 features an awesome trigger. It’s a striker-fired design with a DA/SA setup. It’s rather rare to see a gun feature this combination but again would have been a natural swap for Bond. The P99 served Bond rather well through a multitude of movies and kept the relationship between Bond and Walther solid.

Bond did go back to the PPK in Quantum of Solace.

In 1981 the Bond Book Licence Renewed premiered with Bond now wielding the FN M1903 as his pistol of choice. In the novel, the 00 section is abolished, and the Walther PPK is reportedly banned by the service. So he chose the FN M1903. As far as Bond’s sidearms go, this is a dumb one, and the fans reacted as such. In 1903 this was a great pistol, but the novel takes place in the 1980s.

The M1903 is a single stack 9mm handgun that’s roughly the size of a Glock 17 but holds only seven rounds. Keep in mind, Bond could choose a modern Beretta, Browning Hi-Power, or, well, anything made in the 80s and have roughly the same size gun with more firepower.

I wasn’t the only one to think the M1903 was a bad idea, and in the next novel, Bond wielded the ultra-modern HK VP70. The VP70 was the very first firearm to utilize a polymer frame. Military and police models offered a detachable stock that also allowed the gun to fire a three-round burst. Without the stock, it was semi-auto only.

The VP70 was short-lived as one of Bond’s sidearms and honestly wasn’t a great gun. It used a blowback operation that created excessive recoil, and the double-action-only trigger sucked. The direct blowback action necessitated it be larger than necessary and the deeply cut rifling vented gas past the bullet. This lowered the velocity of the 9mm to roughly that of a 380 ACP. It was a modern but crappy gun.

Again Bond swaps pistols and goes with the HK P7. This single stack 9mm uses the famed squeeze cocker design. As far as Jame Bond’s sidearms go, this is the only one equally as classy to the PPK. The P7 was a fantastic firearm with a unique gas-delayed blowback system.

The P7 proved to be lightweight, accurate, reliable, and very safe. In fact, German police complained when it was replaced in the 2000s. Bond wielding the P7 makes a ton of sense, and if this remained his gun, I could see why.

Once more, Bond’s sidearms list grows with the next novel, but luckily this choice stuck around for 11 novels. The ASP 9mm is a heavily modified S&W Model 39. A man named Paris Theodore built these things to be the ultimate concealed pistol. The gun feature a shortened slide and barrel, smoother corners, a Guttersnipe sighting system, clear Lexan grip panels, and a skeletonized magazine.

Shooters could easily see their remaining ammo, and the gun was very easy to conceal. It was reportedly popular with spooks in the CIA, and Bond choosing one makes sense. Paris Theodore was quite the character and was known for his spy-like creations. The ASP fits well in Bond’s arsenal.

In the novel, Carte Blanche James Bond goes back to Walther with the PPS. The PPS was one of the first modern single stack 9mm handguns designed for concealed carry. It’s incredibly thin and easy to conceal with 6, 7, and 8 round magazines available. The Walther PPS fits in the same category as the PPK but is much more modern.

Bond’s sidearms vary widely in size, shape, and caliber, but the Walther PPS makes the most sense for a modern Bond. It’s easy to hide but capable for a fighting man. It’s a sweet pistol and one of my favorites in the single stack 9mm category.

In three novels, Bond references his car revolver. You see, he often keeps a powerful revolver in the glovebox of his Rolls Roye, Aston Martin, and Saab for special occasions. The first is the Colt Army Special in ’45 Colt’, and the second a Ruger Redhawk 44 Magnum.

The Colt Army Special reportedly wears a six-inch barrel, and the novel claims it’s a 45 Colt, but this particular revolver never chambered 45 Colt. These revolvers did prove popular for police use and became favorites of the NYPD, LAPD, CPD, and the FBI.

In 1981’s Licence Renewed, we see Bond revisit the car revolver with the very powerful Ruger Redhawk in 44 Magnum. He uses the gun efficiently in a car chase, and I’d imagine the big 44 magnum rounds peel through aluminum and glass when needed. The Redhawk is a very stout magnum revolver famously used for hunting and bear defense. It’s a modern choice and makes sense for its purpose.

Neither revolver is an officially carried part of Bond’s sidearms, but they both bear mentioning as he did choose these guns for this role.

The poster for the latest film has James Bond carrying a P226 and a thigh rig, but until the movie comes out, we can’t really know what he’ll pack. However, let’s look beyond the movies and think what a modern Bond would carry. Sure the PPK is cool, but if Bond got his 00 rating today, what gun would fill his hand? 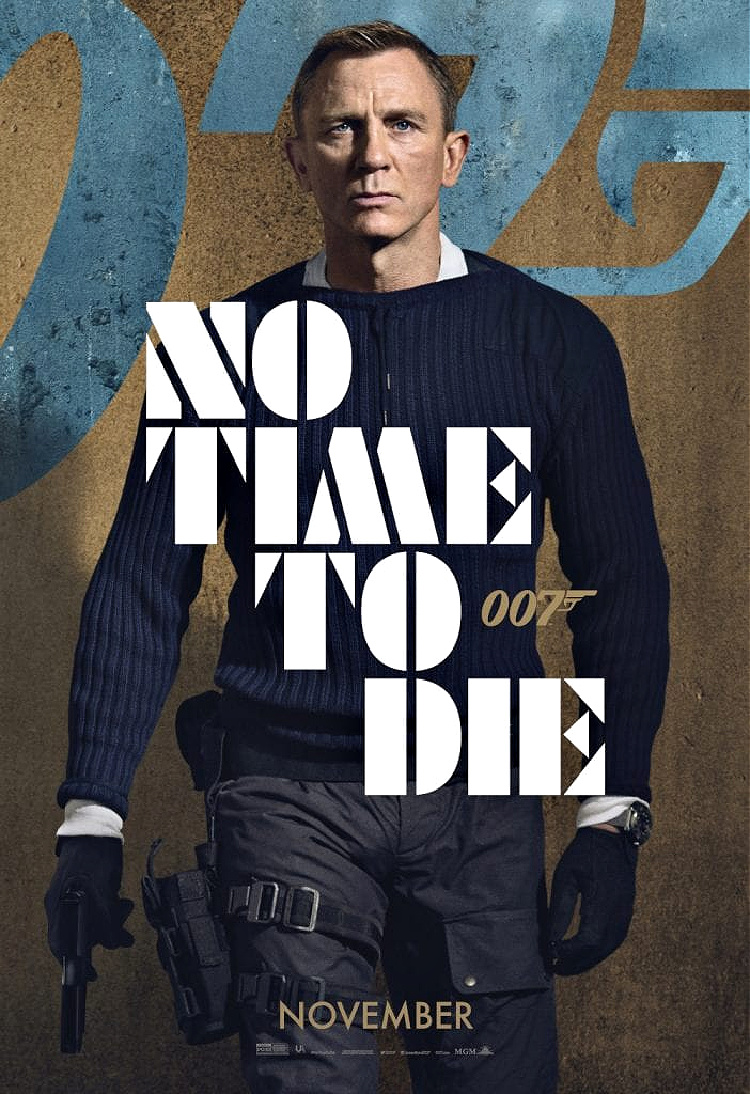 If I was Bond, I’d pick the P365 with a milled slide and a Holosun 407Kor 507K optic. It’s a small gun that packs 10 to 15 rounds depending on chosen magazine size. Bond likes cutting-edge tech, and an optic makes sense. Add on a True Precision threaded barrel for a suppressor, and we have a very capable but easily concealable gun.

Bond’s sidearms come in all shapes and sizes, but I think that would work best. What about you? What do you think James Bond should carry?

Also, did I miss any of Bond’s sidearms? If so, let me know below!