For many years, the .30-30 Win cartridge has been considered a top deer round. However, many modern hunters have moved from traditional bolt and lever guns to semi-automatic firearms like the AR-15. In these guns, the .30-30 is no longer an option. The cartridge is simply too long, and its rimed case would be a bear to work with in an AR. But is 7.62×39 hunting ammo a suitable cartridge for replicating the performance of the classic .30-30?

Let me say that the two rounds do not offer identical performance. Each cartridge has its own performance advantages and drawbacks. It is quite possible that hunters used to shooting the .30-30 may not care for the performance of the 7.62×39. On the other hand, many other shooters will prefer the 7.62×39. Let’s take a quick look at the suitability of the 7.62×39 for hunting.

This article originally ran in March of 2017; with hunting season upon us, it seemed like a good idea to bring it back.

Of course, each load, especially if you work up your own, is different. However, in very general terms, the .30-30 has more muzzle energy that the 7.62×39. However, the 7.62×39 tends to retain more downrange velocity and energy. This is partially because the .30-30 is typically loaded with flat or round point bullets that are not ballistically ideal. For shots at about 80 yards and out, I would expect the 7.62×39 to hold an advantage. Some modern loads, like the Hornady Superformance line, can shift the comparison making the .30-30 more attractive.

For the 7.62×39, there are more hunting ammo loads on the market than you might realize. Both Winchester and Federal (Fusion) make 123 grain soft point ammo for hunting, and many people report good results with these. Corbon loads the all-copper 123 grain DPX bullet in a 7.62×39 load that is also reported to perform well on deer-sized game.

I’ve been told by a friend that does quite a bit of hunting that the DoubleTap Ammunition load with the 123 grain Barnes TSX bullet is quite good in the field. He said the round performs well on white tail and pigs alike. Accordint to DoubleTap, the load makes for 2,400 fps from an SKS (20” barrel) and 2,280 fps from an AK-47.

Ok, you like the caliber, but don’t know what gun to pick for hunting? Well, there are a few bolt-action rifles chambered for the caliber including the recently introduced MiniAction rifle from Howa. These rifles are an amazing value, especially the scoped packages that include a Nikko Stirling Panamax 3-9×40 optic. With a 20” lightweight barrel, these guns are quite handy in the field. Should you prefer a longer barrel, a 22” standard profile barrel is available. Also, a 20” heavy barrel version is offered by Howa.

Even though I really like the Howas, most people will be using a modern sporting rifle for this caliber. I understand – I own several long guns in the caliber.

The SKS is a popular deer gun, though with fewer of the rifles being offered for sale, and at higher prices than in the past, this rifle is starting to wane in popularity. Unless you put a sporter stock on the gun, the SKS is a bit heavy with the wood furniture. That may be a factor for you.

An AK-pattern gun can make sense, though equipping it with an optic can be a pain. Also, like the SKS, they tend to be heavy. While some people suggest the AK-pattern rifle is not accurate enough for hunting, I beg to differ. At 100 yards, most of these guns are more than accurate enough. In my area of the world, a 100-yard shot on a deer or hog is pretty rare. Most of the time, I’m look at 50-60 yards.

Just keep in mind that hunting regulations probably prohibit you from taking to the woods with 30-round magazines. So, be sure to get some low-capacity mags like these Bulgarian 5-round magazines.

Although it may seem a bit odd, I think that 7.62×39 hunting ammo makes the most sense for hunting with an AR-pattern gun. While slightly more difficult to initially set up than some other calibers, I think it is worth the effort.

To convert a standard .223/5.56 AR, you will need a new upper, bolt and magazine. Fortunately, all of these are plentiful. I recommend getting a bolt that includes an extended firing pin. These will help ensure reliable ignition of hard military primers. Additionally, going with a heavier hammer spring will help. 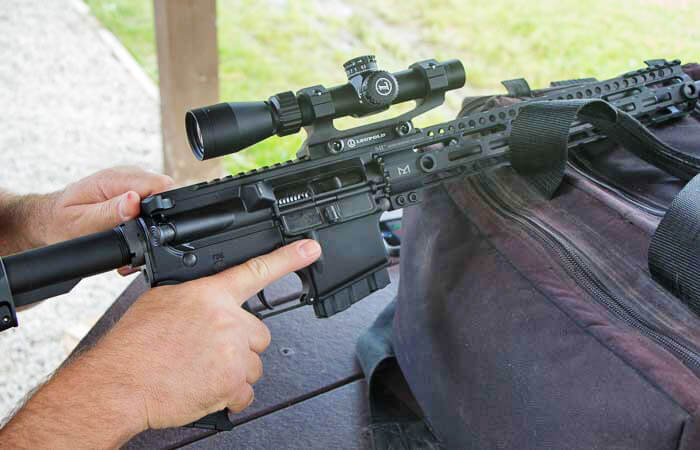 Although there are other options, I like the 7.62×39 ASC 5-round magazines. I’ve got five of these and have found them to be very reliable.

Some of you might suggest that the 300 BLK cartridge will offer similar hunting characteristics without the need for a special bolt, magazine or hammer spring. You would be absolutely correct. However, 300 BLK ammo is also very expensive when compared to a lot of 7.62×39 ammo. While hunting rounds are going to be close in price, practice ammunition for the 7.62×39 is a fraction of the price of 300 BLK. I guess it is just a matter of going with what you like.

For me, I built an AR in 7.62×39 for hunting. With a Leupold 1.5-4x 20 scope, the gun has been a great performer out to 100 yards. Recoil is a little more than a 5.56 NATO rifle, but noticeably less than a bolt gun. Even though I keep 5-round magazines with it for hunting, I also have standard capacity 30-round magazines for use in a home defense situation.

So, have you hunted with the 7.62×39 cartridge? What kind of results have you had? Any suggestions for anyone trying out the caliber? Leave a comment below!