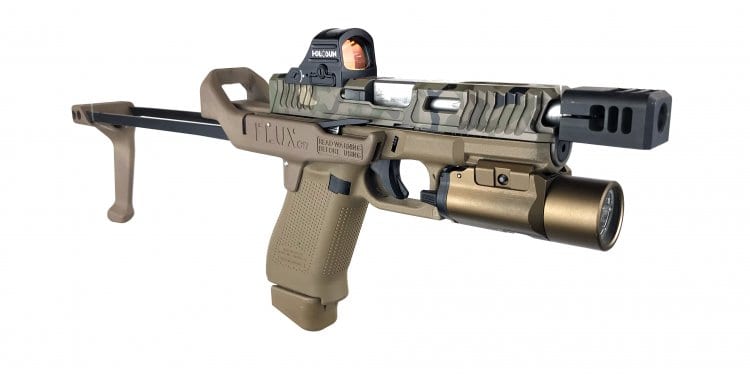 Stabilizing braces on handguns have lit a fire in the firearm industry. A whole host of firearms have been made or imported solely because the stabilizing brace has made them practical and not just a novelty. Most pistol braces are designed for large frame handguns like an AR-15 style pistol where it is very challenging to hold one one-handed and fire it while maintaining control and practicing safe gun handling. FLUX Defense thought this level of stabilization was missing from one of the most popular handguns on the planet, the venerable Glock. 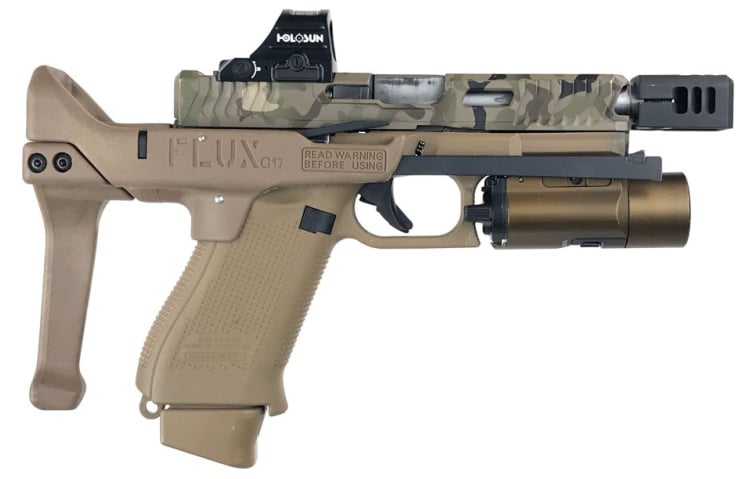 I acquired a tan FLUX brace and decided to add it to my Glock 19X. Installation is relatively straight forward. You attach the FLUX brace like you add a beavertail grip extension. You remove the rear trigger housing pin and replace it with the one FLUX provides for you. 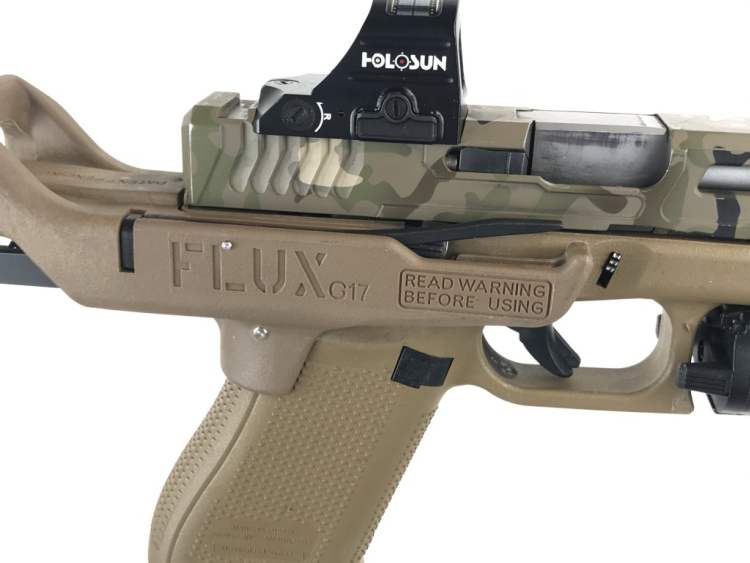 Once installed I immediately discovered some drawbacks to the FLUX brace design. The body of the brace mount is rather proud on the right-hand side of the gun. This is to house the sliding bars as well as the release/catch mechanism for the bars. I cannot get my trigger finger up high otherwise it hits the underside of the FLUX brace body. Another slight issue is that the release/catch lever pushes up against the ambidextrous slide release of the Glock 19X. This imparts quite a bit of friction that the release/catch does not really catch the brace bars and I have to manually force them down to lock the brace bars in place. 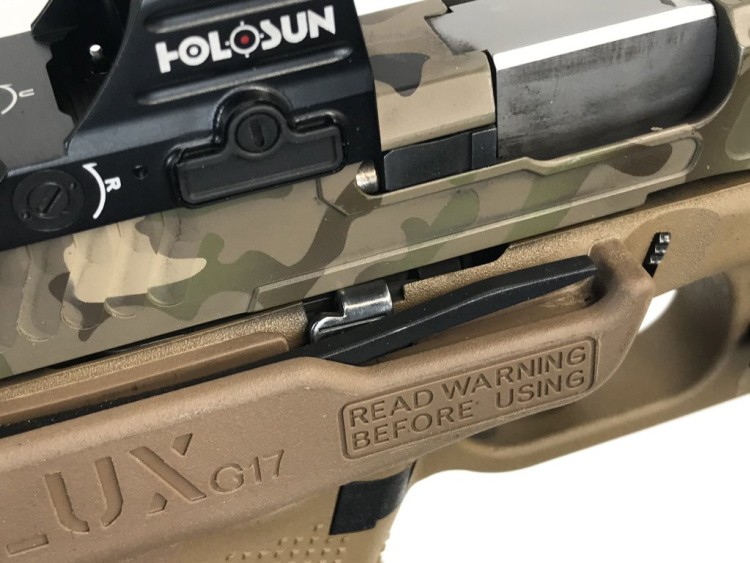 The same applies when I collapse the brace. The latch does not close properly due to the ambidextrous slide stop. So I have to push it down while I close the brace. 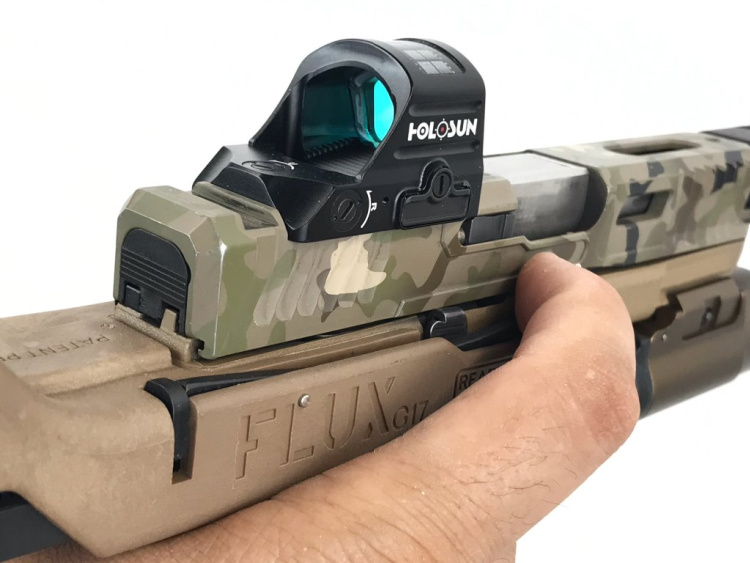 The blue spring is what pops the brace out when you deploy it. 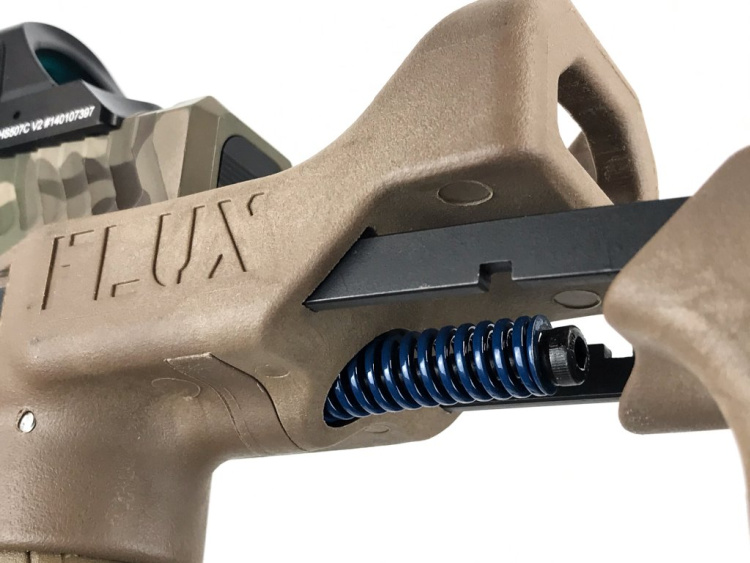 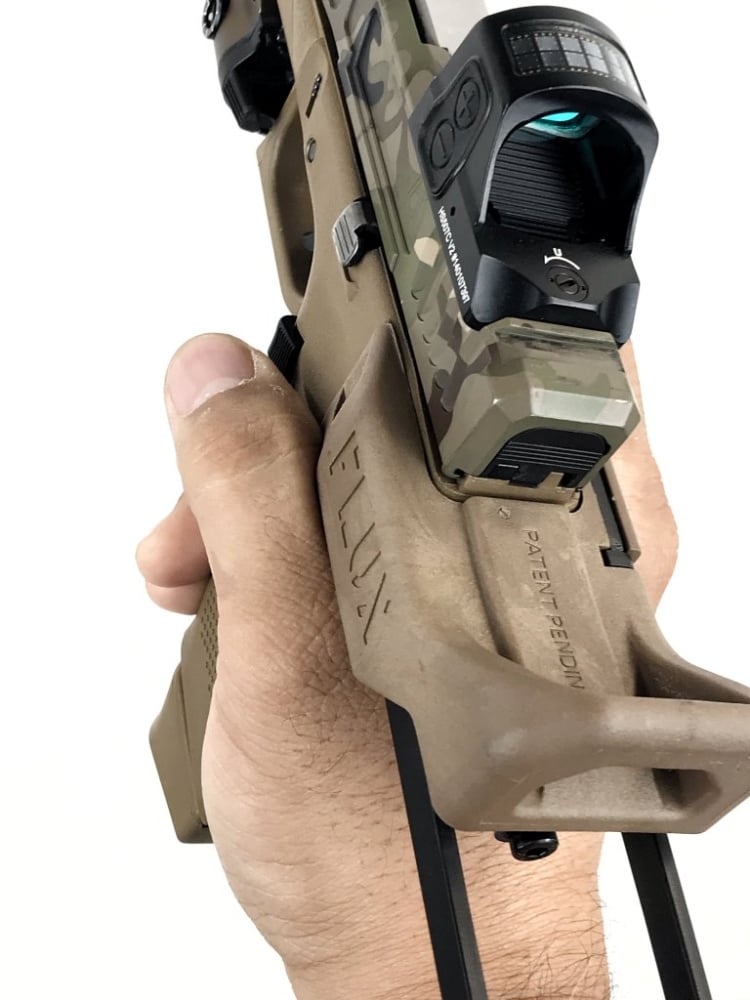 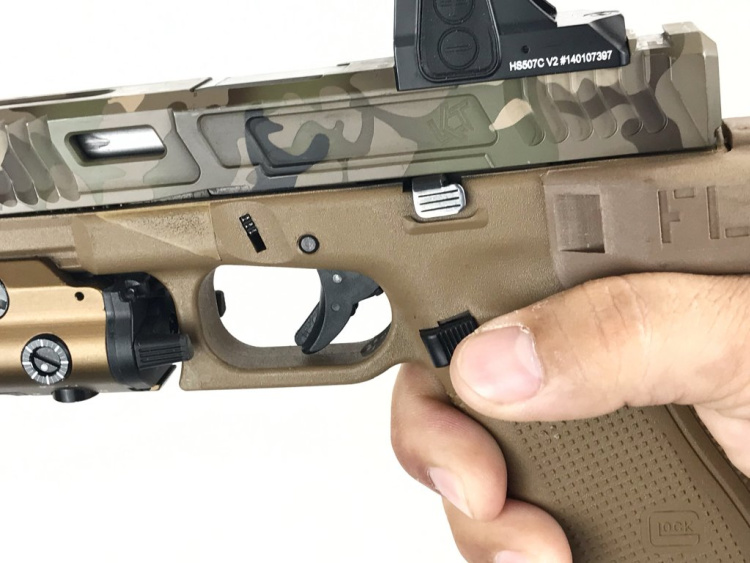 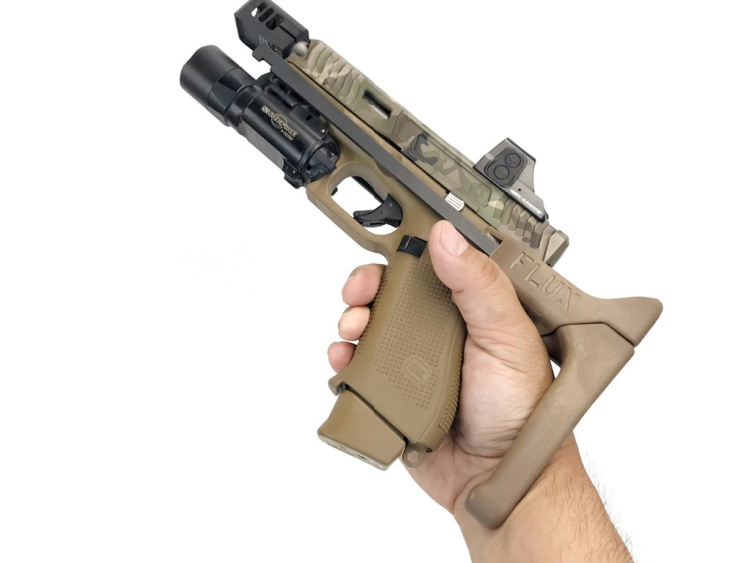 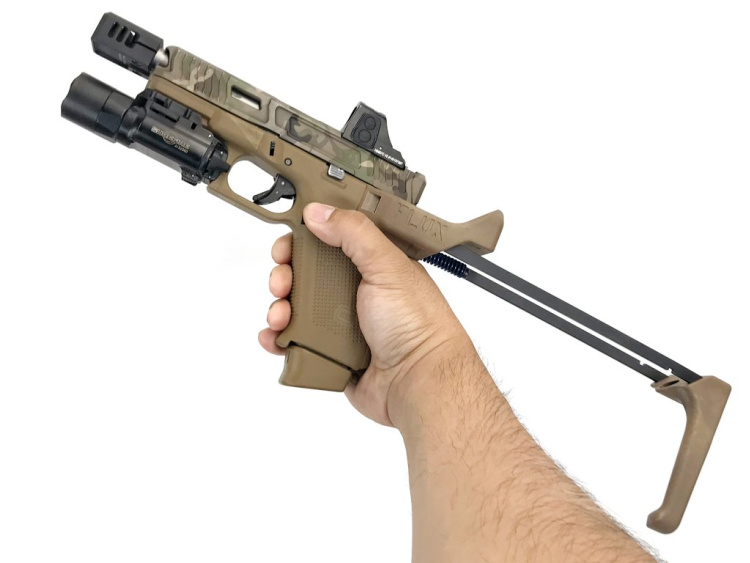 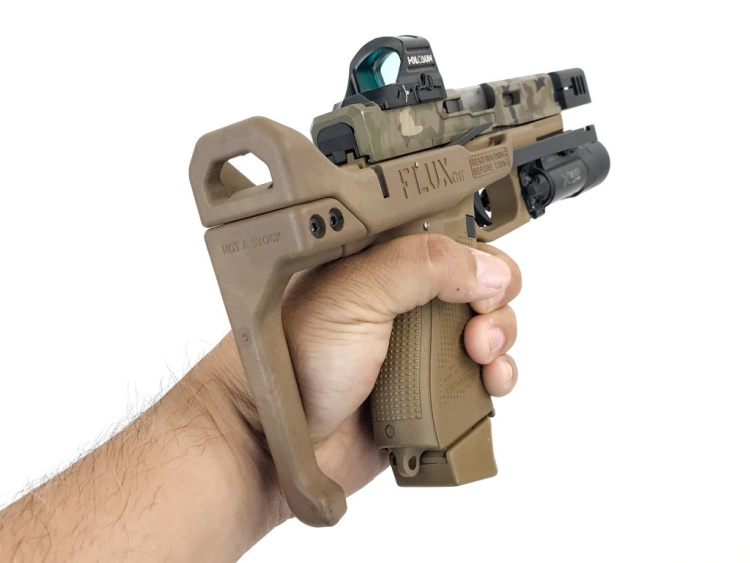 The FLUX Brace is not ambidextrous. Shooting it and manipulating it with my left hand proves to be difficult. The arm brace is curved to go up against the inside of the shooter’s right arm. If you have to shoot your Flux brace equipped Glock, it is easier to deploy the FLUX brace with your right hand and then switch to your left hand. For those of you who are left-handed/left-eye dominant, FLUX makes a mirrored left-handed version of their brace.

The length of pull on the brace is rather short. This means the back of the Glock is a lot closer than you would normally shoot it if you use a typical two-hand grip or even a single hand presentation. This close proximity to the face is generally not an issue unless the brace bars did not lock into place properly. This can result in the rear of the brace collapsing prematurely and hitting you in the face. Shooting with a compensator or a suppressor is not pleasant with the gun so close. You feel a lot of muzzle blast concussion and in the case of suppression, you will be eating a lot of gas blowback pressure from the suppressor out the ejection port and into your face and eyes. 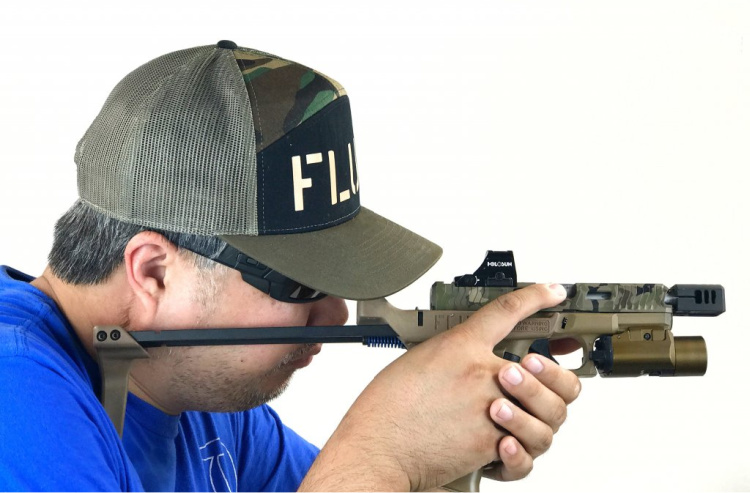 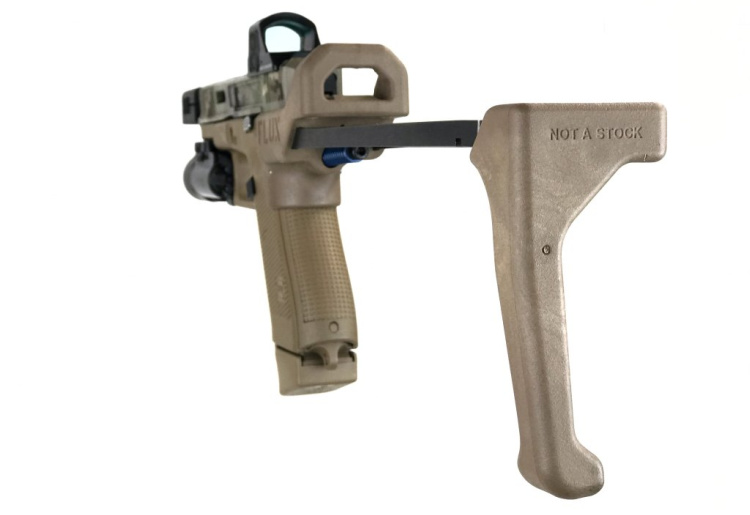 One of the biggest problems I had with the FLUX brace is aiming the Glock while bracing and cheeking it. My facial structure will not allow my eyes to get down low enough to use the iron sights. Even if I could physically get the irons into my field of view, I would not be able to focus on the front sight. It is too close and while I have 20/20 vision, my eyes have aged and cannot focus on objects that close. So the solution is a slide-mounted red dot.

I originally had a Trijicon RMR on my modified 19X slide. But it was still a bit low. I had to really shove my face down onto the brace bars to see the dot. So I swapped the RMR out for a Holosun HS507C V2. The taller optic is more forgiving and easier to see the aiming reticle. A minor concern but worth noting, due to the position of the brace bars when collapsed and the shape of the FLUX brace housing it is not possible to use frame mounts for optics like the ALG 6 Second Mount.

FLUX did make a holster for a FLUX brace equipped Glock however it is rather limiting. It cannot accommodate a flashlight even though most weapon pistol lights for Glocks have no issue clearing the brace collapsing bars. 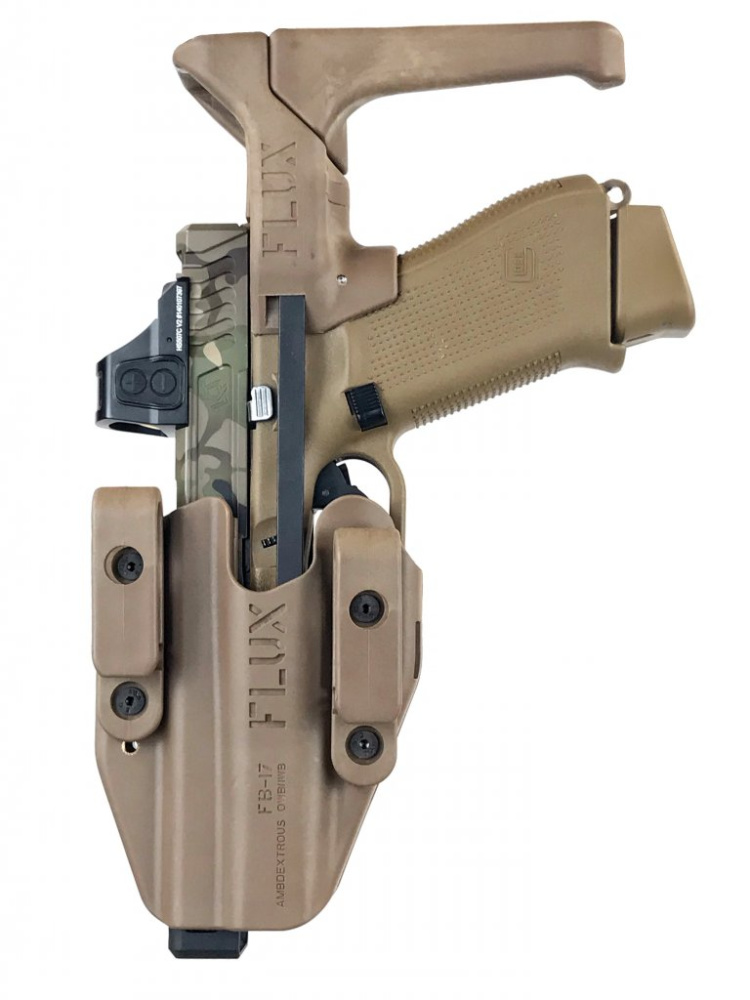 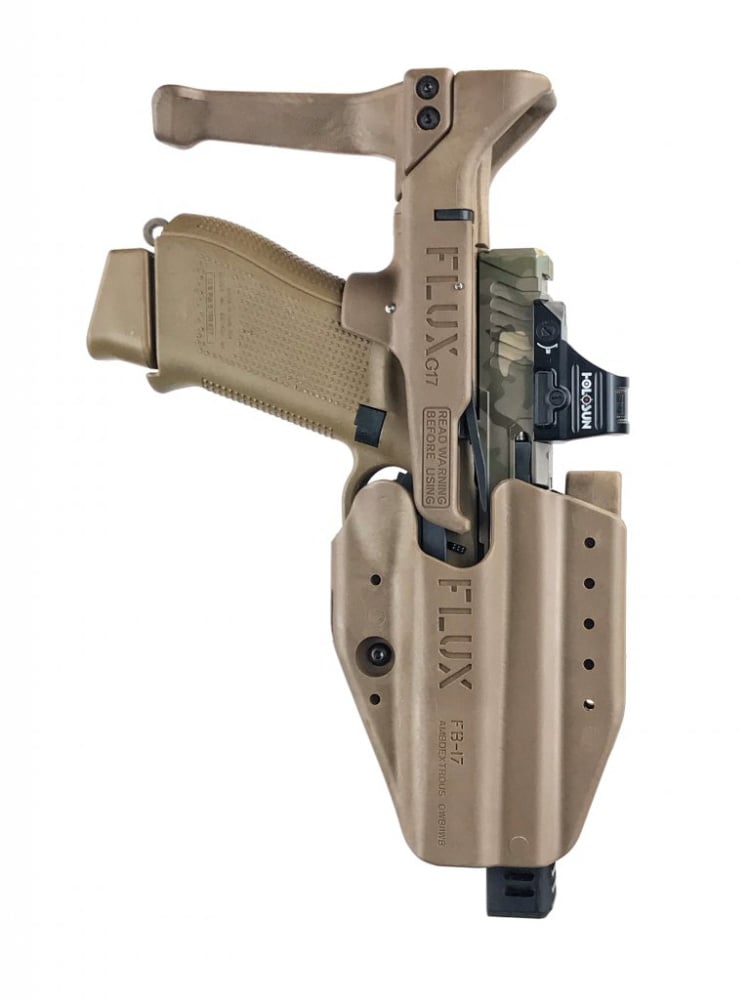 While not perfect, the Blackhawk Omnivore holster can accommodate a Glock with a FLUX Brace. The Omnivore locks onto a specific weapon light. In this case, I am using the SureFire X300 compatible Omnivore holster. While the Glock fits with the FLUX, you cannot collapse the brace since there is no room for the brace bars. 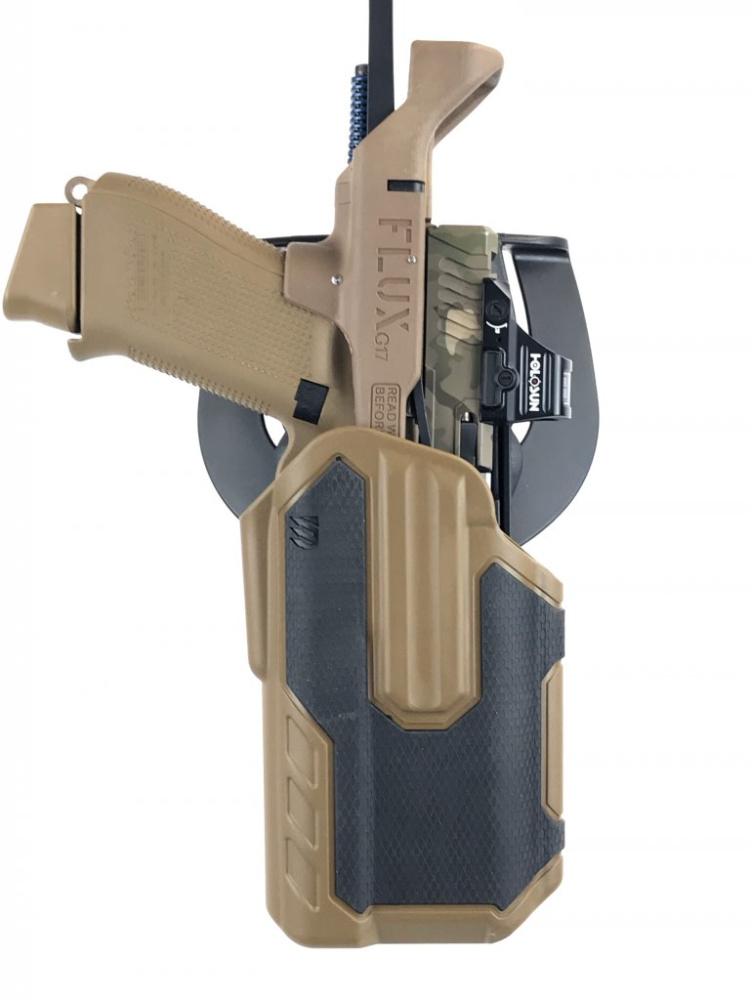 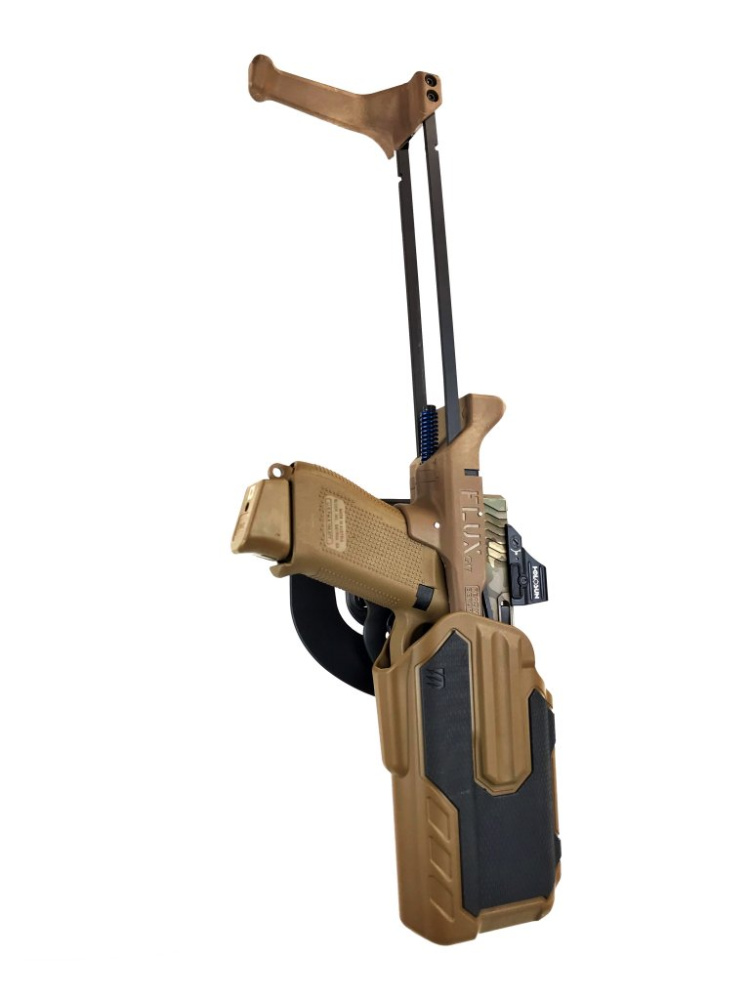 Due to the thickness of the FLUX brace housing, it does interfere a bit with my thumb reaching the thumb-activated release for the Omnivore holster. 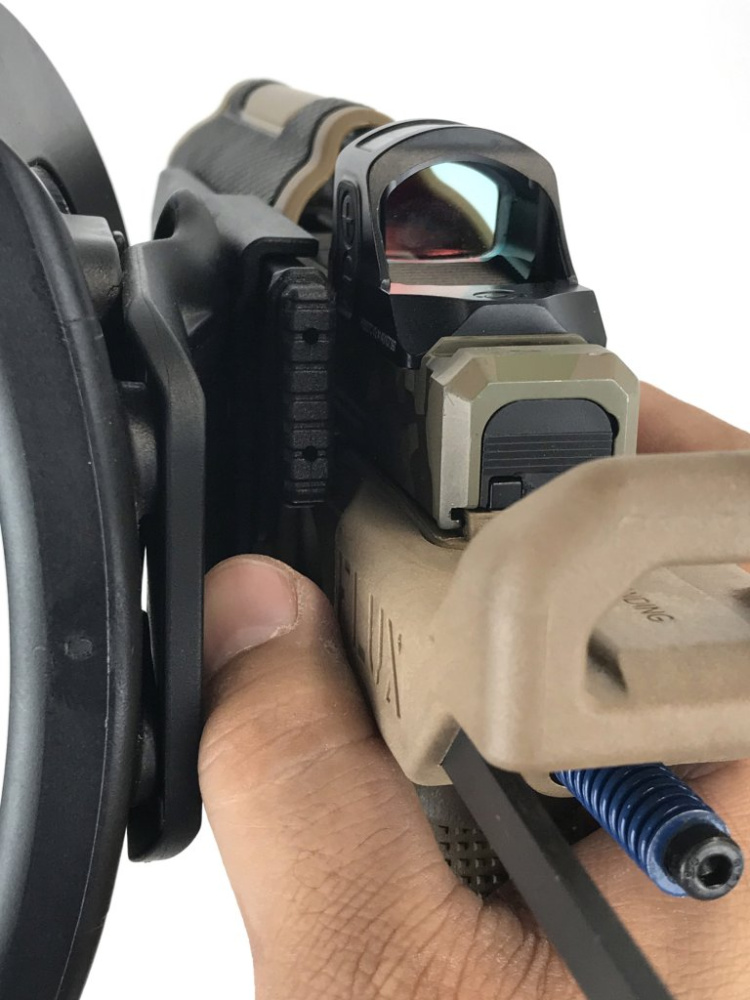 While there are a few issues with the brace, it is a great concept. Small PDW weapons like the B&T USW have folding stocks and are rather pricey at over $2,300.

With a FLUX Brace, you can convert a Glock into a similar weapon system. It is more compact than any other brace PDW option like a CAA Roni or FAB Defense KPOS Scout. If you are interested in a FLUX brace design then I recommend checking out their MP17 for the SIG P320. It is slightly bigger but has a fixed optic mount — something the Glock FLUX brace does not allow for. I found shooting the MP17 at SHOT Show 2020 more pleasant than my Glock with a FLUX Brace. Sadly the FLUX is extremely popular and they are often sold out. So check the Flux Defense website often if you want to snag one of these up.