When you think of “big” handguns, it’s hard not to mention the Magnum Research Desert Eagle 50 AE. I’ve been tinkering with one, and here’s the downlow.

The Desert Eagle 50 AE is a semi-automatic pistol that operates more like a rifle. The barrel is fixed – it doesn’t move during recoil. This allows the “Deagle” to have a top rail over the barrel. There is a slide that contains a rotating bolt system sort of like those on AR series rifles. Also, like those, the system is gas-operated. All of this manages the power of the 50 AE round and creates a workable semi-automatic design.

The Hornady Custom 50AE cartridges are enormous, almost 1.6 inches tall. It would leave a mark if someone threw one at you. Due to cartridge size, the single-stack magazine only holds seven rounds. The ambidextrous safeties allow you to safely carry one in the chamber for a total capacity of eight.

This pistol falls squarely into the category of… why not? Some people like sports cars, others trucks, others still those ones that ride low and bounce. It’s the same with handguns I suppose.

The Desert Eagle is all about big. I have size large hands and it’s hard for me to get a proper grip. I can reach the trigger with ease, but let’s just say there’s lots of exposed grip on the support side. Flipping the frame-mounted safety up to fire is doable with the firing hand, but it’s a stretch. When you do reach the safeties, they feel heavy and industrial, consistent with the overall “big” everything theme.

How does it feel to shoot? The picture here tells a thousand words, but let’s just say it’ll wake you up in the morning! It didn’t inflict real pain with every shot, but after shooting some groups my hands were somewhat red from the repeated recoil. If you hold on tight, it’s still gonna muzzle flip, but not uncontrollably so. As for dual-wielding with one in each hand like the movies? 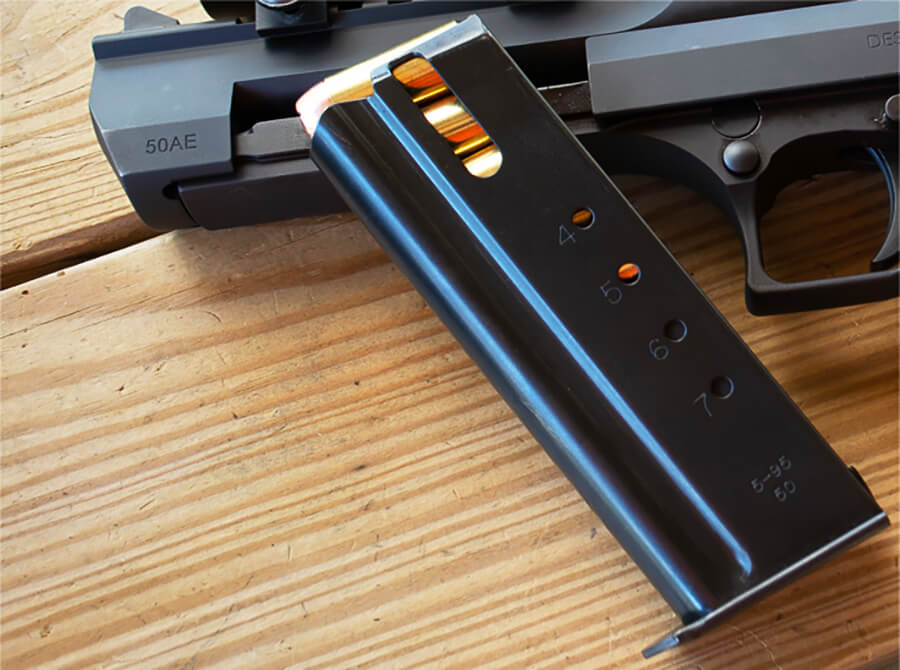